Like many a suburban white girl looking to rebel, I celebrated my eighteenth birthday with a tattoo. Not as a middle finger to my parents—who both came along to watch—but a disruption of expectations. Tattoos belong on cooler people than me. (It bothers me, for example, that the grammar in that sentence was wrong, and that I have to leave it because “cooler people than I” is a bridge too far.) But I liked the idea of wearing something I love permanently. It felt bold and surprising, unfamiliar sensations for the risk averse. And if nothing else, I’d have proof that I once survived an experience not everyone can handle. I hadn’t realized that cerebral palsy means I do that every day.

I chose a treble clef on my right hip with the rationale of a lifelong choir kid: “I’ll always like music.” I’m happy to report that is still, as of this writing, true. But the landscape shifted between tattoos one and two. I experienced my first full-scale bodily betrayal, an out-of-nowhere spinal fusion surgery, and was riding out a ripple effect that would take years to settle. I could sense that my body would not be denied and that I should probably start getting to know it. That maybe it was time to explore its dark corners.

I wanted a design that spoke to disability without hitting it on the nose. I’m just not the kind of person who can pull off the International Symbol of Access (you know it from parking spaces), the wheelchair heart, or this little guy as body art. Not a chance. Maybe it’s that I’m not a wheelchair user, but those images don’t do it for me. They feel too generic and easy. They’d get the point across as tattoos, but say nothing about my actual experience in this body. I needed something more individual and complicated, like CP itself.

Jillian Weise’s The Amputee’s Guide To Sex is one of the few books I remember receiving for the first time. A college friend put it in my hands the summer before senior year because she could tell I needed it. I was so fragile then. The surgery still felt too real and like it might not stick. I’d been kicked out of my body and not yet moved back in. So I honed my mind while staying physically adrift. It was kind of like living in a museum—look, but don’t touch.

I think that’s why I found Weise kind of brutal at first. She was so honest; all the fear, pain, rage, and doubt I swallowed without acknowledgment, she just put right out there. She wasn’t hiding. She had no shame, or no shame about her shame. I’ve never been much for poetry, but hers punched me square in the stomach. It was everything I felt but wasn’t ready for.

I barely noticed “Erase,” the forty-second poem in Amputee’s Guide, when I devoured the book in one night. It’s easy to miss amidst the pieces about sex or a suicide from being “always in pain.” Those have the shock value to linger; they’re visceral and unapologetic, and I wasn’t prepared. I didn’t get “Erase” yet because I couldn’t. This is back when words like “despite cerebral palsy” still felt natural for me to think and say and hear. But when I cracked open Amputee’s Guide on the tattoo hunt, there it was:

It is not you who keeps me
in hiding while you walk
nude through the house.
This will not change,
in the thick of things we are.
If I am to explain, then
I must go back to the family
dinner when I am nine,
when I meet Otis for the first
time, an uncle who wants
to know about me, but not
how I’m doing in school.
He wants to see the body
up close, unfamiliar.
I am told to unbutton
so everyone can see where
they stuck ribs in and stitched.
Otis recommends Vitamin E
for erasing parts of the body
that bother other people.

The suggestion that you manicure your disability (like you’re plucking your eyebrows or fixing your hair), the hungry curiosity, the gut reaction to stay “in hiding” while everyone else “walks nude through the house”—I’ve felt all of that, deeply. Sometimes I do it to myself. That’s the ableism I know: benevolent, well-meaning, even familial. The kind that everyone understands is wrong almost never happens to me. No one yells at me on the street, I’m not being denied social services or lifesaving care, and walking means that I can access most spaces (if not always on the first try). Instead, I get pity dressed as compassion. I get “I forget you’re disabled!”, glares for not giving up my seat on the train, and congratulations on being “so close to normal” (yes, that’s an actual thing somebody said). Able-bodied strangers ask “what happened?” not as an accusation, but in a way that invites sympathy. As if I’m going to say “yeah, it sucks, doesn’t it?”. They expect common ground. I look and behave and sound and succeed so much like them that I get an honorary spot on the team. That’s what ableism looks like filtered through privilege: an invitation to distance. Vitamin E for erasing parts of the body that bother other people.

I am not the one who’s bothered. Inconvenienced? All the time. Exhausted? I need a nap pretty much every day. But having cerebral palsy, and the body it built, does not bother me the way people seem to think it should. It would be easier for them if I was ashamed or wished for “better.” But I’m not myself without this body, and you know what? I like myself. I’m not supposed to, and getting here was scary and took a long time but now that I am, I don’t plan on leaving. I don’t need the Vitamin E; they do. So I put it where they can see it and I can remind myself. 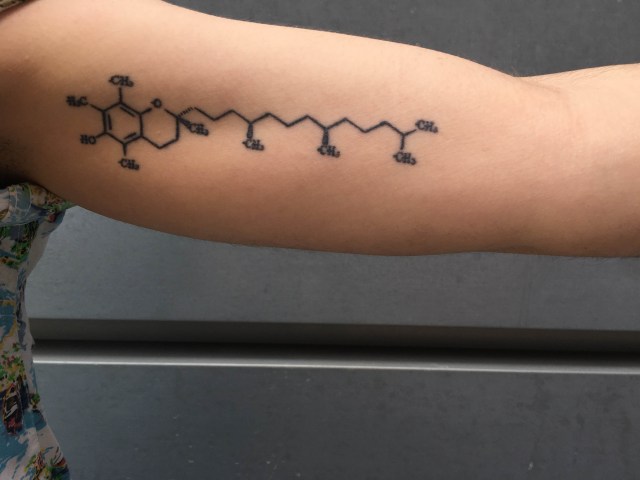 I figured that would be enough; when someone asked for my tattoo story, I could tell them about Jillian Weise and not erasing me and yes, for sure, it lets me do that. It sneaks up on people who don’t know they offered me a soapbox until I’m already on it. I love watching them realize what they’ve gotten into. But for as much as the design says on its own, it means even more as a part of my body that everyone can see.

Being looked at is tricky for a lot of disabled people. Because one of the first lessons anyone learns about us is “don’t stare.” It’s rude and invasive. And yes, sometimes the blatant gawkers just get you on the wrong day and hit you in that spot that makes you feel inferior. It’s draining (and sometimes even dangerous) to be out there when your body isn’t supposed to exist in public. So “don’t stare” is simpler for us too. But here’s the thing: if you don’t stare, you also get to keep ignoring. And ignoring us, I think, is the bigger disservice. It keeps us unknowable and absolves you of the work of seeing us. Not just the parts you like—the ones you find “inspirational” or that “teach you so much”—but the uncomfortable ones. The body up close, unfamiliar. And I love having art on my body that forces people to look at all that again. Makes a body they’d rather avoid into a visible one. Turns something that happens to me (because yes, I know you’re looking) into something I make happen.

The other big issue is choice. I made a choice about how I would look, and didn’t realize until I’d done it how unprecedented that was. Because disability is really good at eliminating choices. It dictates where you can (realistically) live, how much you can get done in a day, how people think about you, and what you look like. You don’t get to decide how it shows up. Doesn’t mean you have to hate it, but you do have to work with it. The tattoo gave me some of that visual autonomy that disability can so easily take away. And, most unexpectedly, it helped me recognize and redefine my body as queer.

I had been out for years by this time. I knew I was part of the “queer community.” But I’d always felt a certain aversion to the word. I prided myself on a pretty cut and dry sexuality; having come out relatively young (in high school), it kept me safe and and mitigated a lot of fear and uncertainty. Plus, disability already made my body strange and unwieldy. I didn’t have the energy for anything more complicated. So when queer started to happen, I kind of wrote it off, assuming that I must have already done the required homework. I preferred to ignore inconvenient ideas that challenged me any further. Pick and choose what I liked and leave the rest. Sound familiar?

Putting this art on my body, setting it apart even further from others, made me realize that disability is nothing if not queer. Think broadly: curious, odd, different, outside of our norms. Disability will do that to your body, orientation be damned. And that understanding gives mine the room to be everything it is. Top to bottom, excluding nothing, messy and fantastic and tenacious. Illustrating that fact on my skin, celebrating and being intentional about it, makes me feel like my body and I know each other now. Not because “I’ll always like this,” but the harder truth: “I’ll always be this.”

That this will not change, in the thick of things we are.