Guys, I don’t know if you know this, but Lemon and I live together. That means I can tell you for certain that she’s a respectful roommate, and also that she looks amazing in a plaid shirt whether it’s 9am or 4am. I can also tell you that when she’s not monitoring comments and fixing broken links here at Autostraddle, she works as a video editor for a well-known media website. So when I half-jokingly suggested we make our very own video for this special edition “Everyone’s At Camp Oh My God Who’s Taking Care Of The Website Shit We Are” Sunday Funday, she took me very seriously.

[Lemon’s Special Note: I can tell you that Vanessa — in addition to being an overall incredible roommate — sometimes likes to wear dresses over her night gown/sleeping dress, self-identifies as a “grandma,” and is always the first to let us know when the fridge is mildly disorganized. You guys, I lucked out on this one.]

In an effort to combat anti-trans violence and promote acceptance and equality, the District of Columbia government has launched a series of ads that “promote respect for the District’s transgender and gender-non-conforming communities.” The campaign is the first of its kind and plenty of people are psyched about it, from DC Mayor Vincent Gray to pretty much every human on my Facebook news feed. Kisha, the trans woman featured in the ad shown below, told Buzzfeed why she chose to participate in the campaign:

“I believe in the message. I believe in equality for everybody, all over the world. Growing up in a household with a single mother and nine siblings, my mother always taught us about equality. When I started living as a transgender woman outside of the home, was the first time I saw the discrimination [against LGBT people].

I think [the campaign’s] going to have a great impact. The fact that it is going to be right there in your face. People will see transgender people. They’re going through everyday life, everyday struggles — the same as straight people, rich people, everyone. Getting the message out there…is going to be great.” 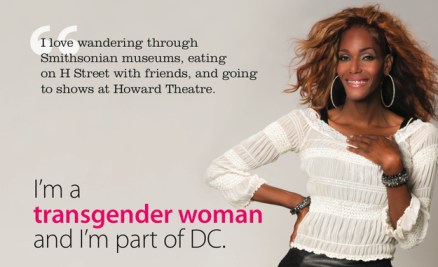 Back in December 2011, Carmen told you that Jeanne Córdova’s memoir, When We Were Outlaws, sounded like the best thing ever and promised it would remind you why you like being a lesbian in the first place. Ms. Magazine interviewed Córdova this week, and I really think you should read the whole thing because it’s informative and wonderful. Here’s a tidbit to whet your appetite:

“I never felt the word lesbian was dangerous. Perhaps I was naive at 19 when I found the word, but to me it was like discovering the Enlightenment. It relieved so much of the pain of my high school and college years.”

Brandi Carlile Gets Married and Gets Political

Brandi Carlile got married to her partner Catherine Shepherd yesterday! Despite being notoriously super-private, Carlile spoke to The Washington Post about her desire to become more politically active, particularly in helping pass Referendum 74 to legalize same-sex marriage in her home state Washington, and about her decision to get married.

“It’s so surprising, and so hard fought…I wouldn’t have been able to picture myself married or successful or pursuing my dreams if there hadn’t been other people that had done it before me, like role models, and that’s why talking about it is so important. If a 14- or 15-year-old girl reads this in a small town who’s gay, then she knows that someday she might get to go get a marriage license and get married, and there’s no reason she should stop dreaming about a white wedding because I didn’t.

…There’s a political undercurrent around equality right now that just demands a voice, voices to rise up and say, ‘Yeah, I’m one of these people too and I believe this thing as well.’ So that’s what we’re doing right now. We’re on the cusp of a civil rights movement and so I have to be a part of it and I want to be.”

To be honest I always feel a little weird about positioning “achieving marriage equality” as a synonym for “achieving full equality for all humans, period” but I do support the idea of making a young gay girl in a small town feel optimistic about her future, so I’m choosing to feel happy about this news. L’chaim to Brandi and her wife! 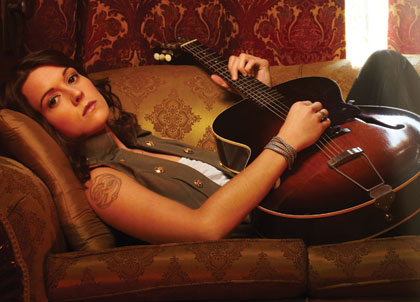 Ellen Sells A Sitcom, Can She Rule The World Already?

Looks like NBC loves Ellen just as much as we do, because they just bought another one of her TV shows. The untitled series features a “successful, independent 32-year-old woman who freaks out and reevaluates her life decisions when she notices she’s listed as ‘single’ on the paperwork for the house she’s about to close on.” If I read that description alone I would probably wrinkle my nose and give it a pass, but since Ellen’s in charge I’m willing to give it the benefit of the doubt and assume it will somehow avoid tired cliches and stereotypes and will instead be hilarious. Also I’m hoping she asks Princess Sophia Grace to make a cameo.

Charlottesville, Virginia, hosted its first Pride Festival in Lee Park yesterday afternoon! In the past, Virginia residents who wanted to celebrate their awesomeness amongst rainbows and fellow queermos had to travel to Washington or Richmond for pride festivals, but those days are officially over. Hundreds of people came out for the inaugural event, and there was face painting, nail design, a children’s bounce house, and a drag show. As a femme-ish lesbian who happens to work at a parenting magazine, I whole-heartedly approve of all the activities. 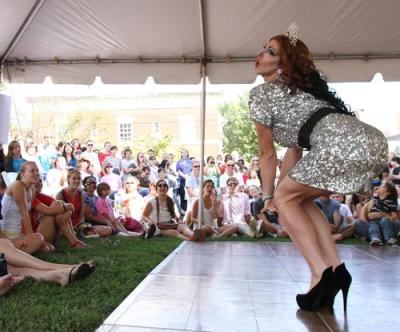 Did you know that Chicago has a Gay and Lesbian Hall of Fame? Well it does, and it just turned 21, and it just inducted 15 new members! BAM. The hall is the only government-recognized hall of fame in the whole country that specifically honors members of the LGBT community, which is pretty darn cool, and gives me one more thing to add to my list of “Reasons I Should Visit Chicago.” It’s a short list, which up until today actually included only one item: “Chicago Straddlers.” But now there’s a second item, which I think means I can actually refer to it as a list without sounding like a weirdo. Anyway! Mazel tov to the new inductees! FYI, they will be inducted during the Hall of Fame’s annual ceremony on November 12 at the Chicago History Museum, and it’s free and open to the public. If you live in Chicago you should probably go.

This Fall, The Midwest Gets Gay: Andrea Gibson, We Are The Youth, Everyone Is Gay

If you live in the Midwest, maybe you get really annoyed every time I write about — and encourage you to attend — cool shit that’s happening in New York. I actually picture you all rolling your eyes every time I do it, thinking to yourselves, God Vanessa, we don’t all live in Brooklyn, so unless you’re offering me a place to crash, why bother telling us about these awesome-sounding things? Well first of all let me say that you are all welcome to a spot on my sofa anytime — it’s comfy, you can ask Carmen! — but also, let me take a moment to redeem myself by announcing three really amazing, queer, stupendous things that are happening right in your Midwestern backyard this autumn.

+ Andrea Gibson is on tour, and she’s making stops in Indianapolis, Minnesota, and Michigan! Also, she’ll be in Wisconsin and Ohio come April 2013. 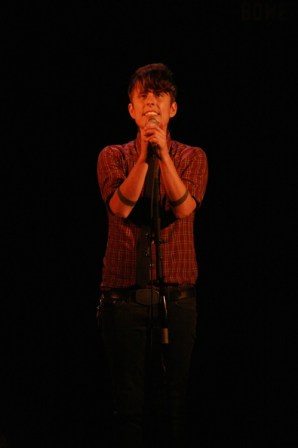 + Have you heard about We Are The Youth? It’s a photographic journalism project run by Diana Scholl and Laurel Golio that chronicles the individual stories of LGBT youth in the United States, and they just wrapped up an incredibly successful Kickstarter that will allow them to broaden their reach and expand the diversity of the project. Thus far the profiles have mainly focused on youth from the Northeast and the South, but thanks to the fundraiser they will now be hitting the open road “to the Midwest and beyond!” If you are a young LGBTQ identified person living in the Midwest and you’d like to be featured in the project, say hi to Diana and Laurel at hello [at] wearetheyouth [dot] org. 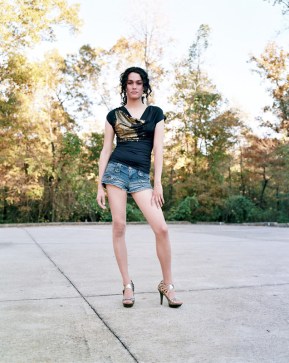 + Once upon a time I was unemployed, living in my childhood bedroom at my parent’s house in Boston, and completely in love with Dannielle and Kristin of Everyone Is Gay. So when they came to speak at Harvard during their Fall 2011 tour, I did what any crafty queer girl would do: I baked them rainbow cake in a jar and gave it to them after their presentation, then begged them to let me be their intern. Well guess what? Almost a year later, I’m gainfully employed, and Everyone Is Gay is hitting the road again, only this time they’re traveling to the Midwest. Check out their full tour schedule, and if they’re visiting your neighborhood, bring them some rainbow cake in a jar and tell them Former Intern Vanessa says hi, okay? 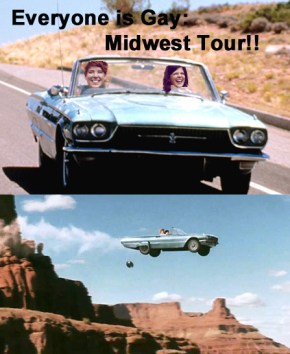 Sure, A-Camp 2.0 has barely ended (in fact, some campers may still be on the mountain as you read this very post) but it’s never too early to get excited for The Greatest Thing Of All Time, right? On Friday I announced the dates for the next camp session, but in case you missed it, here they are again: A-Camp Spring 2013 will take place from Wednesday, May 22 to Monday, May 27 at Alpine Meadows Retreat Center in Angelus Oaks, California. I hope I’ll see all your bright shining faces on the mountain in May!

Who’s Gonna Be There When It Really Counts

I was going to show you this video of an adorable tiny grizzly bear “attacking” a man in a really snuggly way, but then I started humming “Care Bear Countdown” to myself and it made me really nostalgic for my youth, so let’s watch the Care Bears intro together instead, okay?