It’s so nice to see you here, on the Internet.

I mean, let’s be real, it would be a lot nicer if we were all on a mountaintop, drinking tea and basking in the sun and attending gender panels and flirting with cute queers, but whatever, I guess the Internet is fine.

Who are we kidding? I’m totally depressed. Camp is happening right now, and the gang’s all there, except they’re not all there, because some of us aren’t there. That’s us. We’re the gang that’s not there. It’s a bummer, isn’t it? I’m bummed.

So I thought we could talk about our feelings. Spoiler alert, I’m sad and mopey and leaving awkwardly depressing comments on the A-Camp Facebook group. But I’m 100% willing to talk about that and/or convey my emotions in the form of images and gifs, and possibly also Ani DiFranco lyrics. You should do that too. Go crazy in the comments — images, song lyrics, gifs, poems…surprise me with all the forms your feelings can take! And hey, no pressure to be sad. If you’ve got some happy feels going on this week, spread them around. I could sure use some cheer. 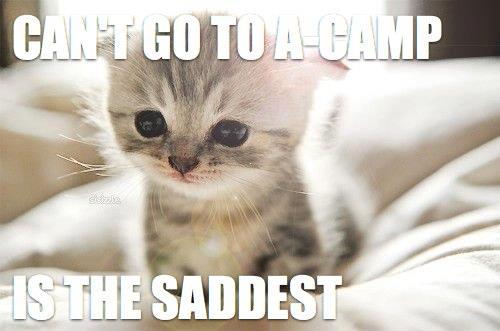 But wait! I’m not starting this open thread with that much gloom and doom. Start planning your triumphant journey to California THIS Spring, because Camp’s gonna happen again (and again and again and again) and I have the greatest feeling that one day, we’ll all be there.

So this is the part where I was going to announce the dates for A-Camp Spring 2013, but we’ve run into this teeny tiny problem called “getting in touch with Riese, or Laneia, or really anyone on that gosh darn mountain.” So I can tell you that we are 90% sure that A-Camp will take place in or around the last week of May 2013, and I can also promise you that as soon as we hear definitive words from Riese, I will update this very post and we will all rejoice. Though I feel like I must warn you not to get your hopes up, because given the status of cell service on the mountain I’m pretty sure all forms of communication involve a pack mule and/or messenger pigeon situation, so.

UPDATE: JUST KIDDING KIDS. Intern Grace obviously read my mind and acquired a messenger pigeon for this very situation, because as of 1:40pm EST I have received the official dates for A-Camp Spring 2013! You heard it here first:

A-Camp Spring 2013 will take place from Wednesday, May 22 to Monday, May 27 at Alpine Meadows Retreat Center in Angelus Oaks, California.