MAP (or the Movement Advancement Project) released its biannual Moment Report today, documenting and analyzing the American LGBT movement’s success across political, legal, and social realms for the past two years. And though there is no denying that 2012 and 2013 were two years of relative elation for queer folks — be it from increased national attention to hate crimes and anti-LGBT bullying, ENDA breaking through the Senate for the first time in decades, marriage equality’s expansion from six to 17 states, or a historic level of LGBT visibility in media and the public sphere — they did not, in a broader sense, deliver us from evil. 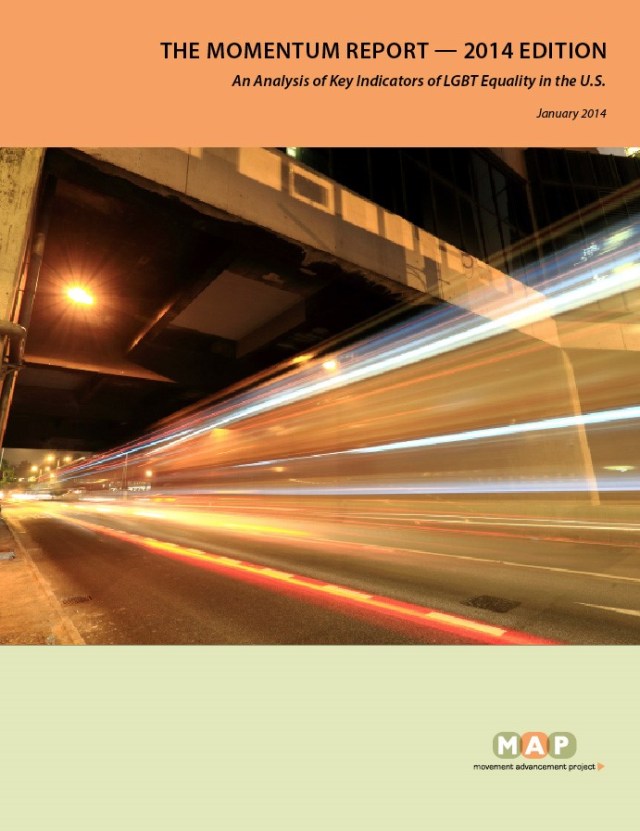 MAP rates only 20 states and the District of Columbia as having high levels of equality for LGBT people as of right now, leaving two with a rating of medium and 28 wearing dunce caps. According to the report, the last two years have driven “a media narrative and public perception that LGBT advocates have succeeded…but for an LGBT person living in Alabama, nothing could be further from the truth.”

“This report highlights a reality that LGBT Americans in Idaho know only too well,” says Monica Hopkins, executive director of the ACLU of Idaho. “While we have had some success in passing municipal nondiscrimination protections, we need to continue to build critical local-level support. We receive weekly calls from LGBT residents who have been unfairly fired, denied housing, or who want to adopt the children they are raising with their partner – and there is usually very little we can do.”

From the Executive Summary:

Unprecedented progress on marriage has led to a widespread impression that nationwide equality for LGBT people is imminent. A closer look at the full range of LGBT rights at all levels of American society, however, reveals a different picture. While the past two years have shown incredible gains toward securing the freedom to marry for same-sex couples, the LGBT movement still has a long way to go to achieve full equality and broad acceptance for LGBT people across the nation.

Let’s take a peek at the state of the struggle, issue-by-issue.

Houston, we have a winner! It’s been a record two years for marriage equality, and it’s outpaced pretty much every other movement for LGBT rights. For queer folks in binational relationships, DOMA being struck down led to a widespread improvement in the opportunities for reuniting with their loved ones from afar through direct sponsorship; for same-sex couples in recognized marriages based in the US, it meant a whole lot of tax law improvements and a bunch of other legal mumbo-jumbo that doesn’t actually sway people to support common sense legislation on the matter. 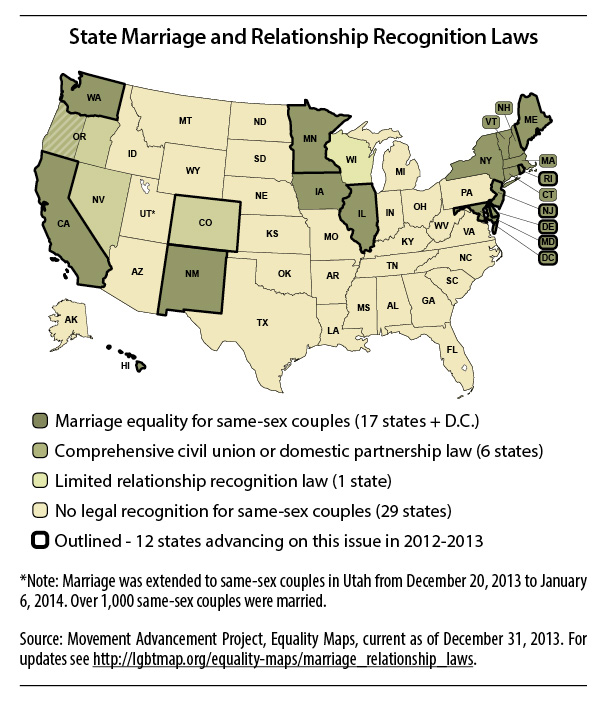 But although most people associate widespread growth in the gay marriage department for a soon-to-come tide of LGBT rights, it’s actually more true that that concept works in reverse. “If you look at the 17 states that extend the freedom to marry,” said Ineke Mushovic, executive director of MAP, “marriage was the culmination of a years-long journey that first included passing employment nondiscrimination protections, hate crime laws, safe schools legislation, and more. Yet over half of states either haven’t begun or are just in the beginning phases of this journey.”

In other words: first come legal protections, then comes marriage, then come babies in various carriages. But in states where gay marriage is nought, neither are other commonly-sought legislative steps toward LGBT equality. That means a lot for the LGBT rights movement, which has invested tons of money, time, and effort into marriage equality and a lot less into protection and nondiscrimination efforts or a broader queer movement. 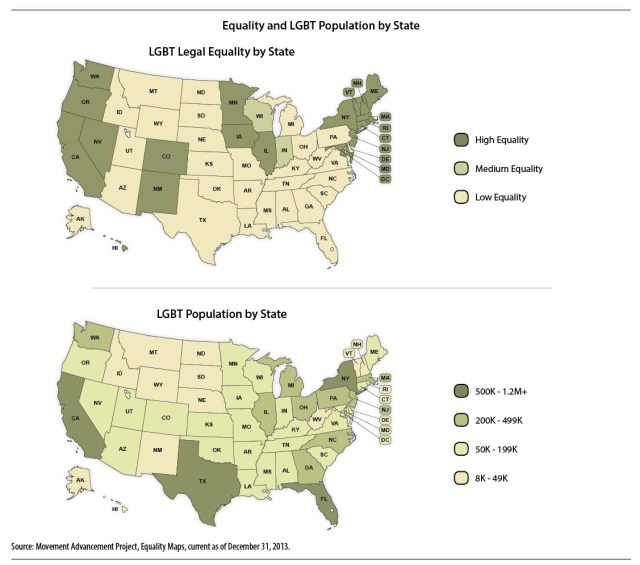 The Every Child Deserves A Family Act, introduced last year in both chambers of Congress, prohibits public child welfare agencies from discriminating against potential parents based on their sexual orientation, gender identity, or marital status, but nobody cares enough to put it up to a vote or talk about it, apparently. That means the only gains same-sex couples and queer individuals made in the realm of adoption and familial structuring were four marriage victories in California, Minnesota, Maryland, and Colorado which also extended the ability for a joint petition for adoption for married couples.

Being gay at work has remained a hot-button issue over the past two years, but not much progress was made in the end. A decades-old effort to get ENDA through the Senate panned out, but the odds of getting anything done in John Boehner’s house are about as high as the odds of John Boehner understanding American government. The US Equal Employment Opportunity Commission ruled in favor of broader standards to report workplace discrimination on the basis of sex in 2012, but to date no courts have applied their decision in court.

Most gains were made on the state or local level: Delaware took huge strides toward protecting trans* folks with an updated nondiscrimination law, and so did many cities and counties across the country. A majority of Fortune 500 companies, top federal contractors, and small businesses also took independent steps to protect workers on the basis of sexual orientation or gender identity at work. The problem with smaller gains, however, is a smaller impact: until every LGBT person is able to be out and honest at work, we are all living in a fundamentally unequal society – and LGBT people will continue to struggle to support themselves and their families and experience poverty.

“This is about basic human dignity,” said Elyzabeth Holford, executive director of Equality Ohio. “Many of our volunteers tell us they live in constant fear of being fired. They just want the opportunity to do their jobs and provide for their families. Mentioning or being seen with their families means they risk being fired. We know most Ohioan businesses and managers believe in treating people fairly, but when that good judgment breaks down, LGBT workers need basic protections under the law.”

The past two years brought about unprecedented national dialogue about the safety of LGBT folks: a slew of suicides in 2010 and research in 2011 shifted discourse on queer youth toward bullying and its consequences, and a VAWA debate in 2013 led to LGBT inclusion in the landmark legislation which will live forever. (Do you hear me, Congress? Forever. Don’t fuck with me like that ever again.) Unfortunately, beyond speculation and sensationalism, not much occurred on the protecting queers front for the last two years.

MAP described state-level advances toward safe schools “slow” in 2012/13, with only Massachussetts and California taking steps to eliminate bullying, intolerance, and violence in schools. There remains no federal law aimed at reducing bullying, despite lip service from President Obama and stalled legislation in Congress. (I hope you’re noticing a pattern here with the legislation. John Boehner.) Some efforts at ending bullying have even ended up hurting vulnerable populations in their implementation, including “zero tolerance” policies which feed the school-to-prison pipeline and disproportionately impact queer people of color. 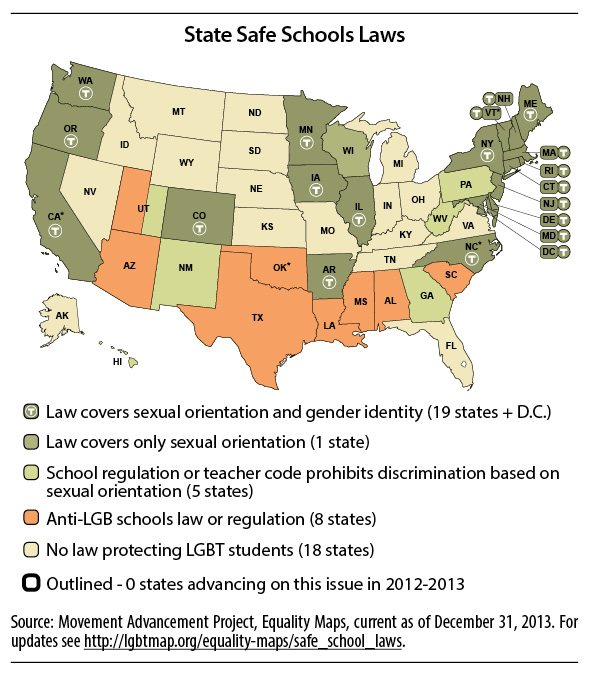 Hate crime legislation has been growing steadily since 2009, when the Matthew Shepard and James Byrd, Jr. Hate Crimes Prevention Act expanded the Justice Department’s role in investigating bias crimes. As of the close of 2013, Delaware and Nevada had come to join 28 states and the District of Columbia in protecting LGB people from hate crimes; only 15 states and DC offer the same legislative protection for victims of hate crimes who are targeted for their gender expression. 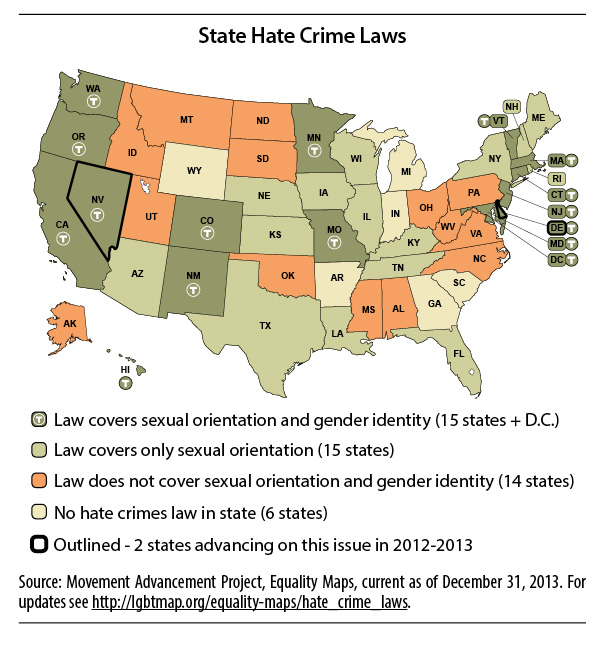 Despite a lack of formal or legislative efforts to curb bullying, GLSEN’s 2012 National School Climate Survey found that all of the talking did result in decreased levels of biased language and victimization, with an increase in LGBT services. Hate crimes, however, remain a serious problem: 20% reported to the FBI in 2012 had to do with sexual orientation, and their hate crime statistics don’t even include gender identity or expression -related crimes.

Although LGBT people continue to face disparities in care, we’re feelin’ a lot better these days. Expanded access to spousal benefits in a post-DOMA world, the launch of the Affordable Care Act, and increased access to leave benefits by same-sex couples in a country more abundant in marriage equality have left queers better able to care for themselves and their families. In 2013, Connecticut became one of five states that now require health insurance companies to cover transition-related care; in 2012 and 2013 California and New Jersey released all minors from the terrors of anti-gay therapy.

When the Social Security Administration changed its policy in 2013 to allow trans* folks to request gender-marker changes on their card with more ease, they were causing a huge ripple effect. Gender confirmation surgery had previously been required by the Obama administration, which obviously limited access to accurate identity documents for transgender folks lacking in the resources or desire to pursue it. Only two states explicitly advanced progress in this arena over the last two years, but they’re now part of a majority: 28 states and DC offer new birth certificates after sex reassignment, leaving 19 who amend in the dust and three who refuse to do either in right field. 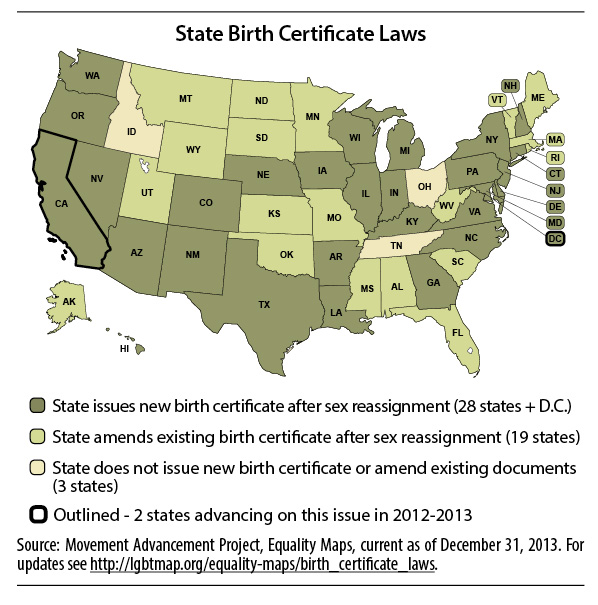 We’re out, damn it. WE’RE OUT AND WE’RE PROUD! Record numbers of LGBT people are now out in public life, on television screens, in movies, in the military, in sports, and even in space. We’re even out in the Boy Scouts (sometimes), out in the morning, and out in Gallup polls at higher rates than our foremothers, forefathers, and forefriends. And if you ask me, that’s something to mothafuckin’ celebrate. After all, increased visibility ultimately means that we’re here, we’re queer, and we’re most definitely never getting tired of it.

No matter how hard it still is.