Hi! Notice anything different around here? We redecorated for 2011. You know what else? Haviland and her “backing band” created a song out of one of Riese’s old poems. You might want to find a way to get that on your ipod.

This week we also gave you the best/worst of everything in 2010 which includes pictures of everyone as cats, so. Also here are the top ten sweatpants you should be wearing (hint: university sweatpants are the best! I’m wearing some right now). In fact, I’d say 85% of my life is spent wearing sweatpants.

DeAnne Smith is back with fears of a lesbian invasion and also invites you to share your favourite “academic” word! 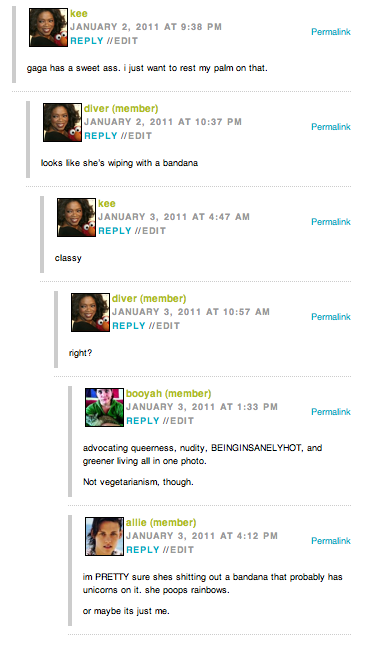 On Buckle Up and Hold Onto Your Gay Marriage in 2011:

The I Might Be Slightly Biased Towards Canada Award to katiebug:
I’m all for bringing people up here but we might also want to think about pooling our funds and buying a private island and declaring it a sovereign state. Possibly we might want to buy an island in Canada so we still have easy access to the maple syrup and beer.

The Harry Potter Award to bani:
difficult times lie ahead harry, soon we must face the choice between what is right, and what is easy.

On The Belated Best/Worst Everything of 2010:

The We Are All Made of Kittens Award to Barbara:
the cat with the iPod looks like Laneia. Just saying.

On “Pretty Little Liars” Returns: Gay Emily is Coming Out, She Wants Her Parents to Know:

The Eyes Have It Award to e:
you guys aria’s eyes should be a separate character they’re so big and dreamy

On Gay Ex-Newsweek Writer Finds A Third Way to Make A Bad Point About Gay Actors:

The Bananagrams Award to JanisBing:
I spent thirty minutes trying to write something mean. All I found was this bad anagram.
Ramin Setoodeh
________________
ie Random O’Shite.

The Reverse It Award to Dina, terracottatoes: 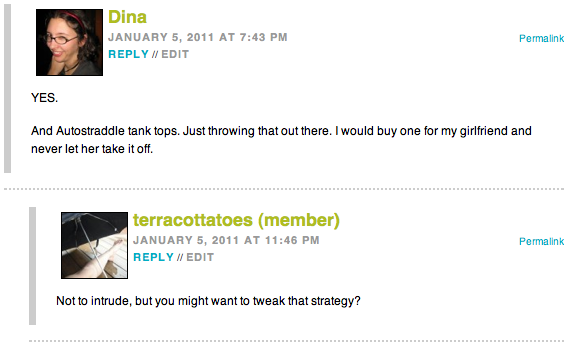 On DeAnne Smith and the Lesbian Invasion:

The Sing It, Sister Award to Cassandra:
My life is a mini, impromptu Pride march.