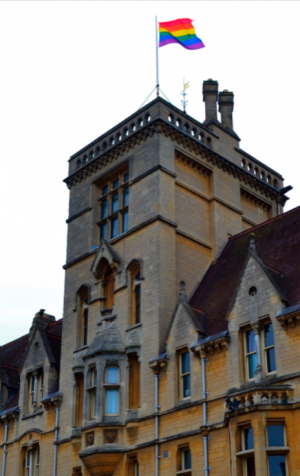 The Oxford of literature is a very gay town indeed. Evelyn Waugh’s Brideshead Revisited and Alan Hollinghurst’s Line of Beauty portray passionate and troubled tales of same-sex love shadowed by upper-class privilege and ambition. Lesbians are largely invisible in these stories, as in Oxford’s gay hagiography, populated by the likes of Oscar Wilde and W.H. Auden. Though the university has produced a few renowned lesbians — Jeanette Winterson and Rachel Maddow come to mind — men’s experiences still represent the dominant picture of Oxford’s queer life.

Today, a lesbian Oxford is emerging through Plush Lounge, the Jolly Farmer Pub, the university LGBTQ society events, and more traditionally romantic spots being queered by quirky love stories. We’ve chosen some of those stories, gathered through interviews (and our own escapades), and flourished with several “characters” for which Oxford is so famous – four trusty, lusty ladies to guide you through Oxford: Caitlin, Bryhildr, Melinda, and Sybil! 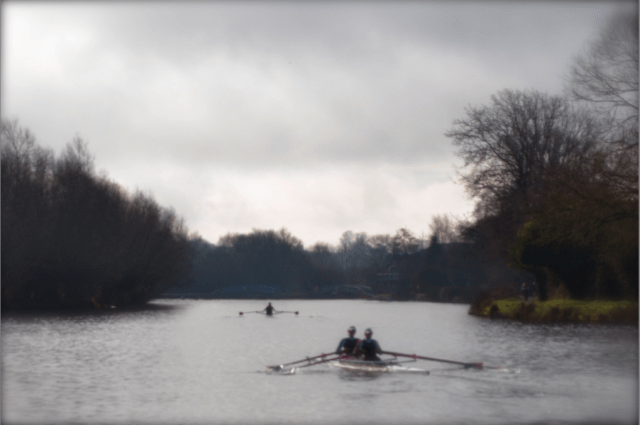 Caitlin, the comely Christ Church crewbie
came to Oxford via Papua New Guinea,
where she’d gone to espouse Christianity
but(t) ended up charging to play with your boobie.
(and other naughty parts…)

Rowing embodies everything about Oxford: the competitive drive, fierce college loyalty, and cliquish circles made up of incestuous webs of exes and celebratory hookups. The University “Blues” Squad is the height of rowing prestige, and Oxford admitted me to the MBA with the understanding that I would row with the Blues. I cooled down from training one morning with a walk along the Isis, passing professors walking their dogs, students jogging before tutorials, and local pensioners enjoying the mist rising off the river. Returning to the boathouse to shower, I thought I was alone, and stripped off my kit as I walked past the rows of sculls. Yet as I stepped under the warm water, I heard a woman moan in the next cubicle… then another moan, from another woman.

Unable to contain my curiosity, I indiscreetly peeked over the partition. The woman who rowed stroke was kissing our cox’s inner thigh. She sighed, at the kiss, and then caught her breath – and my eye. I heard a chortle, and a wet slap, then saw a pair of feet, and a hand pulling back my curtain. It was too tempting to refuse, and too exquisite to regret. It had been a while since I had shared my expertise in sex, but I’m certain they appreciated my techniques learned and plied in New Guinea, and that our bonding in the showers made us a crew of more passionate rowers. 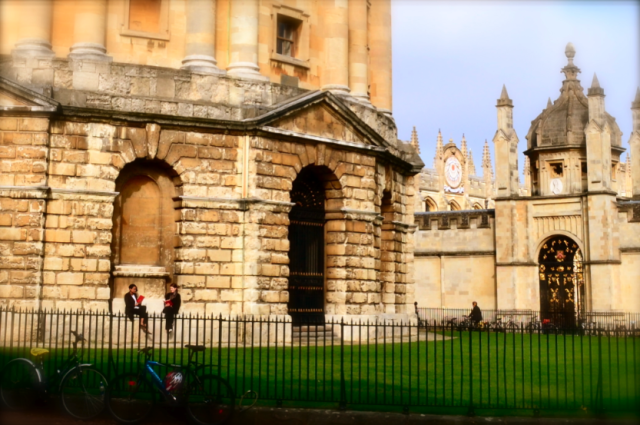 Bryhildr, the big, butch Botanist
epitomized the angry feminist.
Openly opining in Oriel’s common spaces,
she valiantly put doddering dons in their places.
Striding unabashedly in begrimed brogues,
Bryhildr robustly berated sexist rogues,
before mounting her bicycle with surprising grace…
(alas, in truth, she wobbled along at a precarious pace!)
Bryhildr, of the two out lesbians in College,
was the one who engaged in frottage (…with the foliage).
Although few had the nerve and approached her,
bolder baby dykes found a soft-spoken friend in Bryhildr.

I truly, viscerally felt Spring for the first time in March of first year. Spring was not in the beds of roses beginning to bloom near Magdalen bridge, nor the echoes of bird calls as I walked through the uni botanical gardens. Spring was not in the full boughs of cherry blossoms with which I filled my senses before ducking into the Radcliffe Camera to prepare for a tutorial. The seasonal giddiness began to infect me in the “Rad Cam’s” Upper Camera.

As my eyes wandered from my notes up to the dome, I caught her gaze. Had she been watching me in my reverie? I dared not look up again. Feigning a search for a book, I made my way around the balcony’s arc, inching towards her with my fingertips sliding along ridges of volumes that seemed to pulse with my excitement. Just past the wrought iron staircase, she came into view making her way towards me. Wordlessly, she followed me down the tight spiral to the reading room floor, then down the broad stairs hugging the Rad Cam’s arc, out onto the pristine lawn. I sensed her trailing me around the building to a nook facing Brasenose College. What now? I held my bright red notebook up to my body, shielding my heaving chest, my nervousness. Opening her own book, she sat down opposite me. When she moved closer, I knew the meaning of Spring. 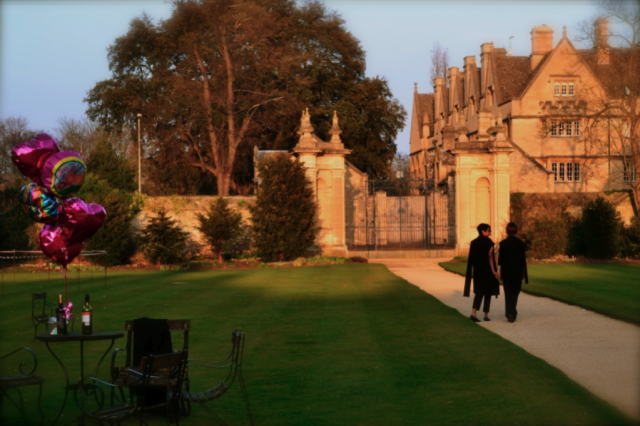 Melinda, Melinda, Merton’s madcap maid:
Was she gay? Was she straight? Or somewhere in the middle?
Last Sunday, seen with a gent, about to get laid,
only yesterday, with a woman, she was rumored to diddle.

Oxford’s “sex places,” the senior students whispered, were “lawns, libraries, and laundries.” By the end of my second term, although I had managed to tick off library and laundry, the lawns remained “virgin territory” to me, until one momentous night. An old Etonian on my boyfriend’s staircase was throwing a birthday party on Trinity lawns. Running indoors to get more wine, I noticed a flirty third-year had followed me in. She was stunning that night, and as our eyes met, a delicious mischief bubbled through me. Before I could compliment her chic coif or remark upon the wine, she had pinned me against the kitchen counter. Inspired, I spun her around, holding her hands against the cabinet, our fingers interlaced. Tilting my head to kiss her neck, I glimpsed someone else, presumably wondering where the wine was, push open the door. We leapt apart and flitted back into the party, shaking fingers barely able to grasp the wine bottles.

Breathing in the crisp spring air, with the expanse of grass, and the gravelly path stretching before me, I felt something click. I waited until she slipped away, and followed her behind a secluded little gate where we recommenced our canoodling. Tipsy fumbling led us back to her room for the night. 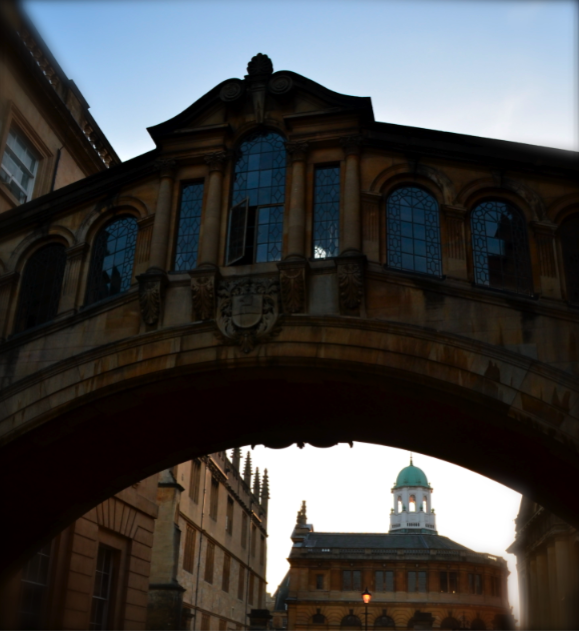 It began with one of those moments. Expecting a discussion on feminist theory, some esoteric conversation, perhaps a coffee with a few other Women’s Studies students afterwards, I was unprepared for the thrill that shot up my spine when I opened the door. She was poised effortlessly at the seminar table, glowing and animated, strong slim fingers punctuating the end of a sentence. Her pure energy orchestrated the silence as our eyes met: collided, engaged, forming a secret pact. Perhaps I only imagined that singular connection, and each of us in the room responded to the desire She exuded, the discussion a grand flirtation for her.

The hint of a rumor began to spread: what’s this I hear about you and the visiting scholar? Why did she raise an eyebrow when you mentioned polyamory? M claims she saw you two kissing outside Freud Cafe!

She smiles when I ask whether I might come solicit her advice on my Masters dissertation. There, she offers me a cup of tea, which I promptly spill down my front. Humiliated by my clumsiness, I burn from cheek to chest. What begins as a tease, “you had better take off your shirt!” escalates as I see my flush reflected in the excitement of her eyes. She steps towards me; I finger the button of my collared shirt. Now is when she should pull me forward, grasp my shoulders and kiss me. Yet she stands out of reach.

“Being watched arouses you, doesn’t it?” Her steady gaze more forceful than had she pulled my hand, I follow her out, down High Street, turning at St Mary’s. Are my steps, my breaths, in tempo with hers? Am I breathing at all? Past tourists clicking all the same photos before the Old Bodleian Library and Sheldonian Theater, we weave into a well-trimmed quad. She knows the way.

On the Bridge of Sighs, time is once more suspended, now in swollen anticipation of the inevitability of our kiss. There, in dozens of camera viewfinders, in the leaded windows’ refracted light, she leans towards me…and snaps me out of my fantasy. It is all a fantasy. For the reality is “discretion” — the hint of an ancient hush when it comes to open expressions of lesbian love.

Sybil has written 1 article for us.