Welcome to the fifth episode of the fifth season of Glee, a dramatic television show about fourteen girls competing viscously and erotically for the title of America’s Next Top Model while stealing granola bars, lighting their heads on fire and looking at their assholes in the mirror. This week, everybody sang songs about darkness and put their butts in each other’s faces. 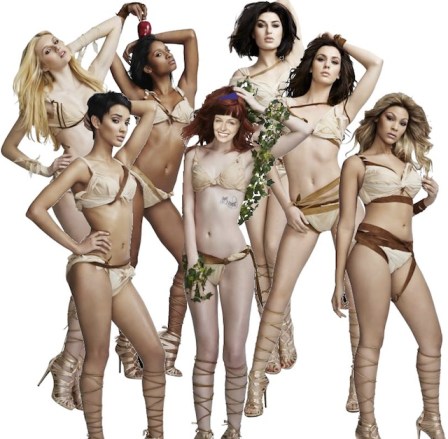 and you’re gonna hear me meow

“The End of Twerk,” like so many Glee episodes, was tonally uneven, emotionally off-kilter and pushed all the wrong envelopes. Also, William Schuster deserves to spend the rest of his life in the rubber room. I’d like to quote Autostraddle Contributing Editor Mey who pointed out on her tumblr, “Tonight’s Glee was so patently offensive I could barely believe it.” Yup.

We open in Lima, Ohio, at McKinley High School, an institution for children suffering emotional trauma after riding The Beast at King’s Island. Blaine Warbler’s alone in an empty classroom, hopping about like a sugar-high toddler doing lunges with a ferret in his pants. 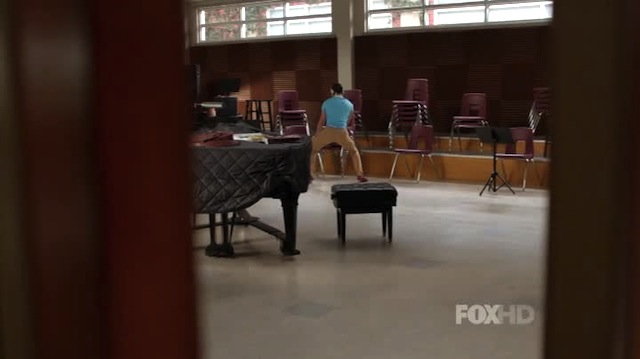 whatever i don’t need kurt, i can just autostraddle and engage in frottage with this chair all the live-long day

Tina, Blaine’s #1 Space Invader, is filming her gay with a mobile device, and thus we zoom in to said mobile device and then zoom out to see all of the Glee Club watching Blaine’s bootyliciousness and having a laugh. 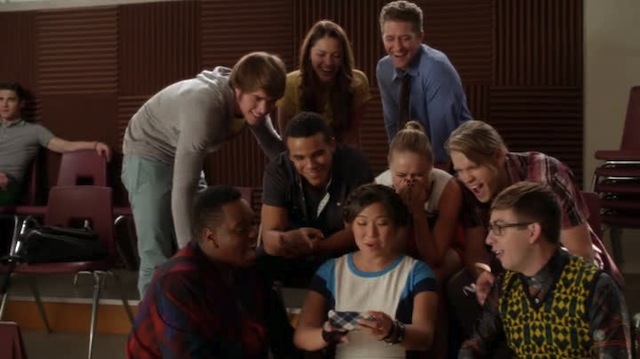 aw, kittens playing in the snow!

Sir William: “That’s the kind of reaction we need from the judges if we’re gonna one-up Throat Explosion at Nationals. We need to edge up our “America’s sweetheart” image a bit. Show the judges that we’re not afraid to rebel.”

Ah yes, and what better way to “rebel” than to follow in the problematic footsteps of Miley Cyrus! Marley-Kate says she’s not confident she can twerk, but Sir William promises, “have no fear, your twerk-torial is here.” At which point I’m absolutely petrified, as well as confident that this twerktorial will never be as good as Kaylah’s Twerkshop (CONFIRMED: Kaylah herself has declared the upcoming twerktorial “terrible.”) 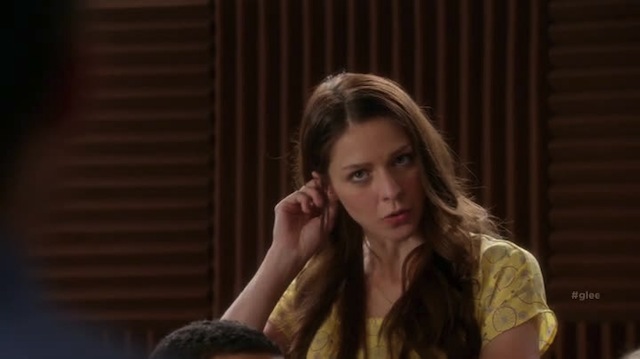 Cut to the Auditorium, where New Puck and Fake Quinn are delivering aforementioned twerktorial, which opens with New Puck’s assertion that although twerking began in “the Atlanta club scene,” it’s now “global.” Like warming! 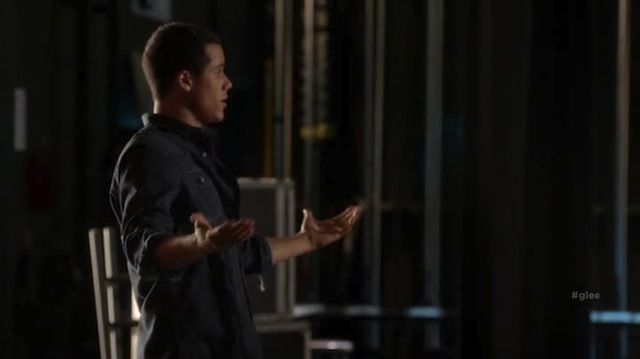 so then you’ve got a grapefruit in one hand, and a breast implant in the other —

Fake Quinn pops her nubile ass to Artie’s delight and Sam declares twerking “White Chocolate’s signature move,” because of course it is. Sir William complements Unique for being a twerking “natural,” to which she declares:

Unique: “I been twerking in my bedroom since I was six to Miss Beyonce.”

You guys, when I was six… Beyonce was also six. 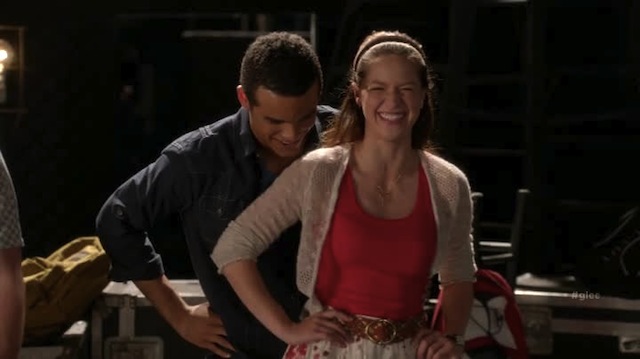 stop it! stop peeing on me! no stop it!

We then slap on some earmuffs, furl a scratchy striped scarf around our vampire-ravaged necks, build a sled out of an abandoned coffee table and a stop sign, and scooch our way over to New York, New York, land of Carrie Bradshaw’s exes, where Rachel’s getting her haircut, probably at DRAMATICS NYC. 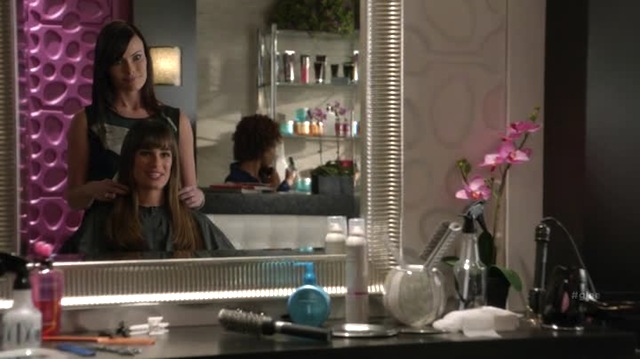 it’s just like, i want girls when they look at me, to know that i’m gay. without even having to ask. you know?

Rachel says she wants something brand-new and different. Like this, probs: 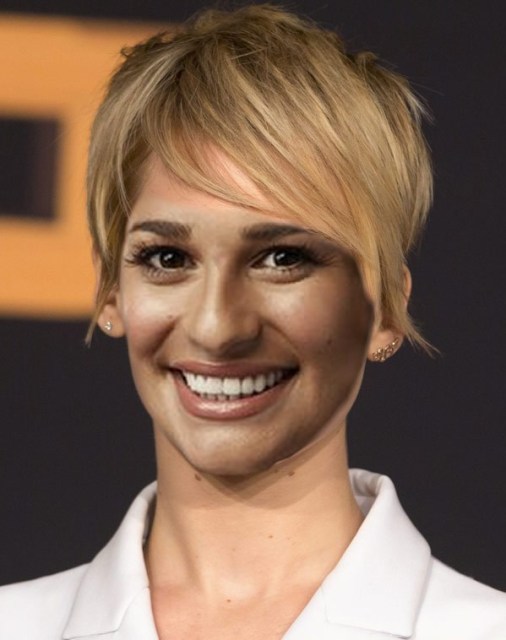 But before we’re gifted with a sneak-peek of her undercut, we cut immediately to Broadway Rehearsal, where Mike Dexter and Paolo Who Won a Tony are hanging out on a chaise lounge. 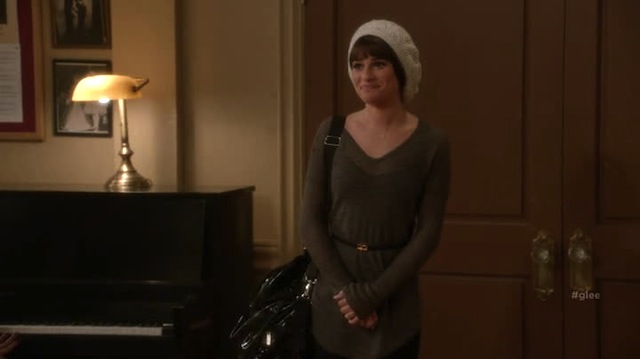 it’s true, i slept with romi klinger and she lent me her hat!

Rachel removes her snowcap to reveal a brand-new bob, and both men are aghast ’cause haircuts and lipstick and vagazzles et al must be run by Mike Dexter first. 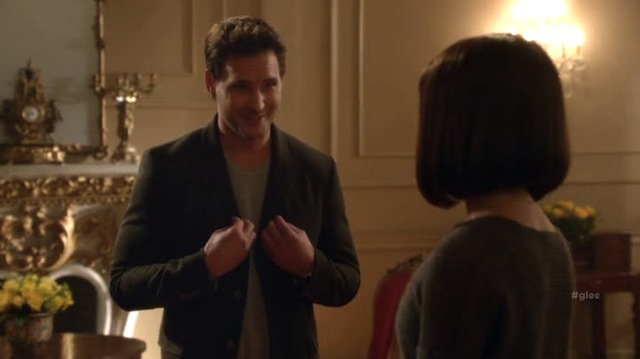 Rachel’s like, look, my boyfriend literally just inexplicably dropped dead and besides everybody knows Broadway shows are the #1 employer of wig professionals so maybe we can all just move the fuck on. Thus Rachel and Paolo Who Won a Tony launch into “I Am Woman, You Are Man,” just in case anybody was confused, re: gender identities of Rachel and Paolo Who Won A Tony. 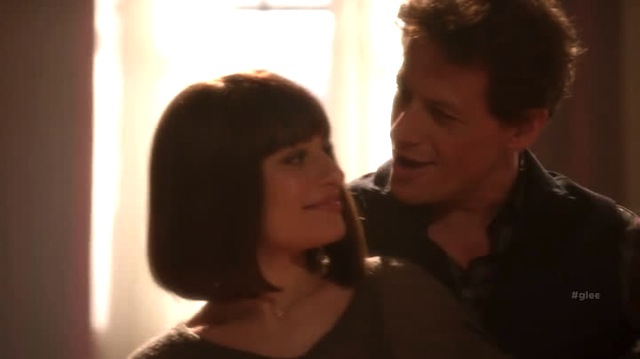 hey! i’m old enough to be your father!

Mike Dexter is so awestruck by her performance that he declares undying love for her special haircut.

We then buy our Mom’s old minivan with no middle seat and janky air conditioning, fill ‘er up with overpriced gasoline, and emit fossil fuels into our hearts and souls all the way across Pennsylvania until at last reaching Lima, Ohio, where Unique’s overdosed on Diet Coke and requires a mid-class bathroom pass. 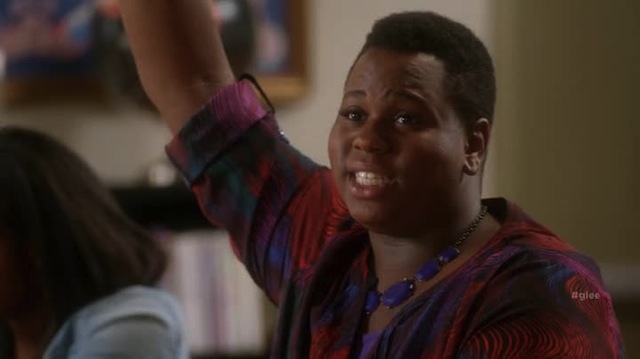 hi yes, if you don’t mind, i’d like to be excused from this show? i feel like the writers don’t really know anything about how it feels to be me and it’s just really getting ridiculous, you know?

Alas, Unique’s plan to sneak unseen into the little girls’s room is foiled by New Santana, who’s in there taste-testing lip gloss and chatting with the mirror about her plot to kill Snow White.

New Santana: Stop right there, voice of Elmo. Do you honestly expect me to believe you stumbled in here by accident?
Unique: Please don’t tell anyone. I’m afraid to use the boy’s bathroom. I can’t. I just don’t feel comfortable in there. I make sure to only come here during class so nobody finds out or gets upset. 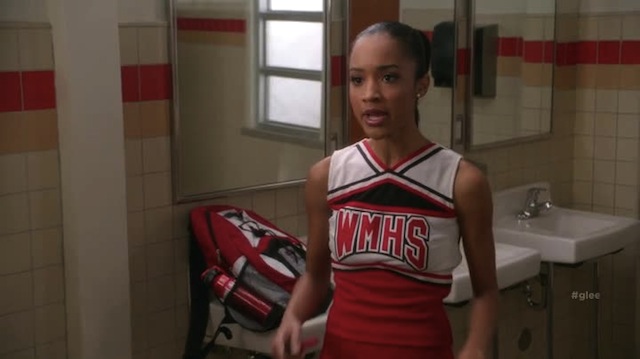 do not go into that stall, there’s a fetus in it!

New Santana assures Unique that her secret’s safe with her, which it obviously isn’t, as we’re then transitioned into what Unique’s voiceover describes as the “Great McKinley Bathroom Gender Riot of 2013.” Said gender riot entails the following: New Santana discovers the boys’ room is a hot spot for riding the hobby horse with New Puck undetected. 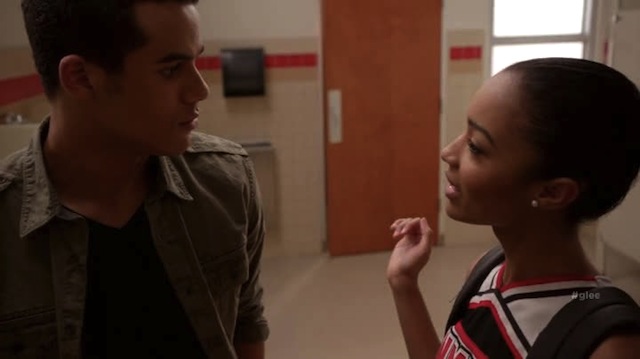 stand still you have an eyelash

Stoner Bret discovers the girls’ room smells better and allegedly has heated seats (You know who actually does have heated toilet seats? Google.) (AND THEY’RE AMAZING). 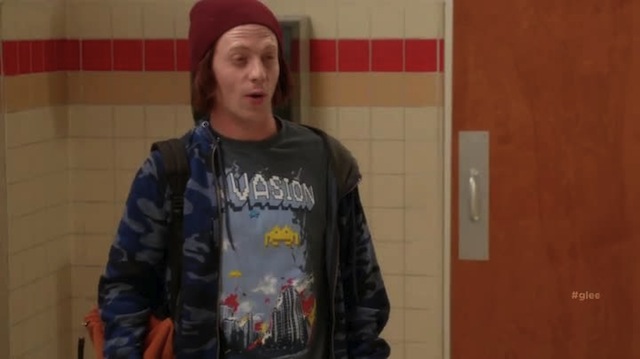 whoaaaaaa is that whole machine filled with tampons??????

Then, the girls, who must’ve spent their entire lives until this very moment with their heads buried in quicksand, “realize that boys never had to wait in line” and began using the boy’s room for their lady business. 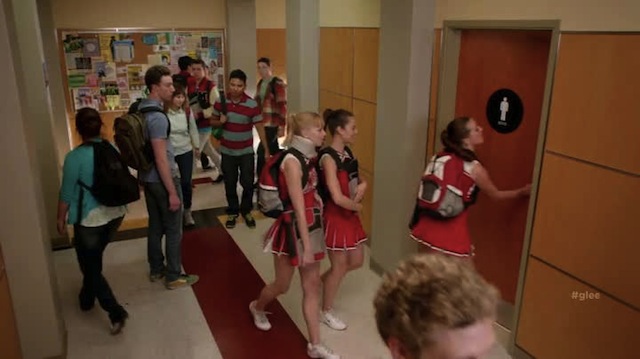 come on ladies we have to see the fetus eventually, may as well be now

Then ALL HELL BREAKS LOOSE and the bathrooms become crazy rave dance clubs, which is EXACTLY what Bill O’Reilly said would happen if you let trans* kids in the bathroom. 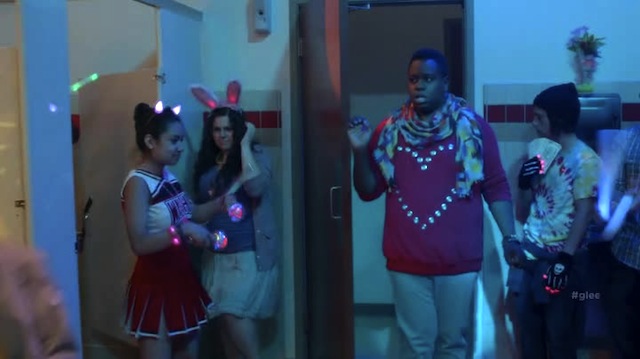 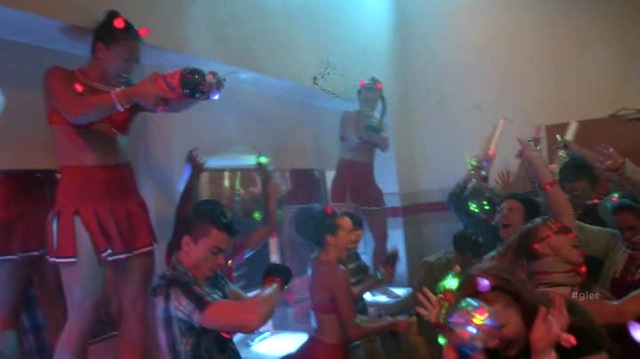 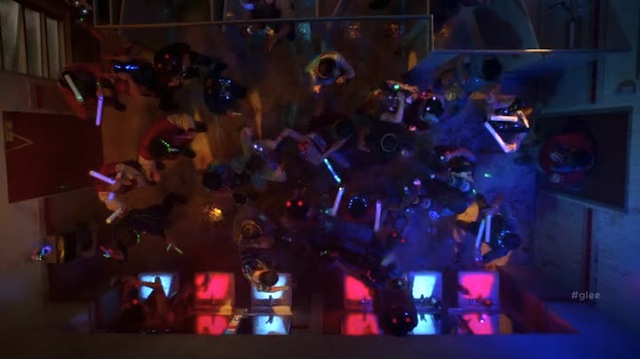 We then hop into one of those thingamajigs they used to send Moses down the river and float on back to New York, New York, where Rachel arrives home at the Bushwick Barbie Dreamhouse Loft to find Kurt’s shocked out of his soft socks that Rachel chopped her luxurious mane of Jewish hair into a little bob of Jewish hair. Then she whips off the wig and reveals it was all just playtime, so I guess she was just at the hair salon to visit Shane. 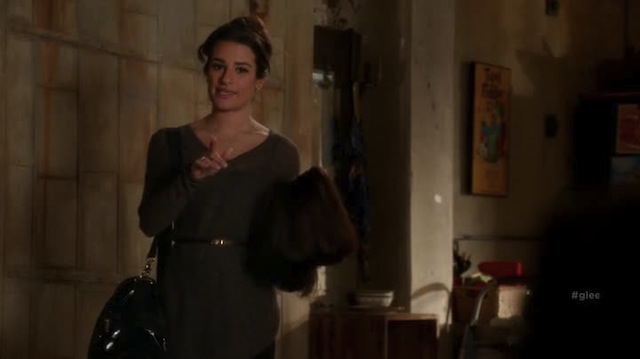 Rachel tells Kurt that he’s become super-boring ’cause all he does is drink smoothies, watch television and skype with Blaine, but not even sexy skyping, just the regular kind of skyping.

Rachel: Do you remember in high school how everything felt so urgent? Like if we didn’t just go for it we’d lose our chance forever?
Kurt: Yes it was very stressful.
Rachel: I want to feel that way again. 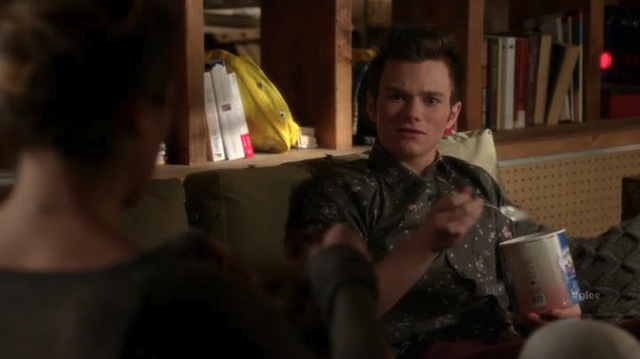 what do you mean i eat all the chocolate chip cookie dough bits and leave you with a tub of vanilla ice cream craters?

She’ll feel it again soon enough — the part of your twenties that comes right after college feels like that, too, I think, because you’re all grabbing for something again, like how in high school you were grabbing for the best college or otherwise impressive post-secondary-school plan and it’s the synchronicity – how so many people you know are reaching for the same thing at the same time. It’s a panic, really, which is motivational if you’re confident, and paralyzing if you’re not. Which is when you learn so much in life comes down to confidence. Which is petrifying. 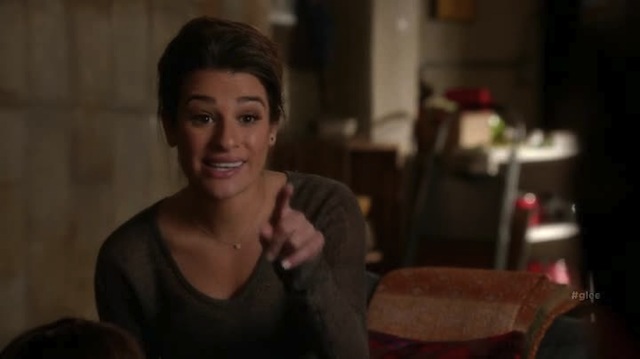 see! right there out the window! i swear kurt they’re doing naked yoga across the street

Kurt caves and agrees to do something wild and crazy, like drink a bottle of Limoncello, which btw was once how we identified Rock Bottom, as in, “we are so out of alcohol that I’m just gonna drink this fucking limoncello until I die.” 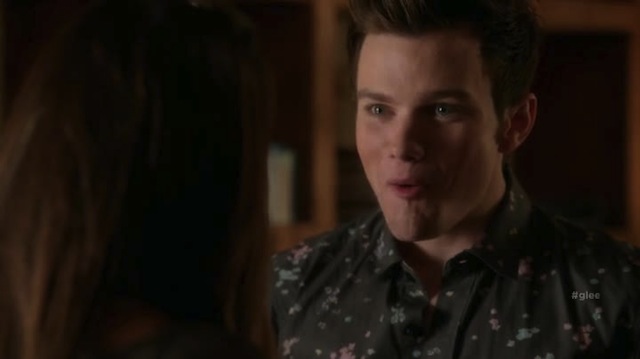 oooo that junior mint is minty fresh as hell

I could stay here, just to hear them breathing, and never return to Lima. Look I know I’m biased — as I’ve likely mentioned in past recaps, when I was Rachel’s age, I was living in an overpriced two-bedroom in New York City with my gay best friend (an actor) and a girl I was pretty good friends with in high school (a musician) and all of us were reaching hard and fast for something, anything, that would make us feel “worth it” and special and talented as much as high school did, and so in so many ways this is my story and I can’t help but want to see more of it, and always. But COME ON REGARDLESS OF ALL THAT, THIS SHOW IS SO MUCH BETTER THAN THE LIMA SHOW. Next year; Unique, Tina, Artie and Blaine should move to New York and McKinley should vanish into the ether.