Hello and welcome back to Boobs on Your Tube! Whew! Television is finally roaring back to full speed, isn’t it? This week, Heather laid out the case that Grace and Frankie are undoubtedly each others soul mates. Then there was the bomb-dropping ending on the penultimate episode of The L Word: Generation Q to be dealt with, both in Riese’s epic recap and Drew and Annalyssa’s podcast. Can you believe that this week is the show’s Season One finale? Do you know what we’d love to see Generation Q’s second season? Trans actors playing trans women characters – if you haven’t read this magnificent and nuanced piece of criticism from Drew, get on it; this is some of her best. Speaking of Drew, she also watched the Second Season of Sex Education and would like to know when the show is going to get serious about trans inclusion (so would the rest of us).

Batwoman publicly came out about her sexuality in a one-of-a-kind fashion and Heather Hogan was all over it! First she spoke with showrunner Caroline Dries in an Autostraddle exclusive (it includes the full screen image of Batwoman’s coming out issue of Catco, invterviewed by none other than Kara Danvers!). Then she broke down the episode for you, and her enthusiasm for Kate Kane is absolutely contagious! There were recaps aplenty to be had: Supergirl, Legends of Tomorrow, Riverdale, and Good Trouble. Netflix dropped the trailer for their new comedy series Gentefied, produced by America Ferrera, and there were some Latinas making out – so you know Carmen was all over that.

Finally, may we present to you the Valerie Anne’s greatest creation: The 100 Best Lesbian, Bisexual and Queer Sci-Fi and Fantasy Shows of All Time. She spent over two months doing original research for this study. We couldn’t be prouder to share it with you. 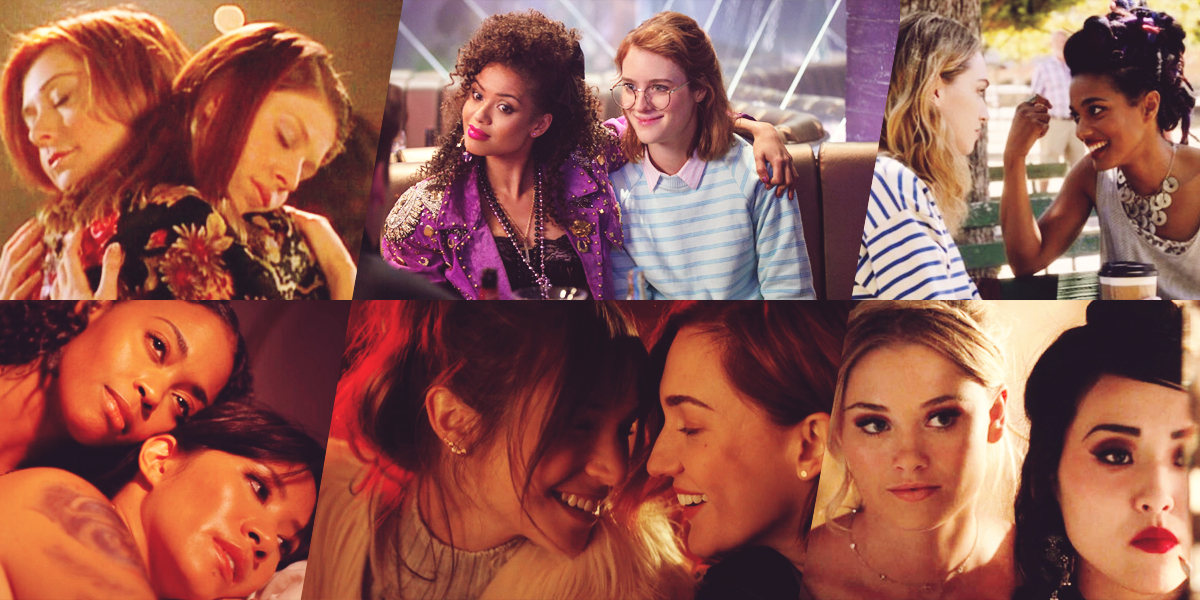 Can’t wait for you to find out who takes home the #1 crown.

+ They finally gave Resident Hellmouth a relevant plot on Grey’s Anatomy in the series return crossover episode with Station 19! Sadly that plot involved a very drunk Hellmouth being caught in Joe’s Bar after a car ran through it and worrying that she was dying. She wasn’t, but given all the Bury Your Gays that happens on TV, I respect her concern. For a while I thought they were going to pull an Arizona Robbins and amputate Hellmouth’s leg, but she made it through just fine (and got to confess her love to Meredith Grey along the way). Hopefully this is opening the door for more Hellmouth in our future! — Carmen

+ Speaking of the Grey’s/Station 19 crossover, in Station 19’s Season Three premiere we find out that they’re dropping the whole Maya used to date Dean’s girlfriend plot. I was surprisingly upset about it? Bring on the bisexual love triangle, I say! — Carmen

+ The Bold Type returned for Season Four last night. It was light on “gay plot” (Adena’s away on a work trip to Alabama), but Kat did find a way to save Scarlett magazine and Jaqueline’s job. What can’t these crazy kids do? Kat also got to participate in one of my favorite TV things, which is when a queer woman talks down to a bunch of white men while looking hot and wearing pants. I took a photo for you! — Carmen 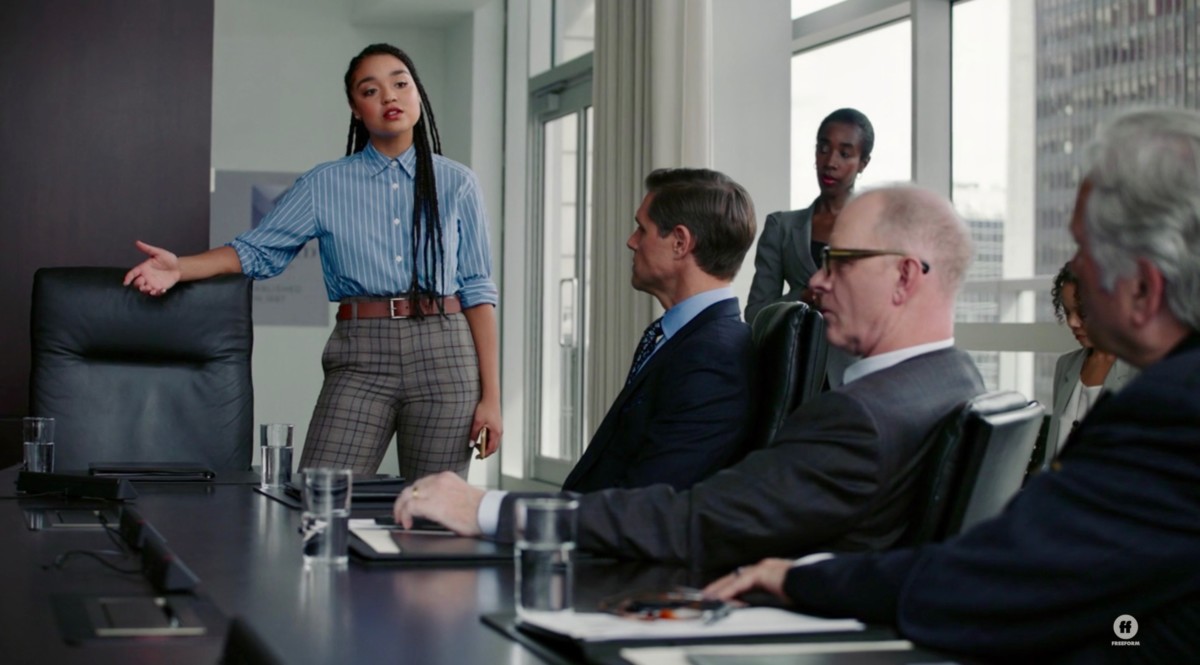 + This week on Emmerdale, hopes that we’d finally get the “Vanity” wedding we’d been longing for were dashed by Charity’s quest for revenge against Graham. A disappointing turn, yes, but I’m confident that eventually Vanessa and Charity will get to the altar and Emmerdale continues to model how to keep the drama flowing without compromising the love between the characters. — Natalie

+ I can’t wait until Monday when new episodes of Home and Away return to Australian television. Alex and Willow were TV comfort food for me in 2019 and I’m excited to see how their relationship grows in the new year. — Natalie 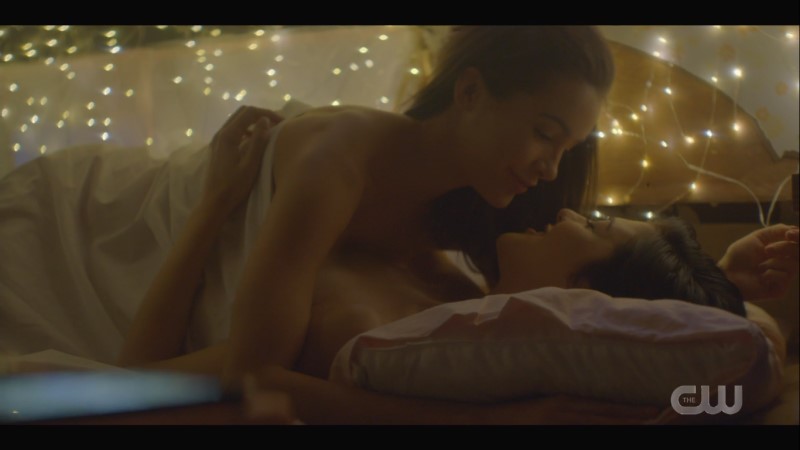 My eyes were twinkling like those lights during this scene.

This week, Bess comes out to her girlfriend Lisbeth as a British kleptomaniac with an expired visa who lives in a van, and Lisbeth hardly blinks about it. Bess thinks the Marvins can help her once they accept her into the family, and Lisbeth is supportive and sweet. But when Bess meets her great-aunt, she tries to set her up with a girl from another family for ~connections~ and she tells Bess that Marvins can have fun with whoever but “don’t marry the driver.” It’s almost nice because Auntie doesn’t care what gender Bess dates, just what status they are. Which also sucks and is a shitty attitude OBVIOUSLY but it’s still a refreshing twist on ye olde tale. Anyway Auntie tries to assure Bess that she just wants her to meet this girl for “mentorship” reasons but we’ll see.

Really putting the nail in the Lisbeth coffin as far as the Marvins are concerned is the fact that Lisbeth came out as an undercover cop, busting the patriarch of the family in the middle of Bess’s long-awaited dinner.

But Bess doesn’t hold it against Lisbeth – she was just doing her job, after all. Then they hang out in Bess’s van and exchange “I’m kind of falling in love with you’s” and get to have a sweet little love scene that is a nice juxtaposition to Nancy’s sex dream the episode opened on.

The episode ends for Bess when she, with a sleeping Lisbeth on her shoulder, peeps her appointment to meet the new girl and looks a bit uneasy; will she choose love or a chance to be part of the family she’s always dreamed of having? (PS: Someone please explain to me why I still ship Nancy and Bess even though Bess has a perfectly lovely girlfriend RIGHT HERE?! Why am I like this?? Someone fix me????) 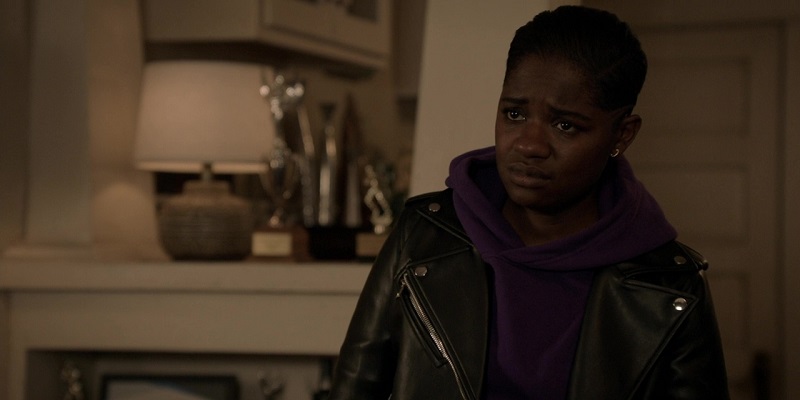 All American picks up where its mid-season finale ended, with Coop confronted by the man she helped send to prison. Before she and Ty can exchange insults, Preach’s gun cocks in her ear. Coop rushes back to Spencer’s, shocked and scared that Tyrone is back on the streets. Preach knocks on the door and admits that the charges against Tyrone were dropped because he refused to testify. He promises to handle Tyrone in his own way but for now the pair come to an understanding — Coop stays alive as long as Tyrone does — which might be the best Coop could hope for under the circumstances.

Later, Coop’s working at the Slauson Cafe when she overhears a promoter talking about an upcoming show at Bella Noche skating rink. She makes nice and ultimately he promises her the last slot in his showcase if she can sell the remaining 40 tickets at $100 each. Preach spots Coop at the park, hawking tickets for the show, and asks her what she’s doing. It’s an understandable question from the man Coop tapped to, ostensibly, manage her career but she’s still angry about him letting Tyrone go free. Preach reminds Coop that she doesn’t need no new friends but his warning falls on deaf ears. Unsurprisingly, when Coop shows up at the rink, ready to perform, the promoter acts like he doesn’t even know her.

Coop stops by Preach’s job to explain what happened and recruit him as back-up for when she goes to reclaim her money. He’s reluctant to help but, when push comes to shove, Preach shows up. When the promoter both refuses to give Coop’s money back and disrespects Preach’s name, Preach gives him the ass whooping he’s got coming. Coop tries to stop the assault but Preach pushes her away.

“I’m tired of saving your raggedy ass time and time again,” Preach tells Coop. He collects Coop’s money as a debt and declares himself done with her.

And who’s standing nearby, taking the whole scene in? Tyrone, of course.

Coop, you in danger girl. 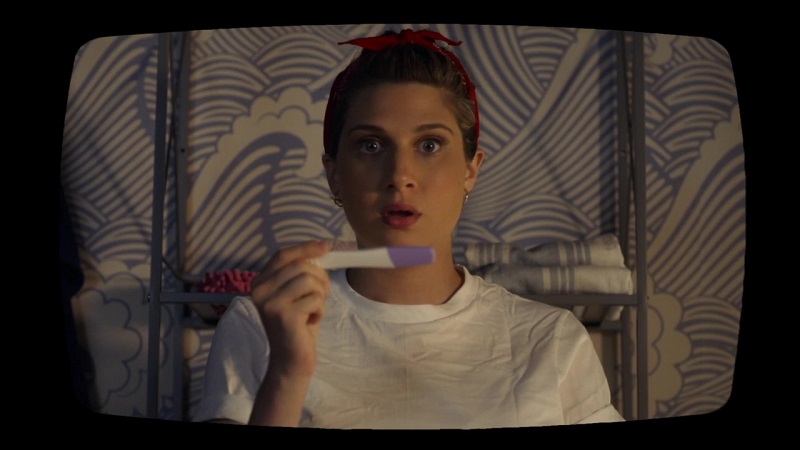 “Your pregnant ass is pregnant?” an incredulous Sky asks in the opening moments of this week’s grown-ish. It feels like Young Ariel is speaking for me, echoing my call from last week to make it make sense. And the show sort of succeeds? Kinda. Maybe.

Nomi explains that after her break-up with Professor Hewson Shane, she met up with Zoey and had a few magaritas… a few too many margaritas, perhaps, as she ended the night hooking up with some random dude. Like me, Zoey’s curious why Nomi didn’t just “uncomplicate the situation” by having an abortion but she avoids giving a direct answer and just says she did what was right for her. Nomi encourages her girls to pretend she’s not pregnant and treat her like “normal Nomi.”

Zoey tries to adhere to Nomi’s request but when the expectant mother is receptive to Ana’s prenatal buffet, Zoey sees an opening to get more information. She asks about an OB/GYN (Nomi is open to Zoey’s mom’s recommendation), how Nomi’s parents about the baby (not great) and who the father is (some dude named Phil). But then, as is her wont, Zoey manages to make Nomi’s pregnancy about her after she discovers that her ex-boyfriend, Luca, knew about Nomi’s pregnancy before she did. Zoey gets all in her feelings about it but Nomi — who strolls into the campus bar unapologetically — reminds her of her tendency to be judgmental.

After getting some perspective from her ex, Zoey sits down and apologizes for making Nomi feel like she couldn’t come to her with her baby news. Still though, Zoey’s committed to being a real friend to Nomi — someone who gives her the unvarnished truth 100% of the time — as they navigate this very difficult situation. The reaffirmation of trust between them gives Nomi the space to share her own unvarnished truth.

“I was just in such an emotionally messed-up place after the breakup, and then when I actually found out I was pregnant, I thought, like, ‘You know, would it be the worst thing in the world to have a little someone who would love me unconditionally?'” Nomi confesses. “And now I’m just worried that that I made a mistake, but it’s too late now. I’m really, really scared.”

The TV has written 119 articles for us.