Previously on Legends of Tomorrow, oh so many months ago, Heyworld imploded and Zari got replaced by her brother in the timeline, Mick came out as romance novelist Rebecca Silver, Sara and Ava were cute cute cute, and honestly nothing else really matters because this show is beautiful chaos and every day feels like a brand new slate.

We pick up post-Crisis, in 2020, where the Legends are a bit famous. After their Heyworld fiasco, they picked up some notoriety, with Nate in commercials, toys based on their superhero personas, Mick Rory presenting an Oscar, etc. And now, a man called Harris is filming a documentary about them called Meet the Legends. To kick them off, Harris asks Ava to introduce herself. 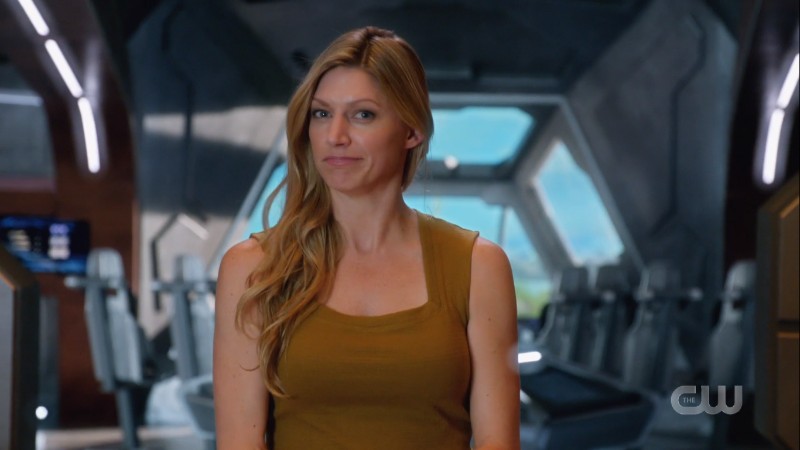 Sara and Ava being able to look directly into the camera/my soul was A LOT to handle on this first episode back.

It is… awkward. But in a cute way. And the reason they’re even letting this documentary happen is that, in order to get the budget they would need to keep the Waverider in the timestream, they have to employ some transparency about what they do and why they need the money. And so, here we are. Well, some of us. The other half of the team is off on a mission.

Nate has become even stranger amidst this fame, really hamming it up for the cameras, but admitting that something doesn’t quite feel right. He doesn’t know why yet, but we sure do, when Behrad, Zari’s brother, strolls in talking about being a future man from 2044 and how he went to see his newborn self in the hospital the other day. (Making him 22, I guess. Which I think makes him the baby of this team.) And it all feels a bit like when Dawn showed up on Buffy and everyone is just acting like it’s normal when you know damn right it’s not.

When it’s Charlie’s turn to be interviewed, she realizes she’s no longer a prisoner, and also she would hate little more than to talk about herself or her past, so she buggers off in the jump ship, which is only concerning because Gideon glitched right before she took off. 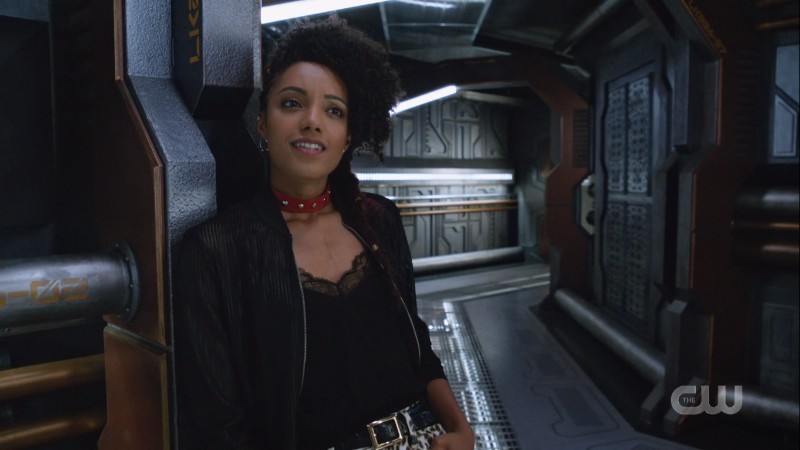 “Gotta go find my girlfriend since these dopes don’t even remember her.”

In the months since we last left the Legends, Mona became Rebecca Silver’s agent, channeling every mean agent you’ve ever seen in the movies, but with an added dash of were-kaupe.

Gary introduces himself as “fully forgiven,” though the text below his screen says, “former villain.” And while I think he’ll be feeling the consequences of his actions for a bit, I do so love that we have our old mononippled nerd back. He’s been Constantine’s apprentice, which ol’ Johnny seems to be taking relatively in stride. That is to say, Gary still seems to have all his teeth, so it can’t be too miserable a time for either of them. (PS. I highly recommend calling the number on the business card and listening to their outgoing message.)

On the Waverider, Harris asks Ava how her girlfriend feels about them filming a Legends documentary, and she admits she hasn’t told Sara yet. 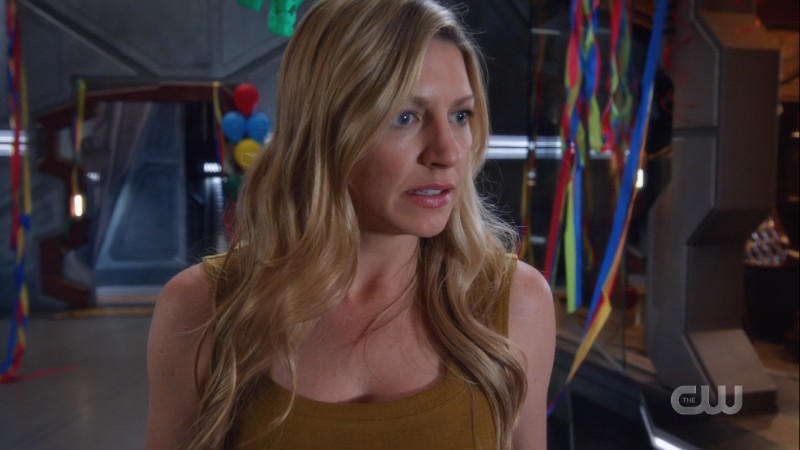 “When will my wife return from the Crisis?”

Which is why they have set up a surprise party during which no one is to mention her fallen friend Oliver Queen, lest they upset the Captain. When they come back, Sara, Ray, and Mick are welcomed back with shouts and cameras. Ava hugs Sara and quickly explains what’s happening. 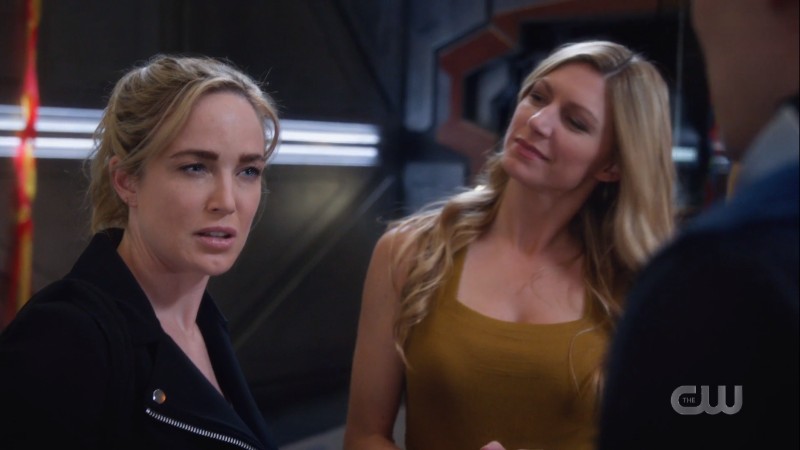 She doesn’t seem down to be on a reality show, but if this was a Real World/Road Rules Challenge, Sara would absolutely SLAY.

Sara is mildly horrified. The last thing she seems to want after a five-episode Crisis is to have a strange man shove a camera in her face. She tells the camera that her girlfriend has lost her mind, and is ironically the only one so far who has managed to speak normally in front of it. 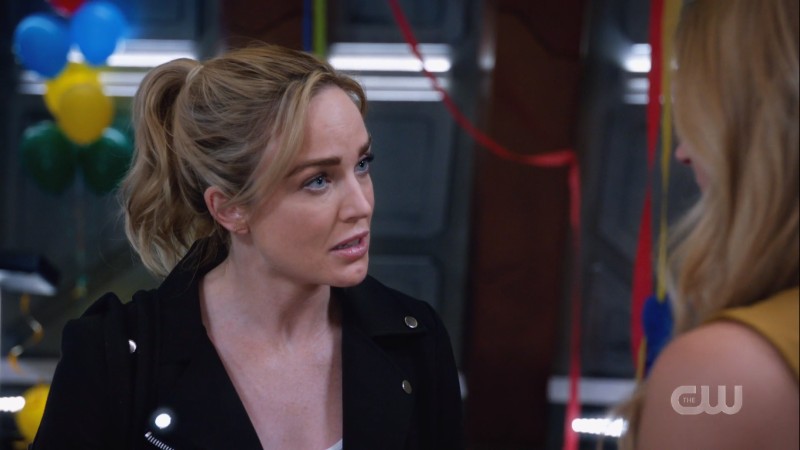 “What if I had shown up in my trenchcoat with even less underneath it this time???”

Ray starts listing off the heroes that guest-starred in the saving of the multiverse, and looks around, landing on Behrad and saying something is missing. But he quickly decides it’s Charlie, who we’re reminded jumped ship and hopefully is not stranded in Jumanji or anything. Ray is excited about this documentary because he could use a little rebranding; see, when the Earths all merged, Earth Prime kept the memory of Neuron possessing him instead of him sharing a face with Superman.

The Waverider hits a timequake that they trace back to St. Petersburg in 1917, and Glitchy Gideon takes them there before Sara gives word, and she is none too pleased about having time traveled with a camera crew. 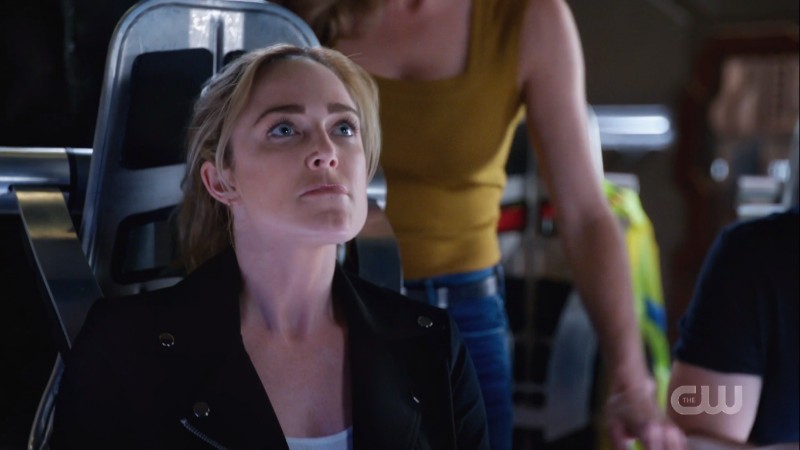 “Starting to wish I’d traded some of these idiots for Kara and Barry, at least they listen to me.”

Sara is feeling overwhelmed as everyone overacts for the cameras, Ray trying out bad catchphrases and Nate trying (and failing) to knock off her patented fingerguns. Ava offers a supportive word and Sara knows all they can do is what they always do.

They all dress the part and head toward the source of the quake and find themselves at Rasputin’s funeral. Nate spouts off some facts about the notoriously hard-to-kill advisor to the Romanovs, Grigori Rasputin.

They head back to the ship to regroup, and Sara loves this; going into full Captain mode will help distract her from ALL THE FEELINGS, so she starts doling out assignments like we haven’t had an eight-month hiatus. It’s beautiful.

Ava is worried about Sara but she’s still worried about bringing it up to her, so she asks Ray instead. He admits that Oliver’s death was hard on her, and she admits she doesn’t know what to do. Mona tells Ava it might help to write her feelings down, and since Ava is a very relatable useless lesbian, she takes this advice from the hopeless romantic and decides to write…a condolence card. 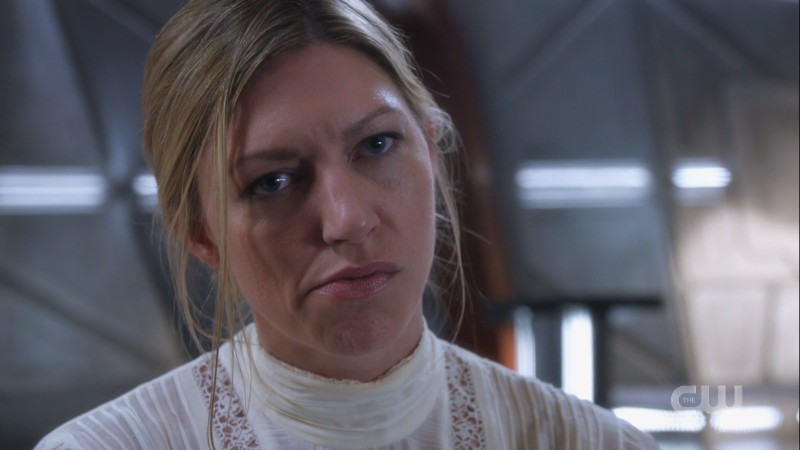 I do this “face to camera” thing all the time IRL but there is never a camera.

Oh and by the way, despite Ray and Nate’s suggestions of Evil Do-Overs or Villa-agains, Mona steers them toward the more succinct suggestion of calling these repeat offenders Encores. And so it is written.

Down on Earth in 2020, Constantine and Gary go to exorcise a demon out of a little boy who is scaling the walls, but Constantine ends up knowing the demon, so he takes the kid out for a drink instead.

Back on the ship trying to regroup, Behrad and Sara have a bit of a heart to heart about how weird everyone is being. He asks how she’s doing post-losing Oliver and she tries to brush him off. He has a gift for her. She says she hopes it’s not a condolence card because those suck and Ava Leslie Knopes her way back out of the room in the background. Instead of a card, Behrad gives her a Lord Mesa cartoon of her, Oliver, and Laurel all together. It’s super cute and as someone who knows how big of an Arrowverse fan Lord Mesa is, and as someone who owns some Lord Mesa fanart herself, I was delighted about this meta moment. 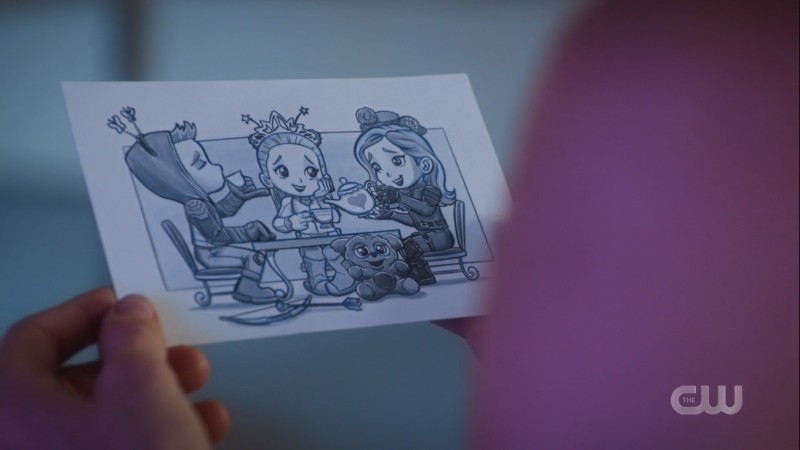 “Perhaps it’s because I’m the one of us to survive.”

Ava does a confessional interview, where she reads the card which is awkward and hilarious and very bad as far as condolence cards go. 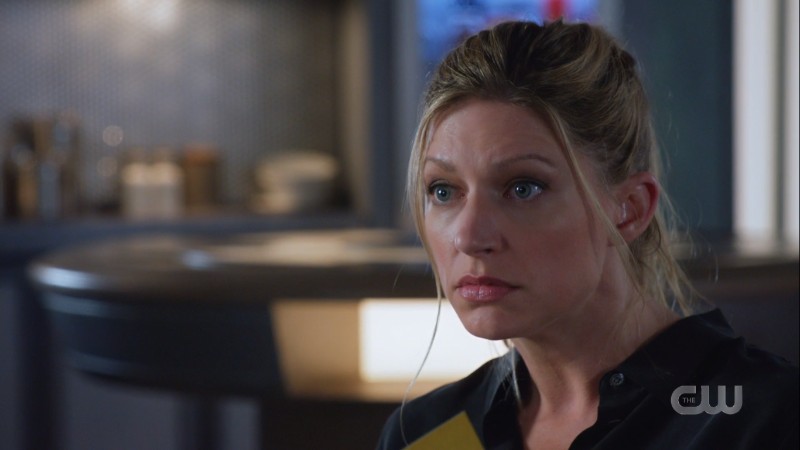 She decides letters aren’t really her and Sara’s love language anyway, and decides the best way to show Sara she cares is to fix the Rasputin situation for her.

So a bunch of Legends head off to enact their own plans for how to stop Rasputin. Nate and Ray by protecting Yusupov, a man who helped assassinate him. Mona by distracting Rasputin with a fake love letter from the tsarina Alexandra.

Ava by killing him dead and making it stick. 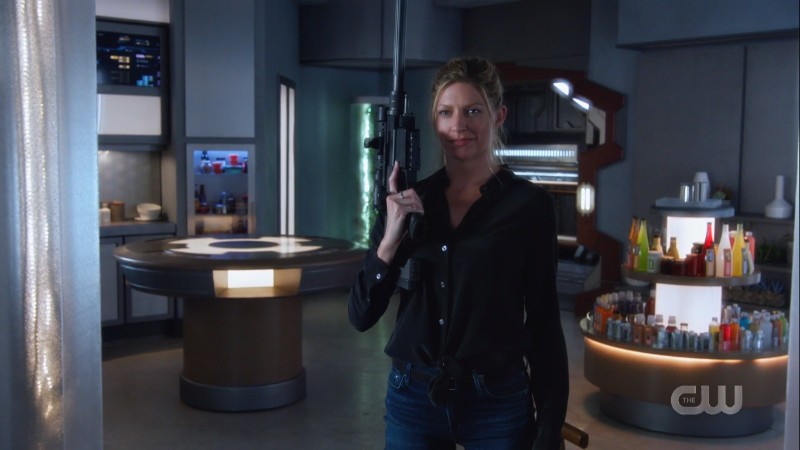 Back on Earth, Constantine is chatting with the demon who is inside the wee child and they talk about how Astra released a bunch of the worst souls from hell but their chits are still in hell so they can’t really die again? It’s a bit confusing but I’m sure that won’t be important or anything… Constantine doesn’t really want to be involved so he finishes his exorcism and tells Gary to get the boy home.

Up on the Waverider, Sara catches the cameras spying on her while she’s trying to have a peaceful moment. 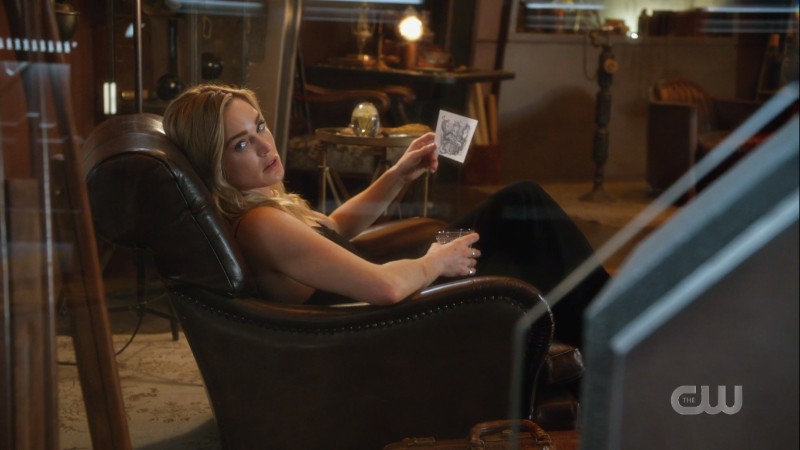 It’s cute how he thought he could sneak up on someone trained by the League of Assassins.

She snaps and starts to give her confessional, looking directly at the camera and telling it how much she hates the idea of the documentary, hates being a celebrity, etc. Before she can start smashing glass, though, Behrad comes in and tells him he thinks he knows what’s wrong with Gideon. But Sara doesn’t want to deal with that right now, she just wants to drink her feelings away.

But then Constantine and Gary call and tell them about the chit-ty situation re: the Encores and interrupts her fun.