Meanwhile in Imperial Russia (lol what is this show), Rasputin hypnotized Nate and helps him remember bits and pieces about the love he forgot. But before Rasputin can tell him Zari’s name, Ava finds a good angle and shoots the zombie mystic… to no avail. He plucks the bullet out as easily as a Revenant shot with a non-Peacemaker gun and a fight breaks out. Realizing they’re outmanned and outnumbered, they rush back to the ship to regroup.

Upon learning that her team went rogue on her, Sara is pissed. She explains what she can about the chit souls and tells them that she’s has quite enough dead loved ones on her hands and would appreciate it if they all stayed alive. While she’s ranting, she snaps that no one even asked how she was doing, and Ava tells her that she asked them not to bring it up to remind her, and Sara points out that she doesn’t need reminding. The pain is still new, and constant, and mentioning Oliver couldn’t have made it worse. 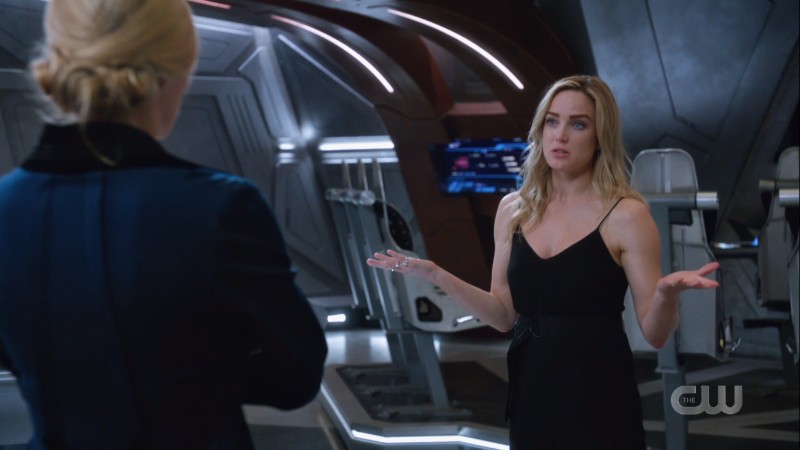 “I didn’t come back from the dead 93 times to be disrespected like this.”

Sara starts to talk about what happened during the Crisis and Ava realized that even though they had all been pretty flippant about the crossover, in reality, Sara’s been Through Some Shit. Sara says, “You can see why I wanted to talk to my friends about it.” She doesn’t want cameras or to ignore her feelings. She wanted comfort and support from her family. And she said as much out loud. How far our little assassin has come. 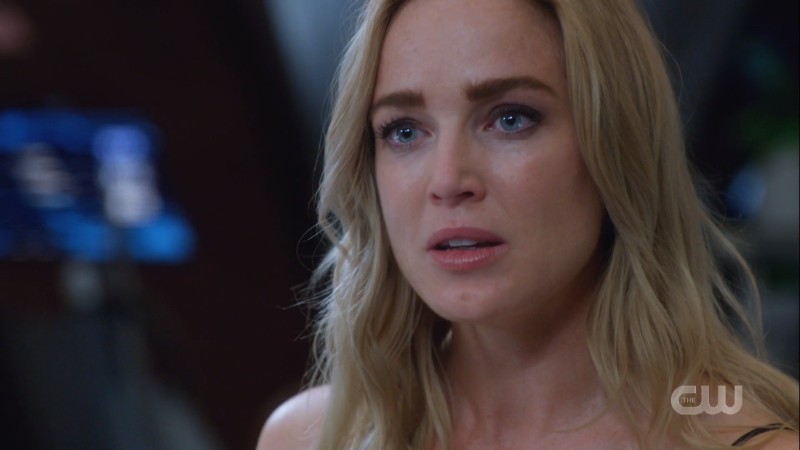 Also, how far Caity Lotz herself has come.

Realizing she handled the situation all wrong, Ava starts to stress clean the Waverider and tell the cameras about bad reviews she’s written about herself and how she just doesn’t know what to do to make things right with Sara. 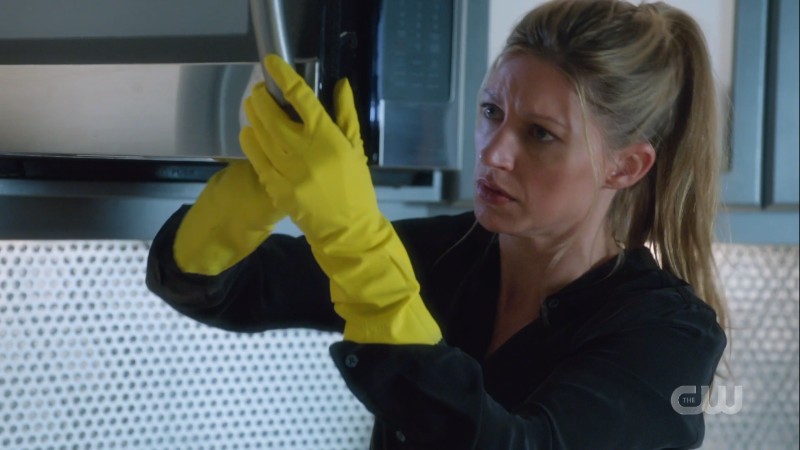 But first, they have to make things right with the camera crew. That they left behind. With Rasputin.

Sara is mad at everyone though, so she decides to just take Behrad, the only one who’s been acting normal to her all day. (Which is hilarious since his mere existence is not normal to the rest of us.)

Sara and Behrad go undercover, her as a waiter and him as a guard and learn that Rasputin is going to kill the Romanovs by way of tea cakes. 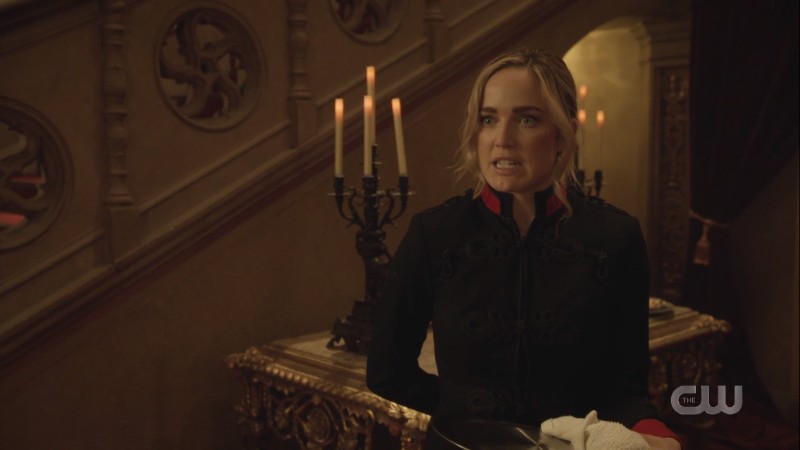 “Those are not cakes! WORDS MEAN THINGS!”

Sara and Behrad look out for them, but without Nate the history buff around (or Zari the treatmaster) they don’t recognize them and the Romanovs almost eat the poison treats. Sara panics and slaps them out of the tsar’s hand while Behrad wind-totems them out of the son’s.

The Legends see all this happening from the ship and Ava is torn; on one hand, her girlfriend is no damsel in distress. On the other, they’re stronger together. 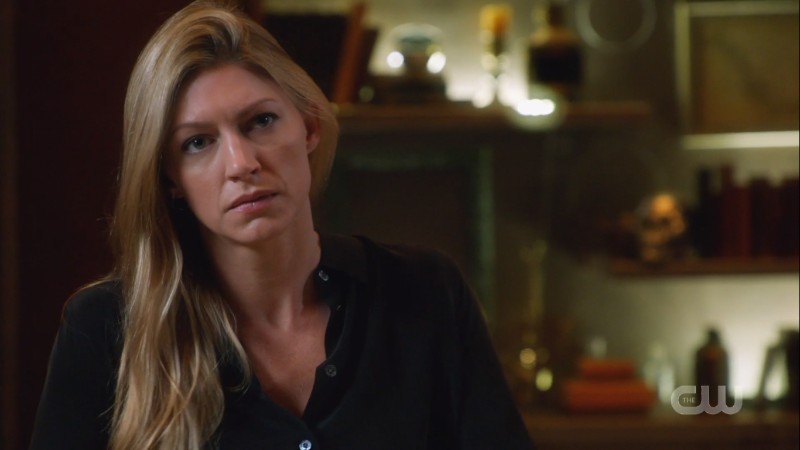 I’d like to interrupt our regularly scheduled program to say: HAIR.

Rasputin hypnotizes his guards, including Behrad, to attack Sara, but she takes them all down with a HA and a HI-YA. As another wave of guards descends, they’re interrupted by Anastasia coming down the stairs. But it’s not the lost princess at all, it’s Ava, and she’s ready to throw down. As the Legends descend upon the enemy, Sara looks up in delight; her family has her back after all.

During a lull in the battle, Ava tells Sara that she wishes she could say the perfect thing but expressing emotion is hard for her. All she wants is to be there for Sara. (During this conversation, they take little breaks to easily take down approaching enemies, barely breaking eye contact, aka one of my favorite tropes of all time.) When they finish a tandem-takedown of the last approaching baddie, Sara says that hearing that Ava wants to be there for her is all she wanted; knowing she wanted to say the perfect words, even if she didn’t know exactly what they were, is all Sara needed.

Sara goes in for the sweeping post-fight kiss… 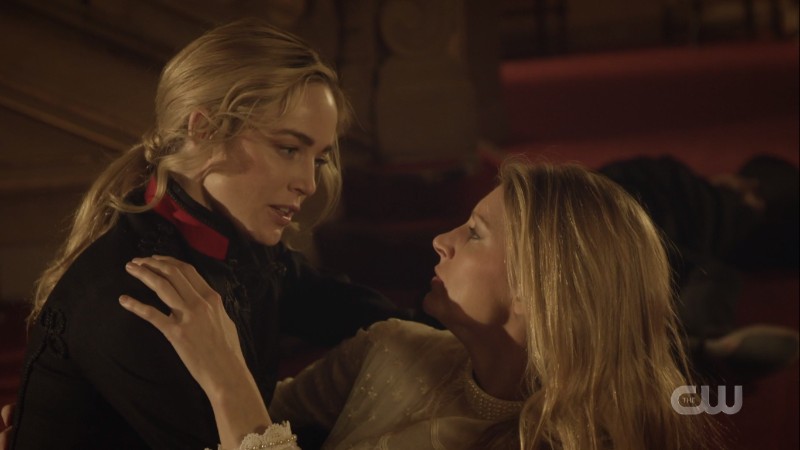 Look at those lil curls! Sara looks like a dapper prince who just hopped off her horse and saved the damsel from her tower but it’s better because they saved themselves/each other.

…but then Ray interrupts.

The rest of the Legends are also hypnotized, so Ray shrinks and Sara tosses him into Rasputin, where he embiggens from within and splatters him across the room. Not one to leave unfinished business, Sara then steals a glance to the camera, sweeps her girlfriend off her feet, and makes sure the curtains close on a kiss. 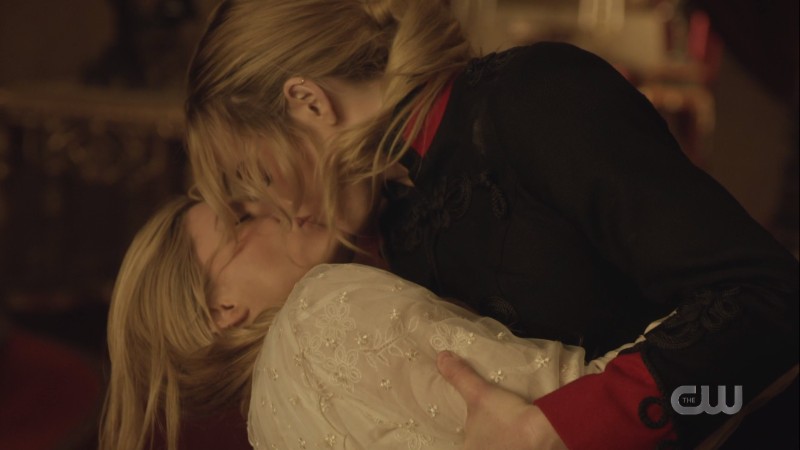 This is what all those years of salmon laddering were for. To be able to dip her girlfriend, no matter how tall.

Then gives the camera a super cute thumbs up. A charming dork, that Sara Lance.

As the documentary voiceovers the final montage, the team puts Rasputin bits into mason jars, Nate tries to make a composite of what Zari looks like, and the Legends celebrate a job well done (and a hiatus finally over.)

Then we pan to an audience, who just finished a screening of the documentary, and an uneasy group of Legends awaiting their panel. Harris tells them to act heroic but Sara and Ava aren’t so sure this is the right path for them. 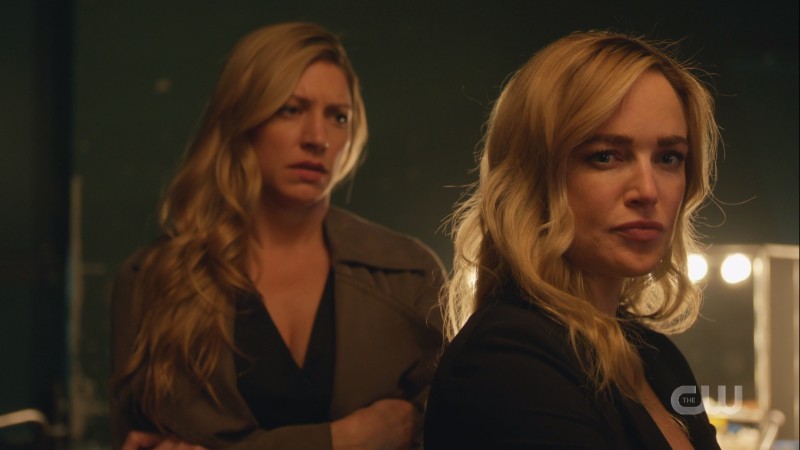 “Eh we watched Batwoman and the whole town knowing about her and expecting things from her seems kind of exhausting? We work better when no one knows what we were SUPPOSED to be doing, so when we do it wrong it doesn’t matter, as long as it works out.”

Sensing her girlfriend’s discomfort, and knowing that her actions speak louder than words, Ava grabs the mic, says everything was fake, and everyone backs her up, much to the director’s horror. Sara is pleased as they declare themselves a bunch of frauds and happily jaunt off stage. 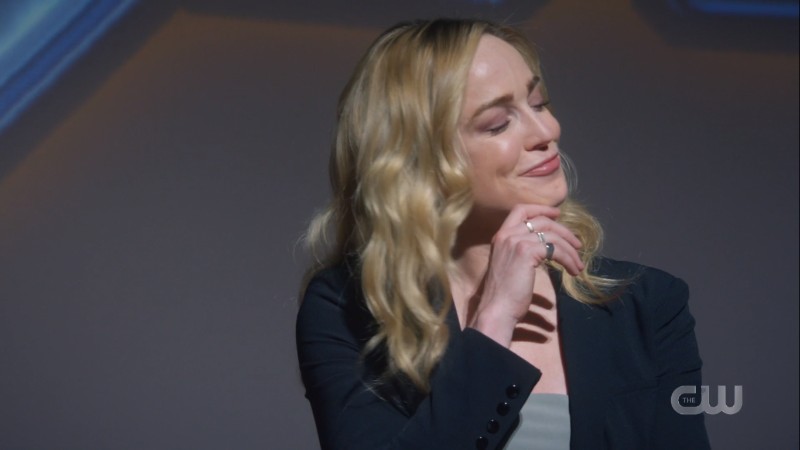 “They may be idiots, but they’re MY idiots.”

The crowd boos them as they leave, but the Legends are thrilled to go back to zipping through time with a cloak of anonymity. They don’t need funding anymore, because Mick is back to his thieving ways, and Mona is taking over the Rebecca Sugar mantle. (Also she decides to go live out in the world to have experiences that will make her a better writer. I kind of hope she’s really gone for a while because she was becoming too much of a cartoon character, even for this show, and this will give her an excuse to come back a little bit… different.)

Constantine busts into the Waverider, much to Ava’s horror, makes himself a magic circle, and chugs a jar of Rasputin, much to everyone’s horror.

He tells them he’s going to hell until “the sigil is complete” and Sara, used to his antics by now, tells him to be safe before waving off that truly insane move.

Then Ava, with only one of many self-burns this show had this episode, says that the events of the Waverider would be really hard for an audience to follow. To which I say, but we wouldn’t have it any other way. 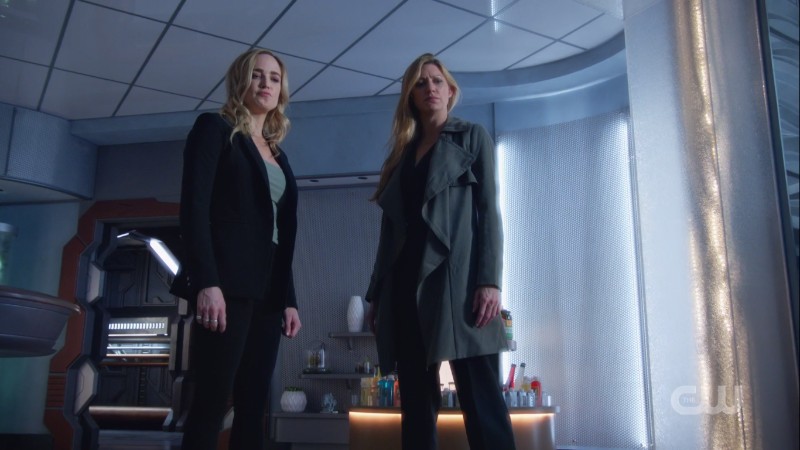 Sara quietly takes Ava’s hand, and I must say, I really love all the little, natural, understated, long-term girlfriendy moves they make.

In the fast-paced world of television, it’s not every day we get a nice, long-standing couple who can do cute things like put their hands on the small of each other’s backs or throw in a stray “babe” here and there and lil tiffs that never make you fear for the fate of the relationship. It’s not the first or only by any means, but it’s still very lovely to behold.

Meanwhile on the ship, Nate and Behrad figure out that Gideon has memories from two timelines jumbling her brain and fix her glitchiness. And one thing I picked up on is that all of Gideon’s glitched-out words aren’t just random Legends-related things. They were specifically related to Zari. First Gideon says the word “totemed” out of context. And as well all know, Zari was linked to the wind totem. Then she says “time loop” a few times, mimicking the time Zari got stuck, and Marion Ravenwood, Zari’s undercover alias. Later, when Sara is fiddling with her innards, Gideon starts repeating, “Wickstable” and “Captain Cat” – references to Zari’s baby dragon and her feline transformation. When Constantine calls, she says she has an incoming “Bollywood,” another Zari-centric plotline. Maybe this was very obvious to everyone right away, but I didn’t realize it until I was rewatching and I got chills about it so I thought I’d share. This show might be ridiculous at every turn, but that doesn’t mean it’s not clever.

Before Gideon finishes erasing the incongruencies, though, she plays a video Zari left for Nate, begging him to find her. But in that moment, Gideon finishes her memory scrub, and the video is gone.

And that’s all she wrote. Can you even believe our weird little show is in its FIFTH season? Can you believe how perfectly Legends this entire episode was? I’m so happy these absolute looney tunes are back and up to their old tricks; can’t wait to see what they get up to next.