The episode opens with Mike, Stef and Brandon in the back of the police car after Brandon has confessed all of his crimes. Mike is all “What?!” and Stef tells Brandon he can’t tell anyone and her calm demeanor seems to scare me more than it does Brandon. The parents get out of the car and Mike says “At least no one knows…” and Stef says, “Ana does.” She explains that Ana asked her for $10,000 worth of hush money and Mike tells her she can’t pay it because that’s a crime and then he says he wants to kill Ana which, apparently, wouldn’t be a crime. San Diego law must be a little different than other places. Stef tells him to stay away from Ana and she’ll deal with it. She also says she wants Brandon to move home.

Mike and Dani argue while Brandon packs up his things. Dani tells Mike she was protecting him and worried about his sobriety and Mike tells her to get out, “We’re done!” Dani cries and scuttles away.

Stef gets home and tells Lena that Brandon is coming home. Lena wonders if that’s a good idea and Stef says, “Callie and Jude are being adopted on Monday so he’s gotta get over it.” Yeah, that’s worked so far. Lena wonders why Brandon was selling fake IDs and Stef cleverly avoids answering by saying, “What happened to our son?” 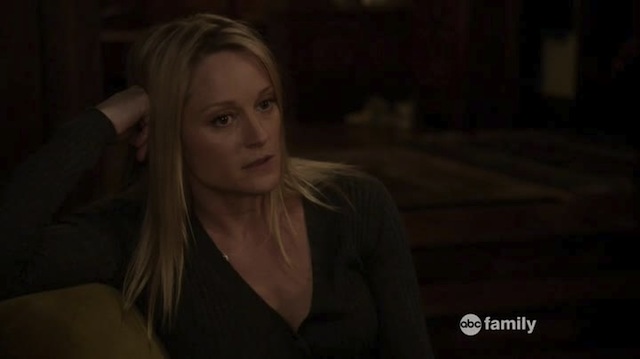 Clearly good decision making does not run in this family.

Mariana shows up at Zach’s house which looks like it was decorated by Gay Yosemite Sam. Bang bang! Salmon paint! Wagon wheels! Amanda answers the door and is the sweet version of herself and calls for Zach. Mariana asks if she forgets him sometimes and thinks he is his dad sometimes and he says, “Yeah.” Mariana says Amanda needs help and Zach tells her that she has early onset Alzheimer’s Disease and he needs to take care of her. Mariana says, “But who’s going to take care of you?”

Digression 1: I was actually hoping they were going to go the Alzheimer’s route rather than some unspecified mental illness. I was an Adult Protection investigator for 15 years and worked with many people and families dealing with Alzheimer’s Disease. Sadly, the agitation and marked personality changes are true hallmarks of the disease. Obviously, things have been exaggerated here to some degree but it’s actually a fairly true depiction of some of the more extreme cases.

Stef visits Ana and tells her she’ll get her the money and adds, “I’ll get you that $10,000 and I never want to see you again.” I should be focusing on how scary she is but I’m distracted by her jean jacket and then start wondering if I should start wearing a jean jacket again and then I remember my last jean jacket (from the Gap, purchased my last year in high school) and I miss it. That’s right — the characters on this show abusing their power has become so commonplace that I am now desensitized and can only think of denim.

Connor and Jude are playing video games when Mariana comes in smiling and tells Jude he has a call. Connor gets a weird child actor look on his face which means that we can’t read it — jealousy, confusion, gastrointestinal distress? Who knows. Mariana tells Connor it’s a girl. 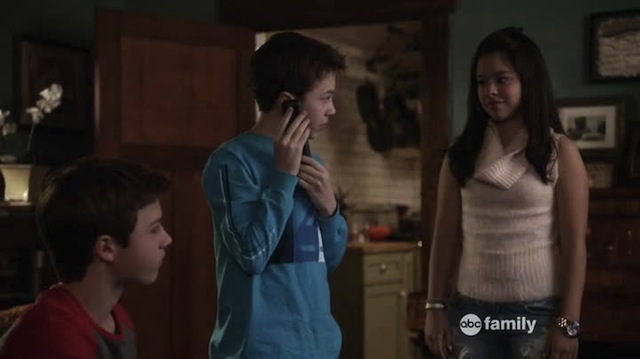 It’s like that game Mystery Date in real life–who is that character on the phone?

Mariana suggests that Jesus give Jude advice on girls and he says, “Emma seems to think I’m more of a jackass than a jack of hearts.” She says that he has been a jerk and suggests that he go back on his medications because she wants her brother back. She shouldn’t worry — she has extra brothers lying around.

Jude goes back to Connor and tells him Maddie asked him to a movie. Connor asks if he likes her and Jude says, “Not like that.” He asks Jude if he is sure and I am certain this is when Connor is going to ask Jude out and instead, he drives a stake through Jude’s heart and mine when he says, “Then is it ok if I ask her out?” Jude says “Sure,” which clearly means, “What? I thought maybe we’d ride off into the video game sunset together!”

Mike goes into Brandon’s room while he’s packing and Brandon says, “I didn’t think…” and Mike says, “No, you didn’t.” He tells him how disappointed he is and then walks out.

Lena meets Timothy to review the donor contract and he tells her he can’t sign it but we all knew he was going to say that, right? He says, “I think it would destroy me.” Lena’s looks is a combination of “I am so disappointed” and “Stef is going to fucking kill me.” Lena goes home and tells Stef who says, “What if you’re already pregnant?!” Lena stopped at Urgent Care on the way home for a blood test like it’s some kind of Kum-N-Go for healthcare. Stef knew they shouldn’t have inseminated before he signed the contract. 1 point Stef! Lena gets defensive and and points out that Stef was the one who said they should go ahead. 1 point Lena! Lena says, “If you don’t want me to have a baby, you need to say it.” Stef tears up and says, “I don’t want you to have a baby, Lena.” Nobody wins. 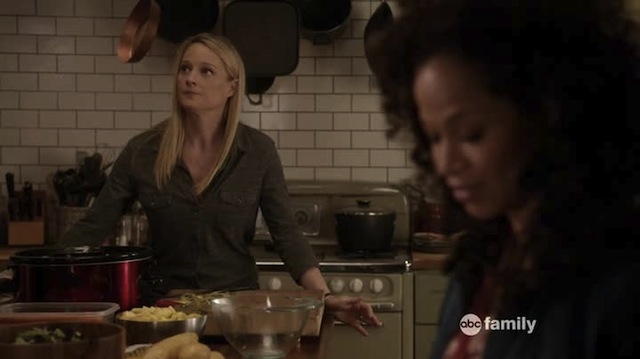 Brandon is playing the piano when the doorbell rings. He answers the door and Callie is standing there looking like a character from Breaking Amish. She tells him she had a flat on her Amish wagon and, since she was in the neighborhood, she thought she’d tell him the adoption is Monday. She feels like she’s done nothing but mess up his life but, really, he’s been doing that all on his own. She says she wants to be a part of the family more than anything she’s ever wanted but doesn’t want to hurt him. He assures her she isn’t hurting him and then they hug and — because this show has ruined me — I worry they’ll kiss. But they don’t. Whew.

Lena is locked in the bathroom and Stef says, “Lena, honey…” Lena comes out and says, “Well, you’ll be happy to hear I just got my period.”

Digression 2: I spotted for the first 11 weeks of my first pregnancy and, during that time, I thought I miscarried but it turned out that I was just really sick from eating a bad buffalo chicken sandwich. My point is that Lena getting her period is too good to be true and exercise caution when eating buffalo chicken sandwiches.

Stef apologizes and says, “I want you to have everything you have ever wanted, Lena.” Therein lies the problem with Stef, Lena and the inability to be completely honest. But Stef admits that the thought of a baby overwhelms her since the kids are having problems. Lena says they are just teenagers, having teenager problems but I don’t think running away, theft and witness tampering (to name only a few) are typical teenager problems. My biggest problem as a teenager was learning to use a curling iron without burning my forehead. Stef tells Lena about Brandon and Ana and the $10,000 and tells her she’s going to meet with Ana, wear a wire and catch her extorting money from an officer.

Dani goes to Mike’s to get her stuff and finds Brandon drunk on microbrew and potato chips. He tells her about Callie and she takes the bottle from his hand and says she doesn’t want him to ruin his audition for the symphony which is the next day. She leads him to the bedroom and  puts him to bed and sets his alarm for his audition and walks out of the room, apartment, our lives forever. Dream on. Let’s all close our eyes tightly and think kittens and flowers. Don’t think of bunnies. Because you know what bunnies do. They go at it on someone’s big boy bed. 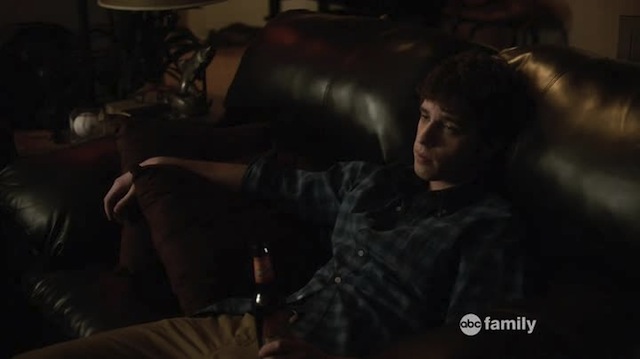 Obligatory picture of Brandon and his questionable life choices.

The next morning, Brandon’s alarm goes off and he’s in bed alone. Mike never came home and Brandon has a drunk message from him apologizing. Brandon leaves a message for Dani saying he’s worried about his dad.

Maddie asks Jude if he talked to his moms about the movie and he says he can go. Connor overhears and tells Jude he can’t come to the adoption because it’s for good friends and he’s obviously not a good friend. Why can’t anyone on this show ever have good things?!

Brandon is at his audition, waiting his turn, when Dani texts to say she knows where Mike hangs out and she’ll find him. It’s his turn and he plays and Stef walks in to listen which mirrors the first episode of this series which seems like four score and seven years ago.