Jesus tells Emma he is back on his meds and  he wants to wrestle her and they kiss, proving once again that I don’t understand romantic pick up lines.

Vico and Brandon wait outside Principal Sanchez’s office. Vico blames Brandon for the whole mess but says his parents are taking care of it because they are the head of the Parent Teacher Mafia. Brandon says he can’t believe Vico is going to get away with it and Vico gives a sad story about his dad being awful and squashing his dream and I can’t feel sorry for him at all.

Lena gets home and finds Jude painting his nails. He asks her when she knew she was gay and tells her about Maddie and that he got jealous when Connor wanted to go out with her.  He says, “I don’t think I’m jealous about Maddie.” Lena smiles and says that everyone gets jealous and it doesn’t necessarily mean anything but they’ll love him no matter what. It’s a sweet scene that calls back to earlier in the season as well. Circles. All the circles. But not the kind that Papi gave Alice.

Mariana is at Zach’s house and he says Amanda was ironing and he came out of his room and she didn’t know him and she hit him. He has a huge mark on his face. Mariana says, “This is not ok.” He then calls his dad and asks for help and a single tear rolls down Mariana’s cheek and the scene is so sweet and heartbreaking. 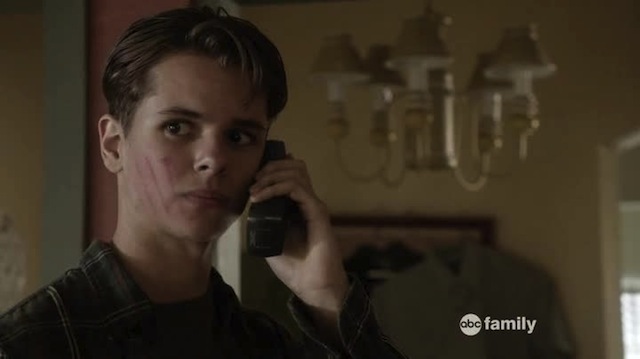 At least some characters are growing in response to challenges.

Stef is at the diner waiting for Ana who is late. Dani calls Brandon and says she found Mike. After she hangs up, she turns and Mike is passed out on the bathroom floor. Stef goes to the halfway house to ask about Ana and a guy tells her that she didn’t come home the night before and, when last seen, she was in a screaming match with a guy. Dani helps Mike off the floor and washes blood off his hands and asks, “What happened? Were you in a fight?” As you can tell, this is all very subtle.

Stef shows up at the courthouse where all the Fosters and Fosters-t0-be are waiting for court. Stef says, “Hi babies.” I’m always a sucker for that. Lena pulls Stef away and says that Principal Sanchez isn’t doing anything about Brandon or Vico and then asks if Stef met with Ana. Stef explains that Ana didn’t show. Stef says, “Are we ok?” Lena says she thought about what Stef said and she’s right — the kids they have need them. Stef gets teary and says, “Really?” and Lena says, “Really.” They clasp hands and I think ,”Wow, I’m surprised they took the less dramatic way out of this storyline. Kudos writers! Let the queer ladies across the land raise their glasses in celebration!” And then Lena says, “It’s just that I heard back from the Urgent Care and I didn’t start my period. It was spotting because I’m pregnant.” Stef tears up again and stumbles over her words and then says, “I feel nothing but love right now, baby!” and gives Lena a big kiss and cries and adds, “Love for you and this beautiful baby we’re gonna have.” I teared up because I am a sap but also because it was very well acted and believable.

Digression 3: I remember the precise moment I decided I wanted a second child. My son was 15 months old and we were talking about animals and babies and I said, “And otters have…” and he said, “Whelpths!” It was such a sweet and perfect moment and I thought, “I want to do this one more time.” We’d never planned to have another and my partner wasn’t sure but, when that pregnancy test turned positive, there was no doubt and I saw a bit of that moment reflected in this scene.

A woman asks to speak to Stef and Lena and then Stef and Lena ask to speak to Jude and Callie and this can’t be good. Turns out there was an issue with Callie’s birth certificate. They only had copies and they needed an original. The original showed she has a different dad, Robert Quinn. So, Jude can get adopted but Callie can’t. She tearfully tells Jude, “Today is your day.” She asks for a moment and goes outside. Rita the Wise follows her and gives a long speech about luck and it’s clunky so I nap. When I wake up, she tells Callie that she has to stick around even when it’s hard.

Stef, Lena and Jude are signing the adoption papers and Mariana puts her head on Callie’s shoulder and the group home kids are all giddy and there are pictures and…I cried. I cried a lot. I cried so hard I had to stop watching. 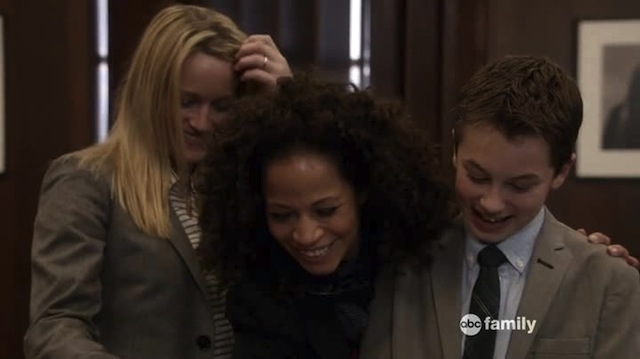 Part of the happy family.

Digression 4: In my defense, my partner only returned last night after 3 weeks in Africa and I am exhausted and when I’m tired, I cry. However, I also remembered being in a similar courtroom twice — once for each of my kids. I remembered our friends and family being there and holding our kids as the judge asked me to give up my parental rights as their birth mother and then give us both rights as their two legal parents. And I thought about all the things that have been hard about the past 3 weeks —about the arguments over homework and bedtime and soccer practice — and how it is easy to lose perspective. So yeah, I cried because family and love can be messy.

There is a big celebration in the Great Lesbian Kitchen and everyone — including the kids from the group home — is laughing and having snacks and there is a cake that says, “Welcome to the family Callie and Jude.” Lena says to Callie, “It’s still true, ya know.”

Digression 5: My sister threw our first baby shower and while she ran errands for the party, my brother-in-law picked up the cake. We already knew we were having a boy and had already chosen the name Miguel. When my brother-in-law got home, he opened up the cake and called my sister to tell her how beautiful it was and then said, “But is Mandy a nickname for Miguel?” My sister said, “WHAT?” He said, “The cakes says ‘Best Wishes Mandy!'” No joke.

Brandon finds Callie playing guitar and he suggests they play together someday. She asks about his audition and he says, “Oh, I got it.” He leaves as Wyatt enters and Wyatt asks if the adoption falling through changes anything with Brandon and she says, “No, it doesn’t change anything.” I really want to believe her.

Brandon arrives at Mike’s and Vico and friends jump him and then Vico slams Brandon’s hand in the car door.

Thus ends Season 1 of The Fosters!