Earlier this year, a ruling in Lebanon advanced the cause of LGBT citizens by simultaneously addressing sexuality and gender identity. On January 28th, Judge Naji al-Dahdah terminated a case involving an unnamed, self-described trans woman accused of having a same-sex relationship with a man. The judge’s decision was made public in a report this month.

The defendant argued that she was born with “incomplete genitalia“, but her personal status registry described her as male. She further explained that she transitioned in the 1990s, undergoing bottom surgery. Prosecutors, who clearly conflated gender identity and sexual orientation, sought to use Article 534 of the Lebanese Penal code, which criminalizes “unnatural sexual intercourse,” punishing offenders with up to a year in jail.

In spite of prosecutors’ attempts, al-Dahdah rejected this argument, referring to a court case in 2009 that negated the legitimacy of Article 534. In 2009, Judge Mounir Suleiman from the Batroun court district decided that consensual homosexual relations are not unnatural, and thus not prosecutable. Resulting from a legal campaign launched by Helem (Arabic acronym for “Lebanese Protection of Lesbians, Gays, Bisexuals, and Transgenders”) that sought to annul Article 534, Judge Suleiman stated that “man is part of nature and is one of its elements, so it cannot be said that any one of his practices or any one of his behaviors goes against nature, even if it is criminal behavior, because it is nature’s ruling.” In this 2013 case, Judge al-Dahdah found that Article 534 does not clearly articulate what constitutes as “unnatural.”

While wonderful that al-Dahdah’s order legalized homosexuality, the judge’s final ruling made really significant strides for the recognition of trans* rights. Also influenced by Helem’s previous legal campaign, Judge al-Dahdah pronounced in his final ruling that, “Gender identity is not only defined by the legal papers, the evolution of the person and his/her perception of his/her gender should be taken into consideration.” This resolution expands upon definitions of gender in a legal context, demonstrating that an individual’s gender identification is not as simplistic or reductive as what that person is assigned at birth. 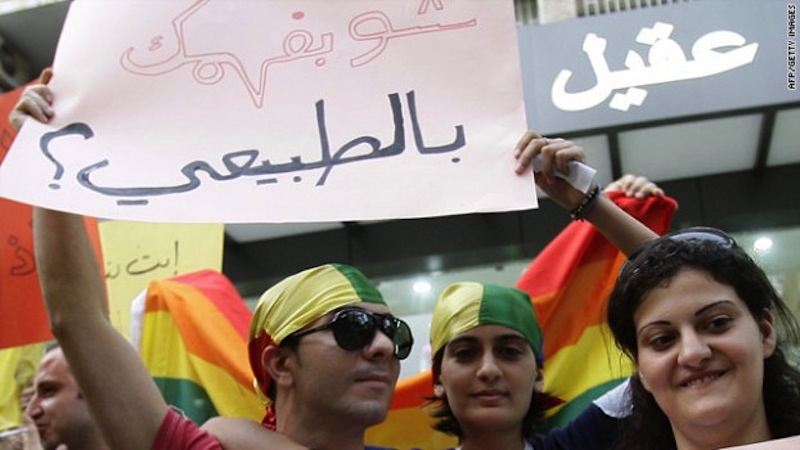 Protestors gathered in Beirut, Lebanon at the International Day Against Homophobia in 2010. Their sign reads, “What do you know about normal?”
via muftah.org

It’s important to celebrate this victory for trans* communities as well as LGB people in Lebanon, but this case did not progress without any pitfalls. Even though al-DahDah’s statements about gender identity reimagined trans* rights in the legal sphere, he did refer to the defendant as “male” before switching to “he/she”, which blatantly ignored how the defendant identifies. Furthermore, various news outlets like PolicyMic, Daily Star, and the HuffingtonPost (all referenced throughout this piece), disregarded the crucial role of a trans individual in this case in the headlines, reducing this triumph to a homo-centric victory for LG (and maybe B, if you want to assume these news sources thought that far) people.

Keeping in mind that the legal dispute made a lot of basic errors in treating the defendant’s gender identity, this trial in Lebanon perhaps does suggest a different framework for LBGT rights. As Erin Kilbride discusses in her piece, “Lebanon Just Did a Whole Lot More Than Legalize Being Gay,” in the West, we often approach LGBTQ rights in a hierarchical way. When white cis-gay men and cis-lesbian women gain rights, then cis-gay men and lesbians of color can talk about their issues; once cis-lesbians and gay people gain their rights, we maybe can consider the issues bisexual people face; if we successfully touch upon LGB concerns, then we finally will have time to address difficulties trans* communities deal with. This “trickle-down” idealization of progress doesn’t actually change the game because it depends on prioritizing certain identities over others.

The Lebanon case presents us with legal proceedings where the sole focus and settlement did not reside on decriminalizing homosexuality but also on recognizing the nuances of gender identities. Of course the court case reminds us that our communities have a long way to go in properly respecting identities that don’t fit neatly into heteronormative and even homonormative gender constructs, but I think it also opens up the possibilities for simultaneous LGB and T work, instead of creating hierarchies of equality rights.