Happy Friday and if you’re in the United States, happy beginning of a long weekend! We hope you’re able to enjoy it! Here’s what happened on TV this week:

TIIIINA!!! Ok, you’d think we’d be tired of making the L Word joke by now, but the unexpected return of Laurel Holloman to The L Word: Generation Q really shook us all the way down to to our Doc Marten boots. Riese covered the full rollercoaster of emotions, and then Drew and Annalyssa covered you even more during the podcast (speaking of Gen Q, you heard they got picked up for a Season Two by now, right? Along with the really great and queer Work in Progress? If you missed it, Carmen has the details). Speaking of addictive drama that you can’t get enough of – that new Netflix reality TV show The Circle sure was the bisexual chaos you’ve been waiting for. Over in the Arrow-verse, there many crises happening on many earths (an infinite number, you could say) but we hear all the gays made it through safely in the end and Valerie Anne can tell you more. Last thing! Good Trouble is back and Alice’s ex has a crush on her mentor, who stole the ex of her current partner? Lesbians! We are who we are.

+ Remember Project Blue Book? No? Well Ksenia Solo kisses a girl and I guess she’s been brushin’ up to do it again. I will fast forward through boring men for you once again, my friends, don’t you worry. — Valerie Anne

Fresh off a summer abroad, Zoey Johnson steps off the plane and back into her life at Cal U. She’s greeted at her inexplicably lavish off-campus home by her new roommates — Sky, Jazz, Ana and, much to my surprise, Vivek — and the bootleg BeyChella happening in their backyard. After dispatching her latest bit of boy drama, Zoey and her crew enjoy the party and swag surf into their junior year. But then comes the world’s loudest record scratch… as a late arriving Nomi passes through the gates, wearing a hideous shirt that barely covers her protruding belly. 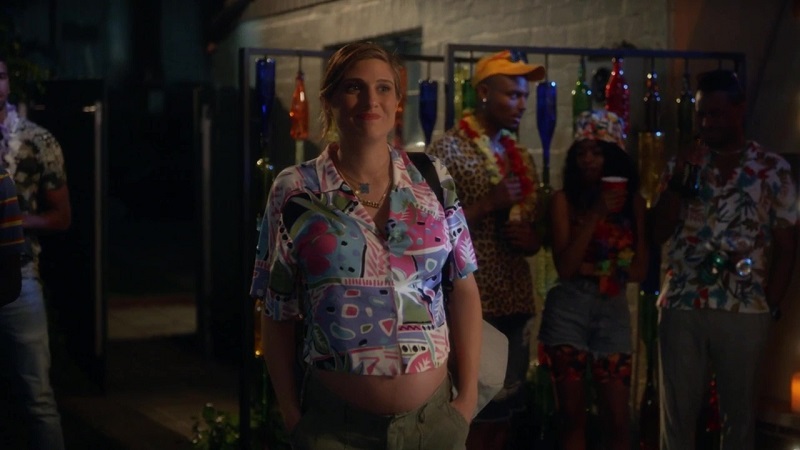 Previews for this season of grown-ish had teased that one of the girls would turn up pregnant so that, in itself, wasn’t a surprise. That it would be Nomi, who last we saw was grappling with the fallout from sleeping with Professor Hewson Shane, was a surprise. But the fact that Nomi is visibly pregnant — she honestly looks like she might pop tomorrow — isn’t just a surprise, it’s virtually impossible.

Let’s be generous and say Nomi’s six months pregnant. Unless Cal U has the longest summer breaks in the history of college, Nomi would’ve gotten pregnant sometime between her bedding a parade of women and having an affair with her professor. At no point during any of that, did we see Nomi sleep with someone who could get her pregnant.

But okay, let’s allow for the possibility that grown-ish missed the boat by failing to show Nomi sleeping with guys or cheating on Shane and got pregnant (yay for bi invisibility!): are we to believe that Nomi didn’t know she was pregnant, even though it appears she would’ve been, at least, three months pregnant when the semester ended? Or are we supposed to believe that Nomi Fuckin’ Segal, who spent two seasons worried about not living up to parents’ expectations, found out she was pregnant and wouldn’t exercise her right to choose? 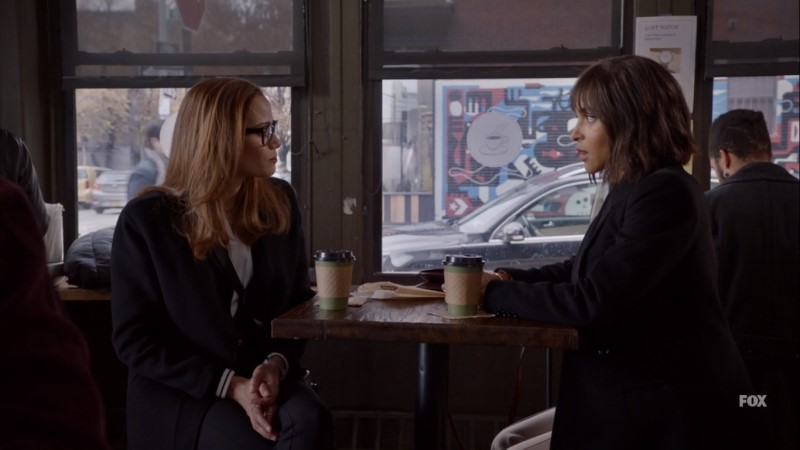 New idea: let’s cast Victoria Cartagena in a show where she plays a lesbian but this time she’s the lead so they can’t keep doing her dirty like this.

This week on Almost Family, Edie moved out of Amanda’s apartment to give them a little space to figure themselves out, and because living together while on opposite sides of the same legal case. All very reasonable. But then over the course of the episode, Amanda I guess got spooked? I don’t really understand the trajectory because Tim was being kind of a jerk, and then Edie was being weird about him dating, and next thing you know they’re having sex while Amanda calls her to beg her to come home. IT HURT MY FEELINGS. And was extremely frustrating because of how much they’ve been throwing “lesbian” around to describe Edie, and kind of made it seem like she was never really physically attracted to her husband the way she was Amanda. But now who knows what’s going on with Edie! I know Almost Family was all but cancelled, so it’s likely not long for this word, but if Edie doesn’t learn the word “bisexual” before this series is through, I am going to be FURIOUS. Also someone give Amanda a hug, ffs!

Legacies 209: “I Couldn’t Have Done This Without You” 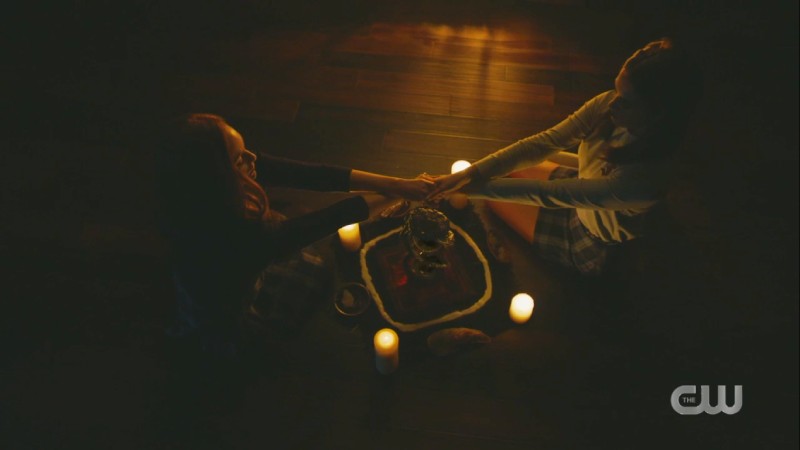 All they need is a Miss Kitty Fantastico and we’re good! to! go!

Y’ALL. ARE THEY GONNA?? This episode had a very sweet and mature conversation between Josie and Hope about how Hope thinks Josie is more powerful than she knows, about dark magic and jealousy, and about how they wanted to move forward, toward each other, because they don’t like not being in each other’s lives. The episode ended with Josie and Landon working together to make Hope’s room feel like home again now that she’s back for good and then Hope hugged them both at the same time with this warm smile we rarely see on our tortured lil tribrid, and maybe it’s because I’ve been watching GenQ but maybe it’s because I believe in the “when in doubt, throuple it out” methodology but if any CW show was going to try to explore teens in a healthy(ish) throuple situation (not unlike Siren’s throuple on Freeform!) it would be the one with the queer magical boarding school. I find Lizzie’s description of Landon as a sentient jar of artisanal mayonnaise to be most accurate, but if we have to keep him around, why not also get a little #Hosie action too? When they did magic together in this episode, it was VERY reminiscent of Willow and Tara and I have a feeling that wasn’t an accident, is all I’m saying.