Hello and welcome to the sixth recap of the first season of The L Word: Generation Q, brought to you by the same network that brought you The L Word, a thrilling television program about a seemingly mousy bookworm who weasels her way into an assistantship to her favorite author that eventually lands her in the director’s chair of said author’s first feature film after manipulating and maneuvering the beloved author out of her own film via saucy sex tape, at which point she removes her glasses, revealing herself to be actually a very pretty girl, and then speaks to herself softly in a dark, empty room. Cut, print.

Friends, this recap is later than usual. The reason is that Showtime withheld press screeners this week. We were like, “hmmm, I wonder why they’re doing that,” and the answer is…. 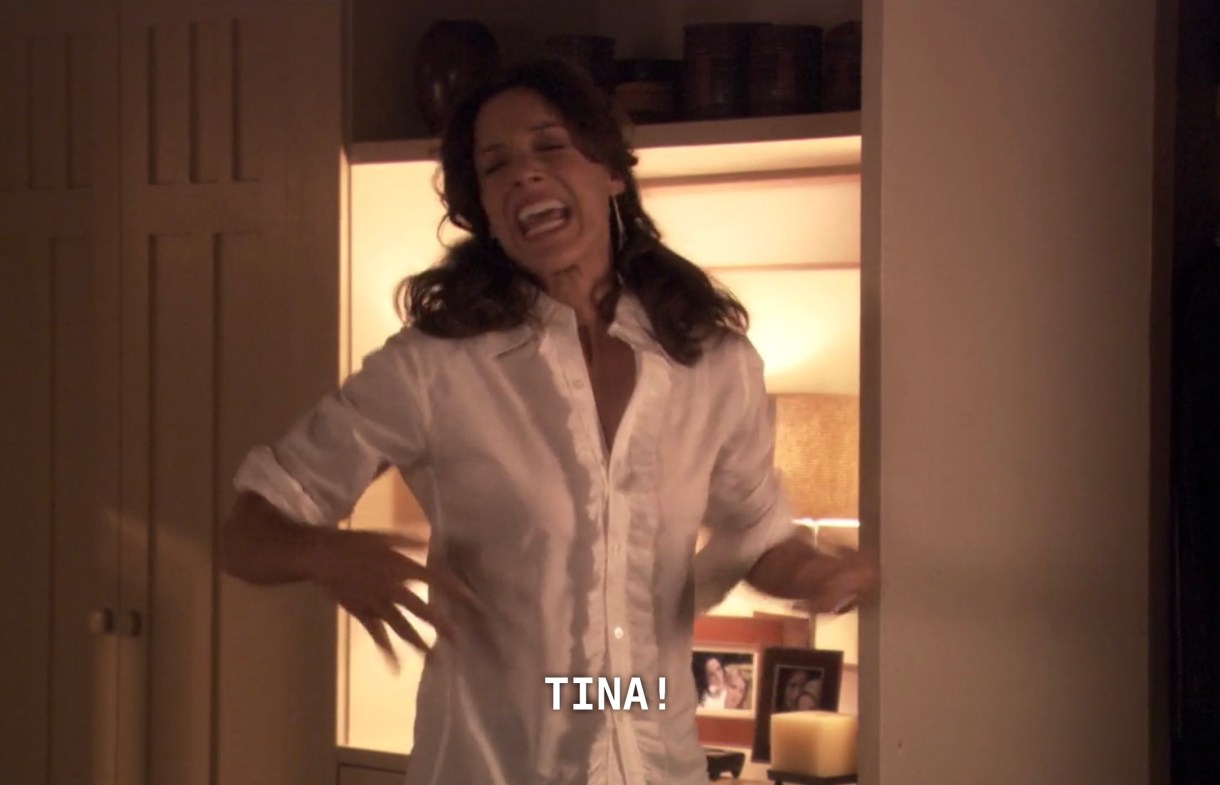 We open on a typically calm, quiet street of sunny Los Angeles, California; which has been OVERTAKEN by ravenous news anchors, eager to take a giant bite out of Bette Porter’s latest scandal. Despite denying an ongoing relationship with Felicity American Girl on The National/Regional Morning Coffee Late Night Aloce Show, a recently released iPhone video has revealed an intoxicated, belligerent and abusive white man accusing Bette Porter of still sleeping with his wife directly before physically assaulting her teenage daughter! How will Bette Porter answer to these claims!! Alice and Shane arrive on the scene and fight off the paps to find their distraught friend Bette inside with her team.

We are live outside Ilene Chaiken’s mansion asking the question that’s on every lesbian’s mind today: Will Generation Q be picked up for a second season? 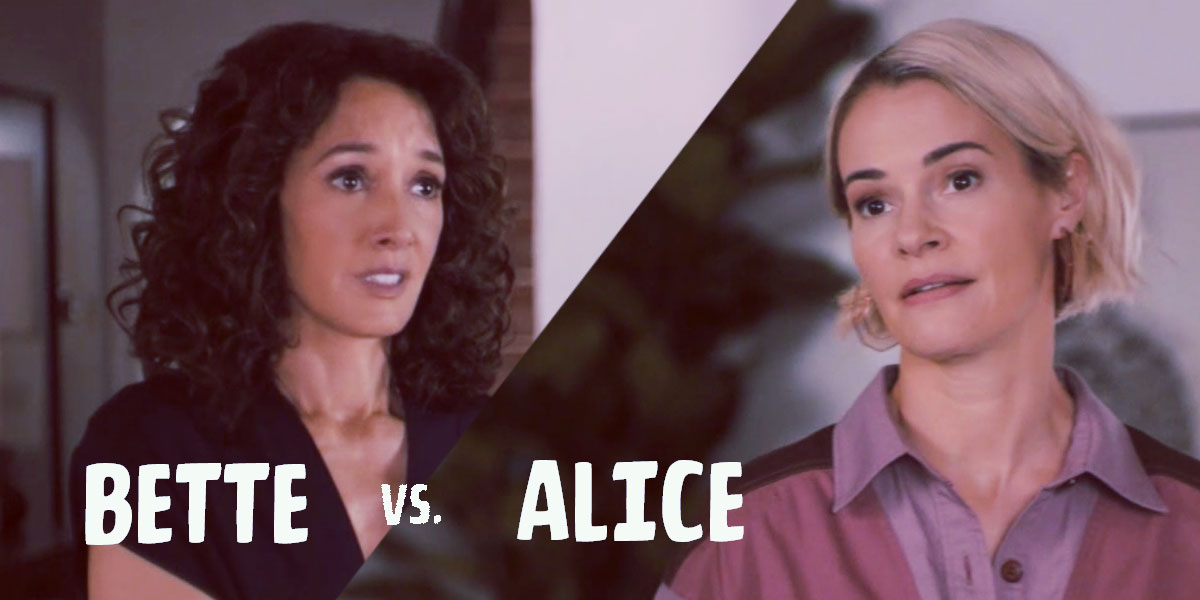 Lesbian Squabble #17: Poppy Mad Lesbian
In The Ring: Bette vs. Alice
Content: Alice is pissed that she lied about Bette seeing Felciity on her show and ALSO that Bette didn’t tell them she was seeing Felicity. However, Alice quickly realizes that Bette DID tell Shane, which should not surprise anybody who saw The L Word: Original Recipe. Shane gets to know everything, Alice! Those are the rules. In addition to being mad, Alice is now also surprised! And so she storms off.
Who Wins? Um, Jeff Milner?

Bette’s slowly eroding on the inside — after telling Shane that Angie stayed at Jordi’s last night because her recently-assaulted daughter can have an illicit sleepover as a treat, she recalls that today is Angie’s drivers test and how the hell is Bette gonna get out of the house into her car and all the way to the DMV? 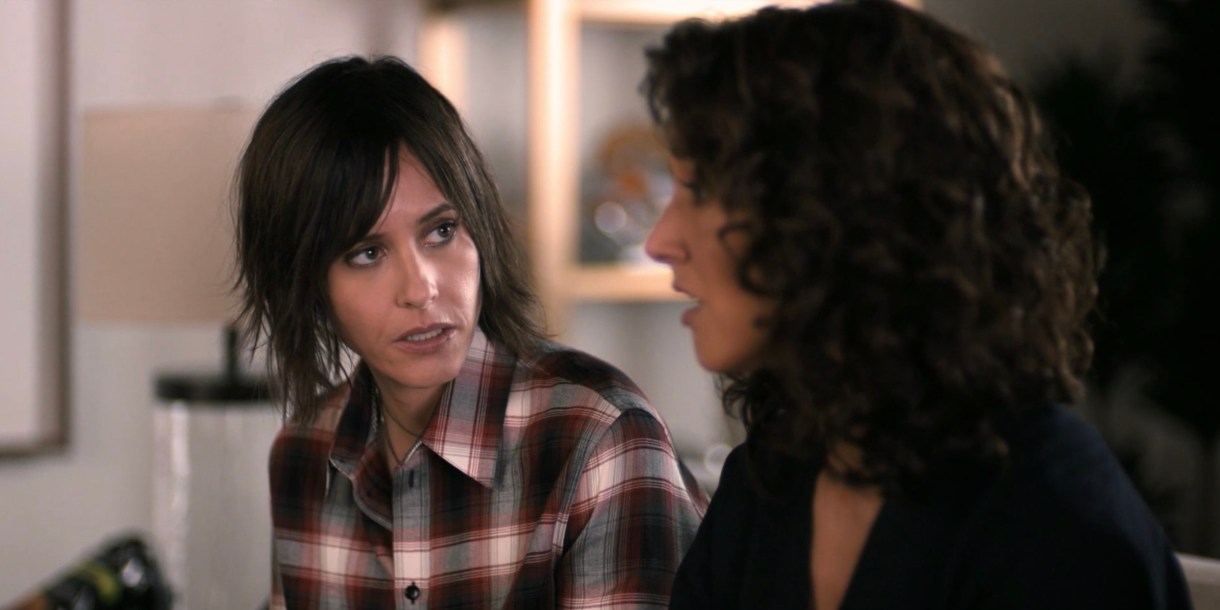 Listen. I have a driver in a white Ford Bronco right around the back of the house…

I can’t live in a stranger’s guest house or some motel and I’m not going back to Alice’s couch. I don’t think it’s fair that I’m being punished for something I didn’t do. So I’m gonna stay in the guest room until I find a place of my own!

Cut to Kit + Denny’s Lesbian Bar, where Tess and Finley are waking up half naked after the previous evening’s drunken romp. This is a pretty standard morning for our frisky friend Finley, but Tess is obviously shaken.

Are those the TomboyX 4.5′ inch trunks or the boy shorts?

It looks like my dog, Carol, texted her at 2:17 AM telling her not to take a drink. A little late with that text, Carol! 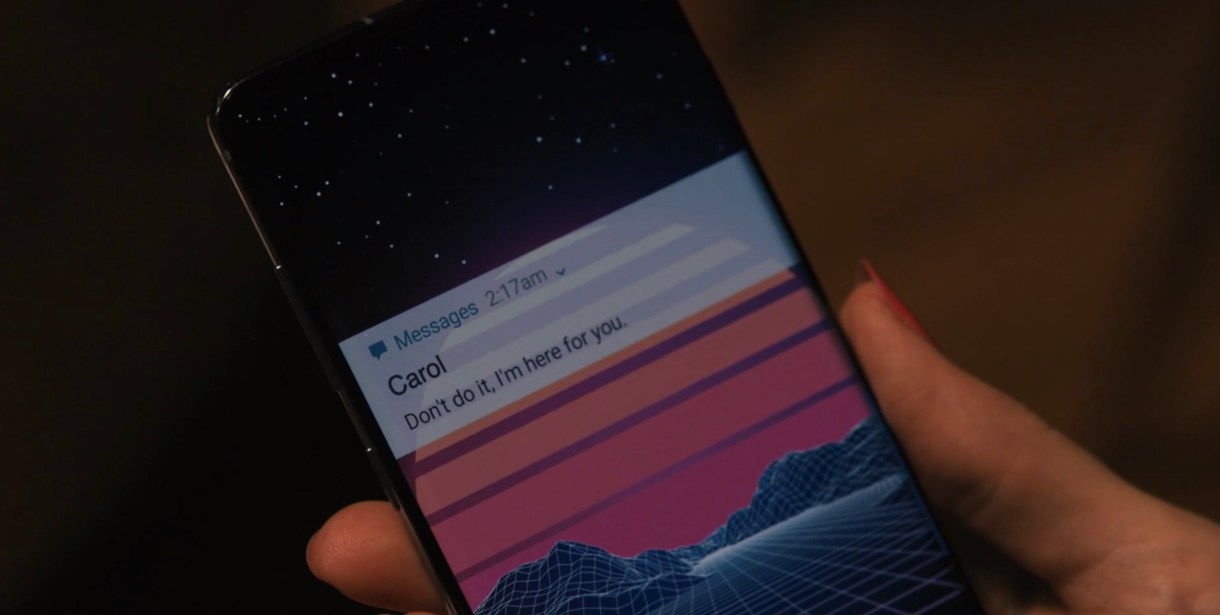 Shane shows up to find her roommate and her employee clearly reeling from the night before. “I thought you were sober?” she says to Tess. “I was,” says Tess. Shane says she could fire her, but won’t — Tess just needs to clean up and move on. Finley apologizes, Tess says it’s not her fault, and she’s gtg to a meeting, stat.

Back at Bette’s, Tina is wearing leather pants, which I believe is illegal, and talking on the telephone about the cut they’re sending to network, thus establishing that Tina’s still working in the film or television industry, thus furthering our already fraught suspension of disbelief regarding Tina not living in Los Angeles with her daughter! Mama T and Mama B talk about Angie’s play, and how Jordi makes Bette nervous. “Anyone who likes our daughter is gonna make us nervous,” Tina says. 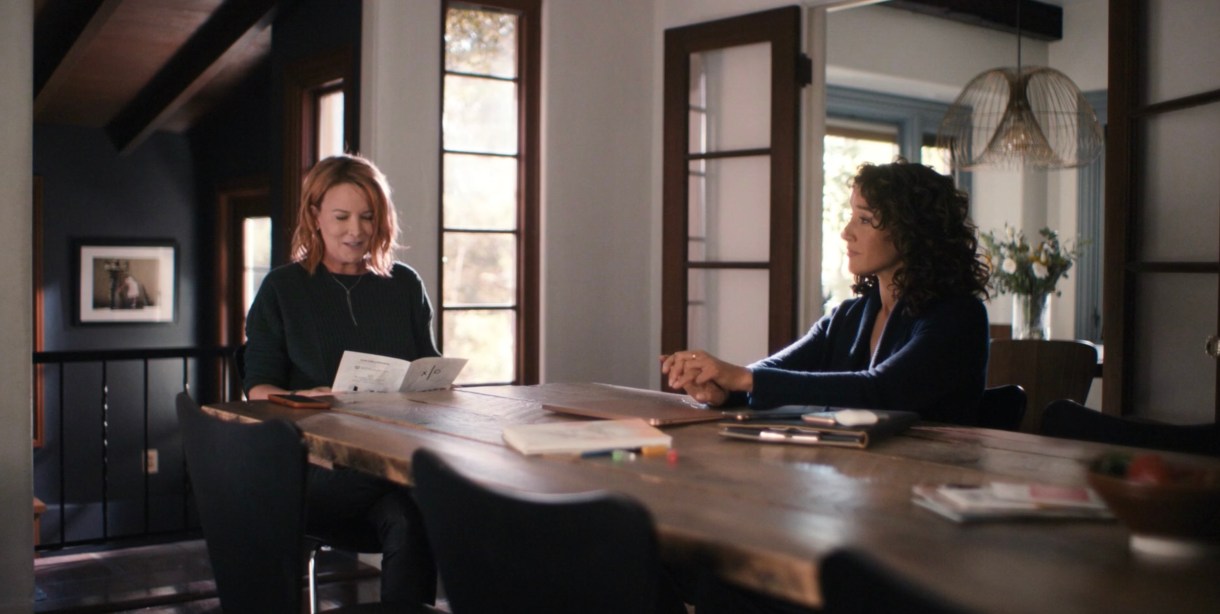 This zine is so good! Young queers are really out here giving such great advice, wow.

Bette asks if Tina thinks Jordi and Angie have had sex. “They haven’t even kissed yet,” Tina says, and Bette’s face almost gets offended that she didn’t already know this, but then mercifully for all of us, Bette decides to move on. “That’s one thing I did right, I guess,” Bette says, full of sorrow.  “You were doing a lot right,” Tina reassures her. 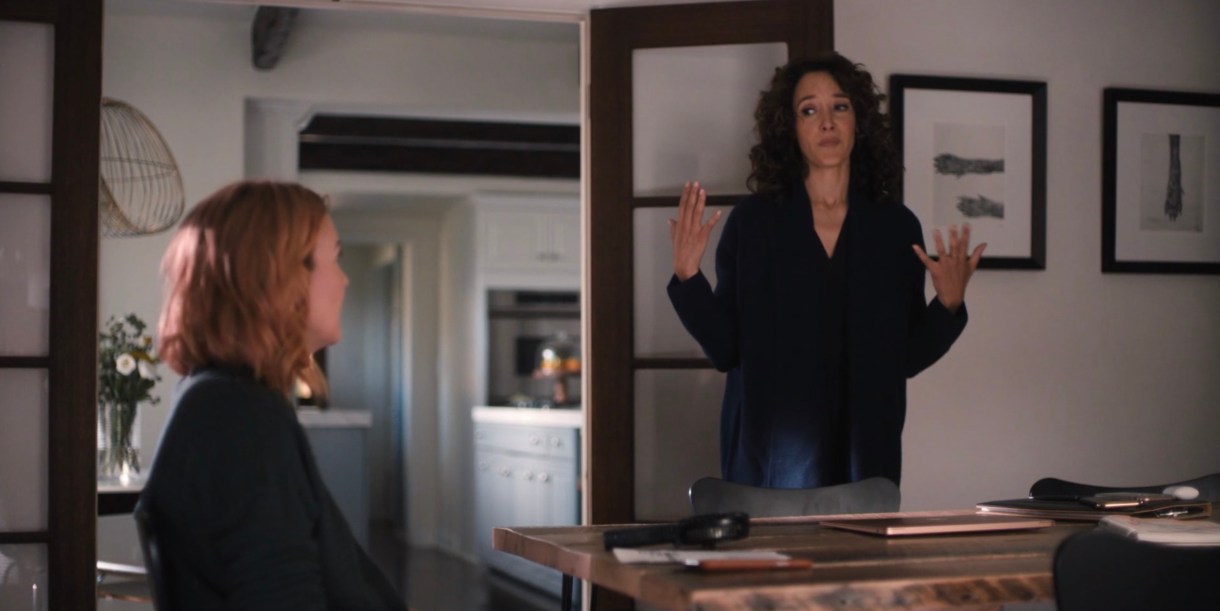 Bette recaps last night’s scuffle for Tina. I give this recap a demerit. Bette makes it sound like she’d pushed Mr. Felicity ’cause he’d pushed Angie, leaving out the part of the story where he directly attacked Bette after attacking Angie! Attacking Angie would’ve been cause enough, sure, but also, that’s not what happened. I know this because I rewound and watched it 10x out of concern for Bette Porter For Mayor 2020. What is happening. Bette doesn’t know what’s gonna happen now. Me neither because there’s no continuity. Tina gets a call — it’s very clearly her girlfriend, who’s upset Tina hadn’t yet called her, leaving Bette alone at the table with her abandonment issues.

Over at DaSoMi’s, Sophie’s removed all the sandwich ingredients from her refrigerator and spread them out before her, right where she can see ’em. She’s got your cheese, she’s got your lunchmeat, your lettuce, your tomato, your condiments. It’s a regular Jimmy John’s up in here.

THIS is the right portion of meat for a TINY sandwich for a TINY dog but you are a BIG dog and you are getting a BIG sandwich.

Sophie’s still simmering over Dani’s emotional withholding and that she fled the homestead at 4 AM and has not been in touch since.

Luckily Sophie has Finley, her best bro friend. “At least you talk to me,” Sophie says to Finley. Finley’s like of course I do! You’re the best! Speaking of talking, what happened last night, Fin-Fin? Finley’s gotta kill this sando and take a “nip dip” before she can get into the details of her previous evening’s romp. She’s real proud of herself for coming up with “nip dip.” “I’m a real Emily Dickerstein,” Finley says of herself, heading out into the morning sunshine.

The press remains camped out outside of Bette’s house, wondering if Bette and Tina are gonna get back together. Inside, Pierce and Dani are having a rough morning! He’s pissed Dani didn’t tell him Bette was back in the saddle riding Felicity’s pony. Also, Bette was supposed to be “better than that.” 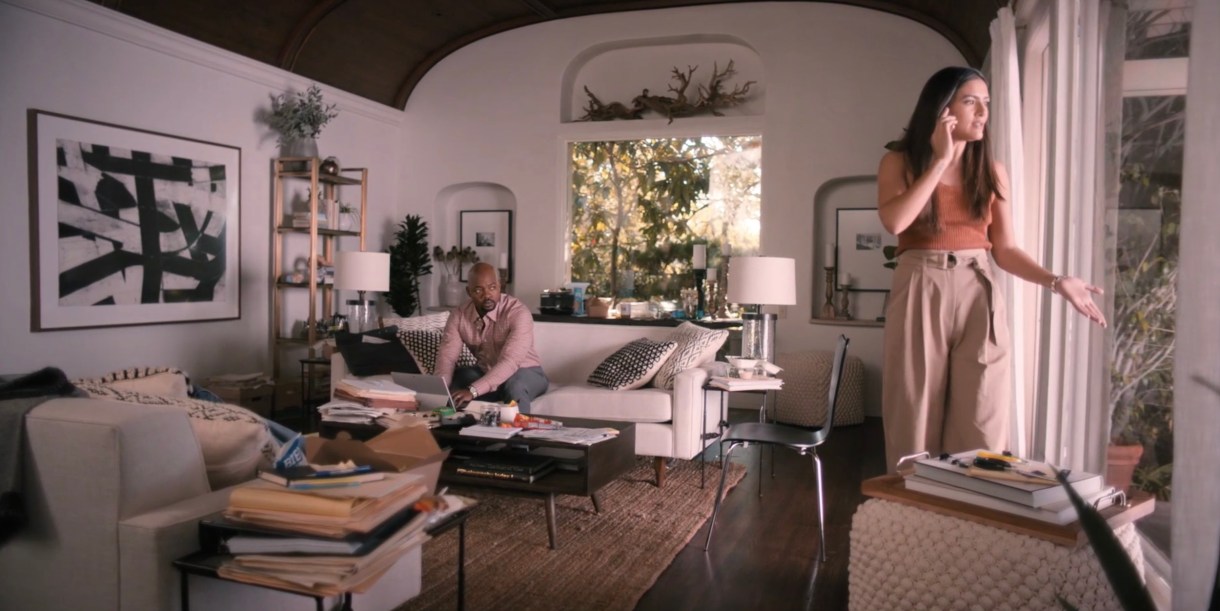 I’m looking outside right now and I don’t see anyone, are you sure you have the right address? We’re really hungry.

Pierce: “I’m a trans man and seeing someone like Bette Porter become mayor means that people like me might lead a better life. She was the one who was supposed to pave the way so that people like me could be in charge one day.”
Dani: “I understand that. But she could still win!”

Pierce isn’t sold on Bette’s electability but Dani remains rabid for her #1 gal Bette Porter.  Bette is special! She’s inspiring! Pierce is out here acting like he has not seen Jodi Lerner’s epic installation video art piece, “Core,” inspired by Bette Porter, which’s about core values. Much like she once inspired Jodi, Bette inspires Dani every day! Dani’s never felt this way about anybody before! Pierce seems to think there’s something else going on regarding Dani’s affection for Bette, but he’s not sticking around to see it. He’s taking the goldfish, bye!

Hey I have an idea!!!! Does anybody remember how Felicity’s husband was DRUNK and ABUSIVE and ASSAULTED A TEENAGE GIRL AND HER MOTHER? Idk, there MIGHT BE A WAY TO SPIN THIS. Like, perhaps Felicity is um, leaving her husband because he is TERRIBLE as captured on VIDEO and might have needed Bette’s emotional support to do so? I’m firing Dani and hiring myself.

Then, we all die together and end up circling the innermost ring of hell, the Los Angeles DMV. Shane’s very nervous that these assholes aren’t gonna pass Angie on her drivers test, despite her being a “freaking genius.” Listen I am also a genius, but also, one time I rolled down the windows of my car and yelled “BYE LOSERS” to my friends who were smoking outside and then drove my car straight into a rock. We establish that Quiara is famous ’cause a fan recognizes her. I seriously cannot believe that anybody walking out of that DMV could have as much enthusiasm for life as this woman.

Smile and say “License and Registration!!!”