Previously on Crisis on Infinite Earths, antimatter destroyed everything except the seven Paragons, who noped out to the Vanishing Point, and Oliver, who was hanging out in Purgatory (not the one in the Ghost River Triangle) with a being called Spectre. The last we left our heroes, Lex had changed the Book of Destiny to replace the real Paragon of Truth with the biggest liar of them all: himself.

Even though it feels like it has been ten thousand years since the last episode of the CRISIS, we start this episode ten thousand years ago, on Planet Maltus, where a younger, happier-looking Novu kisses his wife and tries out a temporal jump they’ve been sciencing. He ends up at the dawn of time, where he accidentally caused a breath to the anti-universe, where anti-matter is afoot and the Anti-Monitor is there.

At the Vanishing Point, it becomes clear by Ryan’s facial hair that they’ve been stuck there for months. I’m a little confused as to how he and the other humans are still alive, since obviously time is moving if he has a beard now, so his body is still doing things, but maybe there’s a Vanishing Garden somewhere. Then again Lex doesn’t have a longer beard so who knows what’s going on. He writes a letter to his dead wife, saying that things are looking bleak. The Paragon of Destiny doesn’t believe in tomorrow. The Paragon of Courage trains day in and day out for a battle that might never come. The Paragon of Honor meditates. A lot. And the Paragon of Hope seems to have lost hers.

He calls Lex a douche, which is a delight, and apparently the Paragon of Love has up and disappeared.

Eventually, Lex and Ryan work together to create a transporter of sorts, meaning they have a chance go get out of here. 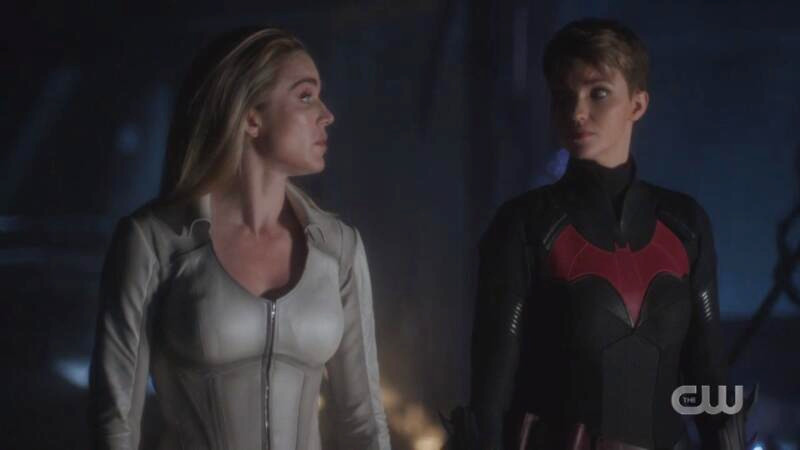 Kara flatly says that Lex should be the one to test it. It’s a perfect moment because sometimes even the most hopeful, the most positive, the kindest, can reach their limits with someone and no longer have the energy to even feign politeness. 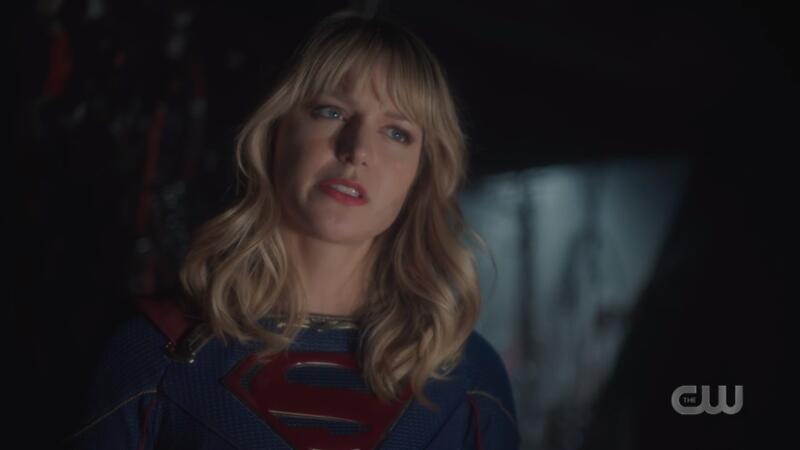 Even people with very long ropes reach the end of them sometimes.

Kara is determined to get the people they lost back, and just for a moment, that little flame of hope seems to spark behind her eyes.

The machine whirls and pops, but Lex unfortunately isn’t immediately replaced by his sister or anyone more useful than him. However, unrelated, The Flash barrels in, and when everyone demands to know where he’s been for months, he insists he’s been gone for like two minutes. But time means nothing anyway, because he can’t access the Speed Force, which means he can’t undo this. There’s no way out.

Over on the post-death version of Lian-Yu, Spectre is giving Oliver all of his powers and showing him how his life lead up to this moment. He tells SpectrOliver that it’s almost time for the ultimate fight, and that it’s time to find his friends. Which is something it has taken Oliver 900 episodes to realize, and honestly I think he still needs it told to him: he needs help, and it’s okay to ask for it, and accept it.

Back at the Vanishing Point, Barry is zooming around, angry, Kara and Sara holding him back, knowing they can stop him by force if they have to. 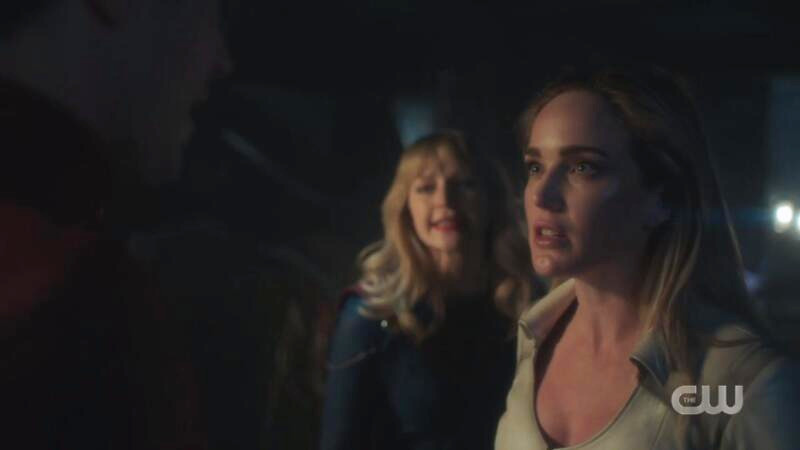 “Cut it out! You will not ruin our shot at getting out of this Vaseline-smeared world!”

But Oliver shows up and tells them that the Speed Force is the key and that the Paragons have to use it to stop the Anti-Monitor. 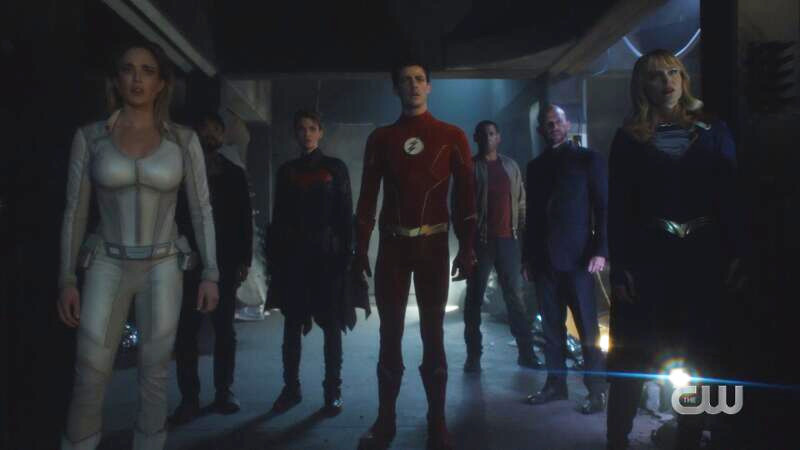 Just a warning: this Arrow hour of the Crisis is almost as dark as when Once Upon a Time went to Neverland, and under a worse filter than the whole of Ravenswood.

They’re surprised to see him but he explains that he’s not quite Oliver. He says he’s something… more. Which is what he’s been saying he needs to become in his intro for quite some time now, so I suppose this was always going to happen. He says they have to go to the dawn of time to fight, and gives them their mission. He sends Kara, Ryan, and Lex to Maltus to try to stop the Monitor from making the breach in the first place, and boops Barry to give him (and thus, the rest of the team) access to the Speed Force again.

Barry Flashes into the Speed Force but finds himself knocked off course and face to face with a version of Oliver who is at Queen Consolidated. Oliver explains that the Anti-Monitor attacked and scattered his friends throughout the Speed Force, and that he’s going to have to go back through important moments in the Arrowverse timeline to find them.

On his way, Barry runs into another Barry Allen… and it’s the Barry Allen from the Justice League movie. Which, after the wee bit of controversy that surrounded the DC Universe when it was clear they weren’t doing a Marvel and using the same characters in their movies as their TV shows, was pretty delightful. (Also implies the existence of Gal Gadot’s Wonder Woman, just saying.)

Up (over?) on Maltus, Lex fucks off almost as soon as he lands on Earth, much to Kara’s chagrin. Kara finds him and fights with him; he’s so convinced that brain will beat brawn, but what he doesn’t realize is that she’s not brawn at all. She’s heart. 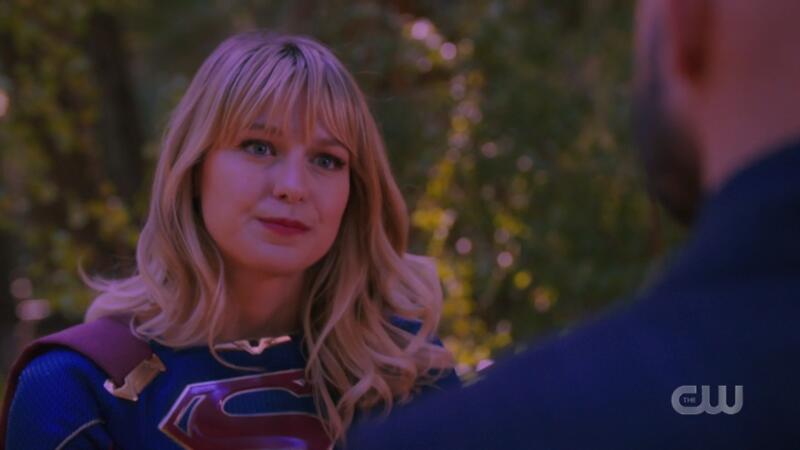 “You, not unlike some of the writers on this show, are severely underestimating how much I love Lena Luthor.”

He goads her into asking what he wants and he goes full Pinky and the Brain and says that he wants to take over the universe. Oh, also? When he was fiddling with the Book of Destiny, he gave himself powers. Even though part of his whole deal is that he hates that some people are naturally more powerful than others but whatever.

Lex ends up using these powers to knock Kara and Ryan out and in case you forgot he’s a sociopath, he whistles while he walks away from their unconscious bodies.

Ryan wakes up first, I would assume because Kara needed to RELAX and the only way she was able to do so was to be knocked clean out, but as soon as he wakes her and she scans him for permanent damage, they’re off. Ryan doesn’t feel much like a Paragon (even though he somehow survived a blast strong enough to knock out a Kryptonian), but Kara reassures him that the fact that he’s even there, willing to help, means he’s special. 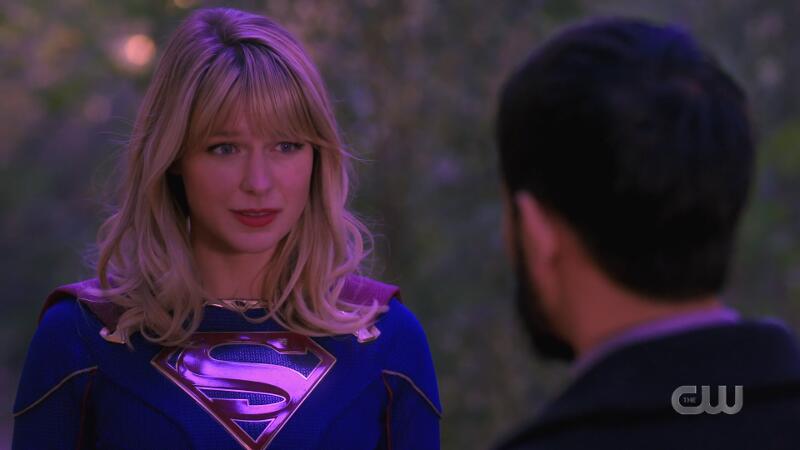 New life goal: for Melissa Benoist to look me in the eye and tell me I’m special.

He calls her the Paragon of Pep Talks and calls Lex a “selfish asshat” and frankly I like him and wouldn’t hate it if he stuck around post-Crisis. On any of the shows. Kara agrees and then tells him to get ready to fly. 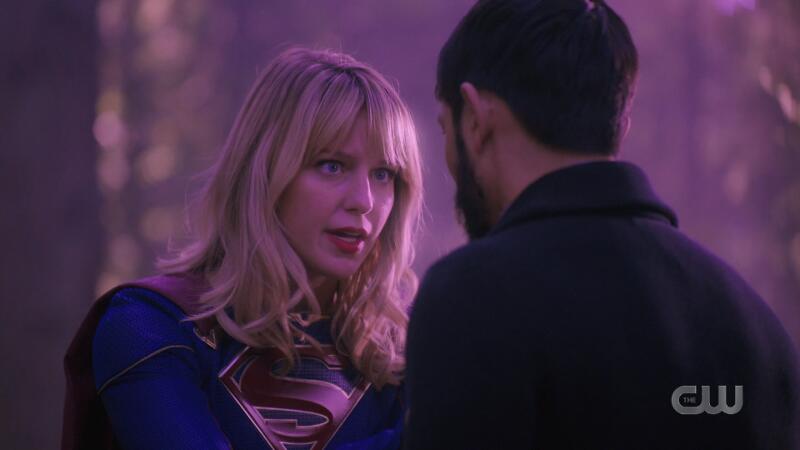 THIS IS WHAT DREAMS ARE MADE OF

Say what you want about this Monitor/Anti-Monitor stuff (What I’ll say is: it’s boring and I don’t care about it) but moments like this are what my nerdy, cheese-loving heart LIVES FOR.

Meanwhile, Barry is zip-zapping around the Speed Force and starts collecting friends from different points in Arrow. He eventually finds Oliver in last year’s crossover memories, and Oliver tells him about the deal he made to save Kara and Barry. He tells them that dying is easy, dying is peace, but it’s the people who have to keep going, keep fighting, who are the real heroes. In other words, “The hardest thing in this world is to live in it.”

Barry ends up back at one of the times Sara died, dressed as the Black Canary, Laurel and Diggle standing over her. Barry zaps Sara awake and doesn’t even let the sisters, whose current experience is that the other is dead, hug for ONE SECOND before whooshing her away again. 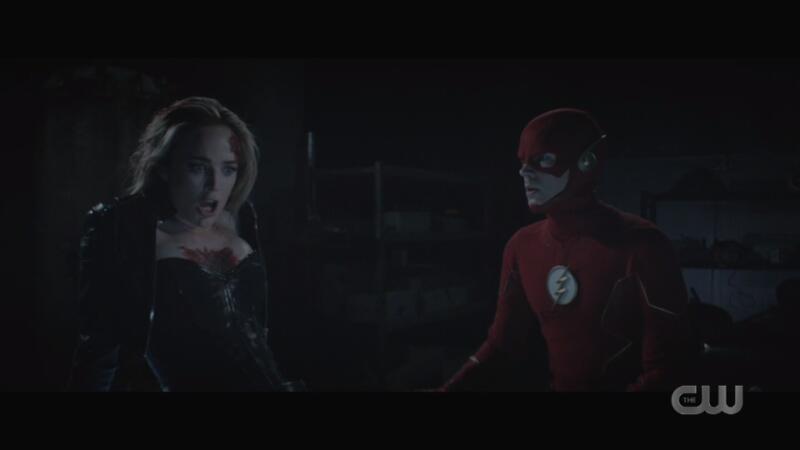 Sara is on a one-woman mission to come back to life enough times to make up for all the TV gays killed in 2016.

On Maltus, Lex goes to find the Monitor and tries to offer him knowledge of the future in exchange for abilities he will come to possess. But as he’s explaining the Crisis to Novu, Kara shows up to spoil his fun.

While those two fight, Ryan talks to Novu and talks him down from doing this thing that will surely destroy the universe. His calm and reasonable nature sways Novu, who calls him remarkable.

Meanwhile, Kara is telling Lex all the things he’s done to piss her off, but the thing she says the loudest and the angriest is, “You betrayed Lena.” 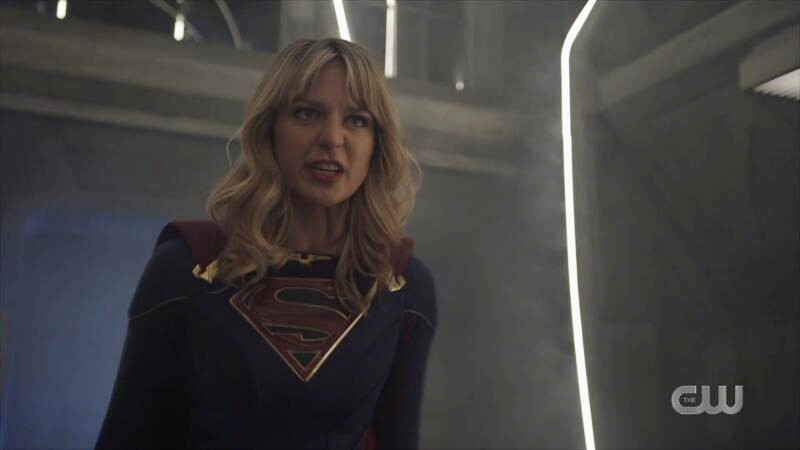 But before their fight can go too far, The Flash Train comes to pick them up and takes them to meet up with the rest of the Paragons at the dawn of time, in the anti-matter universe. 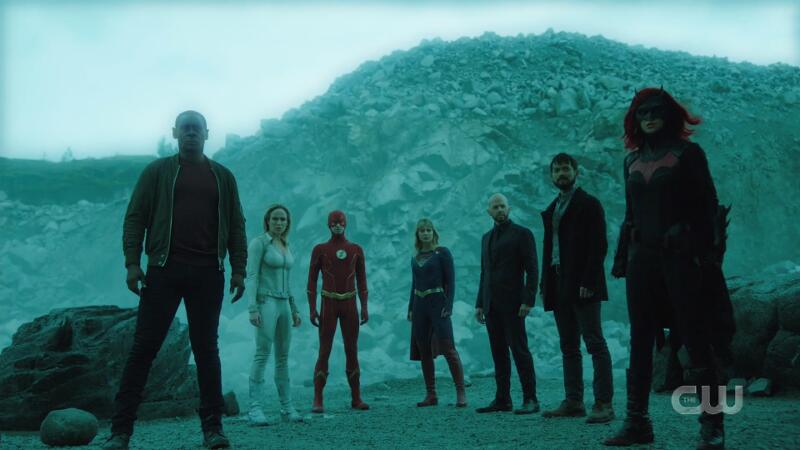 Remember when the WB used to have all its actors hang out on a couch for promo spots? Same vibes.

The Anti-Monitor chuckles at their attempt to stop him, because even though they stopped this Monitor, one will still come. So instead, at SpectrOliver’s command, they fight. 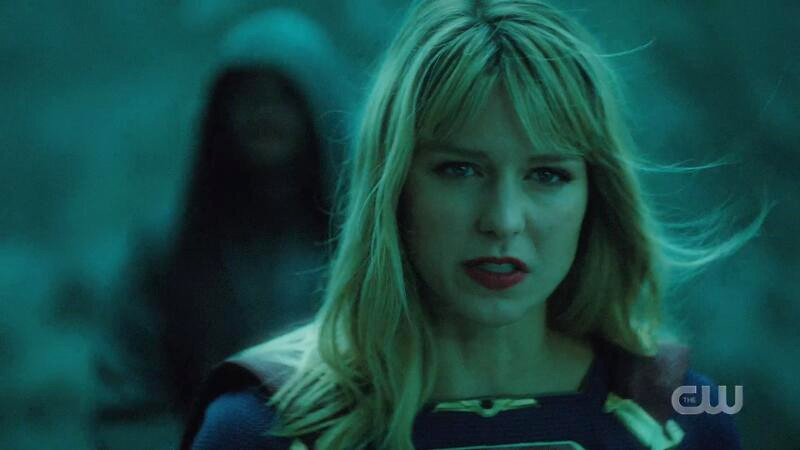 So the heroes all join forces; even Lex, because he values his own life above all else. While the Paragons take on the shadow demons, Oliver takes on the Anti-Monitor, blasting all the dementors away with one beam and his catchphrase (but Crisisified): You have failed this universe.

Realizing Oliver still needs their help, Kara tells them to all focus on their Paragon qualities and Care Bear stare at the Anti-Monitor. 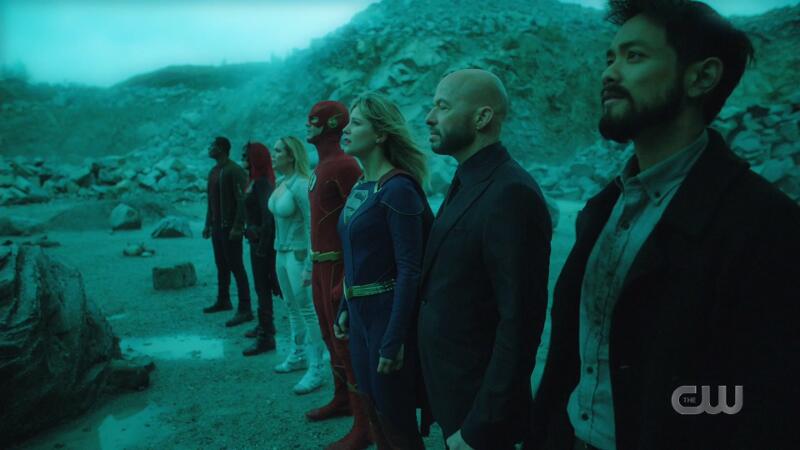 I can’t wait to see a photoshopped version of this with lil light beams coming out of their tummies.

Oliver tells them to look up, and through their tears they see a new universe forming. An end and a beginning. 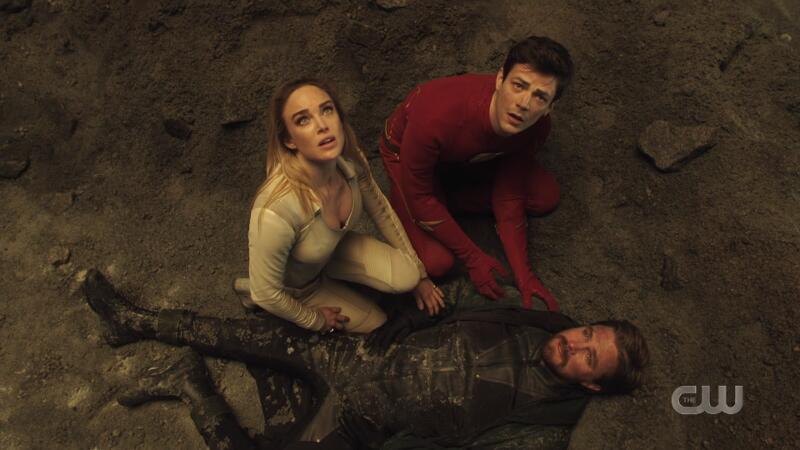 “I swear to god, Barry, if you start singing Closing Time, I WILL break your legs.”

And thus ends Part 4 of the Crisis on Infinite Earths, the Arrow Hour, the Darkest Timeline.

Valerie has written 376 articles for us.