No matter how you try to avoid it, life is filled with moments of regret. Moments that you wish you could get back and do over.

For Malika, that moment started during Good Trouble‘s midseason finale. Eschewing the “meet the family” dinner plans she had with her boyfriend, Malika participates in a disruption with her fellow Black Lives Matter activists. She doesn’t know until her camera starts filming that the target of the disruption is Judge Curtis Wilson, the judge that presided over the Jamal Thompson case and even then, she persists. She keeps filming as she recalls that Wilson, though not charging her for storming into his chambers, filed a restraining order against her. She keeps filming as the police arrive and Wilson’s clerk, Ben, urges her to leave. She films until the police detain her fellow activists, only stopping when an officer takes her phone away. 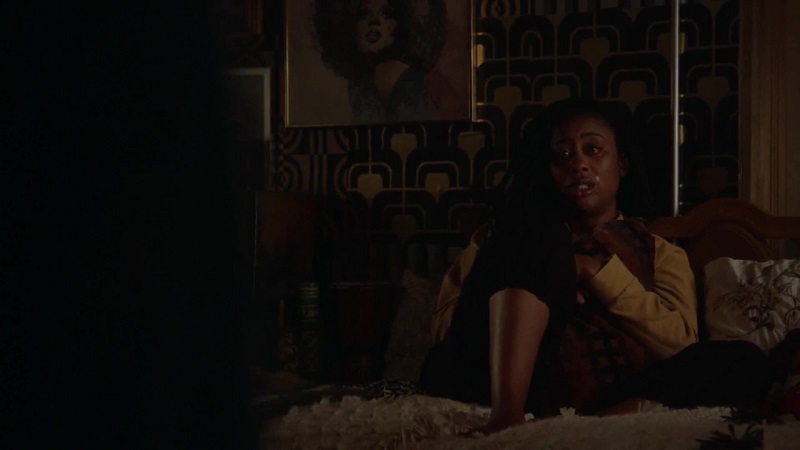 Only later does Malika get that moment of regret, spurned by the realization that violating the restraining order could earn her a year in jail and that, by prioritizing her activism over him, Isaac’s starting to second-guess their relationship. She tries to cope with all the turmoil by getting drunk with Dennis… and Davia mistakes their drunken night together as something more than what it is.

With her friend facing the prospect of jail, Callie tries to intercede with her old boss. Unsurprisingly, Judge Wilson is not having it. He doesn’t believe that Malika didn’t know he was the target of the protest. After having been lenient towards Malika before, he’s reluctant to go easy on her again and he chastises Callie for even asking him. But, as he walks away from a frustrated Callie, Judge Wilson gets a call from the local police: his son, Tate, has been found dead from a drug overdose. Stunned by the news, Wilson nearly collapses to the ground — clinging to the rail to hold himself up — and Callie rushes to his side to check on him.

Understandably overcome by grief, Callie volunteers to accompany her former boss to his son’s apartment to identify his body and talk to the police. Wilson goes through the motions, almost on autopilot, consumed by his grief and his memory of the moment he’ll never get back with his son… their last moment together: an angry fight between father and son. After rejecting his son’s request to pay his rent for another month, Wilson urged his son to go back to school or get a job so that he could “be somebody.” But Tate, who at that point was sober, refused to conform to his father’s expectations.

Judge Wilson: Well, there are worse things than being like me.

Tate: Are you kidding me? I’m ashamed to tell people that my father is a judge who lets cops get away with shooting people.

Judge Wilson: Yeah? Well, back at you. You think that I’m proud to tell people about my son the addict who dropped out of college and wrapped his car around a tree? You want to talk about being ashamed of someone?

It’s a moment that’s going to haunt Wilson forever… one he can’t get back… but because the grief is still new, he tries to assuage it by fixating on who sold Tate the drugs. When he pauses, he realizes that he still has to tell his wife about their son’s death and Callie volunteers to drive him. He declines her offer, thanking her for being there, and leaves Callie to finally express her own feelings about everything she’s seen… which leads to a panic attack outside the apartment building. 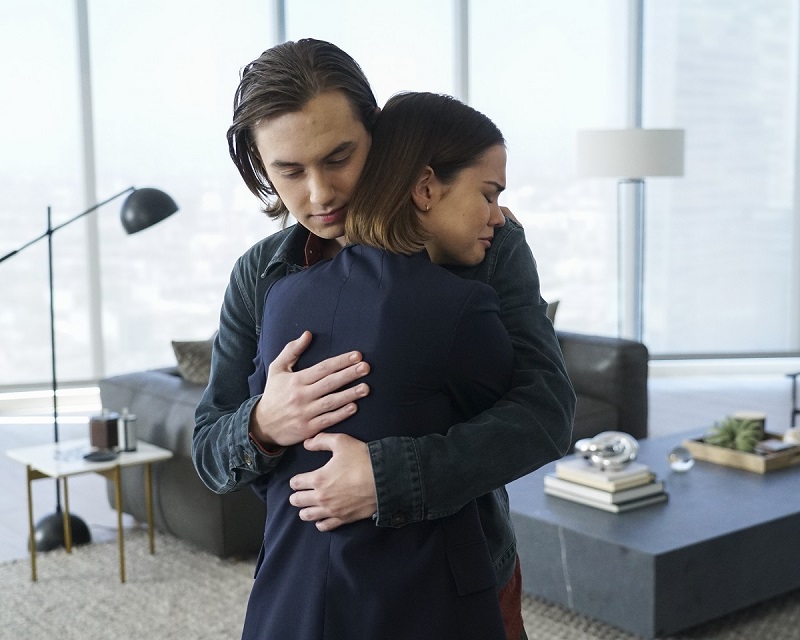 Though Callie’s first instinct is to reach out to Mariana — a nice callback to the show’s first episode — she doesn’t; instead, she answers Jamie’s call when it comes and, after having bottled up her emotions for Judge Wilson’s benefit, Callie’s own heartbreak spills out. Knowing that he’s not what Callie needs right now, Jamie calls in reinforcements: her brother, Jude (Yay, Judicorn!). Tate’s untimely death has sparked memories of Callie and Jude’s mother’s death… and, like Judge Wilson, all Callie can recall is the last time she saw her mother. Young Callie was angry at her mom for leaving her to go out and wouldn’t let her mother kiss her goodbye, a story we saw told in the first season of The Fosters. She never saw her mother again after that and she’s carried regret with her every day since.

“Loss is hard enough but it’s the shock… like when it happens suddenly… it stays with you forever, I think,” Callie admits.

Callie doesn’t want to know this feeling again so she begs Jude to avoid the path that Tate went down. She reminds her brother that you can’t trust the quality of drugs and it only takes a small bit of a fenatyl-laced drug to kill someone. She sounds irrational, especially since Jude’s never shown the propensity for drug use, but Jude accepts it as part of her grief. He swears he’ll never use drugs, perhaps because he won’t but mostly because, in that moment, it’s what his sister so desperately needs to hear.

Once Jamie excuses himself to go to bed, Jude asks about what happened between Callie and Mariana. As is her wont, Callie’s scant on details: she says she needed some space. Jude is skeptical (oh, Jude, you always were so wise!) but Callie assures him that this is just part of being an adult. Her brother scoffs — “so this is you, adulting?” he asks mockily — and, as if to confirm his skepticism, Callie invites Jude to have a sleepover.

By the time the morning comes, Jude’s gone and Callie’s grief has receded in that way that it must to to make living with it manageable. She thanks Jamie for knowing exactly what she needed before she could even verbalize it. She confesses that she loves him and, maybe, their new living situation — initially intended to be just a stopgap until Callie passed the bar and got her own place — ought to be permanent.

For everything I’ve loved about this show (and I really do love it), one thing that’s consistently frustrated me is Callie. Her character is often siloed on Good Trouble, whether at work or with Gael or Jamie, and we haven’t had much opportunity to see her be integrated into life at the Coterie (which I worry will be an even bigger problem now that she’s moved out). That said, the Callie featured in “Clapback” feels as close to the Callie we’ve known for years… the way she’s there to support Malika and Judge Wilson, at the expense of her own professional life. This version of Callie makes sense to me, the version of Callie that was so boy crazed that she failed the bar, doesn’t. I hope we get to see more of this version of Callie in the second half of this season.

+ Mariana’s struggling with a potential moment of regret herself as she wonders if leaking Speckulate’s salary information was the right thing to do, particularly as the company’s new Chief Operating Officer threatens to fire whoever was responsible. Sadly, Mariana doesn’t feel she can go to Callie with her problem.

+ Davia’s also struggling with regrets as news finally gets back to Jeff’s wife about Davia and Jeff’s affair. But while Davia’s rightly regretful about the affair, she refuses to let Jeff’s wife’s insults about her weight bring her down. She taps Gael to help her respond to the taunts with a clapback video where she owns being a “fat bitch.”

+ Also? Good Trouble continues its trend of performances set to my favorite songs with this performance from Davia, set to Lizzo’s “Soulmate.”

+ Which Coterie resident isn’t living with any regret (at the moment)? Alice, who kills her first stand-up gig, and accepts an invite from Lindsay Brady to open up for them in Sacramento. But with things still tense between Lindsay and Joey and Sumi taking a romantic interest in Alice’s comedy mentor, I can’t imagine that lack of regret lasting too long.

Reminder: Good Trouble is now on at a new day and time, Wednesdays at 10PM.