In the first episode of Good Trouble, Callie’s sitting at her desk, just a few days into her job as a federal court clerk when her phone rings. Callie shouldn’t answer it; she’s just been given the most important assignment of her young career: a bench memo for a high profile police brutality case that’s unexpectedly landed on Judge Wilson’s desk. The case’s first hearing will be a motion to dismiss so Wilson invites his three clerks to submit dueling bench memos for the opportunity to clerk the case. It’s everything Callie had come to Los Angeles for — an opportunity to persuade her conservative judge of a more progressive vision — and she should be focusing solely on it. 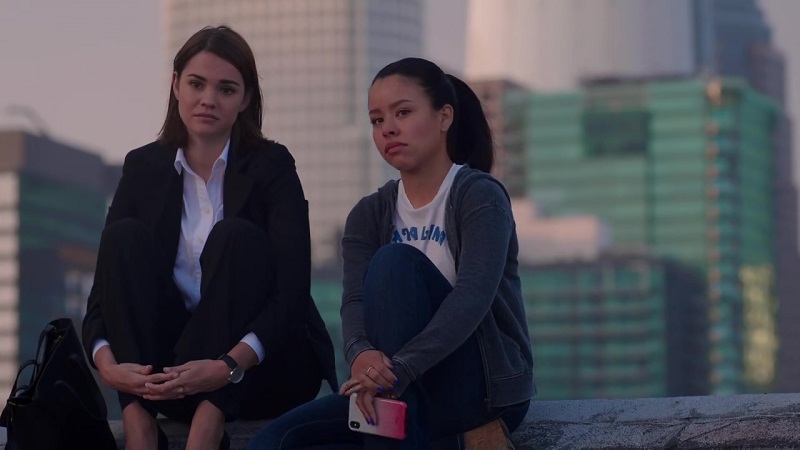 This week, though, things are different.

A few weeks into her stint as a researcher assistant at Legal Aid, Callie unearths a potential class action suit against a local development company. Over Teresa’s objections, Marcus takes the suit and runs with it, offering Callie the opportunity to be his right hand through the process. It’s an opportunity to finally do something more substantive — something Callie’s been longing for — and a chance for Callie to impress a lawyer from the ACLU, who’s joining the lawsuit as a partner. On top of that, she’s got stack of busy work from an angry Teresa and the California bar to retake. But then her phone buzzes with a text message from Mariana.

This time, instead of running off to help her sister, Callie stews in the pain of the last few weeks…. of Mariana’s constant reminders about paying the bulk of the rent… of Mariana slagging her off in chat conversations with Davia, Alice and Malika… of Mariana taking Gael’s side in a fight over the art piece that Jamie bought — and she ignores her sister’s message. But it doesn’t stop there: when Mariana rushes home to talk to Callie — she really does need Callie’s help — her sister’s stuff is gone and all that’s left is a note. As someone who started watching Good Trouble primarily because I wanted to see these two characters that I’d watched over five seasons of The Fosters continue to grow, the moment seemed particularly bleak.

“We are Adams Fosters. We don’t give up. We don’t give in. We fight,” Callie tells Mariana in that first episode. At the time, those words were a rallying cry but now, directed at one another, they seem ominous.

There’s always going to be a small part of me that responds to situations like this with “SOMEONE GET STEF AND LENA TO FIX THIS” — but this schism between Callie and Mariana feels like it needed to happen. Good Trouble definitively stepping out of the shadow of The Fosters. The mamas aren’t coming to save us; this show and these characters need to stand on their own two feet. This is the hard, un-glamorous, often solitary, work of becoming an adult and Good Trouble showcases that better than most shows on television. 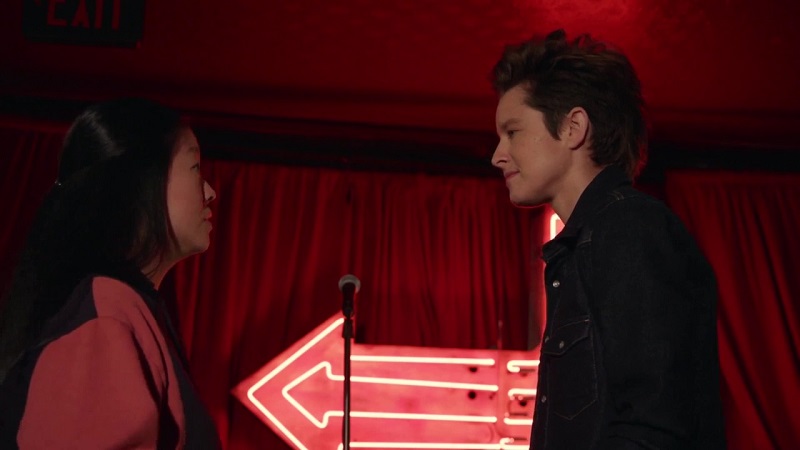 Also engaged in that work this week? Alice, who takes a big step towards establishing herself as a comic, when she lands her first ever slot in a comedy show. She’s been working with her comedy hero, Lindsay Brady (guest star, Rhea Butcher), to perfect her “tight five” and they think Alice is ready to take the stage. Lindsay claims to be helping Alice because she wants to mentor other queer comics but the moment Alice’s back is turned, it’s clear Lindsay has some ulterior motive. Joey’s been trying to warn Alice about Lindsay and, though it seemed a little paranoid at the time, Lindsay’s actions this week prove Joey very, very right. After Alice secures her slot, she heads back to the Coterie, leaving Lindsay alone with the club’s booker. It’s clear from their conversation that Lindsay’s interested in Alice because she’s Joey’s girlfriend, a fact that Alice had never mentioned to them before.

The night of her set, Alice shows up to the club early and she’s a bundle of nerves. Lindsay hands her a beer, tells her to take a sip and store the cap in her back pocket for luck. Alice follows them backstage, anxious for more pointers on what real comics do, but, instead, Lindsay kisses her. Alice doesn’t kiss back and, when Lindsay pulls back, she makes it clear that’s not what she had in mind when she asked about their pre-set routine.

“I was expecting you to say, I rub my belly or I listen to Beyonce or something, but you’re just out here kissing,” Alice says in disbelief.

Lindsay apologizes and, as she is wont to do, Alice quickly forgives them. Alice explains that she has a partner and Lindsay admits that they already knew. Lindsay feigns disappointment: they can’t believe they’ve done to Joey what Joey once did to them. Asked to clarify, Lindsay explains that Joey had an affair with their girlfriend and, ultimately, broke them up. That’s not exactly how Joey explained the situation a few weeks ago so Alice is left not knowing who or what to believe? But, me personally, I’m going to believe the person who’s not trying to kiss other people’s girlfriends without their consent… that might be just me, though.

So let’s review: it’s Alice first professional comedy set. She’s just been kissed by her comedy hero. She’s just been told by the aforementioned hero that her partner had an affair in a previous relationship which her partner lied about just a few weeks prior. And if that wasn’t enough pressure on Alice’s shoulders, her potentially lying partner — who she’d explicitly asked not to come — shows up with flowers in hand and sits right up front! Is it any wonder that the first half of season two ends with Alice standing on stage looking like a deer caught in headlights? 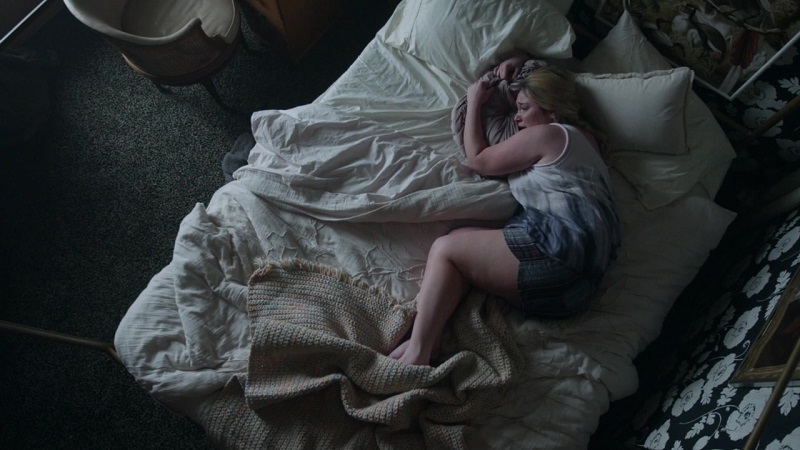 Adulting is going almost as well for Davia as it is for Alice… that is, not well. She’s finally ready to tell Dennis about her feelings for him but, before she can, he tells her that he and his wife, Jennifer, are trying to make another go of it. Davia pretends like she’s happy for him but inside, her heart is breaking. She rushes out of his loft before he can see her tears fall. Later, when Davia goes over to Dennis’ loft to return his sweatshirt, she runs into Jennifer and congratulates her on reuniting with Dennis. Jennifer corrects Davia: she and Dennis aren’t getting back together, they’re actually finalizing their divorce. Stunned by Dennis’ lie, Davia retreats to her loft and the insecurities she’s been holding at bay flood back in. Dennis’ rejection makes everything her mother said real.

“He’ll never love you because you’re fat,” echoes in Davia’s head as she cries into her pillow.

But Davia’s weight has never been the issue for Dennis, it’s his own feelings of inadequacy that keep him from giving into his feelings. He loved his son and he loved his wife… and he believes, deep down in his heart that he failed them both so spectacularly that he can’t invest in loving anyone again. Jennifer’s moved on — with the divorce papers signed, she’s free to marry Dennis’ former best friend, Nathan, and prepare for the birth of their child — but Dennis just can’t…not yet. He lied to Davia about reuniting with Jennifer because he’s worried that she can see his inadequacy too; it’s the reason she lied about breaking up with Jeff, it’s the reason that she thinks of him as her “best friend.” He’s not good enough and Davia knows it and so Dennis lets go of his refuge from the pain and allows himself to be swallowed by his grief once again. 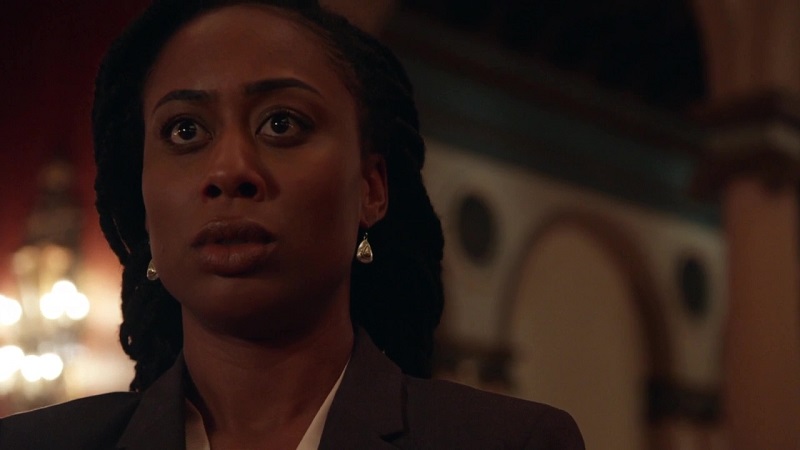 But the Good Trouble midseason finale saves its most harrowing ending for Malika.

The disruption planned by the Los Angeles Black Lives Matter chapter is, slowly, coming into view. The leaders of the group — real life BLM activists, Patrisse Cullors and Melina Abdullah — dole out information selectively, an attempt to thwart infiltration by the police, through secure texts and short meetings. The disruption they have planned is a low-risk action — that is, not likely to result in arrest — but they invite Malika to livestream the action from their BLM accounts. She agrees and awaits confirmation of the time and location of the disruption.

Once she gets the information, via secure text, Malika makes her way into the Southern California Association of Trial Lawyers dinner as Michelle Green. Later, she gets another text, alerting her that the protest is imminent — Malika still doesn’t know who’s being targeted — and she goes live on social media. As the disrupters make their way to the stage, the target of the protest is revealed: it’s Judge Curtis Wilson, the judge that presided over the Jamal Thompson case. Malika keeps filming but it’s clear that she’s taken aback.

While the other activists might be strangers to Wilson, Malika is not; she stormed his office after the verdict in the Thompson case and only escaped charges thanks to the grace of Wilson’s secretary. I cannot imagine that Wilson, whose nomination to the US Court of Appeals is announced at the dinner, will be quite as amenable this time.

+ Kendra Zahir joins the team at Speckulate as the new chief operating officer and, almost immediately, sets about changing the culture. She fires the head of HR for overlooking sexual harassment allegations, promises to address the racial and gender pay gaps and find the person who leaked Speckulate’s salary information to the press. It’s a curious threat from the new COO, one that (seemingly) runs counter to California’s expansive whistleblower protection laws…but I suppose that’s a question for your would-be lawyer sister if she only answered her damn phone.

+ One of the hallmarks of Good Trouble has been the use of a non-linear storytelling that mimics the human memory…and while I’ve grown accustomed to it, for the most part, I found its use this week — its overuse, if I’m being honest — really distracting, particularly when it came to Alice’s storyline.

+ Freeform finally posted Malika, Yari and Tolu’s performance of “Dear Black Girl” from “Twenty-Fine” online, just in case you want to watch it over and over again like me.

That’s a wrap on the first half of Good Trouble‘s second season. While we don’t know yet when Good Trouble will return, we do know one thing for sure: we’re heading back to the Coterie for the holidays!

Natalie has written 201 articles for us.