“When Alice brought me into the Coterie, she literally carved out a piece of her loft to give me a roof over my head,” Malika says, as she kicks off the festivities at her 25th birthday celebration. “But she and all of you, gave me so much more than that, you gave me my first real home…my chosen family.”

Over 19 episodes, Good Trouble has proven itself to be a very good show, willing to address issues of race, gender and sexuality in a manner unlike any other show on television. That said, the show is the best version of itself when pulls back from the individual stories and focuses on the collective one. Focusing on the chosen family that’s been built at the Coterie allows the show to be serious, sincere, sexy and fun, all at once…and always results in some of Good Trouble‘s best episodes (see also: last season’s Re-Birthday and Broken Arted).

Perhaps because of the losses she’s experienced over the last 12 months — her mother’s death and the outcome of the Jamal Thompson case, most notably — Malika’s stepping into her 25th year of life with a renewed sense of self and a genuine appreciation for the life she’s living. She invites Isaac, her brother, her best friends and her closest friends at the Coterie to a “low-key” party. Because, apparently, no one does your standard birthday celebration at the Coterie — remember Davia’s scavenger hunt/trivia game? — Malika invites her friends to share their talents, instead of sharing gifts. She offers each Coterie member a word or phrase to inspire their creative expression that they’ll perform for the group.

But Malika’s not someone to ask someone to put themselves out there without being willing to do it herself, so for the night’s first performance, she and her friends, Yari and Tolu, take center stage. They perform a choreographed routine to Yari’s spoken word piece called “Dear Black Girl,” written by Yari’s portrayer, Candace Nicholas-Lippman, that was so stunningly amazing that I still picking my jaw up off the floor after having watched. The astounding performance was bolstered by the direction…which not only captured the rhythmic movements of the girls on stage but the disbelief of the audience, who’s stunned faces all mirrored my own.

“When society tries to pin light versus dark skin, we remind them that every shade of chocolate is divinely crafted. Black girl magic is more than a hashtag…it is a movement,” Yari pronounces. 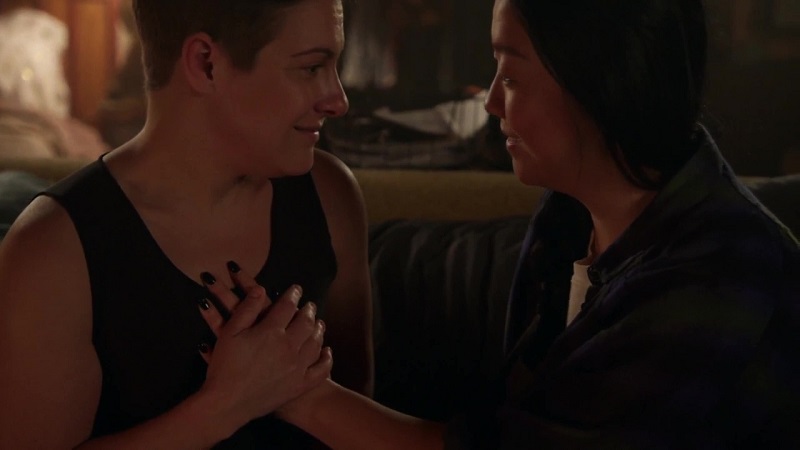 Appearance may be different but the heart’s still the same.

Malika invites Alice to “surprise [her]” and that leaves Alice stumped about what to do. As she laments that other people find her to be unsurprising, Davia reminds Alice that she couldn’t even surprise her parents when she came out to them. But the one person Alice continues to surprise? Joey…and not in a good way. When Joey pauses a makeout session with Alice to reveal that they’ve begun binding their chest, Alice is surprised asks a handful of questions about it, including if she’d made Joey feel uncomfortable previously. Joey explains that they weren’t comfortable with their chest and binding makes them feel confident and sexy. The moment passes quickly and, perhaps, gets lost in an episode full of theatric performances but there’s something profound about seeing a discussion about binding on television. It rarely happens — I can’t recall another time, honestly — but it’s part of the lived experience of so many gender non-conforming people that I’m thrilled to see that story represented on Good Trouble.

Joey leans back into a kiss but pauses to ask Alice what makes her feel sexy. She surprises Joey by laughing and making a joke…ruining the mood and making Joey feel like Alice is making fun of them. Frustrated, Alice apologizes for not knowing exactly what to say and storms out. But later at Malika’s party, Alice surprises everyone with her performance to Juliet Roberts’ “Bang Bang Boom”. Barely recognizable, Alice struts through the Coterie in makeup high heels, fishnet stockings, and a black romper, whipping her long ponytail back and forth throughout her sexy performance. With everyone else whooping and hollering around them, Joey watches the entire routine in stunned silence, their mouth agape at the sight of their girlfriend.

Once they’re back in her loft, Alice asks Joey what she thought and they admit they thought it was hot. Joey leans in for a kiss but this time, Alice stops it, wondering if this — this more femmed version of her — is what Joey really wants. But Joey assures her that it wasn’t the feminine presentation that made the performance so hot, it was that Alice’s confidence they were attracted to. For once, Alice wasn’t telling jokes about herself and her sexuality. Joey applauds Alice for taking her space and owning it and showing some vulnerability in the middle of it all. They both commit to working on themselves and end the night with a kiss and a dip in the Coterie pool. 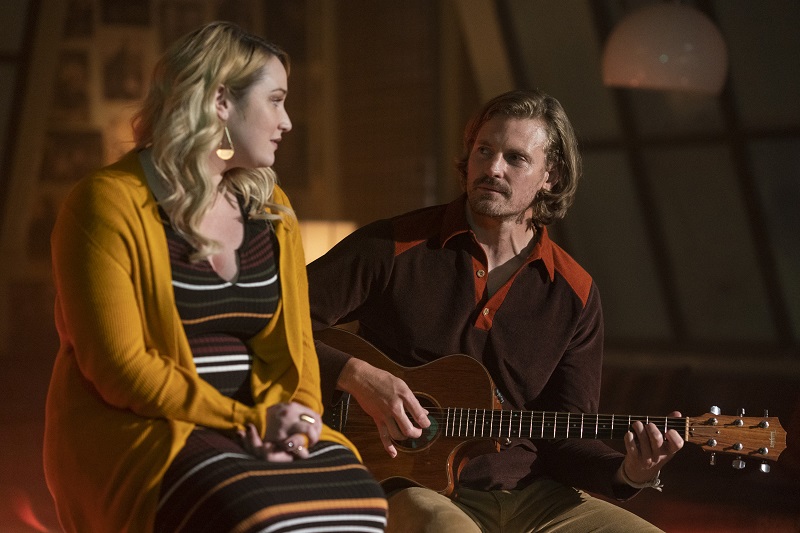 Malika’s word of inspiration for Davia’s performance is “breathe” and while she’s at a loss for what it really means, she forges ahead in writing a funny song to fulfill her obligation for the night. She recruits the resident Coterie musician, Dennis — who got “share your secret” as his inspiration phase — to help her craft a catchy hook. But instead of helping, Dennis offers a different idea: strumming the melody to Swell Season’s “Falling Slowly” on his guitar. I should pause here to note that this is one of my favorite songs ever (it breaks my heart anew everytime I hear it) and between this and the Quince group dance set to J.Lo’s “El Anillo” I’m starting to feel personally targetted by Good Trouble‘s music selections. But I digress…

Davia sings along for the first few lines but when Dennis joins in, the song lyrics hit a little too close to home and Davia puts a stop to their impromptu duet. She tries to go back to work on her funny song but this time Dennis interrupts by telling Davia something he’s been holding onto for a while: he slept with her mother. For a moment, Davia’s upset…and so am I, I totally ship these characters…but thankfully, Davia puts the pieces together. Dennis didn’t sleep with her mother, her mother just wanted him to think that he had so that when she propositioned him again, he wouldn’t be so reticient. Dennis is stunned; he thought he’d crossed this line from which they could not return.

“Any chance of what?” Davia asks.

The way Dennis feels about Davia is so obvious. It’s right there. It’s right on the tip of Dennis’ tongue — you don’t sing “Fallen Slowly” with someone if you don’t have feelings for them, them’s the rules…didn’t you see Once? — but Davia just needs him to say it out loud. Davia has internalized all her mother’s nastiness about her weight and what she does and doesn’t deserve…and she won’t believe it’s real unless Dennis says it out loud. And, of course, he doesn’t…he can’t…because Dennis’ feelings of unworthiness run deep. Instead, Dennis pretends as though he was worried about losing her trust. The heartbreak flashes, almost imperceptibly, on Davia’s face but she assures Dennis that she trusts him and that he’s her best friend.

Later at the party, Davia takes her turn intending to perform the song she wrote with Dennis accompanying her but again, he plays the melody to “Falling Slowly.” Dennis starts to sing and Davia joins in…and soon it’s like they’re the only two people in the room, singing this beautiful song to each other.

After they’re done, Davia pretends it was all an act — even as she wipes the very real tears off her face — and this time, the heartbreak flashes almost imperceptibly on Dennis’ face. They’re playing my favorite songs, they’re getting me emotionally invested in straight couples…oh, Good Trouble, what are you doing to me?

+ This episode was directed by the inimitable Chandra Wilson AKA Dr. Miranda Bailey.

+ Callie and Mariana fail miserably at their “Sister Act” inspiration. Guess who’s fault that was? The sisters have just been out of sync lately and this week, the fallout from their fight impacts Mariana’s relationship with Raj.

+ After discovering that Jamie’s a Republican last week, Callie’s pulled away from her relationship. It may have been the smartest decision that Callie’s made in years. Of course, by the end of the episode, Jamie’s burned his voter registration card and suggested that Callie move in with him.

+ Next week: Malika faces a choice about her future