It’s Davia’s birthday. But it’s not just any birthday, Davia points out. It’s her re-birth day.

Today is a new day, she pledges. Twenty-five will be a year of big changes. She’s going to start respecting herself. This is the year she’s finally going to figure out what is her true passion in life and find someone (who’s not married) to enjoy that life with her. She deserves to feel special and she knows it now. This is the year all Davia’s dreams come true. She’s convinced. But birthdays are as much about looking back as they are about looking forward and, to varying degrees, everyone faces that challenge this week. 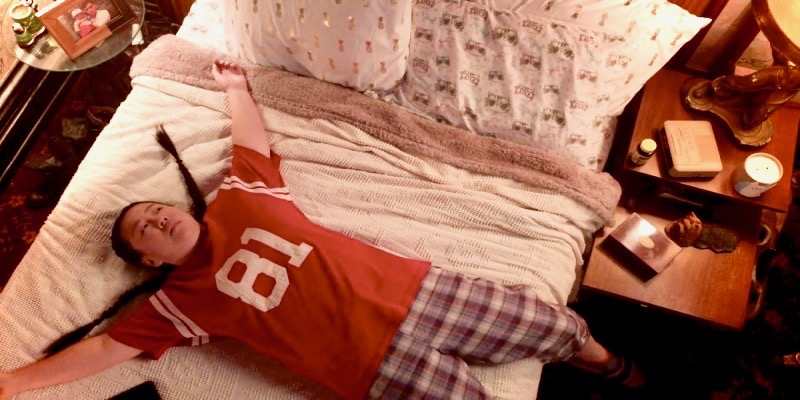 Buckle up Alice! You’re going to have a long night.

Alice’s challenge comes in the form of Sumi… because, of course it does. She’s unencumbered by her relationship this weekend, as Meera is out of town, and she invites herself to be Alice’s +1 to Davia’s “re-birthday bar crawl, amazing race, trivia challenge sort of deal.” Alice acquiesces because she’s Alice and because things with Joey have fallen apart so it’s not like she had another option. Sumi gleefully celebrates as she and Alice get to be on the same team and while it feels sort of like flirting, I chalk it up initially to competitiveness. But then they’re in their Lyft on the way to the night’s first bar, along with their teammates Bryan and Jamie, and Sumi’s clearly feeling a little nostalgic about the days where outings with Alice and the Coterie gang were a regular thing.

Jamie makes small talk with Bryan who introduces himself as Gael’s boyfriend. Everyone’s surprised by the revelation. To his credit, Jamie’s surprise about this revelation is less about the fact that Gael’s dating a man and more about the fact that Callie didn’t tell him she and Gael were no longer a thing. Alice is impressed that Bryan was bold enough to ask Gael to be exclusive.

“I don’t think I’d have the guts to tell someone to choose me, in case they didn’t,” Alice admits.

“Who wouldn’t choose you?” Sumi asks from the backseat, dispelling any doubts I had about her being flirtatious.

Subconsciously, Alice yells at Sumi — “You! When you dumped me for Meera!” — but outwardly, she just dismisses Sumi’s flirtations and presses on with their night. The flirting continues at the bar where Sumi and Alice reminisce about their trip to Mexico. After picking up a win for their team in a wing eating contest, the party moves to a local gay bar. Davia offers participants in the trivia challenge 10 points for kissing a total stranger or someone you’ve never kissed before. Malika kisses Davia to earn her 10 points and Gael follows her lead by kissing Alice (I know this scene was supposed to be cute but he kissed her after she said no). 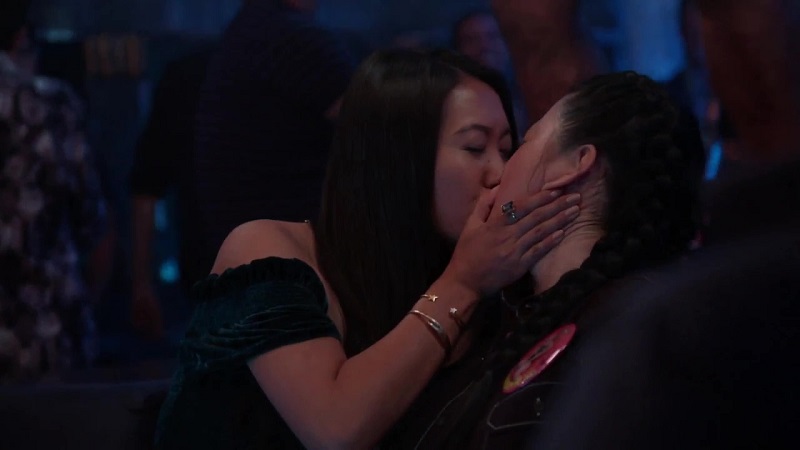 Well, Meera, they say you’ll lose ’em like you got ’em, so maybe this is fitting.

“Geez! Now I need something to clear my palette, please,” Alice laments, wiping her mouth from Gael’s liplock. Not knowing what a palette cleanser is, apparently, Sumi pulls Alice into a deep kiss to wipe the taste of Gael from her lips, much to the disbelief of everyone else. Afterwards, Sumi skips away to get Alice a beer, leaving Malika enough time to set Alice straight (figuratively speaking, of course).

“What the hell are you doing?” Malika asks. “[She’s] stringing you along like she always does. What isn’t it happening with Joey? You’re into her.”

Alice admits that she is interested in Joey but she’s scared about what’ll happen when Joey finds out that Alice isn’t out to her parents yet. Proving that giving advice is so much easier than taking it yourself, Malika urges Alice to put herself out there: let Joey in and allow her to make the decision for herself. Maybe it’ll work out, maybe it won’t, but if Alice doesn’t take the risk, she’ll be alone for the rest of her life. It’s a little dramatic but still, I love that advice. The friendship between Malika and Alice is, hands down, one of my favorite things about this show. 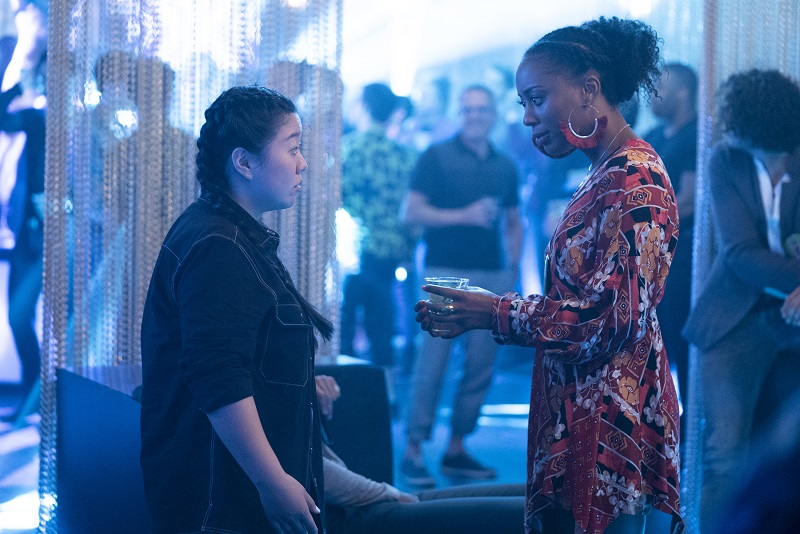 My friends, real friends, better than your friends,

After craziness ensues at the club — a disco ball mysteriously gets stolen — both Sumi and Alice find themselves back at the Coterie enjoying some ice cream. Sumi flirts suggestively but Alice says goodnight and opts to take Malika’s advice. She heads back to her loft to call Joey. After several hilarious attempts to leave the perfect voicemail message, Alice admits that the reason that she didn’t want to go on Joey’s friend’s radio show was that she wasn’t out to her parents yet and she hopes that, now that she’s been honest, she might have earned a real second date. She promises Joey that she’s over Sumi – an admission she makes just in time for Sumi to hear.

It’s hard to know what to make of Alice’s misadventures this week. Is this just a case of “fake it ’til you make it” or has Alice really overcome her feelings for Sumi? And where’s Sumi’s head in all of this? Did she overhear more of the fight between Meera and Alice than we thought last week? Does she know about Alice’s feelings and, if so, why would she buy Alice’s admission tonight so readily? What do you think, dear reader?

In other lesbianiac Good Trouble news, the mamas a back next week so it’s incumbent that I fill you in on all the latest Coterie happenings, in advance of their visit. To do that, this week, I present to you:

The Men Are Trash (But Sometimes Not) Leaderboard: Good Trouble Edition 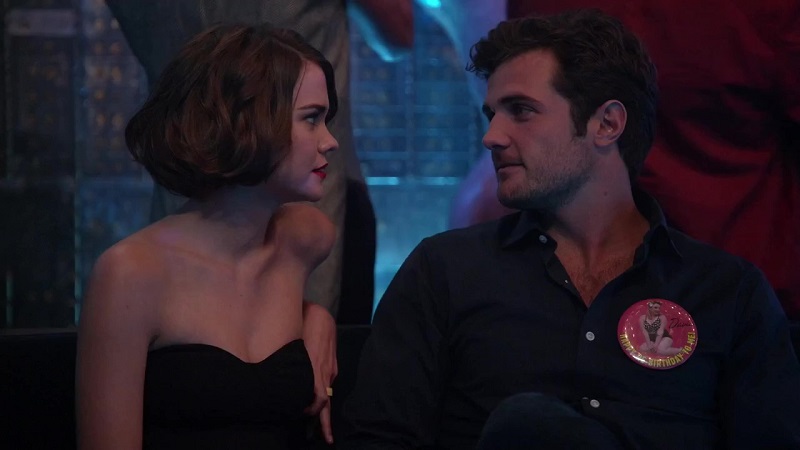 I try not to thirst over the Adams Foster girls but, honestly, Callie has never looked better.

I admit, I did not think that Jamie would last this long. I thought he’d be here for a while — throw a wrench into the budding relationship between Gael and Callie — and then disappear into the ether like AJ from The Fosters, but it looks like Brandon’s brother-in-law is here for the long haul. He wins points with me this week because he finally calls Callie out on her bullshit. Gael did the same last week, but he couched it in an accusation about Callie using him as a “Latino lover fantasy” that didn’t sit well with me (and seemed to come out of nowhere, TBH) but, ever the lawyer, Jamie is direct and pointed with his critique. “Friends with sometimes benefits” on Callie’s terms isn’t working for him anymore so he wants her to make a choice: either they can be friends or they can be something more. She has to make a choice.

It’s enough to spurn Callie into some self-reflection (miracles abound!). She apologizes to Gael for making him feel used and admits that she needs to work on not making everything about her. Later she texts Jamie back and commits to becoming something more. I still don’t think this is going to last, but, good for you, Jamie… helping our girl achieve some self-awareness!

Also? In this episode, Jamie strips off his shirt and dances with a gogo boy. He dances badly (the Sprinkler?!) but it’s hard not to be charmed by it.

Listen, I was skeptical about Dro from Insecure coming onto Good Trouble — Malika’s been through too much to have someone come in and play with her heart — but after his initial display of unconscious bias, not-Dro has rebounded nicely and become someone worthy of Malika’s affection.

Years of heartbreak have left Malika weary of personally investing in a romantic relationship and, to his credit, not-Dro refuses to accept the barriers she’s constructed between them. He doesn’t push, though. He just doggedly shows Malika that he’s someone who will be there, no matter what crazy hi-jinks her friends pull him into, and who is genuinely interested in knowing about her. He’s a good guy.

I know, I know, it seems pretty basic but the bar is very, very low for straight men these days.

After his defense of Mariana at Speckulate, Raj has been at the top of my the “Men Are Not Trash” leaderboard but he faultered a bit this week…mostly due to strong performances by Isaac and Jamie but also because of his own missteps.

The poor guy is still so thirsty. You want to invest in this friendship he’s building with Mariana — or even the slow-build towards the two of them being more than friends (#MaRaj) — but he’s so obvious about his interest in wanting something more that it gets a little cringe-y. Sometimes, he catches himself, like when he offers to take Mariana to Jitlada to try the dynamite challenge, but other times, like when Davia proposes a kissing challenge to earn points in her birthday game, Raj’s thirst is so clearly written on his face, I’m not sure how Mariana doesn’t see it.

I shouldn’t reward physical violence, I know, but when he punched Jeff in the face for his treatment of Davia, I cheered. Plus, he called Brandon an “ass” so I feel like that warrants a boost in status. It’s been interesting to see Dennis’ character development through his interactions with two Adams Foster brothers, Brandon and Jesus.

I’m kinda shipping Dennis and Davia now; I love that they push each other to treat themselves with respect. 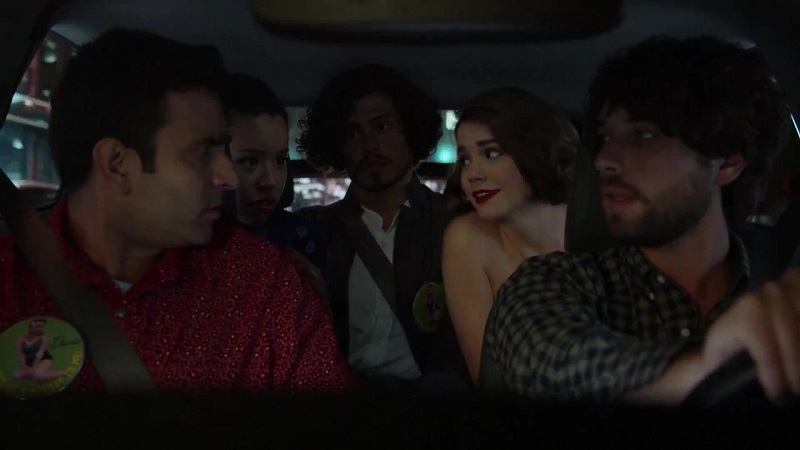 Driving in a coche with boys.

After his halfhearted and opportunistic embrace of his queer and Latinx identities last week, Gael had fallen to the lowest rungs of my leaderboard, so really there was no where for him to go but up. He wins points this week for his dominance at the butt-burner jalapeno wings challenge and his quick departure after Bryan’s display of pettiness.

That said, the only thing less convincing than Raj’s “I’m okay with being friends” shtick with Mariana is Gael’s assertion that he wouldn’t be with Callie at this very moment if it was an option.

I felt a little bad for Bryan last week after he witnessed Callie and Gael’s fight — a fight that suggested pretty heavily that he was Gael’s second choice — but his petty antics this week definitely run contrary to the serious relationship he says he wants.

These dudes are terrible, forever and always. They did, however, come up with a great shipper name for Mariana and Raj (#MaRaj) because everyone can’t be wrong all the time.

Because one punch in the face was not enough to deter him from his west coast booty call, Jeff shows up at the Coterie after Davia’s birthday festivities have concluded. Before things can go too far, Davia realizes that she’s about to start 25 the same way she spent much of 24 — substituting an affair with a married man for a genuine relationship — and she puts a halt to it. She knows she deserves better and asks him to leave.

Next week: the Mamas are back and there’s trouble in paradise.