So, a weird thing happened last summer: Netflix dropped an original movie called To All the Boys I’ve Loved Before based on the 2014 Jenny Han novel. It’s a cute teen romantic comedy that follows the misadventures of Laura Jean Covey after the love letters she’s secretly penned for years get unwittingly sent out. Despite it’s ultra-gay premise — I mean, c’mon, a girl who writes letters to her crushes when her feelings are too intense for her to process inwardly, only to read them over and over again? that’s hella gay — the movie’s mostly straight but I enjoyed it nonetheless (and so did lots of other people). A bulk of the movie focuses on — spoiler alert! — Laura Jean’s fake relationship with the most popular guy in school, Peter Kavinsky, played charmingly by Fosters‘ alum, Noah Centineo.

That’s where things started to get weird… because, after To All the Boys dropped straight women and gay men all over Al Gore’s internet were publicly thirsting over Jesus Adams Foster. Now, I’m a proud bisexual woman and far be it for me to undermine the spirit of 20BiTeen but a public lusting over Jesus Adams Foster? Nope, nope, nope, nope, nope. It was like the entire internet was telling me that my little brother was cute and I just wanted to stare at them all in disbelief. 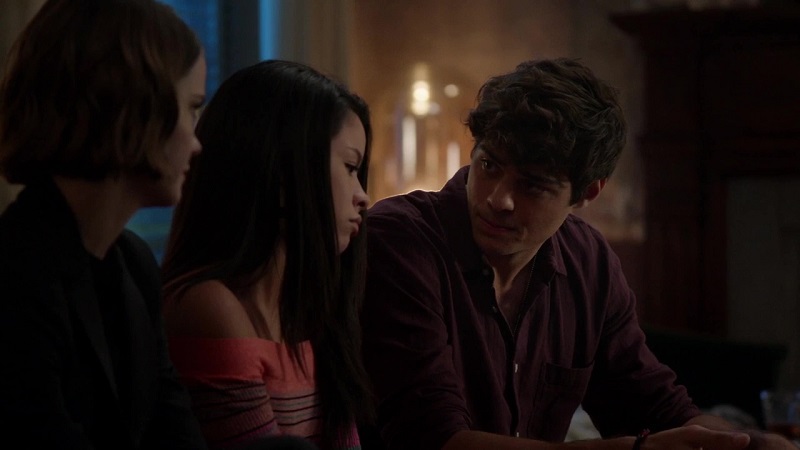 Centineo’s rising star power meant that this episode of Good Trouble — where Jesus drops in to visit his sisters in LA — presented a real opportunity for the show. There would, inevitably, be people who would watch this episode who had never seen Good Trouble before and only tuned in for their newly discovered crush. Centineo’s visit was an opportunity to reach new viewers and the writers took full advantage of that fact: showing Jesus at his most empathetic, in his interactions with his sisters, at his most savvy, in his interactions with a local venture capitalist and at his most charming, as he picks up a familiar face at a local bar. Also, he was shirtless at one point… if that’s a thing that interests you.

But what the writers also did was seize the moment to tell two really important stories about navigating the politics of the workplace as a woman. They dispensed with all subtlety — at one point, Mariana literally spells it out for you — and addressed issues like pay transparency, sexual harassment, true allyship and standing up for yourself in the face of misogyny, head on. It was as if they said: “Come to have your Noah Centineo thirst quenched but stay for one of the most feminist hours of television you’ll probably ever see.” 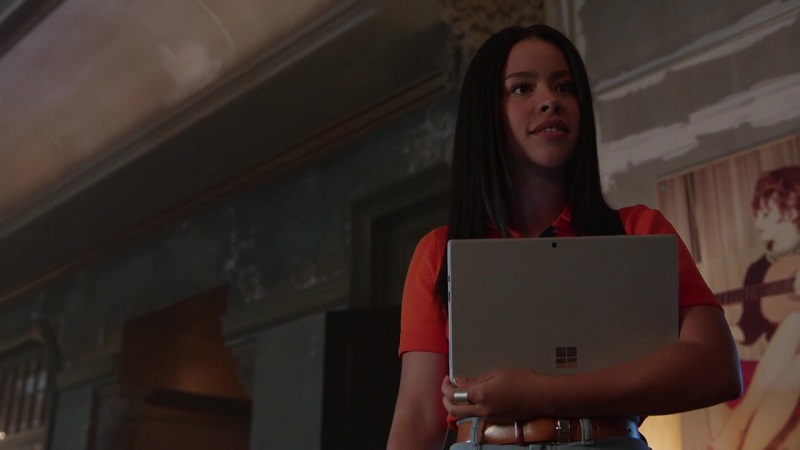 She’s a regular Norma Rae. Her mamas would be so proud.

This week, Mariana convenes a meeting with the other women from Speckulate which she affectionately dubs, “The Byte Club.” The club offers the women a safe space to vent about their problems and brainstorm ways to support each other in the workplace. At first, everyone’s reserved — more interested in figuring out exactly what the Coterie is — but after Mariana pops open a few bottles of wine, everyone starts sharing their experiences at Speckulate more freely. Without mentioning his name, Mariana tells the group about what happened with Raj and others chime in with stories of similar occurrences. They talk about all the ways they’ve been dismissed by their male colleagues at Speckulate… the names they’ve been called, the constant underestimation of what they’re capable of, how they can go from invisible, when they want to speak in a meeting, to not, when the guys need someone to take notes.

“It’s not that I don’t love my job,” one attendees admits. “It just sucks watching dudes who play video games all day get credit for your work.”

“And probably paid more,” another adds. 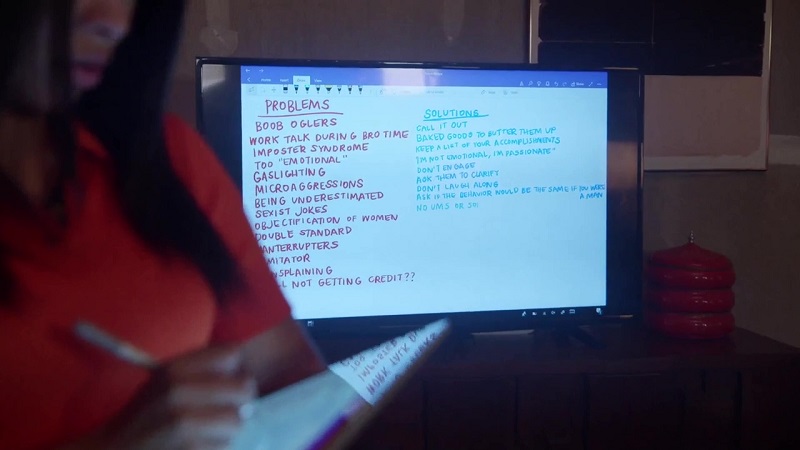 How to begin to overthrow the patriarchy…

And then, of course, Mariana being Mariana moves to make the meeting less about just venting and more about action. They come up with a game plan to get themselves heard in meetings. The next day, Mariana puts that plan into action: it starts with bringing baked goods — coconut bars prepared by Dennis — to the meeting to draw the men’s attention to her right away. When she speaks up, she can’t say “sorry” or “um” — nothing to diminish her authority in that moment. When Josh tries to “manterrupt,” she stands up, a form of nonverbal assertiveness, and makes her point again. Then when her hapless teammate, Sam, interjects to “himitate” — which is, effectively, just him, repeating exactly what she just said and taking credit for her idea — Mariana’s thanks him for agreeing with her. Then, to ensure that Mariana walks away with credit for her idea, another woman in the room amplifies what she just said. It works and Mariana finally earns some kudos from her boss.

After the meeting, Raj approaches Mariana and offers her more recognition for her idea. He takes the opportunity to apologize again for his attempt to kiss her and assures her that he truly believes that she’s a great engineer. She believes him but refuses to help on the social network project without credit for her contributions. Raj understands and pledges to do anything he can to help. It doesn’t take long before Mariana takes him up on that offer.

“We’ve approaching this all wrong,” Mariana says to an impromptu meeting of the Byte Club in the Speckulate stairwell. “We don’t need to navigate the culture here, we need to change it.” 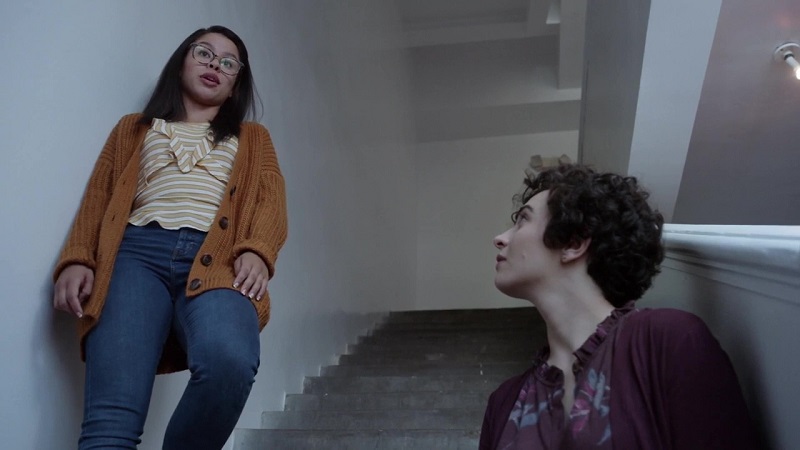 How to know if your workplace has a problem with diversity: all the women disappear into a stairwell and no one notices they’re gone.

She recommends starting with closing the gender pay gap in their end of the year performance reviews. Mariana advocates everyone sharing their salary information with each other and finding out what Speckulate’s paying their male employees. Casey worries that sharing salary information this way will threaten all of their futures — non-disclosure agreements are parts of their contract — so Mariana recommends doing the entire exchange anonymously. Knowing that the plan won’t work without the help of some men, Mariana asks Raj to help. He’s reluctant and, after an embarrassing encounter with an oblivious Josh, it looks like there’s no way Raj is going to come to the women’s aid.

But, boy, does Raj end up coming through in a big way… and, in doing so, models what real allyship looks like. He goes to Angela, the scary HR director, and tells her everything that’s been happening on the team, namely how Mariana’s been excluded from working on the social networking project. After Angela confronts the team leader, Alex, about it, in front of the entire team and Jesus, he lashes out at Mariana and Raj speaks up again. It’s enough to draw Alex and Sam’s scorn and Jesus’ respect. He apologizes for not having spoken up sooner and offers to share his salary information to further pay equity at Speckulate. THIS IS HOW A GOOD ALLY BEHAVES, PEOPLE. TAKE NOTES.

Meanwhile, over in Callie’s world, Judge Wilson is considering a case involving Elizabeth Rogers, a woman who was terminated after she reported sexual harassment in the workplace. Rebecca’s clerking the case and seems disinclined to side with the victim — not because she personally doesn’t believe the plaintiff but because there’s no evidence supporting her claim. Callie pushes her fellow clerk to give the plaintiff the benefit of the doubt as a woman but Rebecca is offering her perspective based on the law, not as a feminist. Later, Callie hands Rebecca a legal argument to support finding in Rogers’ favor: Westendorf v. West Coast Contractors of Nevada. Rebecca reminds Callie that it’s not her case and stalks off. 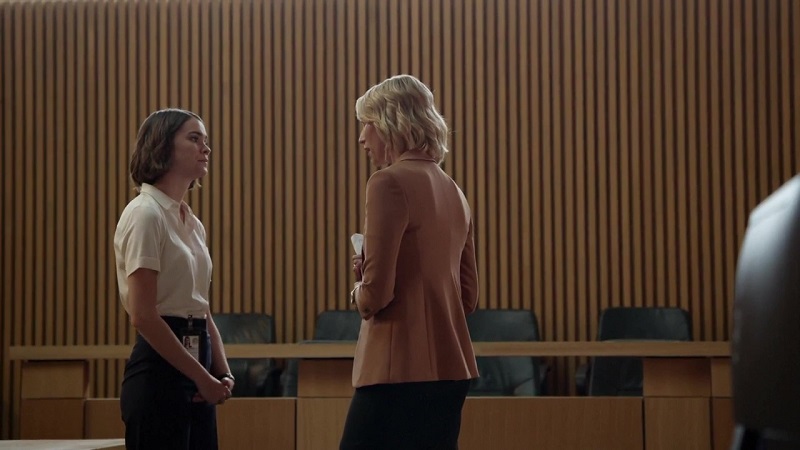 This friendship will last just long enough for Callie to discover “Becca” is sleeping with her brother.

When Callie learns that Rebecca used to clerk for Judge Handleman AKA “Judge Handsy-man,” she finally puts it all together. She tracks down Rebecca in the courtroom and apologizes for overstepping. She admits to taking the case personally and acknowledges her own history of sexual assault. Callie explains that her rapist escaped justice for what he’d done, only to do it again to someone else, and follows up by asking Rebecca if she’d been harassed by her former judge. She confesses what the judge did and laments not having anyone to talk to about it. Eventually, she told her grandfather, the Senator, and he got her transferred into Judge Wilson’s chambers. She took the job, assured that Handleman would no longer take on female clerks, but that agreement hasn’t been kept.

Of course, Callie being Callie, she pushes Rebecca to come forward but, of course, she can’t. Accusations of sexual harassment against a federal judge would make news — if only that were true, maybe Kavanaugh’s rise would’ve been stopped years ago — and could implicate her grandfather in a cover-up and, ultimately, destroy her relationship with her family. Callie reminds Rebecca that Handleman’s new clerk, Kate, doesn’t have a powerful family to protect her from his harassment and if she spoke up, her life would be ruined. Still, though, Rebecca refuses to intercede. But, like the Callie we’ve always known, she persists… leaning on Judge Wilson — whose respect Callie’s earned by being discreet about his issues at home — to do something about Judge Handleman.

If there is one shortcoming to “Byte Club,” it’s that Good Trouble‘s non-linear storytelling — that is, the use of certain moments of action or dialogue to provoke flashbacks, mirroring the way our memories often work — felt overused. The style isn’t usually something I have issue with and I value the technique, not only as a way to build suspense but also as a way to further differentiate the show from The Fosters, but here it just felt like way too much…almost to the point of distraction. Hopefully this doesn’t become a habit.

Next week, an Alice-centric episode of Good Trouble!