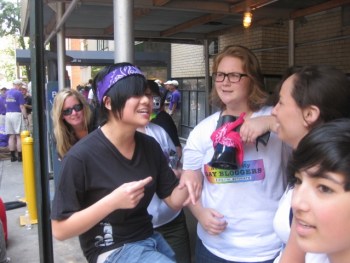 This past June, Team Autostraddle assembled in New York for Pride, Rodeo Disco, and copious amounts of wine. This gathering included a visit to a Manhattan gay bar, where I spent the first 20 minutes dancing stupidly and touching everyone and the next 20 minutes telling everyone how much I had to go to the bathroom. As tends to be the case, the only two lesbians in the entire freaking gay bar were using the ladies’ room, resulting in a line that I deemed impossible to wait on. Luckily, I had Intern X, who not only suggested that we visit the men’s room, but also shielded me from the eyes of scandalized gay men who walked in as I attempted to utilize the urinal (the stalls seemed to be taken in this bathroom as well, what the fuck?). We then high fived, and I gave her ten bucks to buy a beer for her and a girl.

And that’s when lesbian bromance was born.

Or at least ours was. As a doctor, I suspect that the lesbian bromance of KC Danger and X was not the first of all lesbian bromances. But let’s just say that we were the first ones to use the term “Lesbian Bromance” in this context, consider it coined, and get down to why now, and what it means.

Alas, this phenomenon brings about feelings of suspicion and doubt, perhaps even discomfort. Are we celebrating a term introduced by the patriarchy to reinforce gender norms for men? It sounds … unfamiliar.

See things are changing, and they’re changing fast, and they’re changing for everyone, across generations. Quite simply; there are more out lesbians now than there used to be and therefore if you’re lucky enough to live in a socially  liberal part of the world, the likelihood of having lesbians in your life besides just your girlfriend is getting higher and higher. 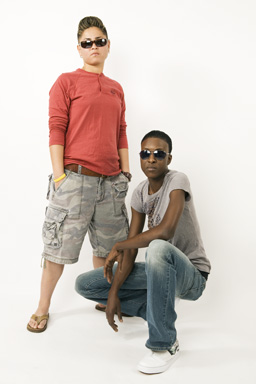 Lesbian bromance: it doesn’t have to be.

How long did you know your lesbian best friend before you guys started dating? Or before you kind of accidentally made out that one time? Don’t give me that face, you know it happened. These kinds of complications (one may call them “feelings”) run rampant through lesbian friendships. I mean, it’s natural. These things called “lesbians” seem to be rare, and when you find one that you truly, genuinely connect with them, it’s hard not to ask yourself, “So, what are our multi-cultural adopted children going to be named, and will we have to get rid of our cats?” It’s true: one way or another, most lesbian friendships are tainted by romantic intentions.

This is not the case in lesbian bromance.

See, regular bromance is sort of an unnecessary term in our culture. It really just means two men are friends, but the need for not-gay clarification comes from within the friendship.

Lesbian bros do not hold hands or sip wine; lesbian bros bump fists and knock back beers and yell “BROOOOOOO” loudly at each other across vast spaces.

These men are probably not perceived by outsiders as gay; it’s just something they need to prove for themselves. Two lesbians out together, however, are likely to be mistaken for a couple, hence the need for clarification.

Lesbian bros do not hold hands or sip wine; lesbian bros bump fists and knock back beers and yell “BROOOOOOO” loudly at each other across vast spaces. Hugging is okay, though bear hugs are preferred. They talk about their problems and are allowed to have feelings, because nothing brings lesbian bros together more than the shared bond of secretly having emotions.

Perhaps most importantly though, lesbian bros scope out girls. 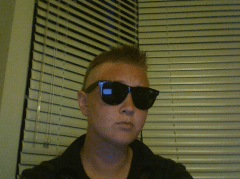 We use words like ‘chicks’ and ‘score’ facetiously. Mostly. We like to pretend that we’re cheekily mocking straight male culture and their objectification of women, but really, we like to look at girls too. Sexual conquest is celebrated in brohood, though perhaps in a softer, more respectful way. Because, y’know, we’re lesbians. As in like, “Yeah, I totally banged that chick last night. (High five) But also we had a lot of interesting conversation, she’s really smart, y’know? She’s a women’s studies major…if you know what I’m sayin’.”

And another lesbian bro will always know what you’re sayin’. 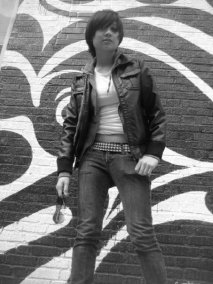 This is due to the fact the lesbian bro often intersects with another species of girl-on-girl: the lesbian player. It’s true, lesbian bros break hearts and take names. They don’t call you back because they’re too busy watching the Yankee game with their bro and complaining about how girls just won’t stop texting.

It’s a harsh reality, that of the lesbian player, but we all know that she is necessary. Ilene Chaiken tells us we are all connected, and we believe that it is so. The lesbian player makes it happen.

Why is Lesbian Bromance So Important?

Lesbian bromance is beautiful in its simplicity. It’s a friendship, just a friendship and nothing more. It’s secure in its lack of sexual tension and questioning of motives. It embraces sexuality and spits standards of femininity back in society’s face.

But is that what we should be doing?

Instead of conforming to ‘male’ culture, we are re-imagining female culture through a different lens. We are allowed to like things that are stereotypically masculine because we don’t believe that interests or mannerisms should be gendered. We celebrate a new kind of femininity framed through the standards of masculinity; we look to the past and reflect nostalgically upon our tomboyhoods. We’re girls who like girls who act like boys, if that’s what you wanna call it. 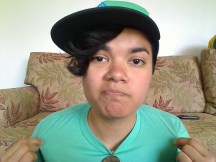 See “Bromance” is often explained by the phenomenon that “recent generations of men, raised by feminist mothers in the 1970s, are more emotionally open and more expressive.” Sex in the City was reveled in the 90s for showing a new, allegedly more powerful sort of female friendship that combined inherent emotional openness with financial and sexual independence. Lesbian Bromance takes that evolution to higher ground, but without the Achilles Heel of consumerism and wedding fetish.

We don’t really care though, we just wanna kick back, watch the game History Channel, and give some hugs. You know; like we own the place.