It’s been 40 years since clinical psychologists Pauline Rose Clance and Suzanne Imes entered “impostor phenomenon,” better known today as imposter syndrome, into the modern lexicon. In their study, Clance and Imes worked with 150 highly accomplished women who, nonetheless, “maintain a strong belief that they are not intelligent; in fact they are convinced that they have fooled anyone who thinks otherwise.” In the years since, we’ve expanded how we define this phenomenon but the crux of it remains the same: if you can’t internalize your successes — even if that success is getting up and walking through the world as your authentic self — you may suffer from imposter syndrome.

And by you, I mean me too: as I wrote back in November, “[imposter syndrome] is something I confront on a semi-regular basis. Everyday there’s a little part of me that screams that I’m just not enough… not smart enough, not talented enough, not pretty enough… just not enough. Everyday, I worry that this is the day I’ll finally be exposed as a hack and whatever success I’ve achieved will be snatched away.”

Imposter syndrome can happen to anyone but it’s particularly prominent among folks from marginalized communities, so getting to see it through the eyes of Mariana, a Latinx woman in a field dominated by self-absorbed racist and sexist white men, and Gael’s sister Jazmin (Hailie Sahar), a trans woman just trying to be herself in a cis world that doesn’t value that authenticity, made for a really great hour of Good Trouble. But while I could relate to Mariana and Jazmin’s experiences, the thing I liked most about “Imposter” was the mirror it put up to other characters, namely Raj and Gael, who despite the best of intentions — and their own experience as imposters — add to an environment that makes Mariana and Jazmin feel like they don’t belong. Privilege is blinding, sometimes, and we need mirrors to show us things we might have missed. 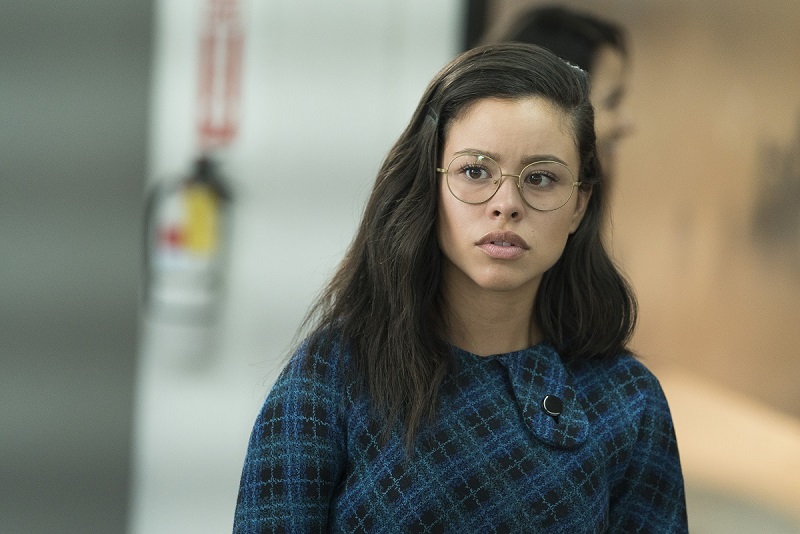 Mariana wakes up, still dreading going to work at Speckulate. Clearly still threatened by her ability to develop new app ideas (which he stole and claimed as his own) and the speed in which she can complete projects, Mariana’s techbro team leader, Alex, is taking out his anger on her in front of the entire team. He’s still mispronouncing her name, leaving her out of the team’s social interactions — preparing a team costume for guys only for Speckulate’s upcoming 5th anniversary costume party — and when the team is tasked with a big new secret project, he cuts Mariana out entirely. He blames her omission on her relative inexperience but, given that he’s the team leader, maybe he should actually think about leading.

Thankfully, though, Mariana has a few places she can turn for comfort… or, at least, she thought she did. After that awkward meeting for drinks that Raj thought was a date but pretty clearly was not, Mariana and Raj have established a good rapport as teammates. They lament to each other via text about Alex and Sam and when he gets stuck on coding his portion of the super secret project — the [whisper voice]new social network[/whisper voice] — he reaches out to Mariana for help. She invites him over the Coterie to work on code and, once again, he reads the situation all kinds of wrong. He’s flirting but Mariana is so grateful that someone at Speckulate is extending her some kindness, she doesn’t even notice. He thinks she’s flirting, she actually just being nice. He thinks she’s caressing his knee, she’s actually just reaching over to his computer to correct his syntax. He leans in for a kiss and she promptly pulls away and calls him out on it. Embarrassed, Raj rushes out of the room. 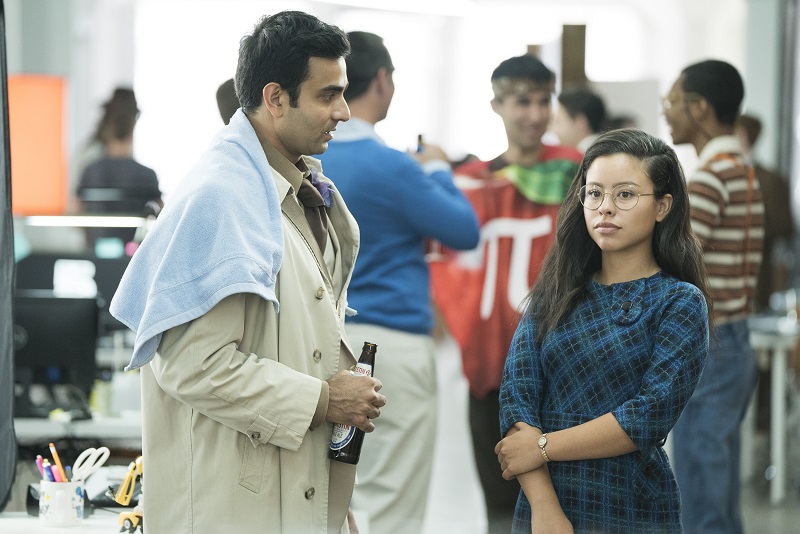 But she said it was fine, tho?

The next day, at the Speckulate anniversary party, he apologizes and, though, she initially assures him that it’s fine… which, of course, is code for it definitely not being fine. When he comes back to apologize again, Mariana rethinks her approach and stands up for herself:

“Actually, you know what? It’s not fine,” she says. “And it’s, it’s not about misreading signals, it’s about it being totally inappropriate to try to kiss one of your co-workers. I mean, like, duh. I mean, seriously, did you really think that asking me to help you with your work and, and telling me that I have such great ideas and then trying to kiss me wouldn’t make you look like you’re completely full of crap and make me feel even more disrespected and vulnerable than I already do around here? So sorry but sorry doesn’t cut it.”

Mariana’s other ally in the workplace, Casey, deals her another setback but, thankfully, it’s resolved quickly. Mariana steps into the meditation room to lament Alex keeping her off the team’s new project and Casey’s stunned. She snaps back that Alex is right and Mariana needs to do the basic work so she can figure out how things work at Speckulate. What she’s masking, though, is her frustration that the [whisper voice]new social network[/whisper voice] has been given to Alex’s team and not hers, as was promised. On top of that, Casey’s boss, Josh — the same guy who kept Mariana from a meeting with Speckulate’s CEO — just lambasted her, in front of her entire team, for a mistake that was mostly his fault. Casey apologizes to Mariana for their earlier encounter and assures her that she deserves to be there. Gratified by the solidarity, Mariana returns to her desk and sends an e-mail out to all the company’s women. 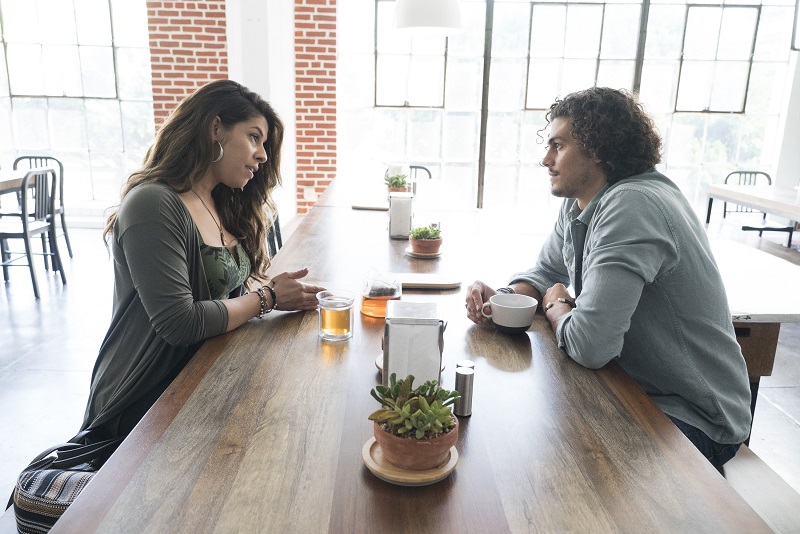 Meanwhile, Gael’s sister, Jazmin, is struggling. After losing her retail gig, despite having the highest sales in the store, she’s looking for a new gig. Gael doesn’t understand why this keeps happening — as if his sister is responsible for other people’s bigotry — but Jazmin is determined to not let the bigots stand in her way. Her search is being hindered by the fact that her identification don’t match her name or gender so she wants to get a lawyer to help her with the paperwork. They move on to talking about their family and Gael, like a wistful teenage boy, wants his family back together again. He encourages Jazmin to meet their parents halfway but Jazmin doesn’t know what the halfway point between truth and bigotry.

“I mean, you shouldn’t have to,” Gael says, “but you know, sometimes, you gotta put up with crap, you know, to keep people in your life, to keep a job. You don’t have to drag everyone who offends you.”

I’ve never been where Jazmin is but if I had a dollar for every time I’d heard some version of that statement from someone, I’d be a very rich woman. What most folks who say stuff like that don’t understand is that for every person I drag for being racist, sexist, homophobic or just generally bigoted, there have been dozens of racist, sexist, homophobic or just generally bigoted things tossed at me that I’ve just swallowed quietly. We suffer so many indignities but stay silent most of the time to make others comfortable. I am a woman of color in Trump’s America, I can’t be out here angry all the time… neither I nor Jazmin are afforded that privilege. It’s maddening that Gael doesn’t see that.

Gael recruits Callie to help his sister with her legal issues and discovers that the reason Jazmin needs legal help is that she has a felony conviction and ID changes are tougher to make with a record. She never told her brother because he didn’t want him to tell their parents and, more importantly, she didn’t know if he’d support her… and given the ridiculous things he’s already said in this episode, she was definitely right to doubt him. Later at the Speckulate party — where Jazmin’s working as a cater waiter — Gael starts to recognize how wrong he’s been. 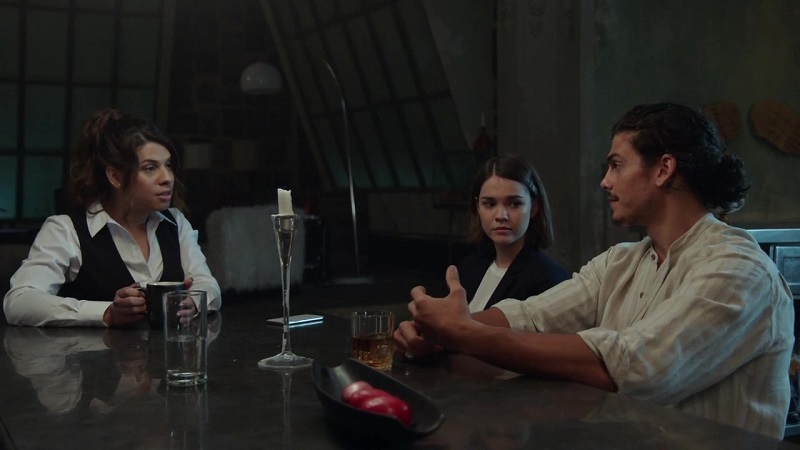 Callie finally gets a shot at doing the sort of law she’s been meant to do all along.

As the party winds down, Jazmin’s boss for the evening comes over and gives her paycheck for the night. He invites another waiter to work an event the next day but not Jazmin. She volunteers but the boss says he didn’t realize when he hired her that she was trans. He accuses her of lying to him and Gael overhears the conversation and interjects. Jazmin tries to pull him away but Gael uses his privilege as a cis man to confront the boss about his bigotry. It looks like a fight’s going to break out but Jazmin begs her brother to not risk his job and they both walk away. Back at the Coterie, Callie and Jamie talk with Gael and Jazmin about her legal options. Gael’s going to take a full-time gig at Speckulate over Jazmin’s objections to help pay her legal fees.

Gael offers a solid apology to his sister, “Look, I’m so sorry, Jazmin. You were right. I haven’t always been on your side enough but you can’t keep dealing with this shit and people can’t keep getting away with it.”

Okay, Gael. You are no longer cancelled. As the TV team’s resident bisexual, let me tell you what a relief that is.