It is so rare here in 2020, with 12 years of professional lesbian TV writing behind me, to be repeatedly surprised in a good way by a television show — but Batwoman just keeps stunning me with absolute delight, including multiple times during last night’s aptly titled episode, “How Queer Everything Is Today!” I’ve written about it before, but it bears repeating that Batwoman‘s writers have consistently hurdled played out clichés (emotionally unavailable masculine-of-center lesbian playboi), side-stepped damaging tropes (the cheating/confused bisexual), and given Kate Kane not one, not two, but three female love interests (past and present) in only ten episodes. Last night, they introduced a whole other fully-realized queer character who flipped the psycho lesbian trope on its head, and was the catalyst for a coming out storyline that’s never been done before, not even in comic books.

It starts when Kate saves a runaway train full of Gotham citizens and is then tackled to safety, off the tracks, by a Gotham police officer named Slam (a.k.a — and not affectionately — “Captain America”). Someone snaps a photo of them and gossip column tongues start wagging. Kate isn’t bothered by the fact that the tabloids are spreading rumors about her personal life; she’s furious that people are clocking Batwoman as straight and shipping her with a man. A woman does not get kicked out of the most prestigious military academy in the country for smooching her girlfriend, move to the frozen tundra to krav maga away her heartbreak, choose that hairstyle and wear a leather coat in all weather and park her motorcycle every place she goes so she can lean on it to have people assume she’s heterosexual, okay? 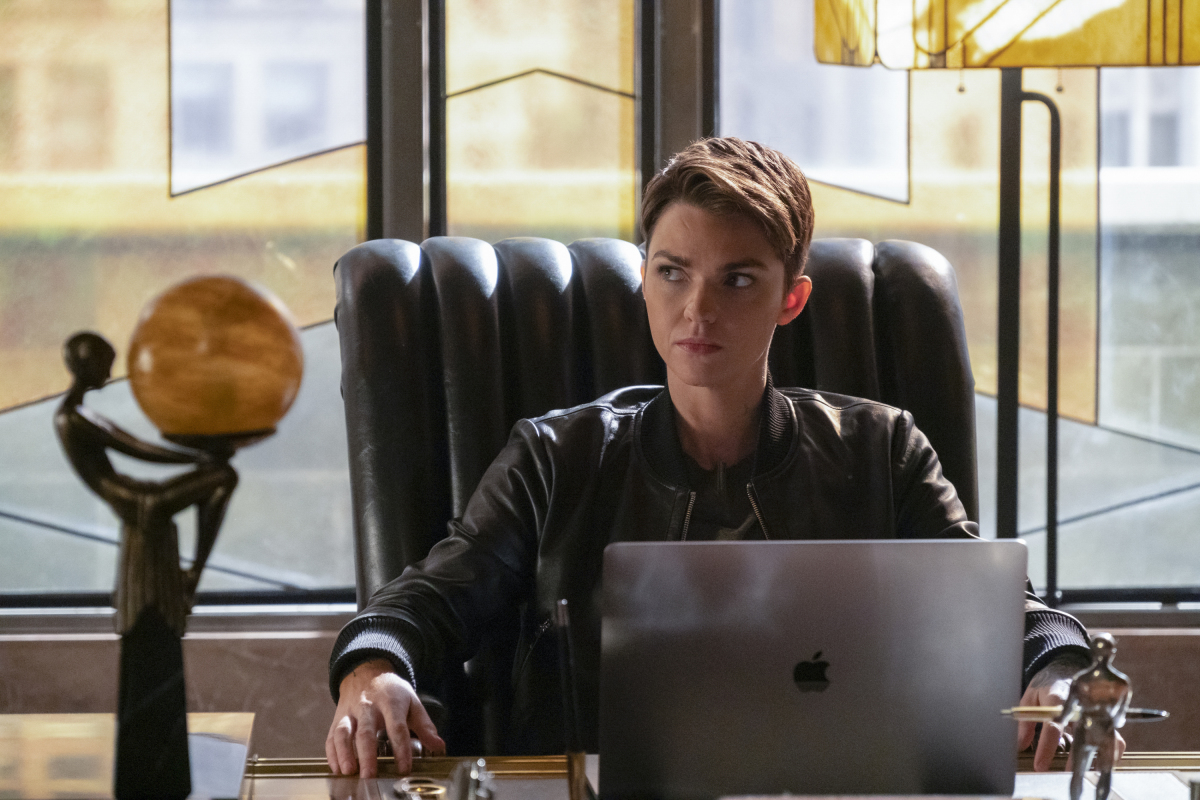 I did not sit through six seasons of Glee to have my gayness called into question!

Luke tells her it’s actually a good thing that people think Batwoman is straight; it puts a little distance between her and her secret identity. Kate’s not so sure. She scowls and mumbles about how she’s “very, very gay” even when there’s no one around to hear her.

While she’s coping with the straights, Kate’s also trying to figure out more about The Terrier, the hacker who takes over the train Batwoman stops from derailing, interrupts a live TV broadcast from the mayor, and threatens to expose everyone’s incognito browser secrets to the world if they don’t help crowdfund a five-million dollar payout. Batwoman follows some leads to a high school, where she comes face-to-face with the culprit of the hacks, a teenager named Parker who needs the money to leave home and support herself because her parents disowned her when they found out she’s a lesbian. Parker’s sure Batwoman can’t understand, what with being straight and in love with Captain America, and anyway so many people are out now and blah blah It Gets Better, yes, she’s heard — but the reality for Parker is that parents still kick out and ostracize their gay and trans kids, and she’s one of them.

Alice ends up unmasking Batwoman in front of Parker and she is stunned that lesbian socialite Kate Kane is under there. The most she ever hopes for was to “see herself in an ancillary TV character” and now she can see herself in Batwoman! Parker even saves the day by pretending to text Batwoman’s identity to the world, but actually texting the police for backup. 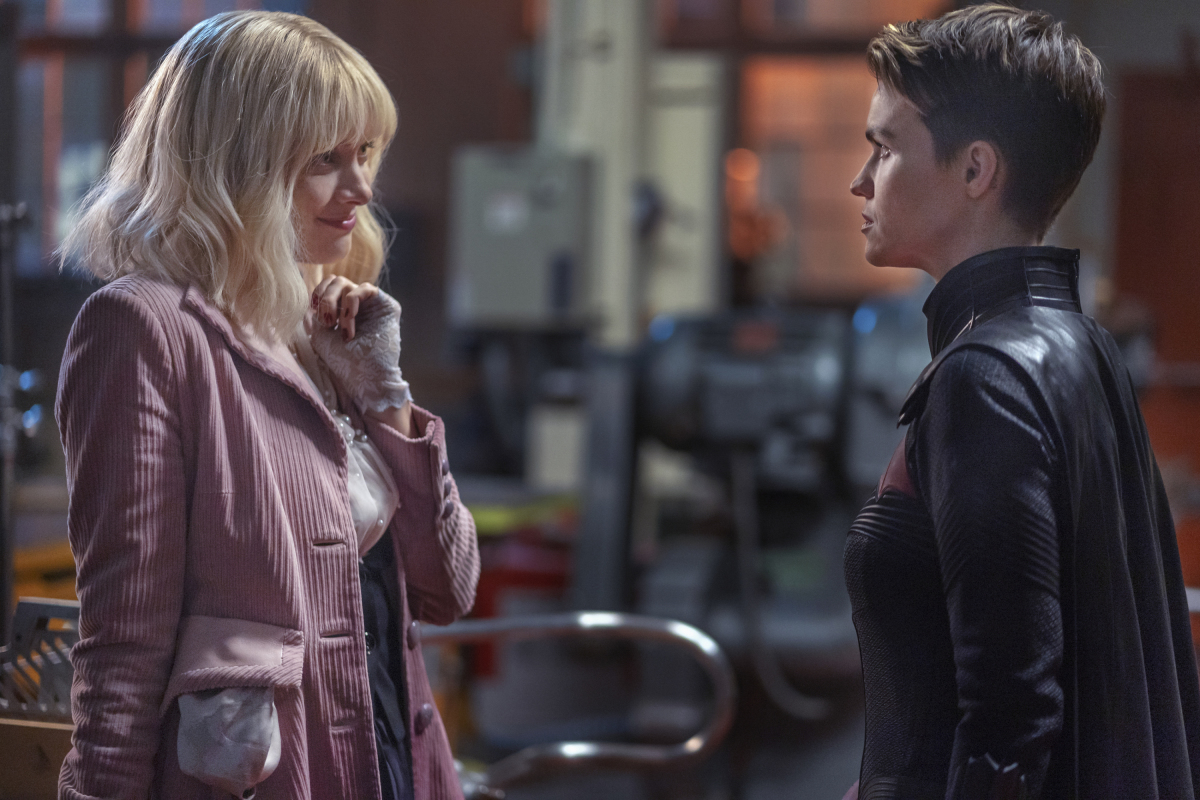 Who in the world am I? Ah, that’s the great puzzle!

Parker’s story is the push Kate needs to out Batwoman. She calls up her good buddy Kara Danvers and does a cover story for Catco magazine (which includes another enticing feature story about what the heck Lena Luthor’s been doing in Gotham City????).

When I chatted with showrunner Caroline Dries about the decision to have Batwoman herself come out to Gotham City, she said something I really loved: “I was thinking about how this is a show about a woman who is super strong, super confident, and very comfortable with who she is as a lesbian. She’s a badass and she can fight people and she’s tough and she’s vulnerable and has a big heart — and then she goes and puts on a costume and hides all of those characteristics. She becomes a different person, essentially, and it’s still strong and badass, but she has now hidden all of the things that make Kate Kate. That narrative doesn’t quite work for me, and so I thought, well, if it’s not working for me, maybe it’s not working for Kate either.”

That is, of course, the difference it makes to have actual queer people telling stories about queer characters. For so many gay people, myself included, my queerness informs so much of my identity and the way I move through the world; being perceived as straight would drive me to absolute distraction.

Parker brings the number of queer characters on this season of Batwoman to five, and there’s still a dozen episodes left, and Kate owns a gay bar now. It’s tough competition on The CW, but Batwoman seems determined to become the gayest show on TV.