Previously on Supergirl, there was a bit of a CRISIS, a trio of witches tried to start a band called The Worldkillers, and a mysterious entity called Leviathan was up to no good.

We open on a commercial for the DEO, voiced over by Lex, starring Supergirl, and featuring Lena. Alex and Kara are walking down the street while this plays on a giant billboard outside and Kara absolutely cannot stand it. 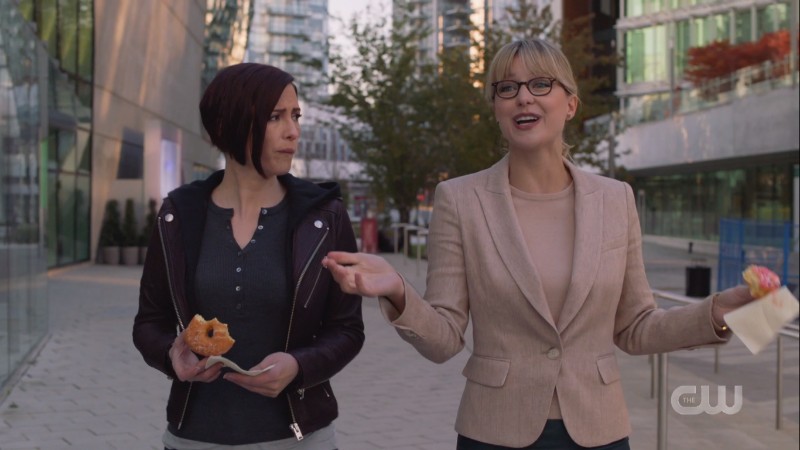 “Sure we saved the world but AT WHAT COST?”

Alex is trying to reckon with the two versions of reality in her head, but after spending a few months not remembering her own sister was Supergirl, she’s probably grateful to know the truth. Kara wishes J’onn could fix everyone in the world’s memories so no one would buy Lex’s shtick, but J’onn says that would be too dangerous, because not everyone would be equipped to handle such an existential… well, crisis.

Alex isn’t sure what they can do, and calls the DEO a Hellmouth, which makes her a canon Buffy fan, no take backs. Kara reports that things are mostly the same as she remembers at CatCo except for all the Lex Luthor hero worship. And speaking of Luthors and worship, Kara has to go talk to Lena and tell her everything. Alex says maybe she doesn’t have to, because Lena and Supergirl are partners in this timeline, but Kara won’t spend another second lying to her like she did the last time around. (Also when Alex said ‘partners’ at first my heart skipped a beat but when Kara didn’t react I realized she meant literally partners.)

Lena, as it turns out, doesn’t need to be told anything. Because she wakes up on the couch of her apartment and is very confused as to why the brother she killed is standing there. 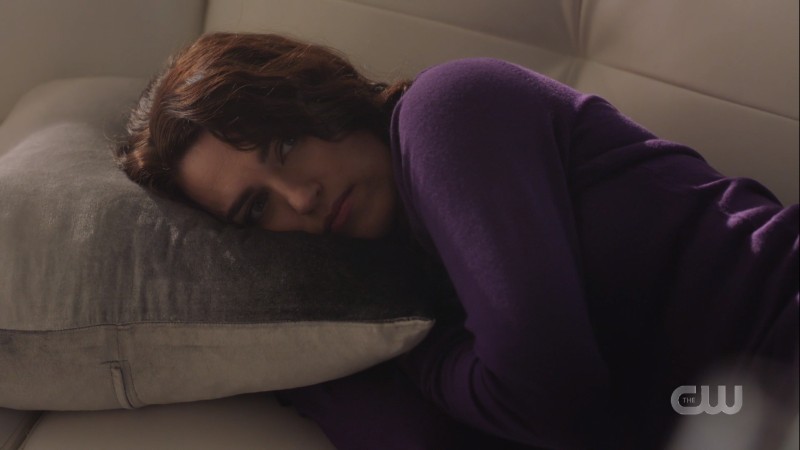 I know this is neither here nor there but the purple sweater + jeans combo was really great.

Lena remembers everything, and apparently Lex drugged her so she has been asleep for as long as it takes for Paragons to take down a giant Beebo. 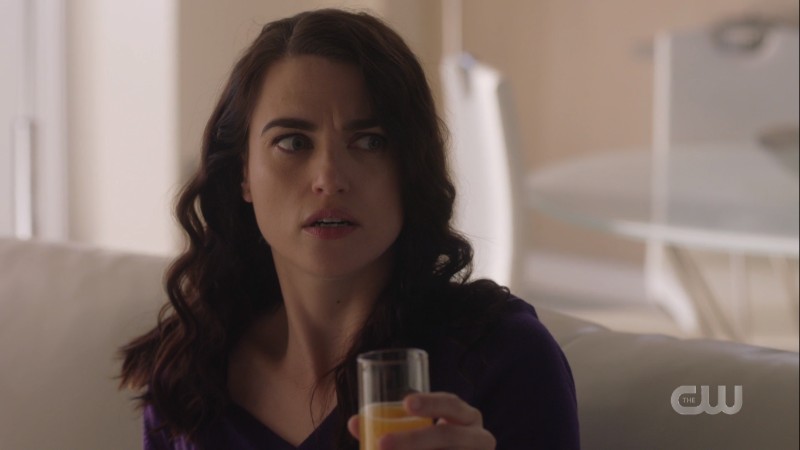 “Was Kara hanging out with that Kate woman again? No reason, just asking.”

Lex tells her that it was part of his deal with the Monitor that she stays safe and with her brain fully in tact, so now they’re in his version of the perfect world, which she decides is her own personal hell. 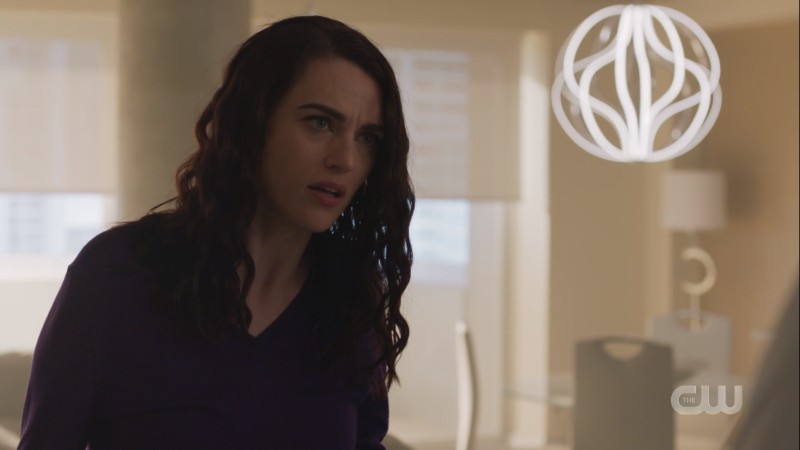 “Time travel and restoring the multiverse weren’t on my to-do list but I guess I could try to squeeze it in.”

Lena tells him to get out of her life but he tries to convince her that she needs him. He says he knows what went wrong with her last plan, and that she doesn’t need friends; working with him will solve both of those problems. Lena says that Lex was a Leviathan puppet before and asks what would stop him from being one again, but he has no idea who or what the heck Leviathan is.

Meanwhile, Brainy and Nia are having a cute, romantic walk down by the water when they run into… another Brainy. It takes Nia a second to process what’s in front of her. 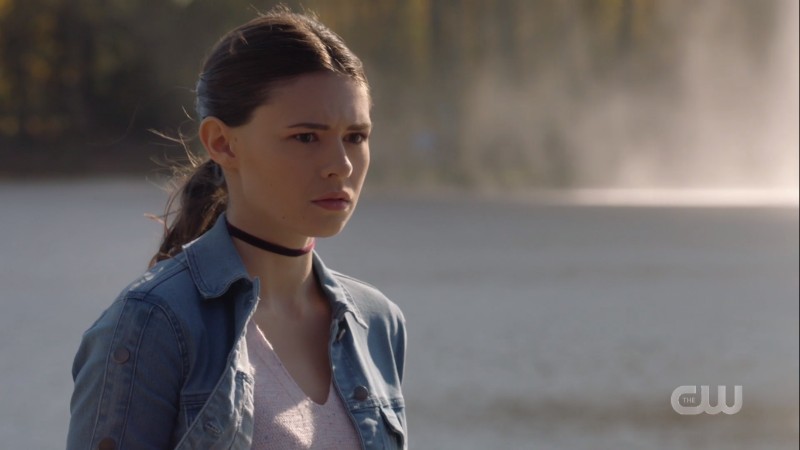 “Is this a sweet dream or a beautiful nightmare?”

The Brainys… well, Brainy, eventually deciding they need to go to the DEO but having different opinions about who is taking who there.

Supergirl flies to see Lena and tell her everything, but she stops her; she already knows everything. Lena asks if she thought it would make things right, being forthcoming this time around, but to Kara’s credit she never matches Lena’s barbs with being overly hurt or even defensive. She just calmly, and plainly says, with kindness in her eyes, that she will never hurt Lena again. 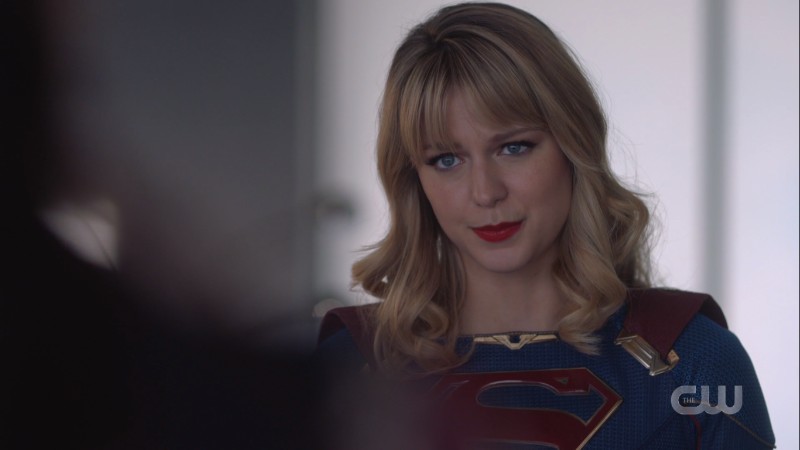 “Look, look with your special eyes. Into my puppy dog eyes that cannot be resisted. LOOK.”

She will never lie to her. Kara thinks they should work together, and Lena smirks and points out that Lex gave her a very similar speech asking her for the same thing. 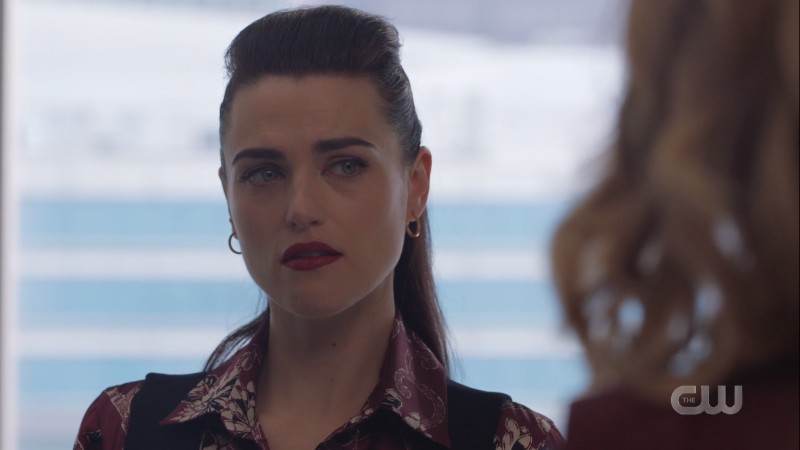 Look how much she wants to trust her. It’s right there in her eyes. There’s so much to work through but part of her wants to just… skip it.

Kara is mildly horrified but quickly backs down because she knows a lecture isn’t the way to get Lena to trust her again. So instead she just bids her to be careful and leaves.

When the Brainys storm into the DEO to demand action from a very confused Brainy, they soon learn that they’re not the only two; on top of our Brainy and Nu-Brainy, there is also a Lady Brainy. 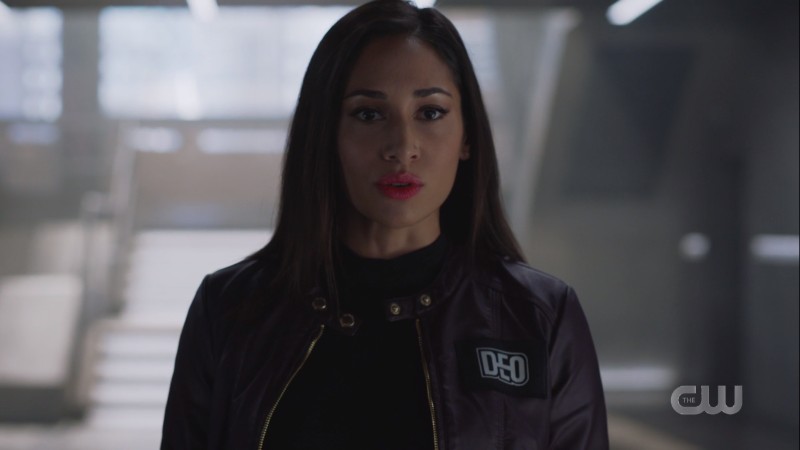 She called herself the head of the DEO and Alex puffed up and WHEW it was all a lot.

More Brainys show up, including an Emo Brainy and a Brainy with an eye patch, who stumbles in warning something about a bottle then dying in front of them. Our Brainy, who the other Brainys start calling Brainy Prime, looks a bit overwhelmed as Alex and the other Brainys realize that the dead Brainy was killed by a biosynthetic virus called the anti-life equation, and that they all must have gone through a wormhole of some kind. 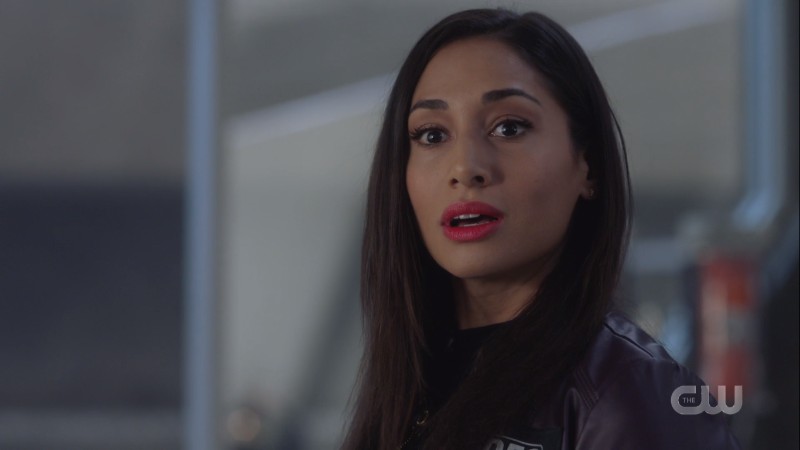 “I’m getting this feeling like maybe I was a ghost in a past life.”

What they don’t realize, until Our Brainy tells them, is that the multiverse is gone; so while yes they traveled from another Earth to get here, there is no going back.

While the Brainys try to process this news, Lex calls Agent Danvers and Supergirl into a conference room. He tries to get them to stand by his side voluntarily, and when it’s clear they feel resistant to this plan, he threatens them instead. 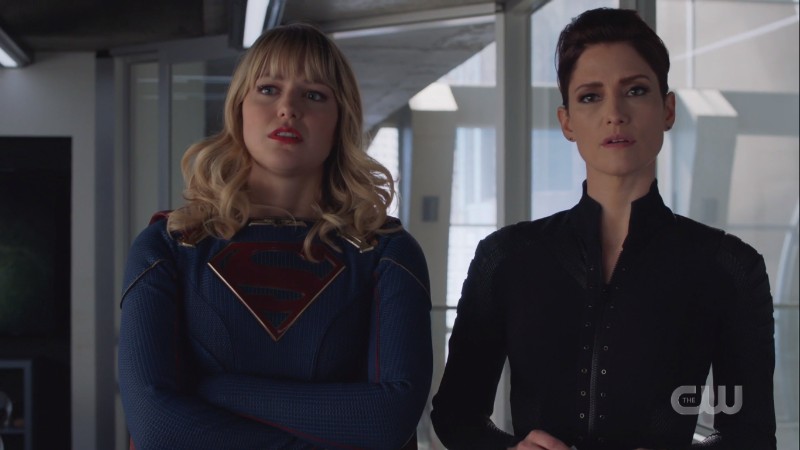 Across town at CatCo, Andrea is talking business plans when in walks her college mentor, who she introduces as Gemma Cooper, but is actually Gamemnae, the woman who took over Leviathan. Whether that means she’s not actually part of Leviathan in this timeline or that Leviathan is done working from the shadows is anyone’s guess.

At the DEO, the Brainiacs talk quickly and hivemind and realize they’re the only Brainys left, but Our Brainy can’t quite keep up. But still he goes with Supergirl to a bar, where there was apparently a wormhole, so everyone who was in any Al’s Bar in any universe, ended up here on Earth Prime in Als’ Bar. (There are multiple Als now.)

Included in this group of wormhole jumpers are a version of the three witches that tried to re-terraform the Earth using the Worldkillers. But, after a moment’s hesitation, Supergirl realizes this version of them do parlor trick magic for extra cash and seem relatively harmless. That’s when she realizes that the people in this bar are just orphans; their worlds were destroyed and they have nowhere left to go. 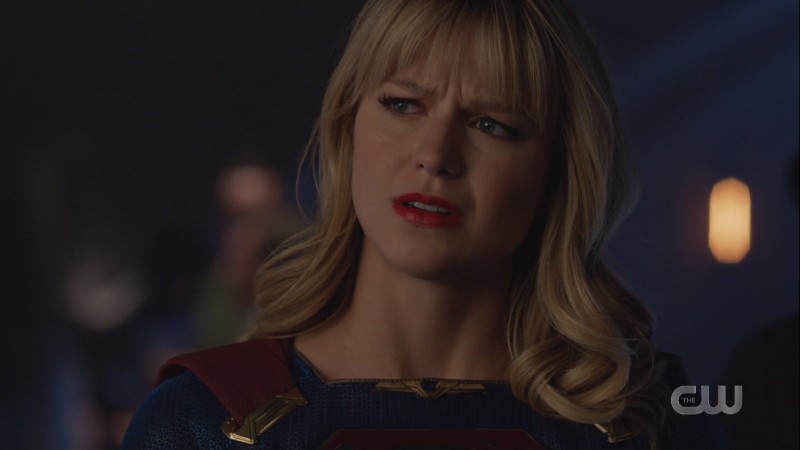 “So many metaphorical pods knocked off course…”

One of the Brainys, who I guess I’ll call Hip Brainy because he’s got a bit of a 70s vibe and a chill ‘tude, sees the glass a little more half full than that. These people are a miracle. The entire multiverse was destroyed but somehow, some way, these people survived.

Realizing that she’s no longer in jail, Lena goes to see her mother, who is in her ivory tower and dressed like a Desperate Housewife. Lillian didn’t have the pleasure of having her memories retained by her son or restored by the Martian Manhunter, but Lex did tell her everything and she took it at face value. Lena tells her that she wants to fix people at their core, and wants her mother to help her. But Lillian likes her life here and isn’t interested. Lena, I guess hoping that this version of Lillian will be a better source of motherly advice, tells her that she’s considering partnering up with Supergirl. 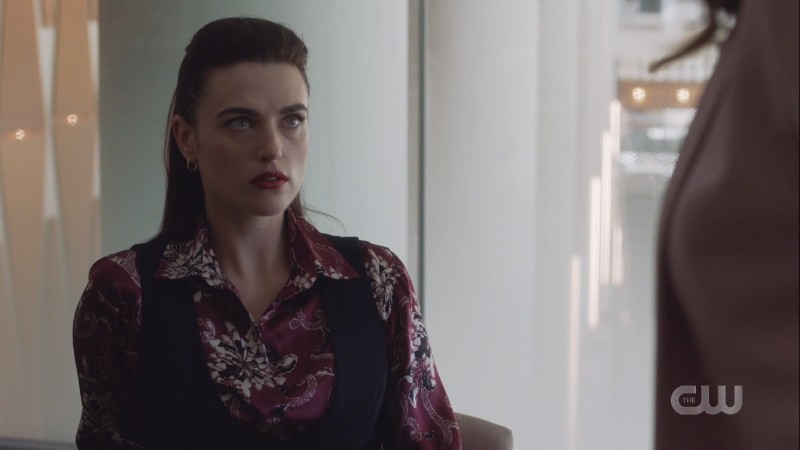 I’d watch a whole show that was just Lena walking into different rooms in different business-wear and sitting on different chairs.

I’m hoping that really Lena was doing that thing where you ask someone you don’t want to emulate what THEY would do to know what not to do? But I guess we’ll find out. Lillian tells her that sure, she could work with Supergirl again, but the chances are pretty high that she’ll eventually let her guard down, because she’s seen Lena and Kara together and knows that chemistry is undeniable. Whereas with Lex, there’s already no hope and no chance of ever trusting him, because that trust was never really built in the first place.

Speaking of parental advice, Alex is on the other end of the spectrum going to a healthy parental figure and asking her Space Dad what she should do about having to work for Lex; she doesn’t want to support him in any way, but she also doesn’t want to let the DEO down. He tells her a story about a time he broke the rules to do what’s right, He tells her to do what’s right, to listen to her own truth… and then makes a metaphor about running toward the bomb to be a hero, which I feel like is taking this good advice to a bad place when we’re talking about Alex “sure I’ll just jump out this window backwards” Danvers. 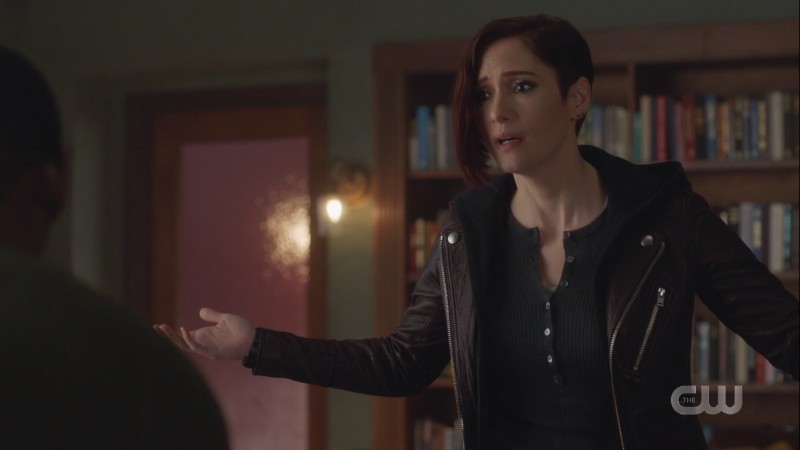 “We had a whole five-episode crossover without Sara and I having one single conversation about how we both have girlfriends now and we should go on a double date!!”