GLAAD announced their 29th Media Awards nominees today and guess what? Yes! You’re right! Autostraddle dot com has been nominated for “Outstanding Blog” for the fourth time. We were nominated in 2013, 2014, we won in 2015, and now we’re nominated in 2018! Also, Riese Bernard, Autostraddle co-founder/CEO/EIC, was nominated last year for Outstanding Digital Journalism Article for her comprehensive work about trans women on TV. 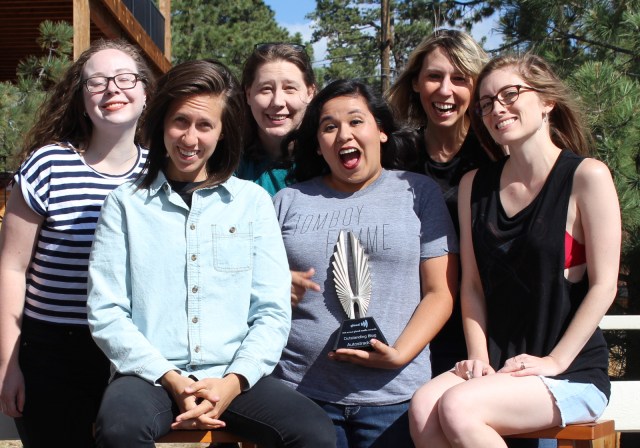 Remember 2015? You never even thought about Donald Trump once in 2015.

We’re really proud to share this nomination with some other rad independently published websites:

It took our senior editors several hours after we received the nominations yesterday for us to realize we’re on the list because we were busy doing the million things we do every day to make this indie publication we live and love flourish in a world where we’re constantly competing with LGBT websites that have major venture capital behind them, and LGBT verticals on mainstream websites that — you guessed it — have major venture capital behind them. Which is why this nomination is your victory too! We don’t have venture capital. We have A+ members who stand behind us and believe in us and lift us up, and we have readers who buy our Gender Traitor hoodies and Lavender Menace tees and Read a F*cking Book enamel pins, and we have A-Campers who sleep on bunk beds in cabins in dance their hearts out in the forest surrounded by other queer humans. We have you. And it’s a good thing we’ve got going here.

You’ll notice some other familiar names on this year’s list of GLAAD nominees, including former Autostraddle writer Gaby Rivera who got a very well-deserved nod for her comic book writing debut on America. (Congratulations, Gabby!) Plus a lot of your favs:

Battle of the Sexes

Professor Marston and the Wonder Women

One Day at a Time

And of course a Best Episode nod for Master of None‘s “Thanksgiving” episode.

We’re honored to receive this nomination for the fourth time (we think that’s the most anyone’s ever been nominated for Outstanding Blog, actually!). We’re really, really proud of the work we did last year. And we’re so excited to keep building this community and making the world better with you.