What does a lesbian look like? Until a few years ago, mainstream culture was pretty sure they knew the answer to that question, even though they didn’t. A lesbian looked like K.D. Lang or the gym teacher, right?

+
Now, all bets are off! The patriarchy and the lesbians have been warned and men are increasingly disarmed to meet girls who “look straight” but turn out to be gay (See: Chasing Amy) while women are increasingly disarmed to meet girls at gay bars who “look straight” (See:  The L Word). Meanwhile, the Obviously Out & Proud Homos wonder why they’re still getting hit on by men, and we’re all wondering why the doctor told us to close our eyes and think nice thoughts about our boyfriend while he administered a painful shot. 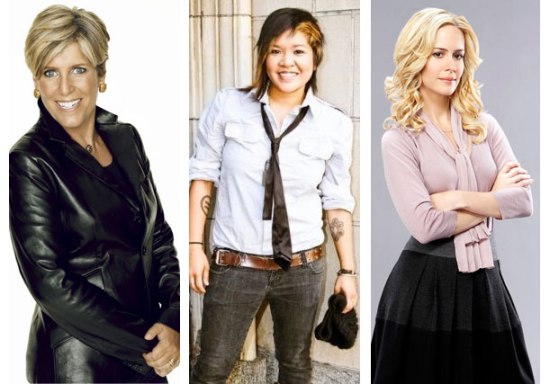 This doesn’t come out of nowhere. For centuries our civilization has measured a woman’s worth by her attractiveness to men, and our ensuing beauty rituals and fashion choices have long been attributed to desiring male attention/approval or acting as mindless slaves to the omnipotent power of the beauty industry.

Defining the minority’s “other-ness” by emphasizing obvious physical differences has been a key technique used by those in power to subject and withhold political & social power from the minority. On a practical level, it’s easier to openly express prejudice when you feel you can visually identify any potentially offended parties in your midst.

It’s weird, being part of a self-identified minority with no absolute methods of physical identification. Of course homos aren’t alone in that weirdness, but in a world where people are accustomed to easy people-labeling techniques, there’s people on every level who seem, in some way, to want to instantly be known and to know others based on physical cues.

It’s weird, being part of a self-identified minority with no absolute methods of physical identification.

But as lesbian culture moves out of silent secret places into the mainstream, and as civilization moves towards accepting style’s separation from Self as they once had to do when reconcving women eschewing dresses for long pants (while realizing that many women would still self-select dresses and other initially successful options), rejecting the maxim that anyone who doesn’t “look gay” must be straight is one of many silent conceptual evolutions that could, quite possibly, redefine gender as fluid, style as costume and labels as an option rather than a necessity. You’ll hear a lot of us complaining about the idea of “butch” and “femme,” but certainly for some people those words are important and useful.

But with this fluidity and increased visibility of lesbians of all attitudes, styles, shapes and colors comes a new set of expectations from others in our community and outsiders. If women are wearing makeup and paying special attention to style for either personal reasons or because they want to look a certain way for other women — it’s no surprise we’re inspiring alternating suspicion from our own, and fear from the patriarchy.

Our cultural gender belief system and societal structure ties masculine & feminine gender roles to biological sex, and therefore people who have traits of one prescribed gender role are expected to fulfill all the rest of the traits too. Thinking that lesbians are like men and gay men are like women is so backwards — the old term is “inverts.”

So, here we are at the crossroads. How do these shifting expectations and judgments play out in our everyday life? When are we guilty of reinforcing stereotypes when judging others? Can you identify a lesbian just by looking at her? Do you want to be identified?

This week we ask:

What do people think they know just from looking at you?

I’ve always been boyish. When I was a little girl I was able to pass pretty easily as a boy. My standard uniform growing up was jeans (or Hammer pants, don’t ask), a giant Chicago Bulls Starter jacket, a Chicago Bulls hat, and my long hair pulled back into a French braid. So it should come as no surprise to anyone that once, on a field trip, a lady at a museum got into an argument with me over whether or not I was a girl. I swore off dresses altogether in the 2nd grade, which my mother supported, but the rest of my family had a harder time with (we’re all good now, though. My family doesn’t care that I wear ties all the time and loves my girlfriend, so things are good there). I still get called “sir” somewhat regularly, especially recently at my grandfather’s funeral, where many of the elderly folks kept asking my Aunt and Grandmother, “and who is this young man here?”

So naturally, I have a lot of feelings about this topic.

The stereotypes that I find the most annoying are the internal ones, the ones coming at me from other members of our community.

I hate the term “butch.”

I really don’t like it and I especially hate when people use it to describe me.

Usually it’s people who don’t know me very well or who haven’t spoken to me very much who make this mistake, because if you’re around me for any significant period of time you’ll realize that while I look androgynous, I am most definitely a girl. I take forever to get ready, I am exceedingly vain (as evidenced by the fact that I check myself out — usually my hair — whenever I pass any reflective surface), and I have many neuroses about cleanliness, neatness, and coordination. My concept of gender is probably most similar to that of a gay boy, as those were the people I spent the most time around during my formative early college years, when I was really figuring out who I am. While I am handy around the house and a techy nerd who enjoys objectifying women, I’m also really into style, fashion, and don’t like icky things. [“You also lose in arm wrestling competitions, that’s pretty girly of you.” – Robin] 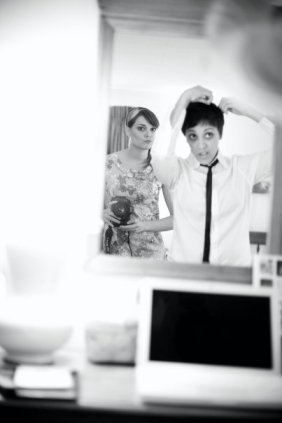 Those sartorial phases of attempting to make my outward appearance match the girl trapped inside have never lasted very long. I guess water finds its own level… or whatever.

Recently a fellow lesbian told my girlfriend Robin that she was also into “butchy girls,” which Robin found hilarious. So, earlier this evening when I was thinking what I’d write for this roundtable, I had a realization: the stereotypes I find most annoying are the ones coming at me from the inside. It’s other lesbians who assume I’m “butch” and it’s my gay boy friends who make the annoying lesbian jokes. So until we can learn not to pigeonhole other members of our community, we’ll continue being pigeonholed and stereotyped by the world at large. And perhaps that’s a bit of a stretch but I think there’s something there.

However, I admit that I do exploit my looks and the stereotypes therein and use them to my advantage. I don’t surround myself with straight people who would have generalized ideas about me and I also know that I can maneuver a crowd of straight men and not get hit on once.

So am I really the most reliable narrator? I’m obviously gay and am OK with that but I do think that the heteronormativity still prevalent in our society is extremely harmful and just kind of silly at this point. Assumptions only do one thing and we have all heard that joke before. 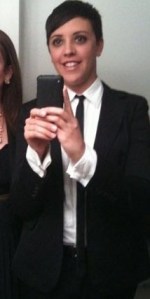 One thing I do know is how to spot another lesbian, so here’s a big hint: there is no set way to figure it out! It’s almost 2010, and while there are still the cargo-shorts-wearing, cell-phone-clipped-to-the-belt, be-mulleted sports fans out there, there are also younger lesbians who look just like anyone else. I think my gaydar is pretty decent but I can’t tell you a specific list of things that I think lesbians have or do, it’s just a sixth sense I guess. Takes one to know one?

Although Robin would like me to add here that when I first met her I didn’t know she was a lesbian, so there you go.

I’ll leave you with a conversation I had with my grandmother this weekend at my cousin’s wedding:

Nana: Carly, when I heard that man call you a boy at the funeral I was just… so mad!
Carly: It’s ok Nana, I’m used to it.
Nana: (shakes her head in disgust.)

This, from the woman who forbade me to wear a pants when I was in the 4th grade. My, we have come a long way!

Jan: Everyone thinks I’m this big dyke because I wear baggy pants and play sports and I’m not pretty like other girls. But all I really want is a big, fat weiner up my…
Andre: Amen, sister.
–But I’m a Cheerleader

NEXT PAGE: Laneia, Crystal and Lily