The only thing anyone can tell about my sexuality just from looking at me is that whoever is dating me isn’t really into boobs.

Other than that, I think most people assume I’m straight — my hairstyle isn’t alternative, I wear ‘girly’ makeup like blush and lip gloss, I don’t have visible tattoos or piercings, I’d rather wear a pair of kitten heels than Birkenstocks, and I carry a full-on purse.

Fortunately, I only took this external metamorphosis as far as cargo shorts & Chuck Taylors before I realized that trying to fit into other people’s stereotypes is the exact opposite of living authentically.

At first, this bothered me. I felt my look didn’t match my reality — and not just my “being gay” reality, but specifically that as a gay person, I no longer had the rights I’d taken for granted while living as “straight.” A lot had changed in just a few weeks and I wanted my external self to reflect & announce my authentic, gay-ass self to the world.

Fortunately, I only took this external metamorphosis as far as cargo shorts & Chuck Taylors before I realized that trying to fit into other people’s stereotypes is the exact opposite of living authentically.

When I first came out, my mother actually said to me, “You must be the girl of the relationship, since it takes you so long to get ready in the morning!” Like, she actually said this to me. I think I impatiently explained that, of course, we’re both girls, and that’s what makes it gay, and comments like that are offensive and ignorant.

The worst part of hearing my mother say something so stupid was that I’d always thought she was more smart and thoughtful about things like that so if she was that close-minded, what did that say for the rest of the world? It was like opening my eyes for the first time. She gets it now, but that was a rough first year.

I still want to stamp GAY on my forehead from time to time. Like a couple weeks ago when I let a van turn left into the line ahead of me while I was waiting to drop off my son at school, because I’m a super nice & curteous person, and I was then able to see the van’s bumper sticker: MARRIAGE = 1 MAN + 1 WOMAN. 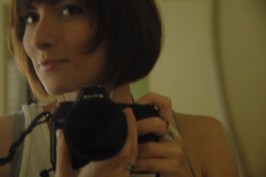 I wanted to jump out of my car and scream, “Lady! The super nice, courteous, tax-paying, law-abiding, hella cute person who just let you ahead of them in this line? IS GAY! So fuck you and fuck your bumper sticker!” It’s times like those that I wish my car was a mobile rainbow flag with a P.A. system blasting Melissa Etheridge, just so that bigot would know that a GIANT HOMO had done her a favor that day.

I think the only way to really make a difference — to change people’s minds and put an end to negative stereotyping — is to be yourself, while being as out as possible. If you feel like it, shock them with your alternative lifestyle haircut and lip piercing. Or, shock them with your long hair, perfectly applied eyeshadow, and smokin’ hot girlfriend. That’s what being out is about — being yourself, your big queer self. Stereotypes be damned. 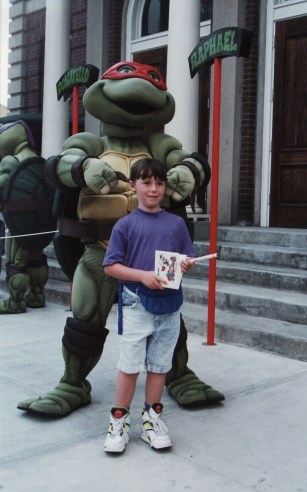 Most people assume I’m straight, which I find interesting because my wardrobe is not what most people would classify as feminine: jeans, t-shirts, collared shirts. I wear makeup maybe every other day (this is laziness rather than reluctance). My “fashion sense” is probs residue from the first 16 years of my life, when I dressed in boy’s clothing because, right or wrong, passing as a boy made me feel safer and stronger, like no-one could mess with me.

Passing as a boy made me feel safer and stronger, like no-one could mess with me.

Oh also, lately I’ve had a huge gay pride-looking rainbow running down the side of my converse – part of a hard-to-see Pink Floyd ‘Dark Side of the Moon’ decal. What I’m getting at is that I do get surprised when a dude makes a pass at me or someone asks if I have a boyfriend, ’cause I think if I were outside looking in then I’d assume I was not totally straight. But overall I’m not at all concerned about vibe I give off, in adulthood I’ve never deliberately dressed in a certain way to influence peoples’ assumptions. And I’m happy to correct people if they judge me incorrectly, it’s not something I find awkward or can’t move past. So that’s me.

As for other girls: Around Sydney right now I see a lot of straight girls who could be confused for gay girls who could even be confused for gay or straight boys. My straight friends are more frequently being mistaken for lesbians because they’ve cropped their hair or introduced vests into their wardrobes. And that’s cool, I think fashion is increasingly blurring the lines with regard to  gender and orientation and I like it. I personally appreciate that it’s becoming more and more difficult to look at a girl and guess her orientation – I find getting to know people is far more interesting when there’s more mystery and less room for assumptions. 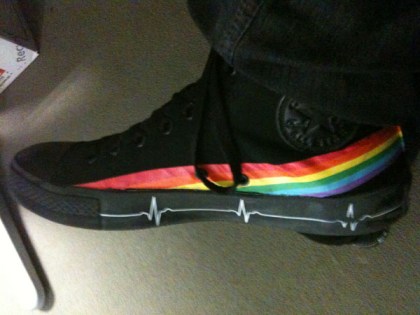 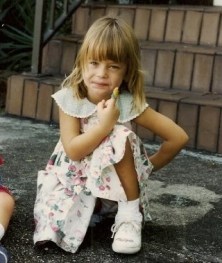 When I was fifteen my biggest problem with accepting my inherent gayness was that it somehow meant that I’d have to cut my hair off, buy comfortable shoes, and ultimately end up teaching P.E. at some clandestine high school in the middle of Wisconsin. I’ve blocked much of my middle and high school memories out of my mind so I cannot tell you why I thought this way, I just did. But the fact that I, an art school attendee who was raised by super liberal artsy/hippie parents, thought so narrow mindedly has to tell you something about our society’s portrayal of lady loving ladies. Right?

I’ve have one or two people in my life tell me that they knew I was gay just by looking at me, but for the most part I have always “passed” as straight. I’ve always preferred dresses to pants, lip-stick to chapstick, shopping to sports. Sometimes I think I’m attracted to women because I love being one just so damn much.

But, when passing that cute, trendy-in-the-alternative-lifestyle-kinda-way girl on the street, do I wish I could stop “passing” and start growing rainbows out of my ears, eyes, ass, all body parts possible? YES YES YES! But do I necessarily want those same rainbows present when talking distant family members? When scoring a free drink from an overly excited, clueless college boy?

I’ve always preferred dresses to pants, lip-stick to chapstick, shopping to sports. Sometimes I think I’m attracted to women because I love being one just so damn much.

Perhaps I am not lesbionically politically correct but sometimes I enjoy both privacy from my family and a free drink.

NEXT PAGE: Brooke and Katrina