Welcome to the latest installment of Style Thief, where I steal the clothes off queer style icons’ backs. Metaphorically, that is. I’ll try figure out just exactly what makes queer style icons tick by breaking down their look into itty bitty bite size pieces. I get a lot of questions about how to look like different celebrities/characters, so I’m finally tackling the question “How the hell do I dress like that?”

You might not know her name, but if you’ve ever spent any time following #menswear-for-women or #women-in-suits tags on tublr, you’ve probably already seen a picture of Esther Quek. Quek is the fashion editor of the classic menswear website The Rake and affiliated lifestyle magazine The Revolution, but really she’s known throughout the fashion world as the ultimate suit guru. I’ve always admired Quek’s commitment to breaking down boundaries and pulling together the most awesome street style. Quek is more than a queer style icon — she’s an everyone style icon. It’s no surprise then that plenty of readers have asked me to cover her here on Style Thief. I love you guys, so by popular demand, this week I’ll be stripping down Esther Quek. 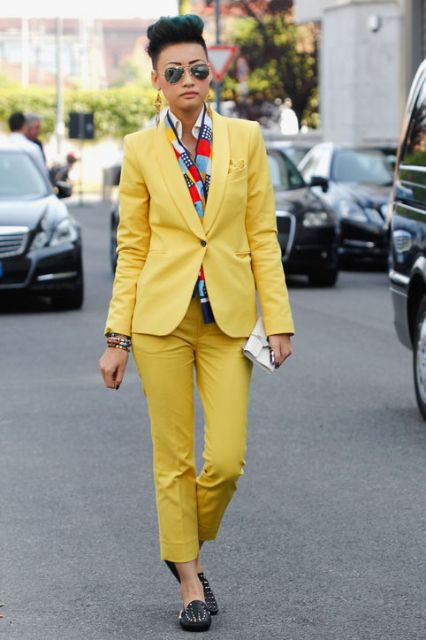 It’s often easy to get sucked into the idea that you have to always look a certain way. That’s where Esther Quek comes in and says that’s a bunch of BS and you can do whatever the hell you want. Quek’s style lives in that place where masculine meets feminine and mixes and swirls all together into awesome infinity. Her look is great for folks whose brainparts smiled the first day they heard the term “Tomboy Femme.” Her look is for the “butch is too butch but femme is too femme” crowd. Most of all, her look is for those of us just totally enamored by awesome cutting edge fashion. 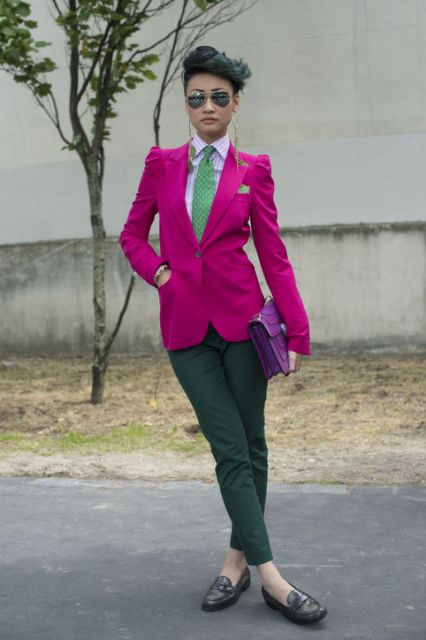 Quek is all about suits. I’m sure I could track down a picture here and there of her suitless, but a trouser and jacket are really what this woman is all about. For Quek, the suit is all about looking In Charge.  These are power suits. She’s the fucking boss.

Yes, we’ve seen suits before. We’ve even seen power suits before. Yet I’d argue that Quek really is bringing something totally new to the table. This isn’t Bette Porter‘s,  Brittney Griner‘s or Ellen DeGeneres‘s power suit. Those suits, while completely awesome and fresh, are in many ways updated versions of women’s suits. Those looks all take a women’s suit and butch it up into a suit those women are more comfortable wearing. Quek on the other hand starts with what she wants, a man’s suit, and then does whatever the hell she wants with it. 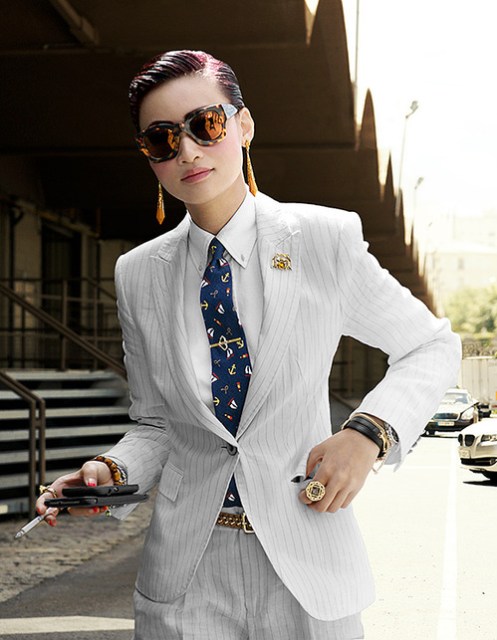 In this way,  Quek’s suits tend to be tailored versions of whatever is in style for men.  They’re strong in the shoulders, straight through the waist and narrow through the legs. Generally speaking her suits are cropped just above her ankles, in keeping with current women’s trends, and  taking a page out of Jenna Lyons’s book. She either goes for one button or a dapper double breasted look, staying on trend with the season’s men’s styles. Most importantly, Quek’s suits are impeccably cut. They fit her perfectly. 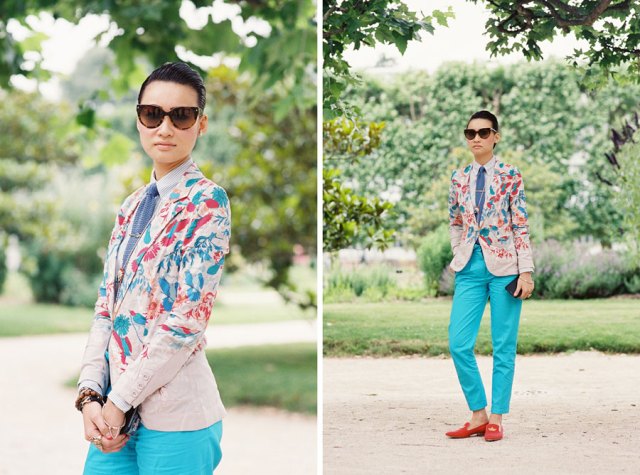 A secret part of my heart hopes that someday everyone can own a perfect made to measure suit. That’s maybe not that realistic. In the meantime check out our article on sizing a suit and remember that when you go to buy a suit you should make sure it fits the largest part of your body and then have the rest taken in. If you’re magical enough to find a suit that fits you really well, consider buying a second version of it. Much like true love, a great fitting suit does not come around every day.

Another way Quek blends masculine and feminine is by infusing her suits with bright colors. While bright colors aren’t inherently feminine, Quek plays with pinks and teals in a way rarely seen in men’s fashion. She might match a hot pink blazer with green pants or a floral blazer with teal pants. In many ways Quek’s bright colors not only infuse her more butch suits with a blast of classic femme, they also push that boundary on menswear. Once you see a look on Quek, it’s not so hard to imagine it on anyone. 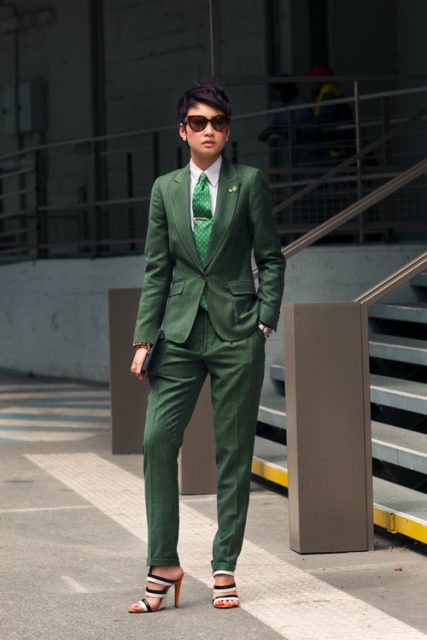 One of the best parts of Quek’s look is that she nearly always rocks at tie and pocket square. Even when she skips a tie she often keeps an adorable pocket square peeking out. Remember, you pocket tie should complement your tie but it shouldn’t match it exactly. It’s similar for the pattern on your shirt or the trim of your suit — everything should go together but none of the patterns should match exactly. 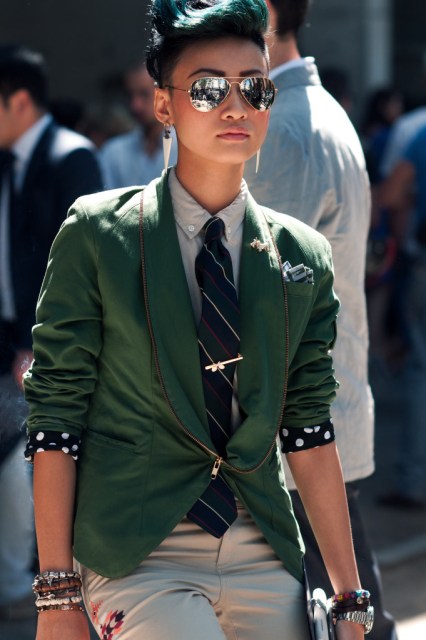 Quek’s look is completely cohesive from top to bottom — and I do mean all the way to the bottom. Her shoes are varied, bright and all over the gender presentation spectrum. She’s just as likely to be wearing brown loafers as she is black studded oxfords as she is crazy high pumps. No matter what she chooses, she’s meticulous in the degree to which she ensures that the colors and patterns of her shoes play off of her suit or shirt creating a cohesive overall look. Sometimes she matches the trim of her pumps to the pattern in her shirt, and other times she picks a dark solid loafer that brings a softness to an otherwise bright look. 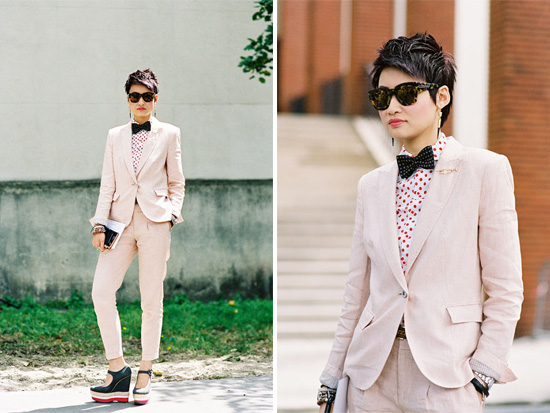 Quek loves her accessories. She often incorporates traditionally feminine accessories in with her more masculine cut suits. Sure, she’s wearing a tie clip and a men’s watch, but she’s also wearing long dangling earrings and a dozen bracelets. Maybe she’s skipped wearing a tie and is instead wearing a huge statement necklace. Similar to ties and pocket squares, your jewelry should be cohesive but not matchy-matchy. This edgy look skips the typical earring and necklace set.

Even Quek’s sunglasses, which she is rarely seen without, correspond with her jewelry.  In a sense her sunglasses really are jewelry. She might pair gold accented Ray Bans with a gold necklace, or tortoise shell shades with brown beaded bracelets. 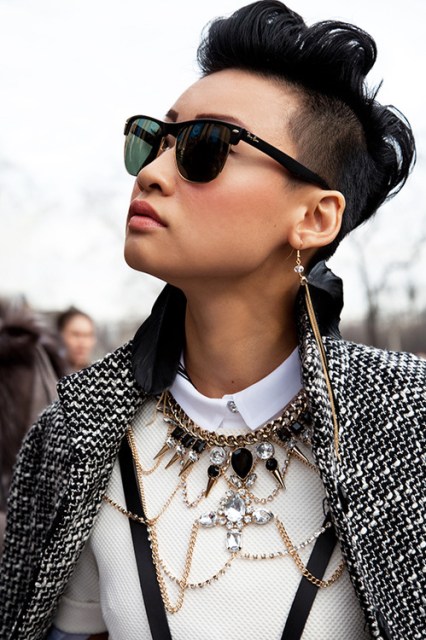 Esther Quek reminds us that there is no “right” way to do mens fashion. You need not attempt to follow every rule of men’s fashion and eschew every girly detail you might like. You need not even decide you are exactly This Butch and must dress a certain way every day. Fashion is fun, queer fashion is even better, but Quek reminds us that the rules we created yesterday are still the ones we’re allowed to break, mix, alter and remake tomorrow.

BRB. Busy looking awesome and starting a revolution.
(Via VanessaJackman.blogspot.com)