Welcome to the thirteeth installment of Style Thief, where I steal the clothes off queer style icons’ backs. Metaphorically, that is. I’ll try figure out just exactly what makes queer style icons tick by breaking down their look into itty bitty bite size pieces. I get a lot of questions about how to look like different celebrities/characters, so I’m finally tackling the question “How the hell do I dress like that?”

I’m not going to lie to you, I don’t know a thing about Brittney Griner’s basketball career. I mean I guess I know that she had 18 slam dunks last year and was the 2013 WNBA first draft pick, but only because we reported on it. Let’s just say, when it comes to Griner, I have my mind on other things. While most people are thinking about this:

I’m thinking about this: 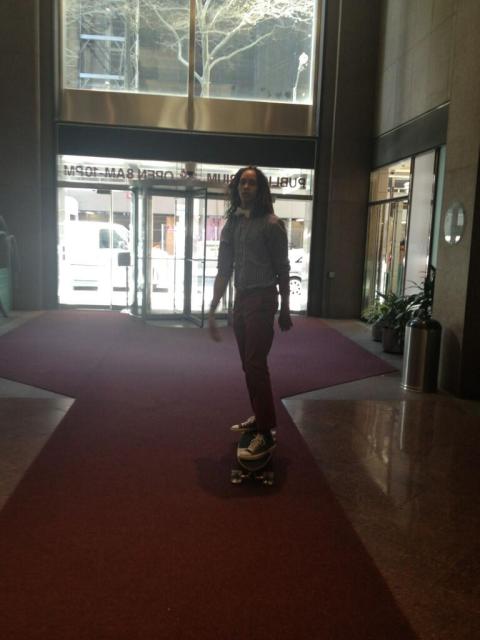 Yup, I’m focused on how she’s 6’8″ and I’m 5’4″ so if I wore 4″ heels she would be a foot taller than me which, as far as I’m concerned, would look perfect in our photographs together at black tie galas. And boy does she rock dapper formalwear to perfection. She has one of the best bow tie and sweater collections around. She even booked a contract with Nike! That’s why today I’m stripping down Brittney Griner so that all you tall, muscular, lanky, MOC dapper-as-hell queers out there can steal her look.

Griner’s red carpet/award show/WNBA draft style is one part men’s business suit, one part women’s pantsuit and one part classic lesbian chic. She takes the classic Bette Porter Power Suit and pulls it straight out of the nineties. 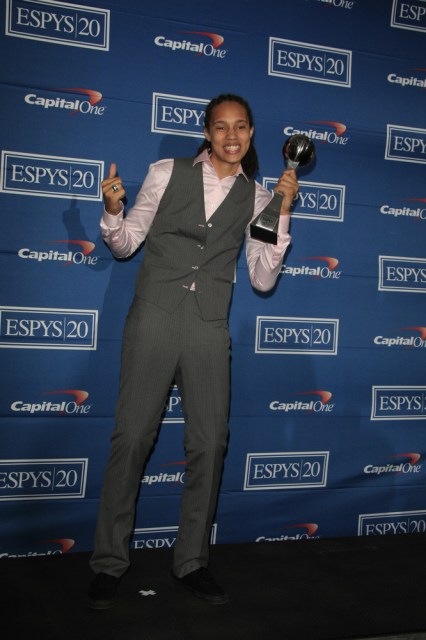 At the ESPYs (ESPN awards) Griner rocked a charcoal grey suit vest and matching pants along with a pink collared shirt and sneakers. While these basic pieces could be more femme, because Griner opts for a less form fitting vest and pants cut, the overall impression is more androgynous. However, Griner still picks up essence of Bette Porter with her pink button-up with a splayed out collar.

Even Griner’s choice to pair her suit with sneakers is a classic lesbian move– think Ellen Degeneres or Justin Bieber. It’s a particularly great idea for anyone who wants avoid the hassle of finding mens shoes in small sizes or avoid the “butch vs femme” shoe debates completely. In Griner’s case, however, I suspect this is more of a style choice than anything else. Sneakers give off a friendly, laid-back vibe that softens the look of a pantsuit and takes it out of the boardroom. Of course, Griner is a professional basketball player and skateboarder, and sneakers are well within her wheelhouse. In this way her sneakers take her dapper style and give them a bit of athletic/skater edge.

While the look come with plenty of benefits, sneakers accompanying a suit should be chosen carefully. Dunks and padded skate shoes can look clunky, particularly if you are on the skinnier side. Additionally, if you’re at a formal dress code event, you host might not appreciate your loudest kicks. Instead, opt for a solid colored pair of narrow canvas shoes. Converse and Vans are both good options. Additionally, make sure you sneakers are clean and in good shape. Griner’s look is about being relaxed, not messy.

Griner’s ultimate powersuit, however, is the off-white suit she wore when she received her Phoenix Mercury jersey as the number one draft pick. Her suit immediately grabbed my attention because, undying love aside, it’s one of the most perfect MOC wedding looks I’ve ever seen. While reminiscent of Ellen Degeneres, it had a younger, updated feel. 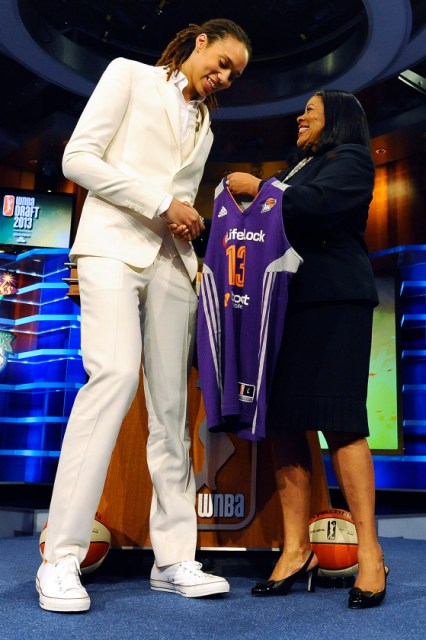 White suits can often be jarring. We tend to think of white as a “neutral” tone, but in reality it is one of the brightest colors on the wheel. Griner’s off-white suit choice not only complements her skin tone, but also cuts down on that bright white glare while still having the formal and striking appearance of a white suit.

One of the most important aspects of wearing a white suit, or any suit for that matter, is the tailoring. White isn’t always the most forgiving color, and you want to make sure any white suit is perfectly tailored. The cut of Griner’s suit is particularly flattering if you are more center-of-center leaning, as it has the wide shoulders and boxy structure of a more masculine suit, but skinnier notched lapels.

While I have you here, think carefully about your underwear when wearing white pants. I don’t know what kind of underwear Brittney Griner wears (she’s never told me) but this is one of those moments to try on every pair of boxer-briefs (or thongs, or boishorts, or whatever) in every possible lighting. Underwear lines do not look fresh on anyone. 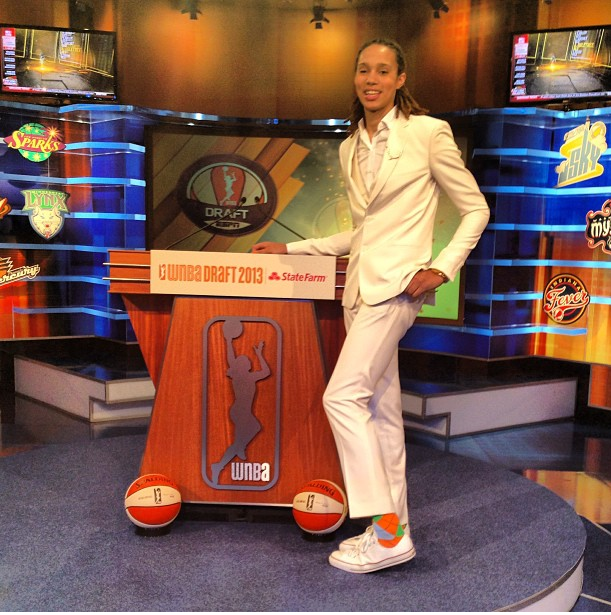 Griner pairs her off-white suit with a stark white shirt and stark white sneakers. While folks tend to shy away from matching off-white with stark white, the two actually complement each other nicely. This is not like clashing your shades of black. Still, to prevent herself from becoming a snowman, Griner adds a couple of pops of orange (one of the Mercury’s colors) in the piping of her sneakers and in her argyle socks.

One of the cutest things about Griner’s suit was that she was able to re-wear components of it in a whole new way. She dropped the jacket and added a plaid bowtie for a less professional but just as dapper effect at the 2013 GLAAD awards. 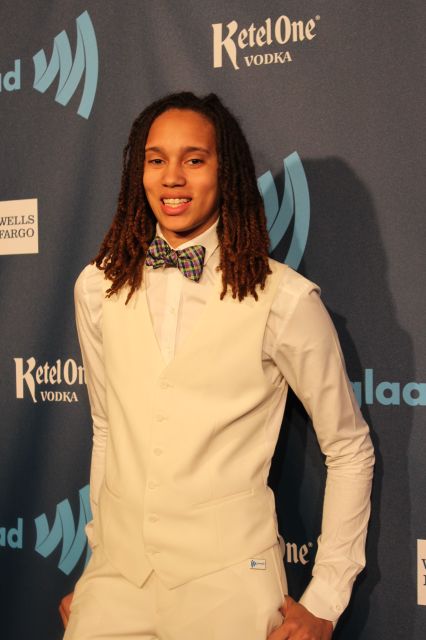 AT THE LA GLAAD AWARDS 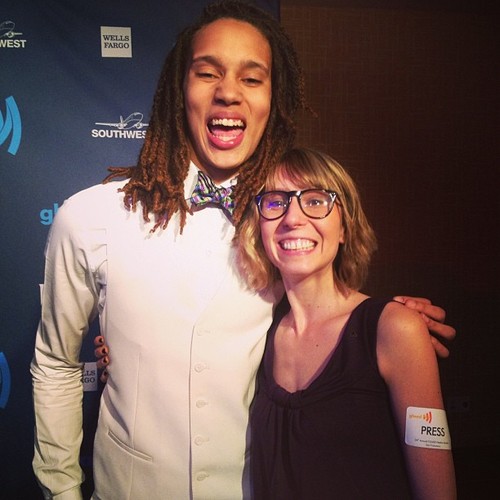 JUST LOOK HOW GOOD SHE LOOKS WITH THIS WEIRDO! JUST IMAGINE GOOD SHE’D LOOK NEXT TO ME!

When Griner needs to be slightly more casual, say for an interview or first date where we go out for vegan hibachi (seriously Brittney, call me), she keeps up that dapper attitude and always seems to rock a bow tie. Her collection is flawless. While I would never tell you to skip out on buying the must-have lesbian bow tie basics– black satin, pink paisley, rainbow– Griner’s bow tie collection is fun, modern and hip. She embraces plaids, polka dots and stripes but stops herself before fun becomes comical. 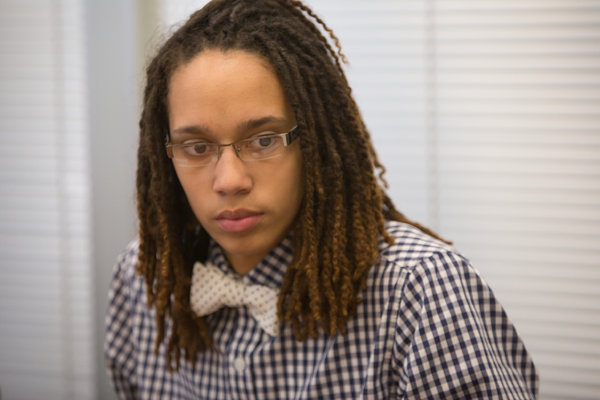 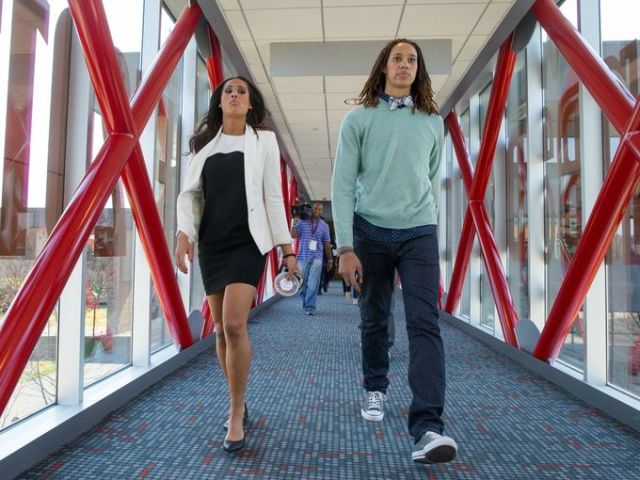 Normally I suggest you tuck in your shirt whenever you wear a bow tie, but Griner is able to pull off her look untucked. As Griner is often already rocking sneakers, her untucked shirt emphasizes this laid back dapper style. This is particularly cohesive when she tops her outfit with a comfortable, loose sweater. 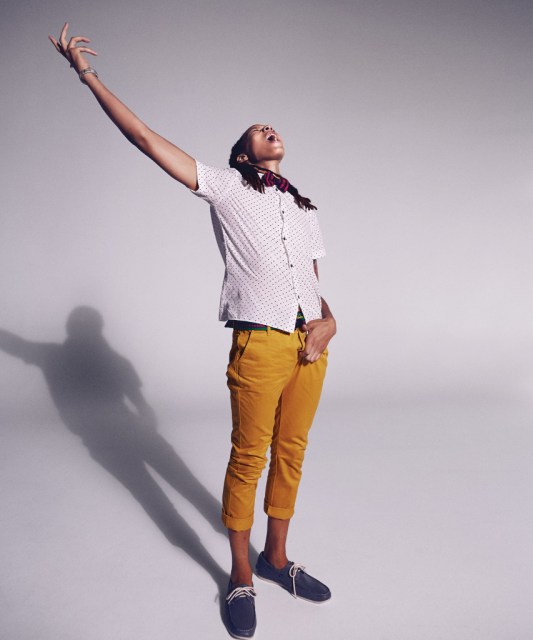 Keep in mind that if you pair a bow tie with an untucked shirt you instantly need to think more about the cut of the shirt. If the shirt is too large or billowy it will appear sloppy or ill-fitting once you have a tie on. The same applies if the shirt is too long. With that in mind, pick a shirt that is a narrow fit (usually billed as “european cut” or “slim-fit”) that is slightly shorter than a shirt you normally buy to tuck in. Although you want a shirt that’s narrow you should shy away from curvy-fit women’s shirt, as these tend to look a bit eight-grade orchestra concert when worn with a bow tie. One great option is to opt for a shirt with a square cut bottom– these shirts are designed to be worn untucked and may present the fewest obstacles towards a great fit.

Brittney Griner is not one to be boxed in, and these are certainly not the only styles she rocks. She’s also known for her bright skate shoes, bicep-hugging tees and completely awesome tattoos. As her style evolves and we see more from this amazing woman I imagine we might just have to do a Style Thief Part Two. One thing is for sure, between her dunks on the court, Nike contract and fresh look, Brittney Griner is well on her way to becoming a lesbian icon. Style or otherwise.