When the original L Word launched, “which of these actresses are gay in real life” was a common question asked of the cast members at press junkets and interviews. It was a different time, then. Leisha Hailey was the only out lesbian in the main cast. Kate Moennig was also a lesbian but it wasn’t okay yet to say so, at least not anywhere important or public or in print. Karina Lombard, Mia Kirshner and Laurel Holloman had all hinted at or embraced the bisexual label at some point, but both Laurel and Karina have since redacted the identification. Karina’s statement hurt the most, perhaps, as she indicated that being on the show was what convinced her she wasn’t bisexual anymore. Laurel, who’d identified that way after having an experience with another woman following her part in The Incredibly True Adventures of 2 Girls In Love, eventually came to feel that that relationship was a one-off and it wasn’t right for her to continue identifying as bisexual.

The L Word: Generation Q, however, is a VERY gay cast. So we’ll get through the first series and then move gayly onto the second!

Here are the original L Word veterans who are now publicly gay, lesbian, queer or bisexual:

The only out lesbian playing a main character when the show premiered, Leisha Hailey had been a musician and an actress for a decade, and famously once dated worldwide lesbian heartthrob kd Lang. While on The L Word, Hailey was dating Nina Garduno of Free City, which’s how the show scored so much Free City apparel for characters who definitely couldn’t truly afford $150 t-shirts. Mid-series, she formed the band Uh Huh Her with Camila Grey, who was then dating Clea Duvall. Then Hailey and Grey dated!

Moennig is Gwyneth Paltrow’s cousin and has been playing queer and trans roles on television and in the movies since her first big break getting the part of Jake Pratt on Young Americans. Moennig figured out and embraced that she was gay while appearing in The L Word as Shane. For a while, her sexual orientation was basically an “open secret.” After The L Word she dated Holly Miranda for a while, has been an ambassador for Wildfang and possibly dated Evan Rachel Wood. She has been married to Ana Rezende since 2017.

Loken was well-known amongst shameless lesbian gossip hounds (read: me) as the ex-girlfriend of Michelle Rodriguez and ex-kisser of Pink. Loken came out as bisexual in Curve Magazine in 2006 and showed up on The L Word shortly thereafter. She has since had relationships with both men and women and gave birth to a son with her boyfriend Jonathan Bates in 2016.

With her first husband, with then-girlfriend Linda Perry, with her now-husband

Just as The L Word was ending, Clementine Ford appeared on the cover of DIVA magazine in a “coming out” interview that Ford immediately claimed did not actually happen, although she soon thereafter told The Advocate that she was gay, but wanted there not to be “this big emphasis on it.” She also denied rumors from DIVA Magazine that she’d had an affair with Kate Moennig, her on-screen love interest. She dated Linda Perry from 2009-2011, and married actor Cyrus Wilcox in April 2013.

Daniela Sea is an incredible human who remains an activist and a DJ, doing indie projects and being cute. They were out when they began the show, and told Drew in 2021 “I think the word I’d use for myself today is something like pansexual. I had sexual experiences with all different genders growing up. ” 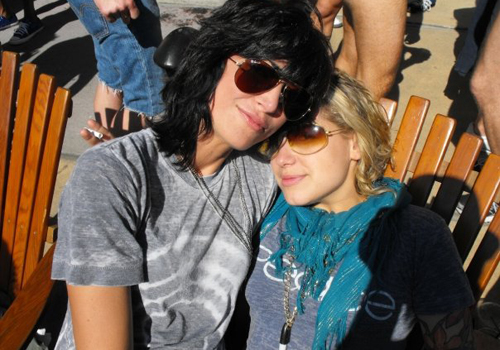 Keener was one of those up-and-coming actresses in TLW who was pretty clearly living the life of a gay lady but not ready to say so. AND THEN. “Gay Pride Weekend had such a buoying effect on Keener that the actress stepped out in public not one, not two, but three times, with rumored new lady love Jackie Warner of Bravo’s Work Out,” wrote Gawker in 2008. 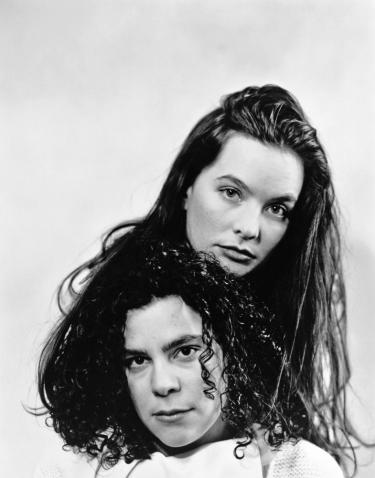 Turner was part of the general social web that wrote and produced The L Word, having worked on films like Go Fish with people like her ex-girlfriend, co-executive producer Rose Troche. She was one of a handful of out actresses who appeared on the show because you cannot make the first american lesbian TV show ever without giving Guienevere Turner a part. She also wrote three episodes. 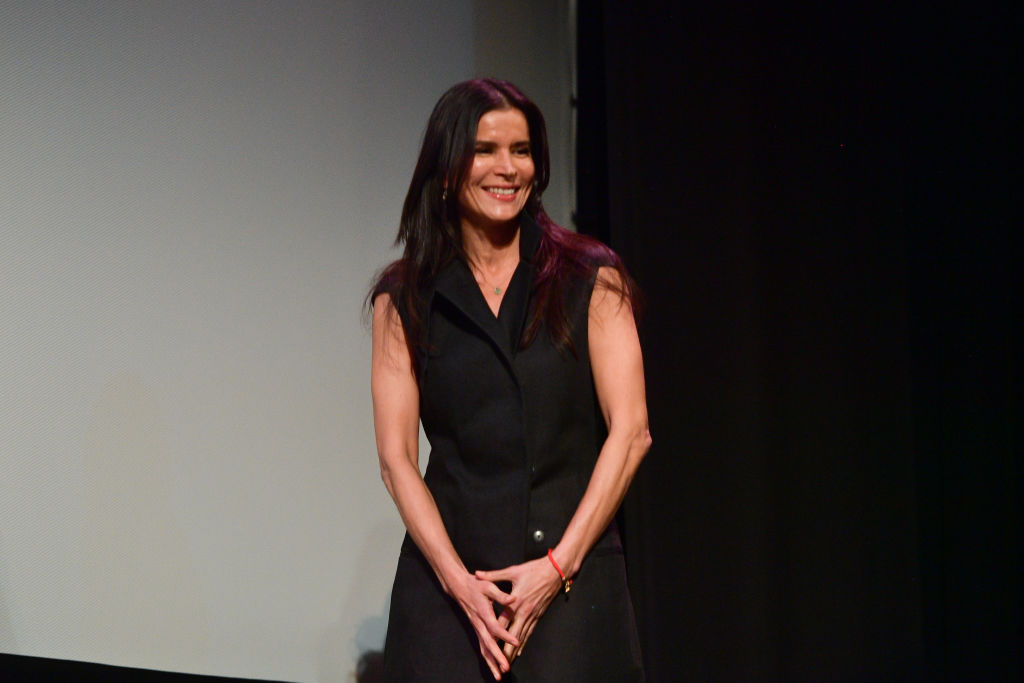 Velasquez had a bit role as the actress playing Marina in Lez Girls, but remained deeply closeted until 2015, when she came out and released a memoir about her life, including details of her relationship with Sandra Bernhard. 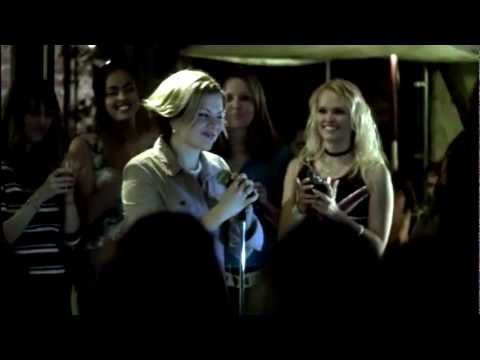 Ali Liebert in “The L Word”

Liebert was one of many Canadian actresses who played tiny roles with zero lines because The L Word shot in Vancouver. She went public about her relationship with her girlfriend in 2015. 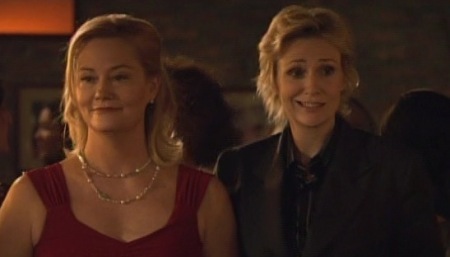 Jane Lynch on “The L Word”

As a character actress, Lynch never felt the need to come out, but has been living an openly lesbian life for all of her career. Her career has taken off since The L Word, and she also got married and then divorced. Also, she can do no wrong. 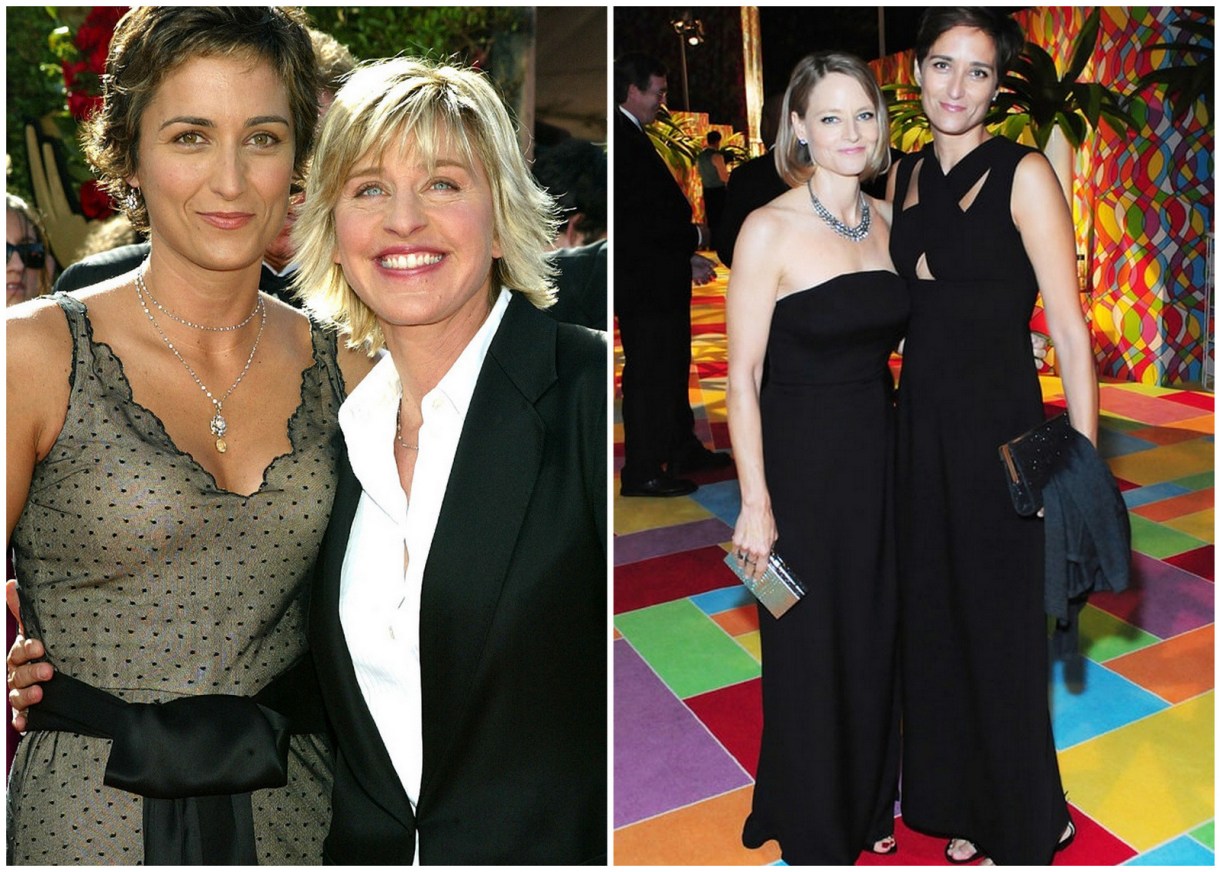 Hedison was the noteworthy ex-girlfriend of Ellen DeGeneres and a successful photographer when she joined the cast as Helena Peabody’s love interest Dylan in Season Three. She scored big in the Lesbian Mate Bingo in 2014, marrying Jodie Foster. 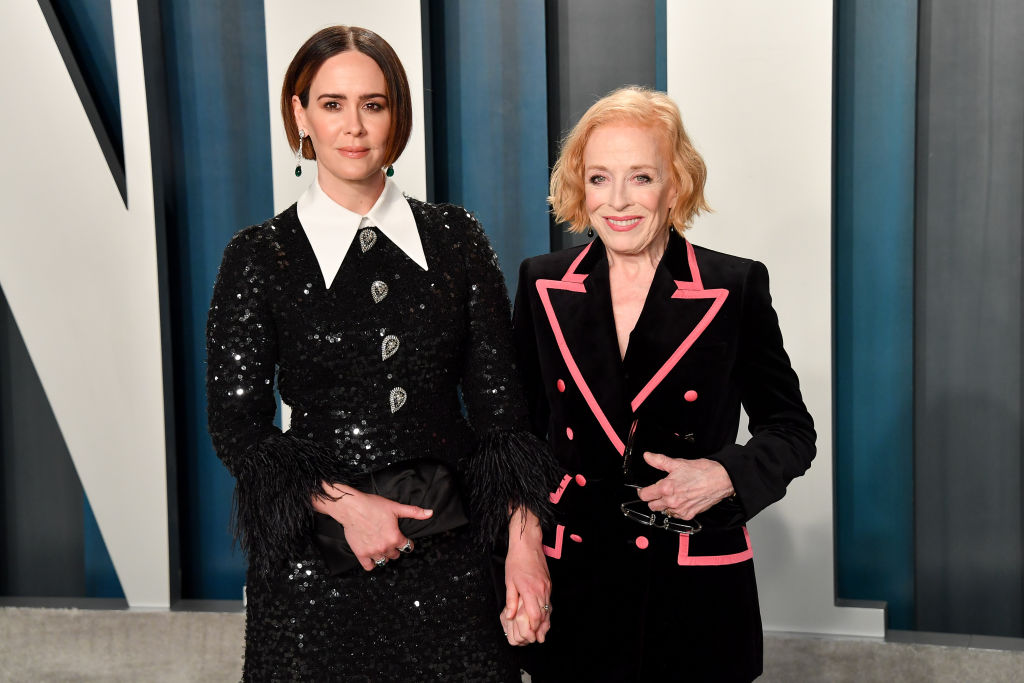 It was a gift from the great lesbian beyond when we learned in 2016 that our dearest most treasured Sarah Paulson and our dearest most treasured Holland Taylor were madly in love and not afraid to say so. That was the day I started writing this post, which I then abandoned, and then re-engaged with because we have no content for today! Fun story: the first time I became aware of Sarah Paulson’s existence was when I saw a reading of a play about making The L Word, written by Susan Miller, in which Sarah Paulson appeared. So did Kate Moennig. Now, here we are. 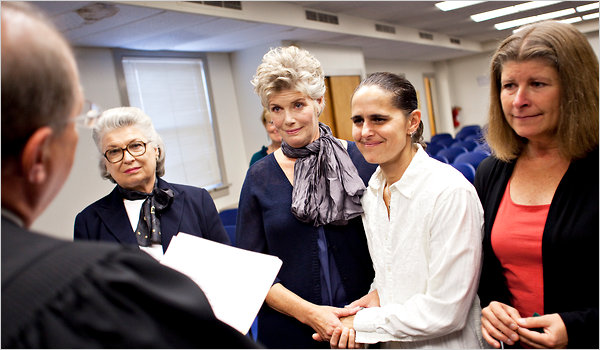 McGillis played a closeted Colonel trying to kick Tasha out of the military in Season Five of The L Word. McGillis herself remained in the closet until a few months after TLW wrapped up, coming out as a lesbian in May of 2009. 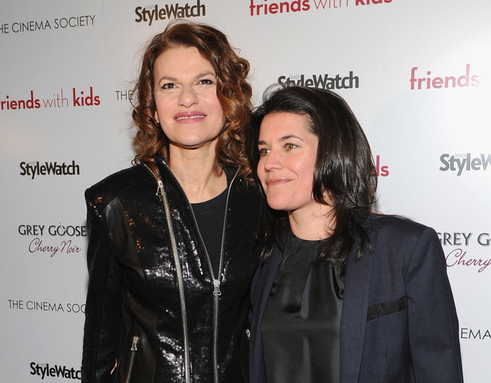 Bernhard has been an out bisexual comedian for many years, going back to her rumored romance with Madonna in the ’90s, which is one of my favorite things to ever happen. 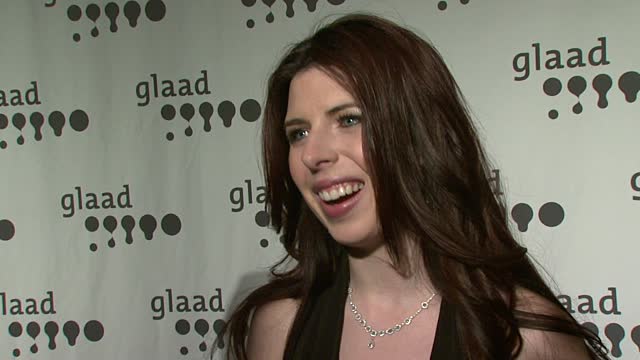 Heather Matarazzo came out discretely in 2004, and began a guest role of Stacy Merkin on The L Word in 2007. She began dating musician Caroline Murphy in 2007 and the two broke up in 2012. She also played gay in the short-lived Logo series Exes and Ohs. She married Heather Truman in 2018.

Melissa Etheridge’s ex-girlfriend‘s acting career never fully took off, but she had a very memorable turn as Lacey, Shane’s insane stalker, in The L Word.

Melone, who eventually became a spokeswoman for lesbian vacation company Sweet, crashed the set of Lez Girls with Dawn Denbo in Season Five.

Rijker is a world-famous kickboxer known as “the most dangerous woman in the world” who appeared twice on the show, once as Dana’s trainer and again as Helena’s jailhouse lover Dusty. She was actually Ilene Chaiken’s personal trainer at one time, and the two were working together on a project about female athletes. In 2008, she told Curve Magazine that she doesn’t put a label on her sexuality. 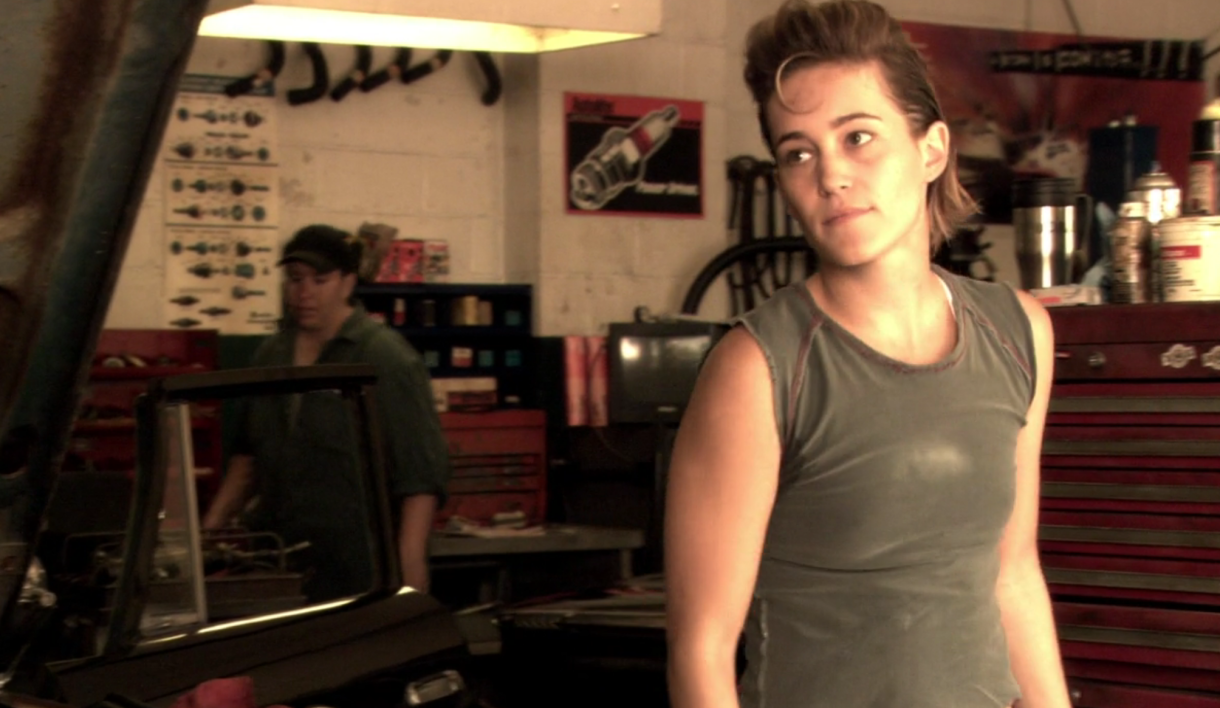 Peterson, another Canadian actress, is bisexual. She played two bit parts on The L Word, including Dax, an employee of Ivan’s garage. 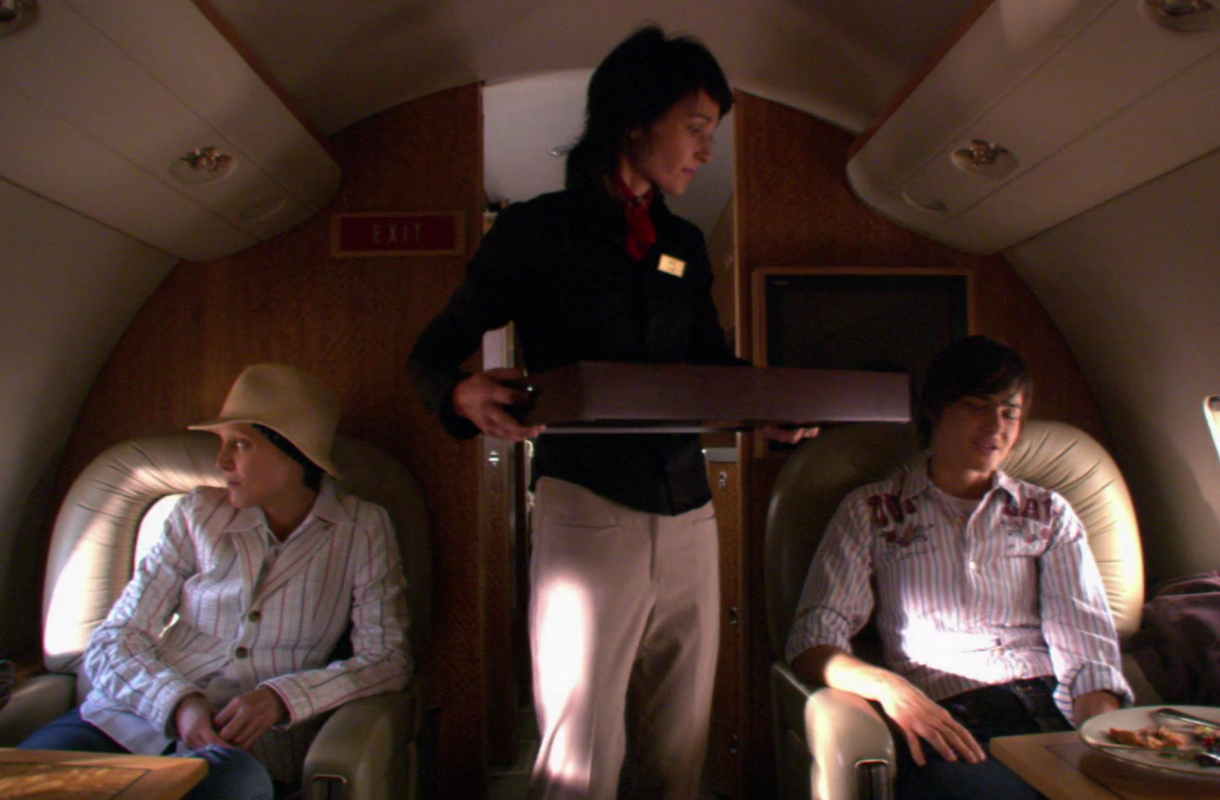 What a role! What a time to be alive!

L Word: Generation Q: Who is Out as Lesbian or Bisexual

The L Word: Generation Q made efforts to employ queer actors for the main roles, although not all the actors on the show have ever spoken publicly about their sexual orientations. But some have! 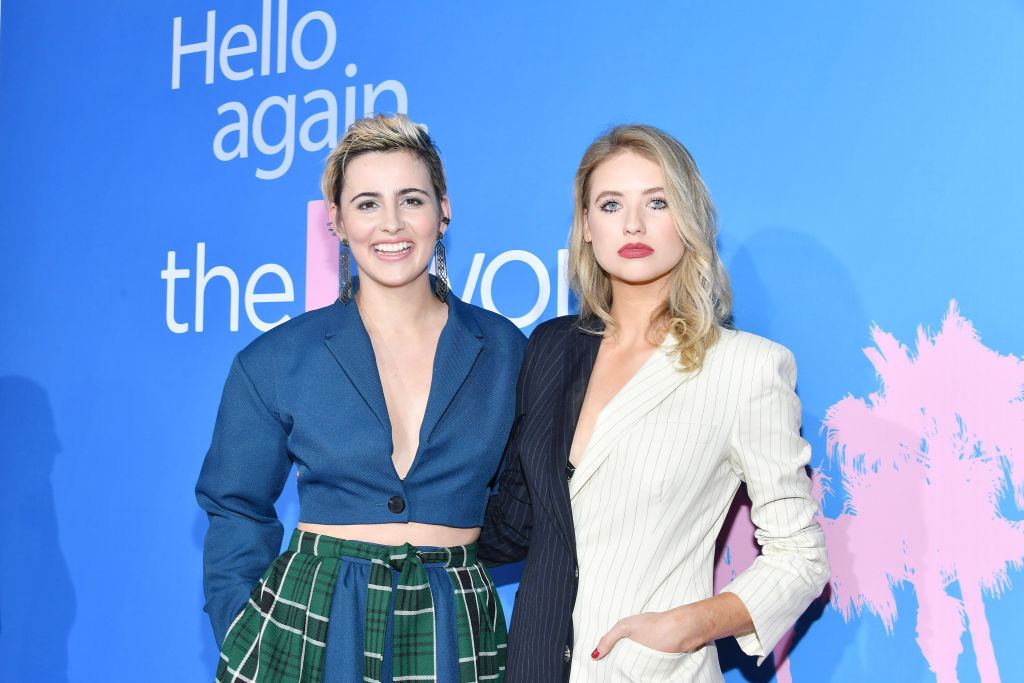 The only out girl in Toboni’s high school gave her The L Word box set on DVD and told her to “figure it out.” Eventually, she did! She’s now happily in a relationship with model Kassandra Clementi. 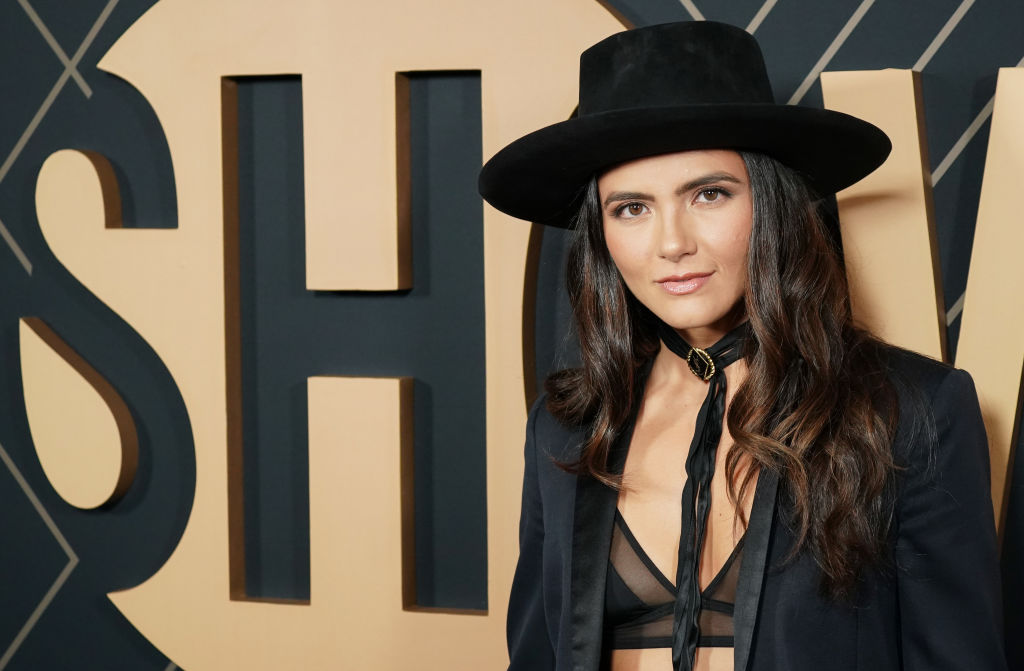 Of her sexuality, Mandi has said, “if there were to be anything close to what I feel, it would be pan. I accept love in all forms and I give love. It’s just all love.” 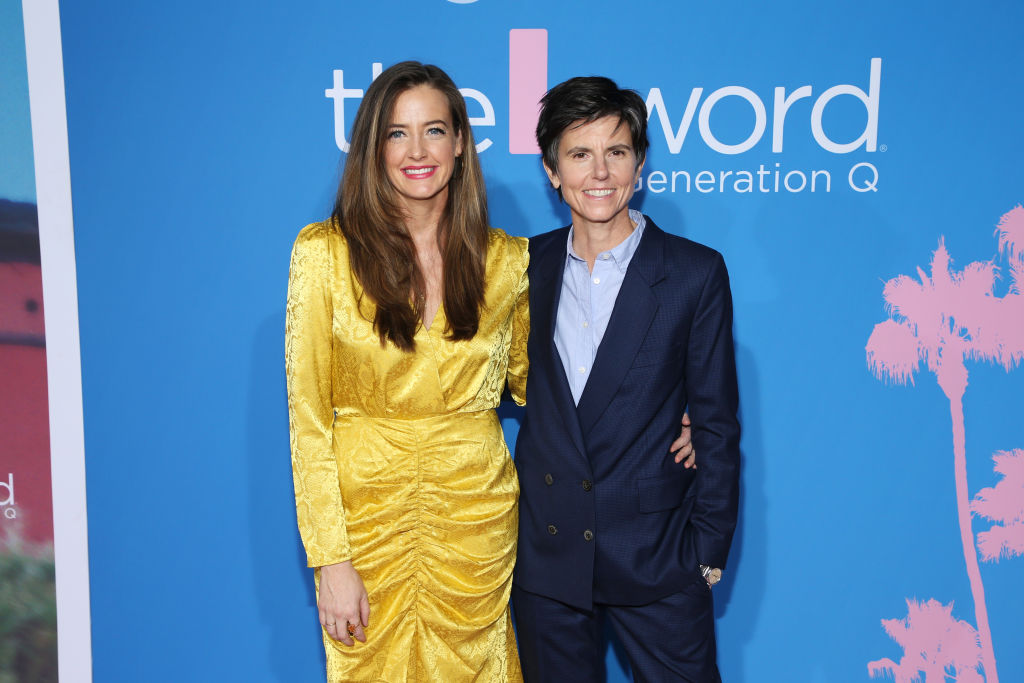 Allynne met her now-wife Tig Notaro on the set of In a World. Prior to meeting Tig, she’d never dated women, but according to Allyne, “I was so into Tig and I was falling in love with her and I didn’t know how to identify it because I thought I was straight.” 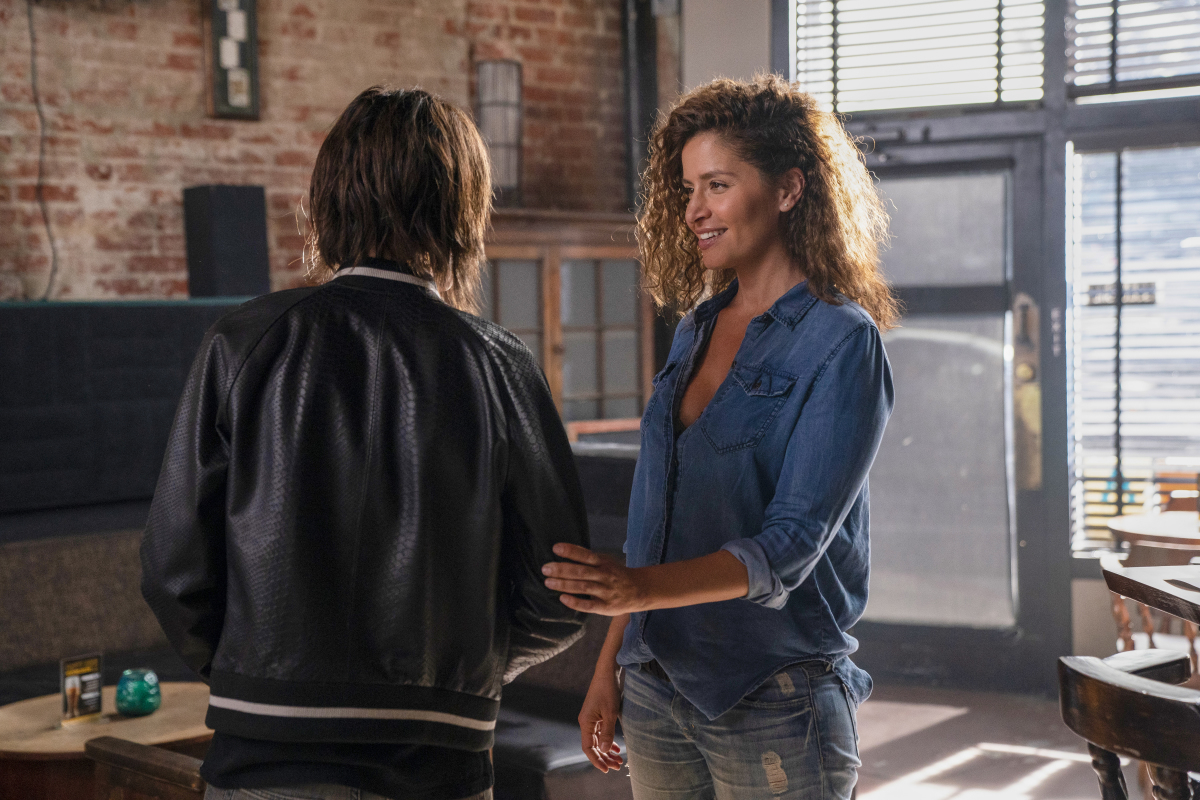 After Season 1 of Generation Q premiered, Mason came out on Instagram, telling her followeres “Usually I’m pretty private about my private life but its’ important for me to discuss my bisexuality because I grew up always being told it was a ‘phase.'” 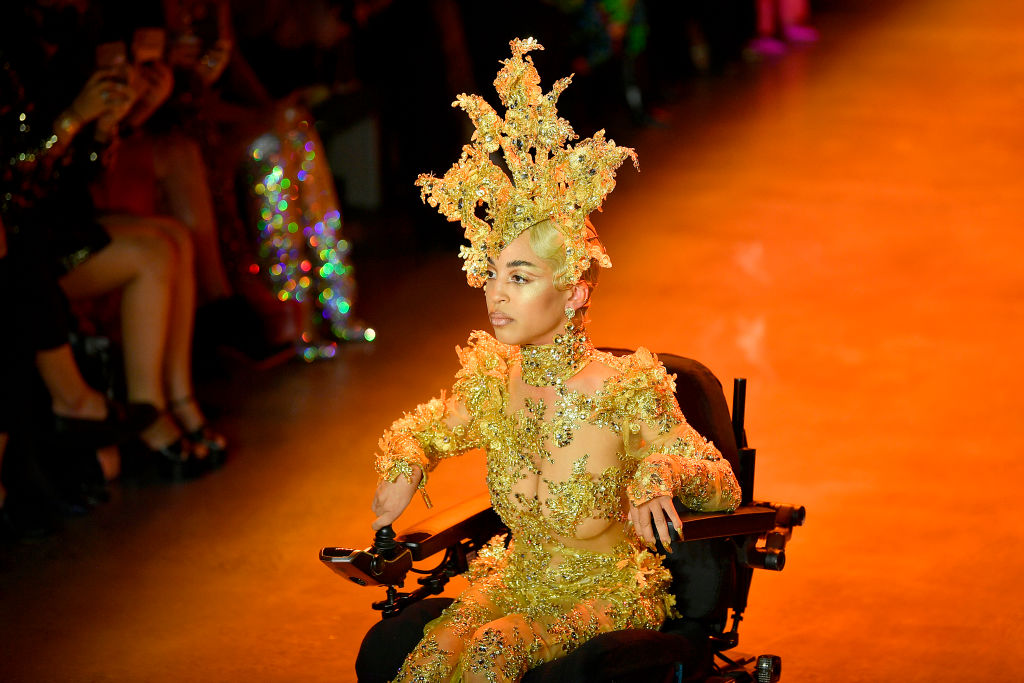 NEW YORK, NEW YORK – FEBRUARY 09: Jillian Mercado walks the runway for The Blonds during New York Fashion Week: The Shows at Gallery I at Spring Studios on February 09, 2020 in New York City. (Photo by Roy Rochlin/Getty Images for NYFW: The Shows)

Following the premiere of Generation Q, Mercado said on her instagram, ““I am proud to say that I’ve done so many great things for the disability community (there is so much more to be done done tho). Over the course of this year I had the absolute honor to know people from all communities that make me me. That being a woman, having a disability, being Dominican, and finally I can add to that magical layer being queer.” 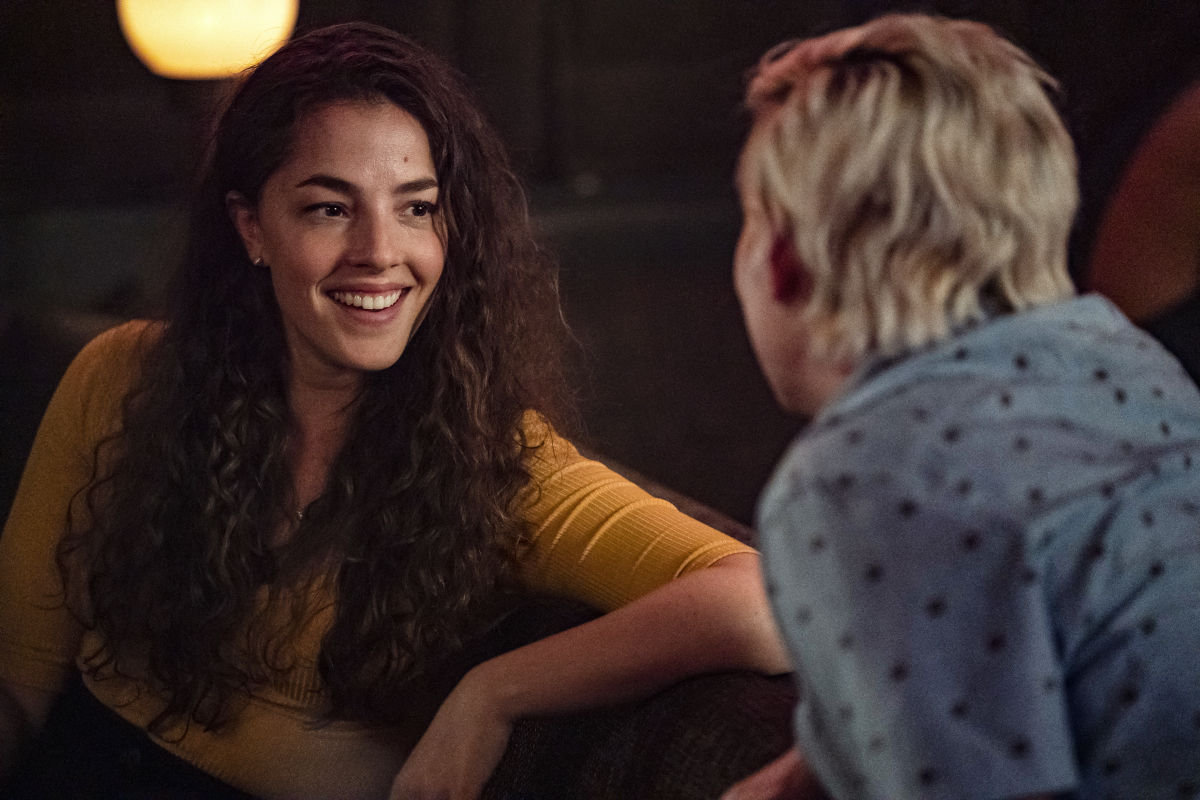 When she participated in the self evident photo project in 2011, she said she was honored to be a part of it because “it’s a way of me showing gratitude that I live surrounded by a community in which I don’t have to hide their sexual orientation…. and I am not one hundred percent straight.” 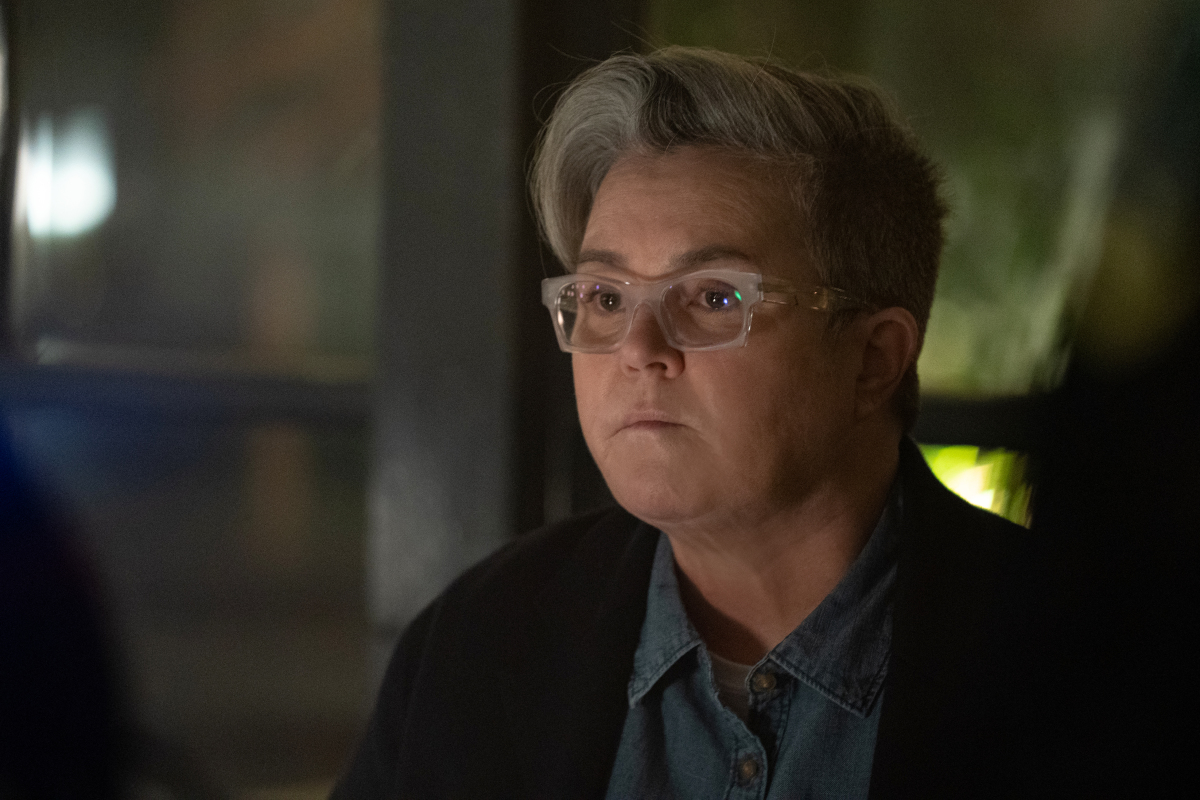 LEGEND ROSIE O’DONNELL Y’ALL ALREADY KNOW ALL ABOUT HER SHE IS GAY AND SHE IS CARRIE, TINA’S WIFE. TRANSCENDENT.