This past May, Gothip Girl reported that newly single Evan Rachel Wood was prowling Los Angeles ladies’ nights, potentially in search of new paramour situations. It could have been you, dear reader, but it looks like you may have missed your chance. Today, Page Six reports that Ms. Wood may have landed the great white whale of this great queer ocean: Kate Moennig, aka The L Word‘s Shane McCutcheon.

Take a minute, catch your breath, and let’s review the facts.

In February 2013 (long before Evan Rachel Wood Bisexual’s separation from husband Jamie Bell was public knowledge, or perhaps even a thing), Ms. Wood encountered Ms. Moennig at a flea market. Maybe their hands brushed against each other as they both reached for the same box of dusty cassette tapes. Maybe their eyes met across a table full of handmade bangle bracelets. Regardless of the circumstances, what is known for certain is that Evan Rachel Wood did the only thing a red-blooded American can do in the presence of Kate Moennig, and she blushed, got flustered, bolted and then tweeted about it like a total nerd.

@evanrachelwood you should have said hi. :)

This happened to me once with Samantha Ronson and I died, so.

From what we can discern, the two struck up some sort of Twitter-based relationship, and Wood continued to moon over the spindly seductress, even tweeting about dreaming about the two falling asleep together in a cab during NYC pride. You have probably also periodically tweeted about Kate Moennig-based fantasies, but you, dear reader, you aren’t Evan Rachel Wood.

Although Kate Moennig was most recently reported to be in some sort of relationship-esque arrangement with mysterious hat aficionado Holly Miranda, noted Instagram behavioural analyst Crystal Silvester reports that “…Holly Miranda has not posted a photo of Kate Moennig’s dog for at least three months now, which indicates either nothing or everything re: their relationship status.”

At the Hammer Museum’s Los Angeles gala (honoring artist Mark Bradford and singer Joni Mitchell) this past Saturday night, Wood and Moennig arrived holding hands, both nattily dressed in blazers, appearing “very much a couple.” Page Six’s source also notes that the two “kept close all night” and spent time at a “secluded table,” which (as we all know) constitute the two primary girl-on-girl sex acts. Although the two were not specifically reported to be “canoodling,” it is heavily implied that this was the case.

The two were not photographed together, but here is a composite image we have put together from photos from the event. Our resident body language expert Stef Schwartz notes, “these two are all about it.” Evan Rachel Wood looks resplendent, even glowing, and as always, Moennig’s hair remains full of secrets. 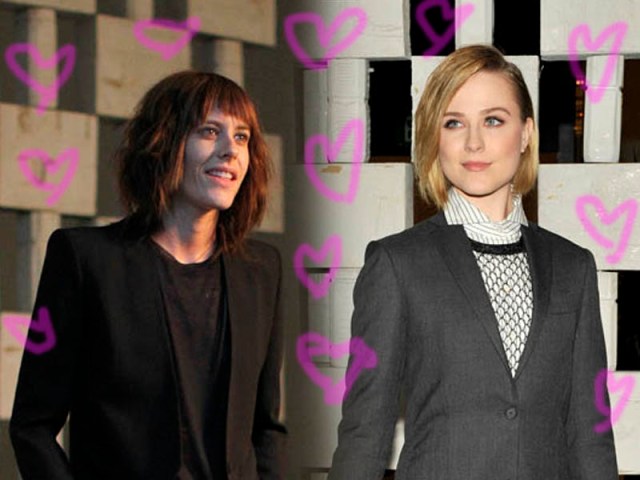 At press time, neither Kate Moennig’s three-legged chihuahua nor her haircut could be reached for comment.