Rumors about the former relationship between Venezuelan model and actress Patricia Velásquez and comedian Sandra Bernhard have existed for decades now, fueled partially by Bernhard’s own admission. The two were said to have met at a fashion show in Paris in the early 90s. According to The Scottish Daily Record, Sandra asked Patricia to meet her in her hotel that afternoon, and she came over 45 minutes later with pastries, ready to make out. Now, in her new memoir, Straight Walk, coming out February 10th, Velásquez confirms that relationship and her lesbian identity, revealing that Sandra Bernhard was actually the first girl she kissed. “I was deeply in love with Sandra,” she wrote in her book, “in a way I’d never experienced before.”

It’s a major revelation from the legendary Velásquez, who is considered by many to be the world’ “First Latina Supermodel” — she’s been in several Sports Illustrated Swimsuit Editions, appeared on the cover of Vogue, walked the runway for Gucci and Dolce & Gabbana, been featured in campaigns for Cover Girl and Pantene, just for starters. She’s perhaps best known for her role as Anck-Su-Namun in The Mummy and The Mummy Returns, but you may recognize her from Arrested Development (she was the second actress to play Colombian soap opera star Marta Estrella) and The L Word (she played Begoña, the actress playing Marina/Karina in Lez Girls). 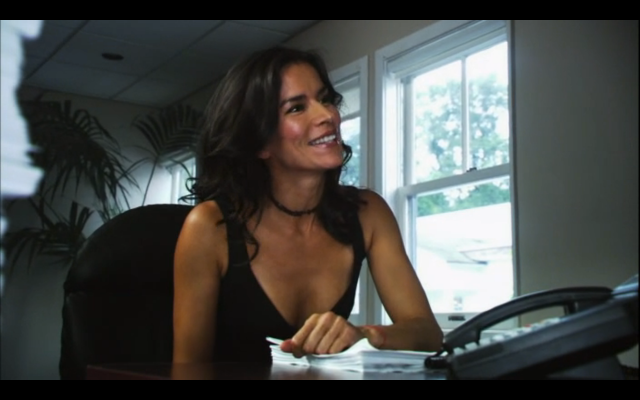 Velásquez grew up in poverty in a village with no running water and a mother who struggled to feed her six children, willing to sacrifice anything for their success and happiness. Her mother is a member of the Indigenous Wayúu people and her father is Mestizo. As a teenager, Velásquez was urged by a hairdresser friend to go into modeling. She went on a diet of chicken and tomato juice in order to compete in the 1989 Miss Venezuela pageant, in which she placed second. After three years of college, she moved to Milan and began her modeling career.

She’s also a mother and an award-winning activist and humanitarian. She’s the founder of the Wayúu Taya Foundation, a nonprofit organization dedicated to “educating the public and funding ways to improve conditions of Latin American indigenous groups, respecting their culture and belief.” In 2009, she received a “Women Together” award at the United Nations and the UN’s Solidarity Award in November 2010. In 2011 she launched her own organic line of beauty products, Taya Beauty, which are grown in environmentally sustainable programs in South American indigenous communities.

Her press materials note that in the book, she will “poignantly recall not only the triumphant story of working tirelessly to lift her family out of poverty, but also her years of feeling isolated, living a lie and hiding her true self from those she loved most.” The New York Post reviewer says that although Velásquez’s family was ultimately supportive of her coming out, “she also felt compelled to come out in a book, mainly because there’s so much prejudice that remains in the Latin community.” Her book is blurbed by heavyweights including Russell Simmons, Mariel Hemmingway and Narcisco Rodriguez, and promises to share a “strong message” about “the importance of female empowerment.”

In “The Mummy Returns”

Book Soup has this, vis a vis Post Hill Press:

“For many years, Patricia used her professional success to compensate for a secret she hid from her family. She convinced herself that her family’s happiness was more important than her own, and she spent years feeling achingly alone. Worse, she didn’t know the price she d pay for keeping a secret and living a lie, preventing not only herself from walking her journey, but those she loved most. Now she shares her story to empower others to live authentic lives and find their truth.”

Velásquez’s struggle is retrospectively apparent in interviews like this 2001 interview with Cinema.com, in which she fielded questions about why she doesn’t have a boyfriend (“I travel too much”), what she looks for in a man (“Anything that isn’t macho”) and whether or not she fears that one day she’ll “wake up and feel really lonely” if she doesn’t find a boyfriend soon (“No, not at all. First, I have my whole family, and I have great friends too. And I know that I’ll have kids at some point.”) before addressing the rumours about Sandra Bernhard:

There are all these rumours that you had an affair with [Sandra Bernhard. Are they true?]
Everyone talks about Sandra. Look, she was a very, very important person in my life – and she still is. She was a friend, she was like a mother to me, and also like my daughter sometimes. I had no idea who she was when we first met in France. She came to do a show and we became really good friends. People say many things, but at the end of the day people can say what they want. Sandra is somebody that I have in my heart forever, because I didn’t even speak English when I met her, and she taught me so much. I didn’t even know what a credit card was, or frequent flier cards or any of that stuff. She really, really helped me.

Velásquez’s accomplishments made her a role model before she ever sat down to write this book, but now that she has, she’s likely to inspire countless others to live their own truths. We can’t wait to see what she does next!

Our Senior Editor Yvonne Marquez will likely be interviewing Patricia soon, so if you have any questions you’d like her to ask, let us know in the comments! You can pre-order Straight Walk on Amazon now!