New York has long been heralded as a progressive place, especially for LGBTQ issues. Many youth born elsewhere come here looking for a space to define themselves on their own terms. I was one of them.

The history of the Stonewall uprising, the ballroom scene, and the extravagant Pride parades are just a few historical examples of why New York City has become an LGBTQ touchstone. But each year, New York state ranks among the highest in the country when it comes to anti-trans homicides. Between 2017 and 2020, at least nine trans individuals were reported murdered in New York state, making it one of top five states that are most hostile to trans people. It’s possible that more murders went unreported.

The numbers contradict existing stereotypes wherein the South is discarded as hotbeds of conservatism. One could argue that the way New York has branded itself as progressive allows it to conceal the violence that is inflicted on marginalized communities like trans people.

Cecilia Gentili has witnessed the true nature of New York’s violence for the past ten years as a community advocate. Prior to that, she was a long-time undocumented sex worker who had been incarcerated in a migrant detention center.

“We as a state like to be portrayed as the progressive state, but in reality, part of that equation comes from keeping conservatives from upstate content,” Gentili commented. “And that means not passing legislation that is supportive of sex workers or trans people or LGBT rights or women’s issues.” 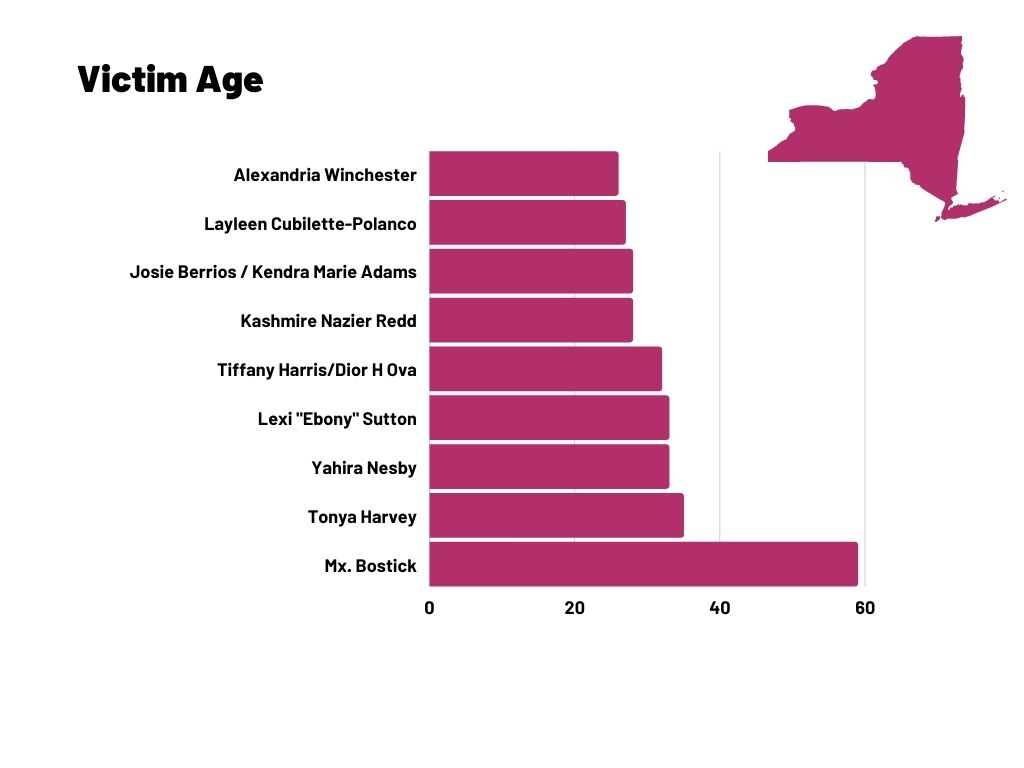 Indeed, when examined more closely, the Stonewall uprising—which has now acquired international recognition as the impetus for the LGBTQ movement in the U.S—occurred because of the brutality of the New York Police Department during its raids of queer gatherings. Similarly, the underground balls were a response to widespread family rejection and poverty. Queer families became a source of abundance when LGBTQ youth were denied basic resources that anyone would need to survive.

The policing that forced a response from icons like Marsha P. Johnson, Miss Major, and Sylvia Rivera is still a marked presence in the city. The NYPD is the largest police force in the country today, and is unique in that it has what it calls a “counterterrorism bureau,” something typically reserved for militaries. In 2011, former mayor Michael Bloomberg boasted the following: “I have my own army in the NYPD, which is the seventh largest army in the world.”

There is a history of NYPD targeting trans people for arrest, disrupting their lives and contributing to a cycle of poverty that entraps trans people in a web of violence. And state laws long supported the NYPD’s abusive behavior. Up until recently, Section 240.37 of the New York Penal Code allowed officers to arrest trans people if they suspected them of “loitering for the purposes of prostitution.” Community organizers called it the “walking while trans” law because of the way it criminalized trans people simply for existing.

“This is just another case of how much the lives of trans people are decided by cisgender people who have no idea of our experience. And it’s all a power game,” Cecilia Gentili told me.

As a response to ongoing violence against trans people and sex workers. Cecilia Gentili founded DecrimNY, an initiative helmed by a number of organizations working to end the criminalization of sex work altogether in the state.

As an effect of the heavy police presence, Black residents have historically been more likely to be entangled in the criminal legal system than their white counterparts. While Black people account for about a quarter of the city population, they make up nearly half of all arrests.

Black trans women face compounded violence, as they’re targeted in more ways than one. A legal case that rose to national recognition in 2019 was that of Layleen Xtravaganza Cubilette-Polanco, who was arrested on misdemeanor charges. Some of Polanco’s charges had to do with sex work. Her bail was set $500, an amount she couldn’t afford to pay. She was consequently jailed at Rikers Island, famous for stories of cruelty that occurred within its walls. The jail has in the past been nicknamed “Torture Island” and “Gladiator School.”

On June 7th, 2019, Polanco died from a preventable seizure while in solitary confinement. Video footage surfaced last year showing guards laughing at Polanco as she lay unconscious in her cell. Staff did not provide proper healthcare that may have prevented the seizure, nor did they fulfill their obligations to keeping her alive while she was unconscious.

Her death was one of the many that were commemorated in the Brooklyn Liberation March, on June 14th, 2020. The event is reported as having the highest turnout for trans lives in U.S. history, and it occurred during the ongoing Black uprisings. The thousands of attendees, all wearing white, showed up to listen to Black trans activists speak to how violence against Black trans people occurs from both police and civilians.

For many, the march was a return to the roots of Pride month, as a protest against state-sanctioned violence. But the event couldn’t have happened without the momentum built by Black trans leaders who’ve forced the mainstream to acknowledge the margins. While many point to the Trump administration as the source of violence, many Black trans people have been decrying their plight for many years. 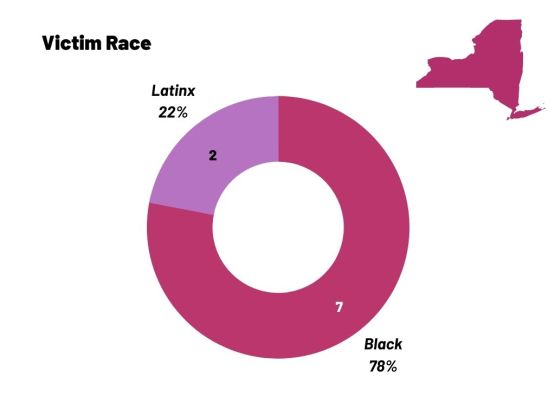 “I think that they keep using Trump as the problem. And Trump was only a problem that they allowed to be a problem,” said LaLa Zannell, who has been a crucial figure in Black trans communities and has devoted over ten years of work to ending violence. LaLa’s comment speaks to the way Trump was an embodiment of a national culture that is bigger than any one president — a culture that disregards the value of trans lives.

Chin Tsui has experienced this throughout his incarceration after immigrating from Hong Kong as a child. After being kicked out of his family home for being trans, Chin was left vulnerable while living on the streets. Chin was repeatedly a victim of human trafficking, wherein his life was threatened and he was coerced into performing illegal activity for his traffickers. Eventually, Chin ended up in immigration detention. He was put into solitary confinement for 19 months, often 24 hours a day, because he is a trans man.

According to Transgender Law Center, “LGBT people are rarely screened for human trafficking and until an expert asks the right questions, victims suffer in silence and fear.”

“Being an immigrant and trans, you’re a big target,” Chin told me. When Homeland Security Investigations confirmed his convictions were tied to him being a victim of trafficking, ICE reconsidered his case. Chin was released in March of 2020, after over two years in immigration prison.

Chin’s life illustrates what happens when trans people are denied the resources they need to thrive: housing, employment, and adequate identification documents, among other things. The poverty rate in 2015 for NYC was 19.9 percent, but trans people experienced poverty at a rate of 37%, according to the U.S. Transgender Survey. When seeking housing, 27 percent of trans people found themselves homeless, and almost one in three avoided a shelter for fear of being mistreated for their gender identity.

“We’ve seen that for public shelters, when we sent community members to public shelters in the city, they experienced a lot of violence,” said Cristina Herrera, who founded the TransLatinx Network in 2007 to address the needs of transgender immigrants. “And some are at women’s shelters and we’d see that there’s a lot of violence coming from cis women.”

Herrera’s two decades of advocacy work has led her to witness how trans communities develop shame and self-doubt as a result of countless barriers in their lives. These internal battles become their own additional obstacles that trans people must overcome.

“Many times they choose not to report [attacks] because dealing with violence, being a survivor of violence, it creates a lot of shame. You feel a sense of guilt in a way, because you blame yourself for not putting yourself in better situations and better economic opportunities,” Cristina explained. “But our communities are set up to fail.”

In 2019, community members celebrated the 50th anniversary of the Stonewall uprising, with New York City being chosen as the year’s site of World Pride. The resilience of trans communities had reverberated all around the globe. But it wasn’t without loss.

Trans communities shouldn’t have had to build resilience through suffering, through mourning.

I asked LaLa Zannell what gives her hope. “Every day I get up, I have hope. Because I know that somebody is not here no more,” she said. “I’m able to wake up and catch that first breath in the morning. There’s hope because I’m still here. It’s another day for me. I am honored to be here, still have another 24 hours. And there’s hope for me to get something done, to leave something here, to push something, to advance something, to combat something.”

The cycle of loss makes it easy to forget that trans people have long thrived before the first police raid on Stonewall Inn, in cultures all around the world. And many years, from now, trans people will continue giving birth to social movements, families, artistic innovations, and more.

Just as Chin Tsui said to me, “I’m not asking the whole world to accept us, but they need to know we are here, we’re not going nowhere.”