Introducing the Principles of Pride

As part of our No Justice, No Pride programming, our trans subject editor Xoai Pham has curated a five-part series called the Principles of Pride. The series unpacks the foundational values that clear a path forward for the LGBTQ movement, values that would make our ancestors proud.

Much of the history we now take for granted was considered impossible to the majority of our society. When the first Pride march took place in 1970, I’d bet many of elders and ancestors would have thought it impossible that trans people would garner success as media makers, artists, authors, scientists, and movement leaders. They might be surprised to see how many more of us than before have families that support us, the warmth of a home, and the healthcare that affirms who we are—though even with this progress, we know many of us don’t have the means to survive.

They might also be surprised to see that the police regularly make an appearance at Pride parades, despite the police brutality that instigated an LGBTQ movement in the first place.

Now, as we reflect on the centuries of violence committed since the first police forces were formed, we must consider why the call to defund police is so far-fetched. It’s time to return to our roots, so we can have a better compass for our collective future. Our Pride Principles series will delve into the values that we should work towards, to defend Black life, to truly honor the legacy of those who’ve come before us, and to create the conditions wherein all of us will thrive. The following piece is by the brilliant organizer, dancer, poet, and educator Benji Hart.

The justice we receive will be contained by the limits of our imaginations. Now is the time to expand beyond what we’ve known. Many lives depend on it.

I became a police and prison abolitionist in the years after four police officers attacked me in the Bronx, New York.

I was a teenager, crashing with friends at their apartment off Gun Hill Road. While walking back from the corner store, four cops chased me and pinned me to the hood of a car. I was dearrested by my friends who came downstairs when they heard the car alarm go off, and brought the officers my ID from inside the apartment.

As a Black, queer, femme person from a police family, I had not been raised to fear law enforcement. This was the first violent interaction I had with the cops. Its randomness, the despicable ways I was manhandled and spoken to, the palpable fear I felt for my life, all pushed me to learn about the true nature of the police system—its roots in both slave patrols and brutalizing worker movements—and convinced me that this system could, and should, be abolished.

For the majority of my years in the police and prison abolition movement, this idea was treated by most in my life as too radical, and wholly implausible. This week, that is changing.

Massive, decentralized, and militant uprisings continue to sweep the U.S. after video of the prolonged murder of George Floyd, a cis Black man, by a white police officer in Minneapolis, Minnesota on May 25th went viral. The 3rd precinct in Minneapolis went up in flames, and riots have destroyed city blocks in every region of the country.

The reigniting of the call #BlackLivesMatter occurs as the U.S. passes the grim goalpost of 100,000 COVID-19 deaths—suffered disproportionately by people of color, poor, working, and incarcerated folks. Unemployment has skyrocketed, and the racist enforcing of social distancing has singled out Black and Brown communities for increased surveillance and violence. Simultaneously, our #BlackLivesMatter declaration has pulled in the names of the countless other Black people recently murdered by police—among them Breonna Taylor, an EMT shot 8 times by police in Louisville, Kentucky while asleep in her own home, and Tony McDade, a Black trans man killed by police in Tallahassee, Florida the same week as George Floyd.

This moment is both familiar and unprecedented. The riots harken back to those in Ferguson and Baltimore only years ago, yet the diverse crowds and sheer breadth of the response mark a new chapter. While George Floyd’s name may be the most prominent, there is a growing awareness that Black women and trans people are also regularly murdered by police. Whereas in recent memory looting and rioting were decried as “the wrong way to protest,” more are making space for a diversity of tactics, honoring lives lost over property damaged. And on the ground in Minneapolis, where the MPD boasts a host of reforms like deescalation and mindfulness trainings, Black organizers are calling for the defunding of the department, demanding investment in existing community-led health and safety programs. When communities care for one another, and are provided the proper resources to do so, they argue, police become obsolete. 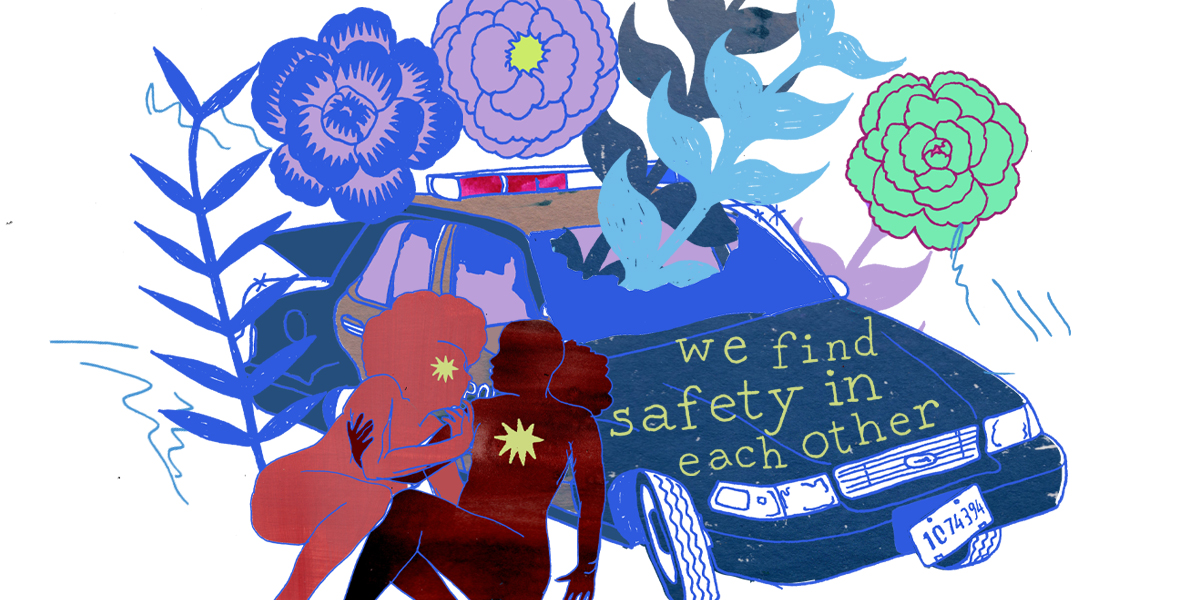 It’s long been a value held in the movement for prison abolition—which itself draws tactics and values from the movement to abolish chattel slavery—that the only way to reduce police violence is by reducing policing itself, shrinking the scope and power of departments by cutting their budgets and reallocating resources to community programs like affordable housing, free mental healthcare, public education, and healthy food. Such notions, which might have at one point sounded ludicrous to some, are gaining traction given the unceasing murders of Black people by police. Faith is waning in the decades worth of reforms that have done nothing to curb the violence. Current uprisings are giving new life to the abolitionist framework—and how fitting that they do so during Pride month.

Of course, Pride is itself the annual anniversary of a riot. The first Christopher Street Liberation Day March took place on June 28th, 1970, commemorating the notorious Stonewall Riots the year before, in which trans and queer women of color clashed with police during the raid of a gay bar. The inaugural rally took place in front of the New York Women’s House of Detention, protesting the incarceration of sex workers, trans people, and survivors, and demanding alternatives to the policing and criminalization—like anti-crossdressing laws and policies allowing condoms to be used as evidence of sex work—that had forced them behind bars.

Three years later, when Sylvia Rivera, a Boricua trans woman who’d been integral to both Stonewall and the first Christopher Street march, was banned from the event for being too politically outspoken, she stormed the stage, delivering her infamous “y’all better quiet down” speech. She railed not just against her own exclusion from the march she’d helped found, but for the incarcerated trans and queer people she felt the movement was abandoning as it prioritized mainstream acceptance: “The people [of STAR House, Rivera’s organization] are trying to do something for all of us, and not men and women that belong to a white middle class, white club, and that’s what y’all belong to! Revolution now!”

Pride as the site of queer resistance to policing and incarceration is hardly limited to the 1970s. In 2015, I joined other Black trans and queer organizers in blocking the Chicago Pride parade, calling for an end to stop-and-frisk, no new police and no new jails, and a reinvestment in housing and social services for trans and queer youth. The numerous Pride disruptions that occurred in the following years began a large scale conversation on the role of police in queer spaces, resulting in police being banned from participating in multiple Pride marches.

Legacies intersect in this Pride month to remind us that divesting from the police system is both a historically Black and historically queer demand, and that disruption and direct action can get that demand met. There is no stronger case for this than Minneapolis itself.

Within days of the rebellion in response to George Floyd’s murder, the Amalgamated Transit Union which represents local bus drivers made a statement decrying the racist attack, and allowing its workers the right to refuse to cooperate with police as they commandeered buses to round up protesters—a show of solidarity that has spread to other public transit workers around the country. The University of Minnesota severed its ties with the MPD, and days later Minneapolis Public Schools canceled its contract with the department—a demand Black students and families have been making for years.

I rejoice at these developments, for they justify the rage of the Black, queer teenager who was attacked in the Bronx. The demands I and other Black trans and queer people have been making in the years since that attack are more than plausible—they are necessary. A world without police simply requires the political will to actively divest from policing, and the collective desire to support rather than dispose of the most marginalized and criminalized among us.

Black protesters in Minneapolis have demonstrated what concrete steps can be taken in the direction of a police-free world. In honor of our movement ancestors, how do we follow suit? By lifting the demand to defund, divest, and abolish the police in every circle and institution we belong to, affirming the belief that public safety comes from members of the public having access to the resources they need to thrive, not from being harassed by law enforcement.

Skip the anti-bias training and get straight to ending relationships with police all together: Does your school have a contract with a local police department? Start a campaign to get it canceled. Does your medical center report survivors of violence to law enforcement without their consent? Link them to counseling and other social services instead of handing them off to police—who are themselves a source of violence. Does your neighborhood organization have a policy around calling 911? Discuss safety plans for moments of escalation that rely on relationships between residents, leaving police out of the equation. And at every chance, pressure local officials and organizations to cut the budgets of police departments (including failed reforms like body cameras and de-escalation training) in place of social programs that put resources directly in the hands of community members.

On June 3, 2020 officials in Los Angeles agreed to cut up to $150 million from the LAPD budget, to be reinvested in communities of color. This was only possible because of uprisings happening around the world demanding justice for stolen Black lives, and divestment from the policing system. And while a few million is a drop in the bucket of the $1.8 billion LAPD receives annually, cutting the budget at all is a largely unprecedented step towards abolition. Demonstrating that policing can be reduced, and the world very often improves as a result, is a crucial move towards the long term vision of a world where police are not relied on at all.

Happy Pride! May we rebel in ways that future generations can celebrate. May we defend protesters against violent state repression. And may we fight with every fiber of our being to abolish the police and prison systems, making the true safety our communities deserve possible.