The titular tech company of Netflix’s London-set The One promises to connect people with their one true love based entirely on science. Matches — as they’re called on the show — fall almost instantly in love with one another. The dating site to end all dating sites was cooked up by the ruthless scientist Rebecca Webb (Hannah Ware) and her friend/lab partner James Whiting (Dimitri Leonidas) and requires users to send in a DNA sample which is then compared against all other DNA samples in the database until a genetic match is found. But the occasionally thrilling, often vacuous drama is less concerned with the tech dystopia it’s mired in and more concerned with a by-the-numbers murder mystery plot that stymies the show from saying anything meaningful about the messy intersections of tech, love, capitalism, wealth, identity, and desire that are just on the periphery of the narrative. Netflix The One lesbian love triangle also gets lost in the plot.

Now, I’m usually all about meeting a sci-fi series where it is and rarely enjoy the nitpicky process of challenging or questioning rules for a particular world too closely (although in extreme cases like Chilling Adventures of Sabrina, the inconsistency and improvisation of the rules from episode to episode is incredibly frustrating). So if The One — based on a novel by John Marrs — tells me that soulmates can be scientifically determined, I’m willing to go with it. To a point. I ultimately found myself really struggling to connect with the show’s mere premise as the series progressed, particularly because there’s no real interrogation of what it means that people supposedly have one person who they’re perfectly compatible with. There’s a hollowness to the show’s depiction of love. Matches feel an instant connection. It doesn’t matter if they don’t share interests or priorities or morals. Their romance is rooted in that chemical high of early relationships — all dopamine and serotonin and bliss. But we rarely see matches connect on a level deeper than any of this. The One demands absolute and total faith in fated romance. 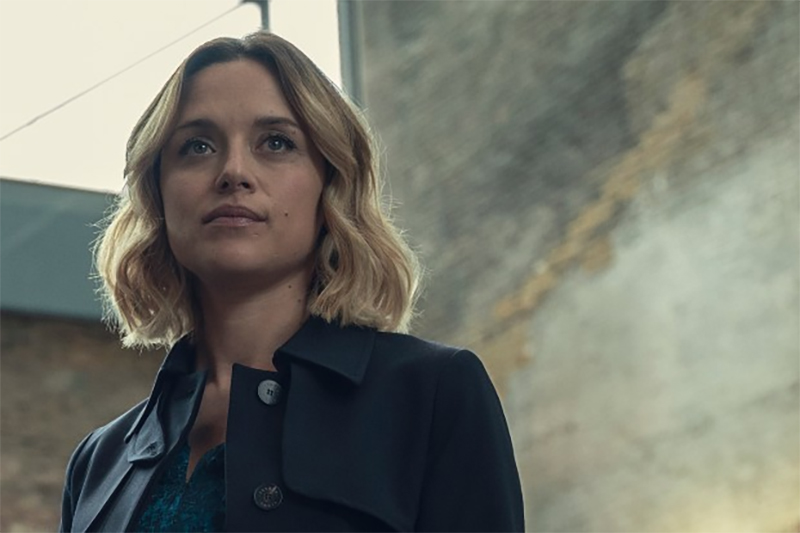 As so many stylish streaming dramas do, The One opens with a dead body. We quickly find out who it is — The One’s CEO Rebbeca’s former roommate and friend Ben Naser (Amir El-Masry) — and we also quickly learn that Rebbeca and James share responsibility for his death. Trust me: Those things aren’t spoilers. The One instead relies on the cat-and-mouse games between Rebecca and the two detectives investigating Ben’s disappearance to fuel its suspense. But that fuel peters out quickly, and The One falls into the all-too-common crime drama trap of over-relying on twists rather than crafting an exciting narrative with compelling characters.

But really the biggest disappointment is how sterilized the premise ends up being. The One hinges on two great myths: soulmates and love at first sight. And every time it inches toward saying anything insightful about either concept or dismantling them — the twist I was waiting for that never came — the story’s attention snaps away from it to focus again on the murder plot, which is the least interesting part of the show and yet its main concern. Soulmate mythology has been around for a very long time. Pop culture festishizes the idea that every person has one person who they’re meant to be with. That narrative begets a whole slew of problems — from people hinging their self worth on others to cultural biases against nonmonogamy to people staying with people who harm them because they’ve convinced themselves they’re destined to be together. I realize that I’m a biased viewer when it comes to The One, because the negative side effects of perpetuating the soulmate tale are something I think about a lot. But it’s just such a missed opportunity to not engage with anything regarding the show’s premise on a deeper level. Again, I was waiting for a twist that never came. A twist that would reveal that The One’s promise of true love is more dangerous than it is hopeful. 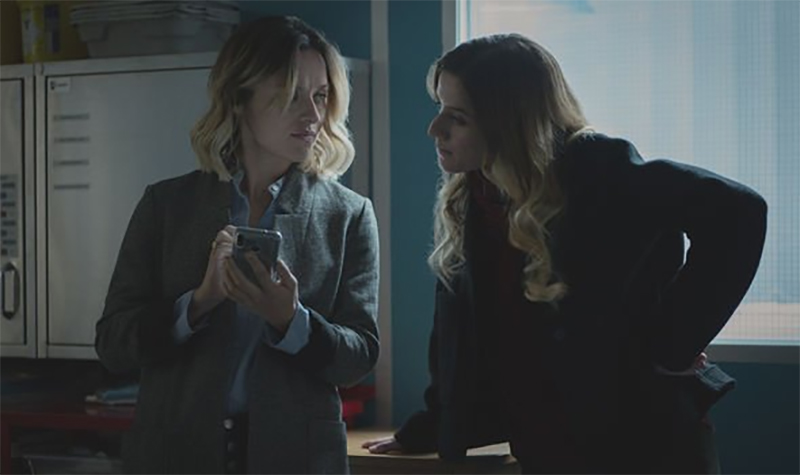 Technically, the show does explore some of the downsides of The One. One of Rebecca’s many nemeses is a politician who wants to put more restrictions on the company because of an uptick in divorces. People in marriages have been secretly sending out their DNA and then leaving their spouses for their perfect matches. Rebecca claims that The One fixes dating, but in a way, it also destroys relationships. Just because a relationship isn’t perfect doesn’t mean it’s not good. Even people in good relationships might become consumed with the thought that there could be something even better out there.

That’s the impetus for the side character Hannah (Lois Chimimba) to send in a lock of her husband Mark’s (Eric Kofi-Abrefa) hair without his permission. She thinks that if she could find who his match is, she could emulate them and be a better partner to Mark. Their marriage is solid. Hannah has no real reason to doubt Mark’s love. But still, The One worms its way into her head. She finds Mark’s match Megan (Pallavi Sharda) and goes so far as to befriend her. A dark comedy of errors and misidentity ensues. And, early on, this subplot was enough to make me genuinely interested in the series. But once the attention shifted too significantly back toward the murder stuff, there was less to keep me hooked. But Hannah’s actions in the first half of the series are exactly what I was hoping to see more of on The One: the messiness of romantic entanglements, the mind games people too often play when it comes to love. Hannah’s pursuit of Megan is rooted in jealousy, insecurity, and trust issues. It’s a betrayal of Mark. In supposedly attempting to get closer to Mark, Hannah ends up pushing him away, right into Megan’s arms. But the second half of the series struggles to really give weight to any of this, instead turning it into a tepid love triangle and never fully delivering on any of the complex emotional issues it raises.

In a similar vein, Kate (Zoë Tapper), one of the detectives investigating Ben Nasir’s death, has a match subplot of her own. She matches with a woman named Sophia (Jana Pérez) who lives in Barcelona, and after chatting and sharing a FaceTime cooking date (that, in my opinion, seemed horrible!) Sophia agrees to fly to London so they can meet in person. But on her way from the airport to the bar to meet Kate, Sophia gets in an accident that leaves her in a coma for much of the series. Kate suddenly has to deal with the grief of not getting to meet the person she’s meant to be with and then is confronted by another emotional blow: Sophia’s wife, who did not know Sophia joined The One, shows up at the hospital.

Kate and Valeria (Paula Muñoz) strike up an unusual friendship after the initially awkward encounter, and Valeria ends up telling her that Sophia is basically a big ol’ liar. She cheats constantly, and she rewrites her past, telling both women she doesn’t have any family when in fact she has a brother and a father. There’s family drama there that is very drawn-out and ultimately adds little to the show. But it’s also just another instance of The One’s premise asking too much of viewers. Kate seems completely unfazed by Sophia’s many indiscretions as detailed by Valeria. Are we to believe that Sophia would not ever cheat on Kate simply because they are soulmates? Sophia still does lie to Kate, and Kate ends up being relatively fine with it. Again… because they’re soulmates? Is the suggestion here that those matched on The One will always love each other regardless of conflict or harm done to each other? 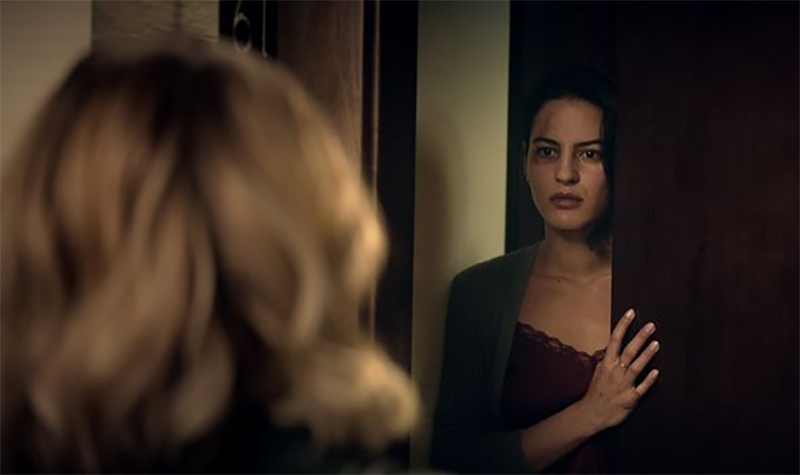 The closest the show comes to challenging that notion is when Rebecca’s soulmate — who she was matched with before the company launched under nefarious circumstances due to Rebecca and James having to illegally obtain DNA info to run trials—  realizes the extent of Rebecca’s betrayals and cruelty. But that moment gets cut short by yet another one of the show’s twists that prioritize plot over character. We’re once again left holding nothing.

So the show really drops the ball when it comes to some of these side characters and the way their stories reflect societal changes brought about by The One, but then when it comes to the murder storyline its so hellbent on developing, it’s unsatisfying, too. The show is inconsistent in the ways it draws Rebecca’s arc, making a jagged mess of it. Rebecca is honestly the most captivating at her most evil. But the show weirdly attempts to backtrack and make it seem like she hasn’t always been this way, that wealth and power corrupted her and shaped her into a new person altogether.

That would work better if we weren’t shown many examples of her being evil in the flashbacks. It seems Rebecca has always been driven by power, greed, and ego. The show tries to make a very big deal out of a choice that she makes that greatly betrays her soulmate near the end of the season, but it’s no worse of a choice than some of the previous ones she’s made. This is a woman who eagerly shouted at her henchman to shoot her former friend in the knee — an order that not even her henchman will go through with because it’s too much! Then, we’re later expected to believe that same friend would eventually come around and tell Rebecca that she’s not really a bad person but that they just got caught up in something bad? It’s so wildly unconvincing.

The One’s premise is positioned to explore such interesting themes and emotional stakes, but it says nothing new about soulmates, about tech’s impact on relationships, about morally corrupt capitalists. For what it’s worth, AMC’s Soulmates has a very similar premise but manages to be a lot more skeptical about it, yielding better storytelling and character work overall. If you’re as weary of soulmate mythos as I am, that show rather than The One might be your better match.