I guess this is a month for spooky games. Jenna played Little Nightmares, which was actually a great big nightmare according to me. I watched her play some of it and was stressed out even just watching and I sincerely applaud her bravery. Coming off of that horrible experience I for some reason decided to play Prey, which sounded definitely too scary for me but also very good because it was made by the same studio who made Dishonored 2, which was a surprisingly fun adventure. And you know what maybe I ought to try going out of my comfort zone every now and then. Let’s do it.

Prey begins in that “Wake up, you’ve got a big day ahead of you!” kind of way. Put on your suit! Get to the chopper! We’ve got some kind of science to submit ourselves to, I guess. But first, we can take the opportunity to explore our apartment and gather up every piece of trash we can find, which is, after all, the most important part of video games. I have to say, this game has a really nice amount of trash in it. Not so much as Fallout 4, where you could snatch up pretty much every single thing and it was overwhelming, but just like a little trash in every room. A banana peel and some cigar butts over here, a spool of wire over there. Trash-wise I was immediately satisfied with this game. 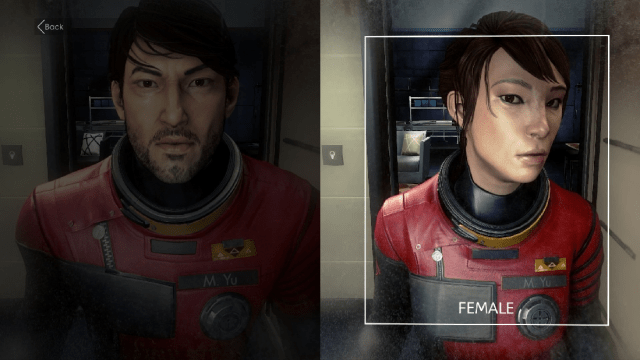 So. Pockets full of garbage, I got on the helicopter to head to work or whatever this arrangement is supposed to be. Then, when I exited the chopper, being apparently a scientist, I decided to test the rules of the game and immediately tried climbing/jumping to see if the rotor would kill me. It did! Achievement unlocked! Good shit. I did forget to save before sacrificing myself in the name of science, though, so I had to go back and collect all of my trash again and do the cut scene again. But now, satisfied with my own mortality, I decided to do the things the game probably wants me to do, which were tests about pushing buttons and moving blocks. Easy stuff! I am GOOD at this game. But then a smoke monster spider jumped out of a coffee mug and ate a scientist, and, dude. Life is never just collecting trash and playing with blocks, is it?

Okay. But then we wake up in our room again and get the same messages and it’s apparently the same day again and I was so mad because I did NOT sign up for Groundhog Day, a movie which makes me way more anxious than any monsters probably ever could. But thankfully it is not really the same day, it is a spookier day, and everything is a simulation, except the part where all hell has broken loose in the form of ethereal spider monsters that can hide in your coffee. That is very real. Well, thank god I have a fucking WRENCH to fight them with. And also we are on a space station. 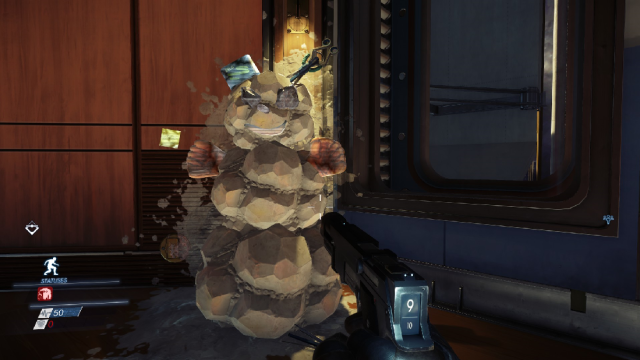 Things are bad enough around here without your terrifying bullshit, Karen.

The plot will feel pretty familiar to anybody who has ever seen an Alien movie, or a movie of any kind. It’s one of those “Did you know that human beings are the only species to produce Businessmen?” kind of deals, with some memory loss tossed in to make you wonder at all times whether the Businessman was you all along. There’s also some immoral science stuff that reminds me of The Passage, one of my favorite apocalypse books. And the gameplay is also very familiar. The wrench and the aesthetic make this game feel at first so similar to Bioshock that it might as well be a sequel. The controls and abilities (and the character models) should feel pretty comfortable if you played the Dishonored games, because, again, same studio. I will say that the design of the station itself, the interiors and the objects, felt a little bland to me. Maybe there is a reason for that, like how airplanes are furnished with the cheapest materials imaginable so maybe space stations are built of gilded plastic, but it just never felt as lovingly designed as either Bioshock or Dishonored 2. The one visual thing that was oddly great is, so, remember how we are carrying around all the trash we can get our hands on? You can put the trash in a recycling machine, and, in addition to cleaning up and recycling just feeling like a nice thing to do in this dirty space town, recycling turns everything into these neat little cubes and spheres of materials you can use to create useful items like medkits and bullets. And those little blocks are very pretty.

I found the story a little hard to keep up with but I think that’s just the way my brain works? The gameplay is just trying to get from one part of the space station to the next for any number of reasons while killing awful alien ghost monsters and trying not to die, but the plot mostly already happened or is being told to you in pieces as you go, so I never felt like I was the plot so much as I was a witness to the plot. Like, the most interesting stories aren’t even your story. Most of the people on board the space station had a computer terminal, and you can access most of them either by finding passwords or by using a hacking skill. In their emails and files, you pick up on the interpersonal drama of the crew, their hobbies and personalities, and also their concerns about the actual business of the place. Most of these people are already dead, and it’s pretty sad finding corpses whose names you recognize, even if you only know them from email chains and voice recordings. The rest of the plot is fed to you by a few opposing forces who contact you by phone to tell you what you need to be doing, but sometimes those calls came in so constantly that I couldn’t keep up with them and then sometimes they didn’t happen at all for a while and I lost track of any directive beyond shooting everything that moves, including inanimate objects. 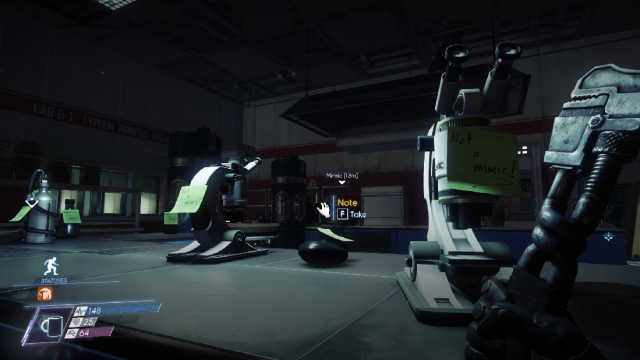 The monsters are so scary. The little ones hide in the furniture and skitter around and you never know quite where they are until they are THERE, and you never can trust any object in the game because it might just be a monster in disguise, like that time there was a giant spider living in my favorite chair, or at least I saw it on the chair one time and then I never sat in that chair again. (This was in real life.) I once tried to grab a healing kit and it turned into a mimic! The absolute treachery! (This was in the game.) Eventually, you get a thing that lets you scan the room for hidden mimics, but it feels like being underwater and I felt very vulnerable when I used it. Then the bigger ones, the Phantoms, have sad human thoughts and you hear them thumping around and then they are in front of you and they are angry and it’s bad. And there are bigger worse things yet and also more insidious things and sometimes there are living human people but that’s not necessarily a good thing either. 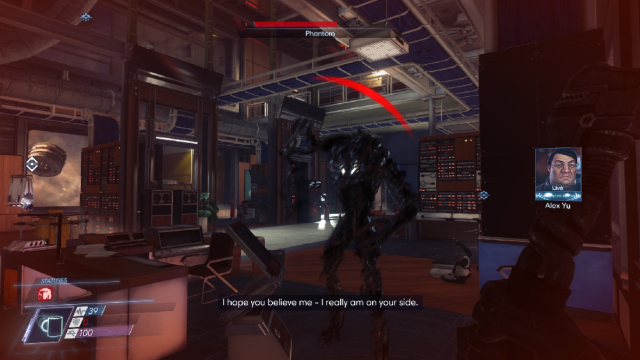 Buddy I’m gonna need to call you back.

A thing that drew me to this game originally was that the protagonist, Morgan Yu, is Not A White Man With Brown Stubble. Morgan is, according to the Steam trading cards, of Chinese and German descent. It’s so rare to see a pre-designed protagonist who is canonically not white. AND, you can play Morgan as either a man or a woman. If you play as Girl Morgan, which obviously I did, she is also canonically queer, having had a previous relationship with the station’s Chief Engineer Mikhaila Ilyushin. There’s also a lengthy subplot you find through emails and audio logs in one area about two female crew members in a relationship and also they play Not Exactly Dungeons & Dragons together and it’s very moving. But this game is very much about shooting aliens and not very much about happy endings so, uh, probably don’t expect a lot of smooches. 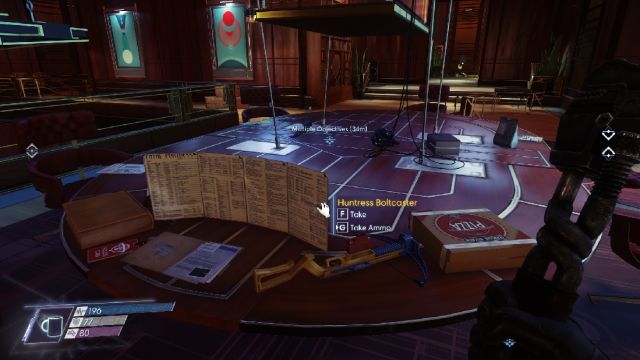 Too pure for this galaxy, my nerd babes.

Prey is available on Windows PC, Ps4 and Xbox One. I played it on PC and had a couple of crashes but no bugs. I played it on easy mode from the very beginning because I knew that I was going to be too scared to be any good at it, and boy was I correct. I died a lot of times! I also collected every piece of trash I ever saw, turned myself into a bottle of whiskey to sneak into a narrow doorway, and accidentally recycled a few crew members into organic materials. I regret maybe that last thing, but very little else. This is a good game. If you like shooting and smashing and space and don’t really feel like talking to anybody ever and if you are less afraid of everything that moves than I am, I think this just might be the game for you.