As part of our No Justice, No Pride programming, our trans subject editor Xoai Pham has curated a five-part series called the Principles of Pride. The series unpacks the foundational values that clear a path forward for the LGBTQ movement, values that would make our ancestors proud. This is the second in this series; you can read the first here: Police and Prisons Do Not Belong in Our Future.

Let me tell you something about sex work: It saves lives. Sex workers, more often than not, are people who have saved their own lives by seizing control of the most important means of production; that is, our own bodies.

Let me tell you something about me: Sex work saved my life when I was suicidal and broke… Sex work gave me a livelihood and autonomy, when chronic illness and transphobia meant I couldn’t make a living otherwise. Sex workers taught me resilience and self-worth. Queer “community,” with its endless callouts and purity politics, has never come close to doing that. Meanwhile dominant society marked my racialized trans woman’s body for death a long time ago. Sex work saved me when nothing else would, gave me a way to save myself.

Maybe you came here expecting a congenial, well-reasoned article patiently defending the virtues of sex work as a profession and politely asking for solidarity. This isn’t that article. That article has already been written, several times, by several different authors. That article should have changed all of your minds already about the fact that sex workers are human beings who deserve basic human rights, but apparently it didn’t, so here we are. Still criminalized, still stigmatized, still by and large ignored by mainstream “LGBT community,” despite the fact that transfeminine sex workers such as Marsha P. Johnson and Sylvia Rivera are the reason that we have Pride in the first place.

People love the idea that sex workers need saving. A lot of money, power, and attention goes into that idea – not to sex workers, but to our would-be saviors: Non-profit organizations, psychologists and social workers, sex work exclusionary “feminist” activists, and the police. Perhaps this is why the sex worker salvation industry has yet to even try to change any of the socioeconomic conditions that lead to the exploitation and endangerment of sex workers in the first place: Poverty, primarily. Housing and employment discrimination. Incarceration. Domestic and familial abuse. In order to do that, though, anti-sex work activists and police would have to actually care about sex workers’ actual lives, as opposed to their self-image as Real Life Heroes™ rescuing us from evil human traffickers.

Human trafficking is a real concern that must be addressed and brought to an end. Note, however, that human trafficking – the bondage and forced labour of human beings – is not unique to the sex industry, but rather endemic to capitalism. Human trafficking occurs in the fields of domestic labour, agricultural work, and other low-status occupations as well as sex work, and will continue to occur for as long as we live in a society that values economic production over the rights and freedoms of workers. Note that the criminalization of sex work (not to mention undocumented migrants) actively prevents many victims of human trafficking from seeking help.

Oh, and in case anyone was wondering? Human traffickers target members of vulnerable groups, such as queer and trans youth, racialized women, and migrants, not middle-class white women in shopping mall parking lots, viral social media memes notwithstanding.

Many of the sex workers I know are brave, resilient survivors who turned to sexual labour in order to get out of a bad situation – commonly referred to as survival sex work. Yet many others are badass hustlers carving out a lucrative livelihood in the midst of a rotting capitalist system. Still others are erotic muses, artists, and healers who have found their true calling. There are an infinite number of ways to be a sex worker, but we have one thing in common: We deserve to determine our own paths and tell our own stories, just like everybody else. That’s why sex work must be fully decriminalized immediately, and preferably sooner. 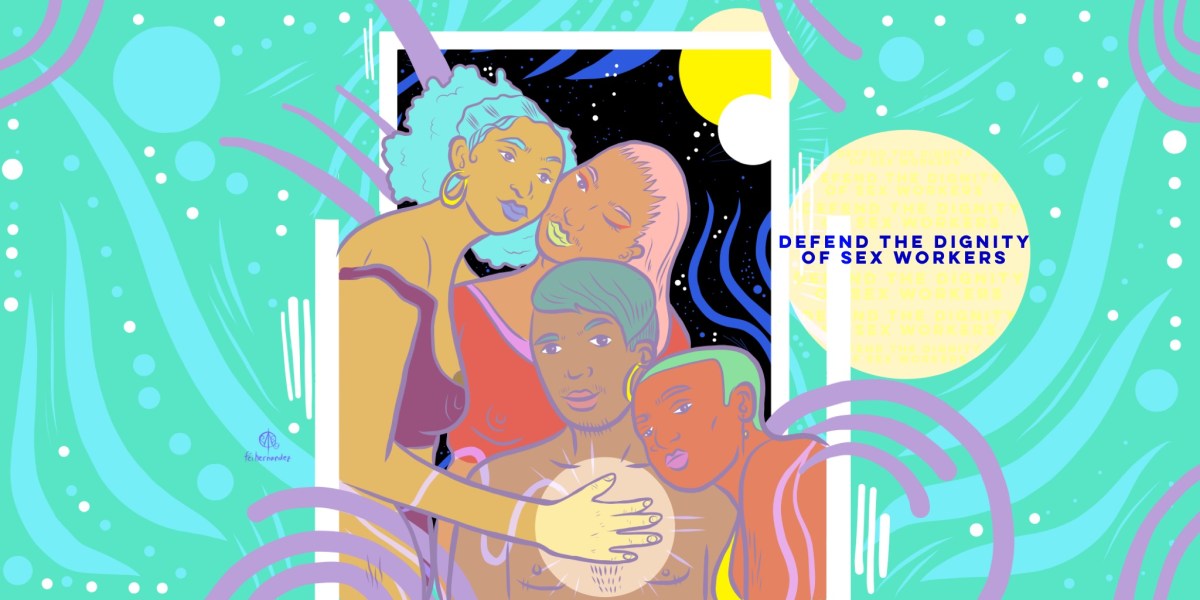 Criminalization punishes and kills sex workers: For one thing, it drives our work underground, leaving us susceptible to violence and exploitation from clients and employers. Worse, it also opens us to vast amounts of abuse by law enforcement, who are allowed to detain, humiliate, and assault sex workers with virtual impunity. The criminalization of sex work primarily targets, and most significantly affects migrant, poor, queer, and trans people of color—and especially Black and Indigenous people. Is it any wonder that the vast majority of sex workers are in support of recent calls to defund and abolish the police?

Even the much-vaunted “Nordic Model,” which purports to protect sex workers while criminalizing clients, is actually extremely harmful. This is because it makes clients unwilling to provide essential screening information (for example, their legal names and employers) that can help to keep sex workers safe. The Nordic Model also significantly reduces the market for sex work – which might sound good to certain radical feminists in theory, but in real life results in sex workers being less able to turn down unsafe or exploitative working conditions.

Sex workers are not a thought experiment. Masturbatory left-wing intellectual debate about “whether sex work would exist in a post-revolution society” is not only irrelevant to our actual lives, but condescending and inherently sex-negative. So-called progressives, sex work-exclusionary feminists, and conservatives all seem to imagine our lives as a bottomless fountain of tears, days spent weeping with our feet in the air as an endless horde of degenerates pummels us relentlessly from above.

What if I told you that sex workers are brilliant strategists, seasoned businesspeople, technological innovators, and skilled professionals? Sex workers were among the first to innovate internet advertising, as well as social media marketing – innovations that were promptly seized upon by entrepreneurs of all kinds. Sex workers’ expert knowledge of human eroticism and intimacy were used by world-renowned sexologists, Masters and Johnson, to develop what would eventually become contemporary sex therapy. The influence and accomplishments of sex workers are everywhere, if you only you bother to look.

What if I told you that our job, at its heart, is about giving people pleasure, which is a vastly more ethical and worthwhile pursuit than most of the high-status professions in existence today? Why do we try to debate and legislate sex workers out of existence while hedge fund managers and corporate lawyers walk about in broad daylight?

No, not every sex worker is in the business because they enjoy the work. Do Amazon warehouse employees and fast-food service workers all love their jobs? Do nurses and doctors, now that the COVID-19 pandemic is here? Sex workers are the target of an extreme double standard that says if we aren’t screaming with joy every second of every day, our work isn’t legitimate. What, exactly, makes a job “legitimate”? What makes a worker worthy of respect?

If you don’t stand with sex workers, you’re not a real progressive, feminist, or queer activist. If you’re not paying attention to and learning from the wisdom, experience, and genius of sex workers, then your politics are missing something essential that can’t be found anywhere else. Do you want to support sex workers? I have some suggestions: Stop trying to “save” us. Start connecting with sex work support organizations that are run by sex workers. Call or write your political representatives and demand the immediate decriminalization of erotic labour. And for the love of god, stop judging and shaming people who pay consenting adults for sex – or better yet, consider hiring a sex worker yourself (remember to tip well).

Sex workers have a vantage point on society, policy, and community that no one else does. Sex work history has a deep, rich legacy of advocacy, mutual aid, and protest – of holding and fighting for people that have been otherwise forgotten. Marsha P Johnson and Sylvia Rivera started the first home for homeless queer youth. A sex worker named Mirha Soleil-Ross started the first social service program for trans people in Canada.

Imagine, if you will, a world in which sex workers were free – not just safe, but really free, as labourers and as human beings. Sexual consent and healthy intimacy would need to be woven deep into the culture of such a world. In a world where sex workers were free, the rights of workers, people of colour, women, and trans people would need to be centred and nurtured in the collective consciousness. Body positivity and body sovereignty, including the right to reproductive and gender transition healthcare would have to be a given. A free world for sex workers would be a free world for people’s bodies, desires, and pleasures – that is to say, a world worth fighting for.

Tell me, what’s more revolutionary than that?