Hello welcome to your pop culture fix, a weekly edition of cool news for cool kids who like doing cool things with their cool pals.

+ Wanda Sykes just wrapped shooting a pilot for ABC called “Dream Team” in which she’s a lesbian OBGYN married to a woman with a daughter on the soccer team. I absolutely cannot wait and if it does not show up on my television screen I’ll die.

+ AND YET ANOTHER PIECE OF NEWS regarding a lesbian character of color on your teevee! Tattiawana Jones will be starring in the Untitled Weeks/Mackay comedy pilot about a lesbian and her straight best friend navigating their dysfunctional, co-dependent friendship. She’s best-known for Flashpoint but has also been in queer tv show Lost Girl and the lesbian film Tru Love.

+ In Season 2B of Empire, Tiana will have a new male companion and “Bre-Z hopes that the latter half of season 2 will “keep that realness,” but that Freda learns to open up and transition out of that “dark space” she’s been inhabiting for so long and “learn to have a little bit more fun.”” Also, Cookie will call Naomi Campbell’s character a “half-lesbian” and ask Jamal to “pick a damn team.”

+ I wanted to see how gay/bi male deaths compared to gay/bi female deaths, so I made this list for Queerty! I was actually expecting there to be way more gay/bi male deaths than female, due to the fact that gay men outnumber gay women on TV at something like 3:2… but… nope.

+ On that note, let’s talk about how we got here: The Mary Sue discusses what led to the history of Media Burying Its Gays, and looks at lots of reasons including:

“It doesn’t matter if they die to violence (Boys Don’t Cry), disease (the recently released Freeheld) or AIDS (throw a dart, you’ll hit one), the number of films about queer people suffering and dying so far outnumbers all other kinds of media about them that it’s absurd.”

+ On an entirely different note, you might like this article from Bitch about Cameron Esposito’s new special, Marriage Material, especially this part: 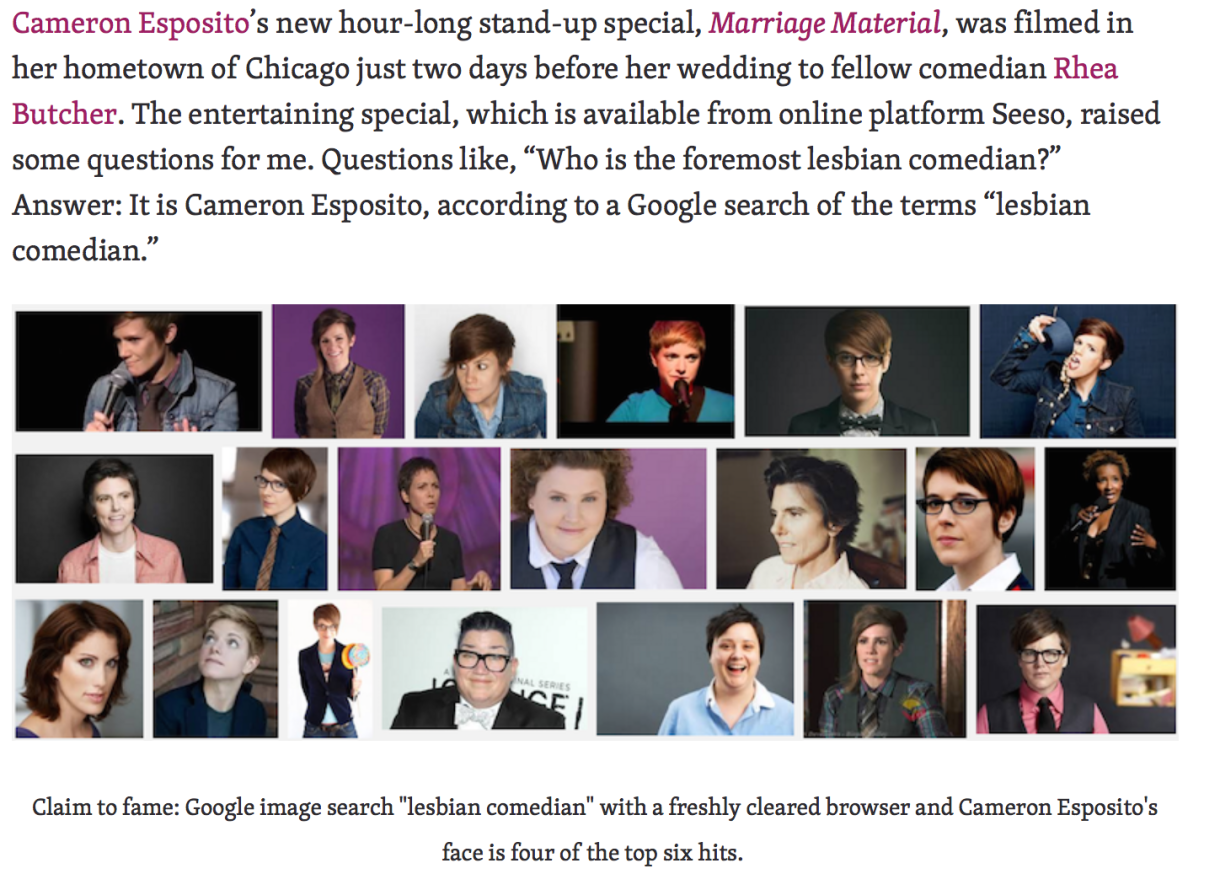 So much Cameron and Deanne Smith!

I oftentimes receive the question, “What do you think is the most important social issue to focus on?” Or, “What’s the most important component of identity? Is it gay rights or race or feminism?” And I’m like, “Well, they’re all intertwined. It’s all one conversation at the end of the day. You can’t just pick one.” I mean, people experience all kinds of prejudice because of all different parts of themselves. And that doesn’t make one part more important than the other.

In middle school there was literally a spot for the cool kids to sit. You could only sit there if you were cool, and I wasn’t. So I would go read Hugo Cabret under the slides. All my friends were literary characters. So that’s so important to me, that a girl on Instagram doesn’t see a group of girls and feel intimidated. No girl should feel scared to be friends with other females.

+ Are you a female? Do you like film? Are you into things that are essential (besides essential oils, obviously)? Then you might want to hear about these feminist film essentials.

+ Indiewire’s film-in-progress series looks at Signature Move, a film described as “a romantic comedy meets coming-of-age story about Zaynab, a Pakistani, Muslim, lesbian who takes care of her sweet, TV-obsessed mother and is seeking her identity in love and wrestling”

+ A Montreal artist re-created ’90s teen idol heartthrob posters with women and the whole thing feels ever so queer. If that story interests you, you might also enjoy:

+ Kristen Stewart and Soko: A Romance for the Ages!