Lisa Wade recently wrote a lament on the lack of “gender-neutral clothing” for kids, but also for and adults (on  Sociological Images, cross-posted by Jezebel), spurred by the sign spotted at UK retailer Polarn O. Pyret [image, right]

This lament could be the tag line for 50% of Autostraddle’s fashion/style coverage — we’re constantly struggling against The Gendered Powers that be to find a unisexual compromise whether it be boyshorts without penis pockets, make-your-own skinny ties, swimwear for the ambisexual gender-confused, highlighting lezzie-owned fashion retailers making leather goods with girls in mind, analyzing the lesbian draw towards an androgynous hipster aesthetic or talking to Real Live lesbians who dare to take queer style into their own hands.

But now women of undefined sexual orientation are apparently clamoring for the same thing like all good feminists should:

With the exception of the t-shirt (which only masquerades as gender neutral), in the U.S. clothes are designed for women or men, but never both. Department stores and retail stores (unless they sell only men’s or women’s clothing) have separate men’s and women’s sections in the store. There is no option to buy clothes, one must buy “women’s” or “men’s” clothes.

This is even true for children’s clothes. One might make the argument that adult males and females have different bodies (an argument I might argue with), but we can’t say that pre-pubertal children do. Nevertheless, the cultural rules that require boys and men to dress differently than girls and women make such a clothing line seem impossible.

Wade is encouraged that things might be changing, highlighting UK clothing company Polarn O.Pyret, which apparently has launched a unisex collection “based on situation and function rather than gender.”

Can you imagine? Unisex clothing sections? Especially when shopping online, which can often feel like an intense cerebral battle with the gendered brain of your given clothing outlet’s search engine (rather than a physical store, which enables you to view both sections with your eyeballs and move physically between them). I checked out some children’s clothing retailers online to use as graphics for this roundtable AND OMFG you cannot even ENTER the website without picking a gender!

There is NOTHING in between! Except, of course, over at the possibly evil American Apparel, where you will find no mention of gender in their children’s clothing area, with both girls and boys modeling clothing divided by type, not gender: 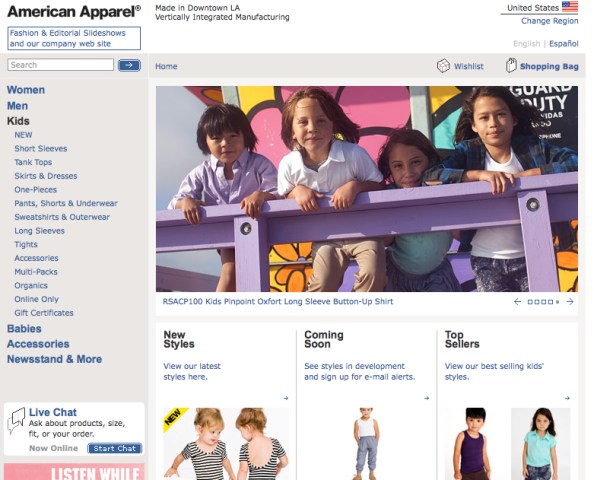 “It’s a shame that in 2010 the most we can boast about is a maybe progressive baby shop in the UK.”

I have always loved androgynous/gender neutral style. I, too, would argue with the argument that “adult males and females have different bodies”, or rather, I would argue with the fact that “they” automatically assume that one would want clothing that accentuates or “fits” certain attributes of their body. It’s a shame that in 2010 the most we can boast about is a maybe progressive baby shop in the UK. I mean, sure, it’s great news, it’s a step in the right direction, but really? What the hell are we so afraid of?  I understand the need to organize and categorize clothes and that the most obvious way to do so is by gender, but it makes me sad that an improved, more self-aware system will take awhile, if ever, to come about. Maybe I missed something and it was actually the gender neutrality of the American Apparel hoodie that brought about the most recent war. Anyway, koodos to Polarn O. Pyret for mixing it up. It is a small (no pun intended) victory after that Dockers fiasco… 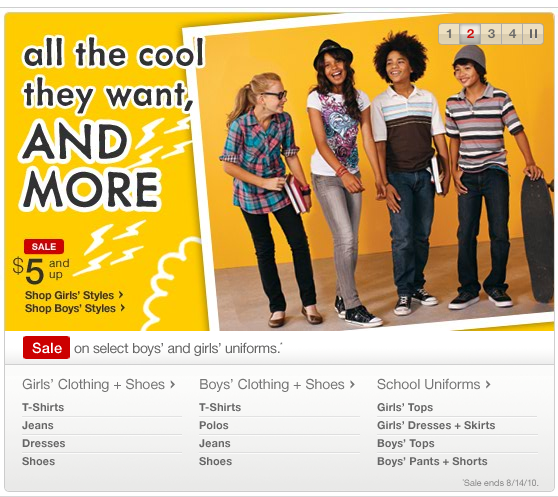 “Looking in the men’s section of J. Crew makes me want to hang myself with a skinny tie..”

This is something that plagues me, especially during the summer. In fact, I was just bemoaning my complete absence of summer style, because I wear t-shirts and shorts with no accessories to speak of and I constantly yearn for hoodie weather.

I’d kill to have a store offer the same stuff for men & women, or even offer a comprehensive selection of “men’s wear” in small sizes when my style veers toward andro. If I want to dress, dapper-like, I’m totally out of luck, unless I collect bits and pieces of androgynous stuff and then cobble them together into an outfit. And this is in New York, a city that offers smaller men’s sizes in many stores to accommodate an array of very svelte, stylish men, unlike those same stores in say, Oklahoma City.

Looking in the men’s section of J. Crew makes me want to hang myself with a skinny tie. I think about this all of the time, seriously. Oddly, what I haven’t thought about is the utility of gendered clothing for differently shaped bodies, an argument that doesn’t affect me too much since I don’t have too many curves to contend with, but it’s a damned solid argument against gendered kids clothing. 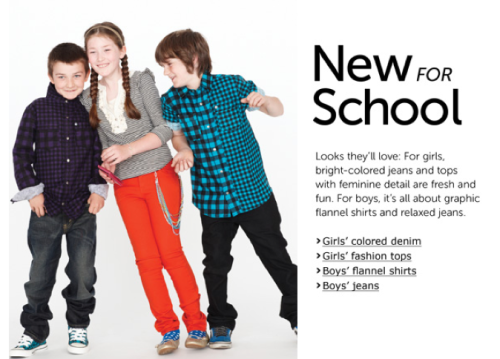 “I think my Mom’s motivations for dressing my brother and I in identical gender neutral duds were 50% political, 25% paranoia that she’d lose us in a crowd and 25% efficiency.”

My Mom intentionally dressed my brother and I “gender-netural.” I guess that meant boy clothing, because for kids, usually boy’s clothing = unisex clothing. Language begins with the heterosexual male norm and defines subsequent categories as it relates to that “x” so that’s how that goes. My brother and I wore matching outfits, like the terry-cloth seperates we owned in red, yellow and blue! I wore sneakers, pants and t-shirts and eschewed anything frilly or flowery. I think my Mom’s motivations were 50% political, 25% paranoia that she’d lose us in a crowd and 25% efficiency. Exhibit A, my brother and I in t-shirts and matching sunglasses: 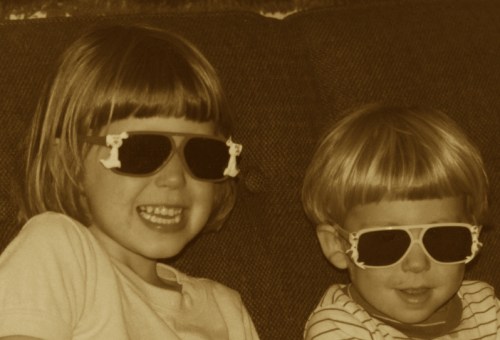 That being said, I’ve always had a boyish body and therefore gave up on women’s attire fitting me ages ago. I’m the average height of a man (5’10) and I’m not curvy, so I basically shop online where I can get “boyfriend cut” women’s pants sans hips with 36 inch inseams or men’s shirts in size XXS. Little boy’s clothing, alas, is generally too wide, although I find little boy’s underpants a godsend. Women’s business attire simply does not fit me. I can’t imagine a world with a unisex button-up shirt or unisex blazer. I think I just stopped expecting anyone to sell clothes I could wear, ever. I actually just looked down at what I’m wearing right now — men’s t-shirt, little boy’s underpants, and pajama pants I found on Alex’s floor. So there you go. Scavengers, the lot of us.

“But really, is there something inherently boyish about trucks or dinasours?”

I don’t find it difficult to dress my sons in gender neutral clothes, because really that just boils down to shirts without Hello Kitty or Spiderman on the front. I wouldn’t buy those shirts anyway because I’m allergic to character-based playwear. But really, is there something inherently boyish about trucks or dinosaurs? I don’t think so. When Slade wears a black t-shirt with a guitar on it, I don’t feel like he’s wearing a boys shirt.

The problem is when Eli actually wants a Hello Kitty t-shirt. I’m obvs dripping with progressive, gender neutral parenting, so I’d be fine with him wearing it — that’s not the issue. Unfortunately, most clothing with female characters are also cut differently and embellished with frills or glitter, which Eli isn’t interested in. I mean, that’s a girl’s shirt. The poor kid just wants to show some love for Ni Hao Kai Lan; he doesn’t want to wear a dress. So I guess the issue I have is why are some characters / things marketed to boys and others to girls? Why can’t shit just be shit for everyone to enjoy? 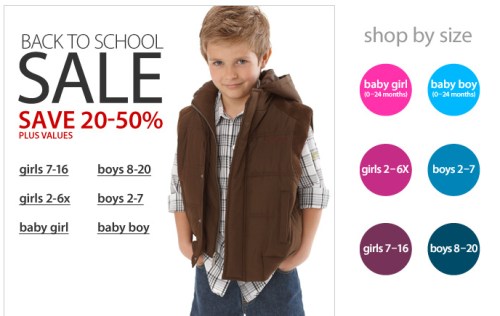 “Women’s fashion is geared more towards “femmy” type women, and I think that’s frustrating for a lot of us.”

It’s actually really annoying that clothes are gendered because the women’s stuff is always poorer quality and uglier than the men’s. Unfortunately for me, the men’s stuff doesn’t usually fit my body the way I’d like it to. Women’s fashion is geared more towards “femmy” type women, and I think that’s frustrating for a lot of us, as evidenced by the fact that we have all these style posts here on how to get men’s clothes to fit us. If designers made more unisex clothing, or made men’s clothing that fit me, that’d be nice. Also I think the questionably motived American Apparel makes some okay unisex clothing. 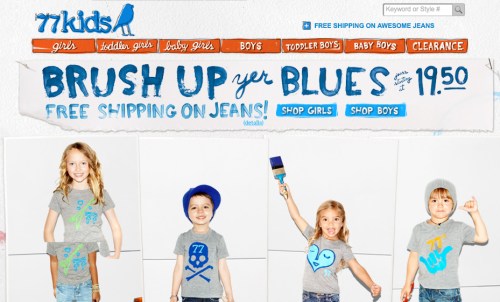 Actress/Model, Style-Blog Addict & co-star of In Your Box Office

While I think unisex clothes (in general) are super cool, I also really dig the thought of girls (whether they be young or old) wearing clothes made for boys. Call me crazy – but Shiloh wouldn’t be such a trailblazer if her duds were unisex.

“As far as success and attire, at my job at least, formal clothes are often conflated with ones that are gender-specific.”

I think that a lot of people hope that their babies will grow up to be the perfect man or woman just like they might hope for them to be a successful doctor or lawyer. I think it’s preaching to the choir to point out to you guys that for a lot of people, being a productive member of society means fitting nicely into male or female. As far as success and attire, at my job at least, formal clothes are often conflated with ones that are gender-specific. Yesterday a man asked me if I worked there because I was dressed so much more casually than all the other women. I was wearing wing-tipped oxfords, nice pants, a button down shirt, and a vest [yes, I just wanted to tell you all about my fly outfit]; they were all wearing dresses.

Social Worker, Birther of our Editor-in-Chief

Clothing is a reflection of societal norms, roles and mores. Much of this comes from the Bible (somewhere in Deutoronomy) where females are admonished to not dress in male clothes, and it’s just gone on from there.

When Ris was born I made a deliberate effort to dress her in yellow, reds and denim, which I considered gender-neutral colors, and also bright enough that I could spot her in a crowd. My Aunt Dorothy was convinced I/we was/were trying to raise her to be a boy. Her Dad and I were trying to raise her to be a person and selected clothes that wouldn’t show dirt easily and she could play in.

Up until puberty gender in clothes is determined by color and designs, such as “princess” vs. “football”, after that a lot of it is decided by body shape and size. Teeshirts? how about kilts?