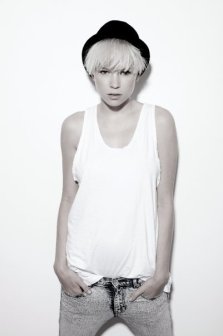 Why are we interested in the lesbian hipster? Partially, it’s ’cause she looks really, really cute on Facebook and you can’t stop lurking her pictures. But it’s mostly ’cause the “lesbian” and “hipster” worlds seem to have converged so naturally that there’s clearly something going on past Generation X/Y’s universal adoption of any westward-blowing trendwind.

Remember that time in the ’80s when power suits were all the rage? Of course you do, you’re a lesbian! Trends may come and go, but once in a star-crossed while, styles work their way permanently into various subcultures. Lesbian hipsters are one of the newer members of the already highly categorized girl-on-girl community, but within the lesbian subculture, does this “trend” have the power to outlast the shelf life of the mainstream “hipster,” just as power lesbians kept the power suits?

Despite its relative newness, the lesbian hipster style is almost ubiquitous in certain spaces, like Tegan & Sara concerts or The Abbey on a Friday night. So why does hipster jive so easily with lesbian? 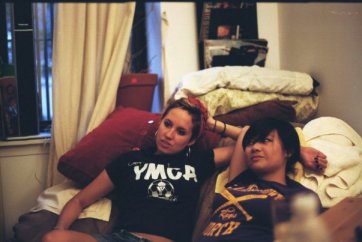 a lesson in hipster history

+
Hipstory, if you will. I know it’s hard to believe that all these thrift store shirt-wearing, gold lamé-legginged girls carry with them any sort of legacy other than ‘80s dance movies (Jennifer Beals, I’m looking at you), but the tale of how the hipster came to be is a history of histories. At the risk of unleashing some violent anti-hipster hatred from a movement which actually meant something — according to one legend, the great ancestor of the lesbian hipster is none other than the riot grrrl. Lesbians and hipsters look alike, they say, because hipsters have evolved from scenesters who were once emo kids, a phenomenon preceded by the re-emergence of punk, influenced of course by riot. 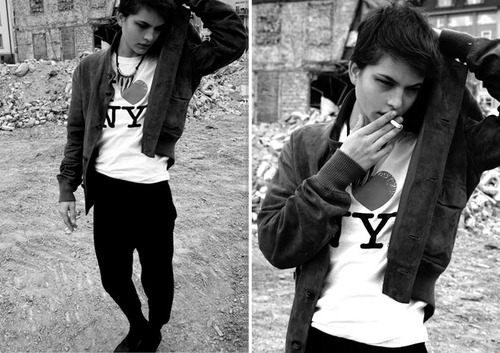 A more comprehensive look at the composition of typical hipster is recognizing it as a compilation of appropriated cultures, more specifically those that exist not only outside the mainstream, but as a rebellion against it.

“Oversaturation turns the outlandish into the normal and the DIY into the mass-produced.”

It’s all how we cycle “cool.” A subculture creates a style to distinguish itself from the mainstream. These subcultures usually arise from some form of societal oppression, and as women and gays, we are obvs all about oppression.

Once the style becomes distinctive as a symbol of resistance, dissent, or even difference, the mainstream reacts not in fear but instead by picking and choosing what can be reinterpreted and then marketed to the masses as trendy. Oversaturation turns the outlandish into the normal and the DIY into the mass-produced. Suddenly what began as dissent becomes a trend. This sort of appropriation of cultures allows us to buy the edginess of rebellion while bypassing the troubled history.

This edginess is the ‘trend’ — but when the trend fades from the mainstream, those with “genuine” ties to the ethos of the trend often continue on sporting it.

The lesbian hipster, we like to think, is more aware. 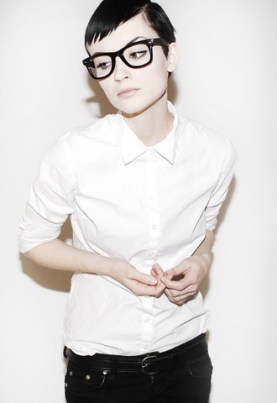 Despite the fact that, in my opinion, I walk around all day looking like a big giant lesbian with the ability to wear a bandana at least six different ways and a haircut whose tell-tale asymmetry can be spotted by even a novice, I still unintentionally pass as straight. Not just in the way that everyone assumes everyone else’s heterosexuality, but in the way that I can wear a tie, use the word “girlfriend” non-platonically, and still be actively pursued by men.

Perhaps this is due to my extraordinary good looks. But most likely this is due to the fact that hipster style tends to be androgynous. Aside from the ironic mustache (most of the time), most hipster trends are suited to fit both guys and girls. What was once “boys in girl pants” has now just evolved into “skinny jeans,” and any clothing items once sized large enough to fit only men have been shrunken down to skin tight. Hipster seems to be functioning as a third gender in fashion.

It’s not uncommon in many non-Western cultures to recognize third or multiple genders in society, although it makes our government and health care system very uncomfortable. While the third-gendered peoples are generally accepted in these societies, and often were revered as oracles, this acceptance tends to come at the price of their sexuality. Basically, in order to avoid that whole confusion over reproduction and gender binaries and such, these individuals are generally regarded as asexual. 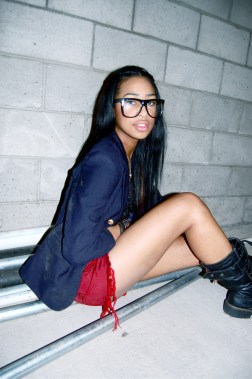 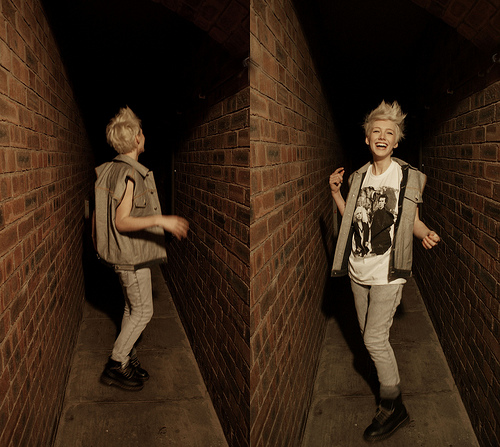 +
As we have seen, empirical research has proven that the hipster lesbian is typically perceived by straight men as “just an edgy straight girl” and by straight women as “that cute lesbian I would totally go gay for.” And that’s all fine and good for walking around all hipster-cool, but what does it mean in the world of lesbian?

“However, dressing like Tegan and Sara does not a trendy lesbian make.”

Once again, we’ve got Tegan and Sara to thank, maybe not exclusively, but definitely largely, for making the lesbian hipster cool. Always appearing with swoopalicious bangs, ankle-choking jeans, and trendy t-shirts, the girls made lesbian hipster not only acceptable, but also attractive. However, dressing like Tegan and Sara does not a trendy lesbian make.

Because let’s face it, y’all: hipsters are sometimes ridiculous. Take it from someone who has actually been turned down for being “just too hipster”: not everyone’s into it. This is potentially because hipsters, like members of any fashion culture or subculture, have the tendency to flock together, which has the danger of breeding a culture of exclusivity. Luckily, the queer girl community holds a stronger bond than the hipster one does, allowing the lesbian hipster to socialize freely among other lesbians. In fact, her obvious appearance as a lesbian may even draw in girls who can easily recognize her – she just shouldn’t expect to pick up all of them. 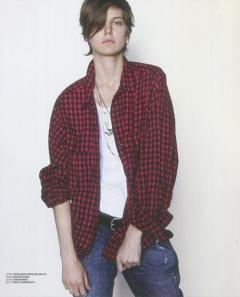 To illustrate this, I present the separate histories of the lesbian three-piece suit: a plaid shirt, a bandanna, and skinny jeans.

+
Don’t you go around calling this lesbian staple your “lumberjack shirt.” Unless, of course, you are a lumberjack, in which case you would probably just call it your shirt. But believe it or not, plaid was once so controversial that English authorities banned the print after the Scottish rebellion in the late 1740’s. Yes, before becoming offensive, Mel Gibson taught us in Braveheart that plaid means business. More recently, you oughta know that plaid shirts were donned by women’s libbers in the ’60s, proving you don’t need to be a man to wear a button-down.

+
Bandanas are so gay that Peaches wrote a song about them. “Hanky Code” poetically weaves the tale of a system of colored handkerchiefs used by gay men in the ‘70s to indicate their sexual preferences and fetishes. And even though bandanas have gone fairly mainstream as a fashion item and are now popular lesbian trademarks, you probably still shouldn’t casually walk into an S&M workshop with a bandana hanging out of your back pocket. Other than that, you go for it, lesbian hipster. 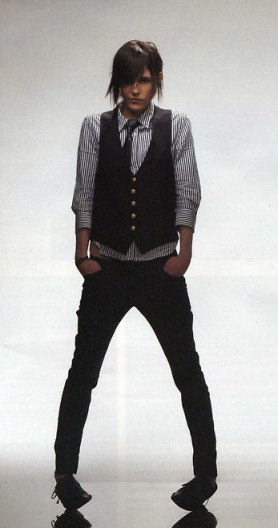 +
Super-tight straight leg pants, worn notably by sex symbols and rebellious icons Elvis Presley and James Dean, made it big in the 1970s underground punk scene. The pants’ popularity stayed alive through the decades, persisting largely through other music scenes. And although skinny jeans were once – and still are – the choice pants of rock stars and those looking to fight The Man, they have now joined the ranks of the lesbian subculture so that we, too, can experience the awkwardness of trying to hook up, having trouble getting your skinny jeans off, having to hop around the room removing them from your ankles, and finally end up with a pair of inside-out skinny jeans on the floor. Holla.

+
So does the lesbian hipster really exist, and if so, what is her place in the queer girl community? She’s a different kind of lesbian, paying tribute to the subcultures that came before her. Or maybe she’s just a girl who thinks solid-colored v-neck t-shirts maker her look hotter than any other kind (she’s correct).

Androgynously sexy and dykey but not quite butch, the lesbian hipster creates its own categories by falling in between older ones. Hipsters get their clothes from lesbians, and lesbians get their clothes from hipsters; maybe this means there are no lesbian hipsters or even hipsters at all, there are just lesbians, and straight people who dress like them.

We invited the lesbian hipster over, and now she’s here to stay. Perhaps for tea, preferably something trendy like rooibos out of a thrifted 4-H mug. We won’t even kick the lesbian hipster out the next morning. In fact, maybe she can move in. Maybe we can get a cat and name it something like Jane Lynch, or Shane Jr.

“The lesbian hipster style provides for us the perfect outlet for androgyny, which we all already know to be sexy. It’s a middle ground of gender – androgyny is hipsterdom’s gift.”

But really, much to the grievance of heterosexual hipsters, the look will pass. Autostraddle predicts that for gay ladies, however, the trend will stay. It’s the same reason we want the lesbian hipster herself to stay. These trends are giving queer girls what we’ve always deserved: to be hot…on our terms.

The lesbian hipster style provides for us the perfect outlet for androgyny, which we all already know to be sexy. It’s a middle ground of gender – androgyny is hipsterdom’s gift. We can still be girls without having to be too girly. It’s like in the ‘80s when women in the business world adopted power suits, and even when they went out of fashion, lesbians kept them (‘sup Bette Porter). They weren’t our access to power, but they were a sign of our empowerment.

Such is the case for today’s hipster. Dressed once in full hipster clad for church (a different story entirely), my mom told me that I had to change so I could look like a girl. Well, now thanks to hipsters, we don’t have to take it when our moms tell us to look like girls. We already know we’re girls. Nay, we are women (womyn?), and we are so hip and so cool that we don’t need frills or poofs or heels or however they’re selling femininity to us these days. The lesbian hipster is confident; she knows who she is and what she wants, and she’s wearing her little gay heart on her plaid sleeve.