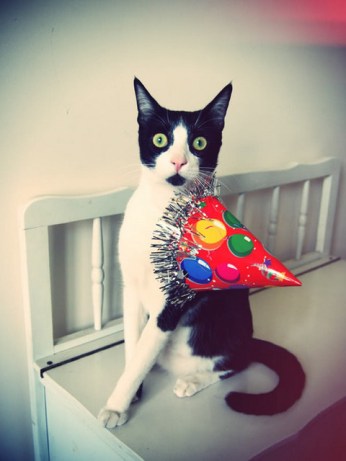 Only time will answer these questions, so today let’s focus on what we did and what we wanna do. For the record, 2012 was the most amazing fucking year ever, thanks to you and you and YOU, and we’re so excited for 2013’s redesign (and Alex Vega’s ass tattoo, duh) that we can hardly stand it!  Some of us on Team Autostraddle are the kind of people who don’t really do resolutions, and some of us make new resolutions every week and write them on our walls with Sharpies. Here’s what’s in our hearts on this final day of 2012 — things we’re resolving and things we’re leaving behind.

“My resolution for 2013 is to be a ball of sunshine.”
– Riese, Co-Founder and Editor-in-Chief

“I suddenly realized in 2012 that everything I’d already done was over, and that today would be over by tomorrow, and while that sounds really melodramatic, it’s actually super exciting and liberating, like I can finally freak out about being alive every day. So to celebrate, each day I’m going to take two pictures of these amazing weirdo people in my life — one in the morning and another at night — and then turn those into a (probably expensive) book at the end of the year. Even when we’re dirty or grumpy or broke or tired or maybe so happy we could melt, I’m going to take a picture of us. I want to remember it all.”
– Laneia, Executive Editor

“This year I resolve to find a happy medium between the persona I have when I am single and when I’m relationshipped.”
– Naimah, Intern

“I want to get my handstand without a spotter.
I don’t mean I want to get a perfect handstand or get a handstand for very long without a spotter. What I mean is I want the courage to put myself in an upside down position without anyone to catch me if I fall. When I ask people who have really lovely handstands how long it took them to get there, the answer is usually somewhere in the range of 4 – 7 years. I’m only on year two. But I can get my toes off the wall about half the time. And basic, tiny, just about insignificant but measurable concrete actions are the way to spectacular, grand, really amazing lives, skills and stories. Perhaps my New Years Resolution is about the ongoing process of learning that everything is an ongoing process. Or maybe it’s just about a handstand.”
– Ali, Contributing Editor

“My biggest resolution is to get better at cooking so I make more food at home, because eating out in Boston all the time is just too expensive. I will possibly do this with the aid of the many Get Baked articles I’ve bookmarked.”
– Rose, Contributor

“My New Year’s Resolution is to become better about time management and stop fucking procrastinating everything and becoming a lunatic at the last moment and crying into my pillow when things aren’t working because I’ve left them to the last moment. But for real real this time.”
– Hansen, Contributing Editor

“My resolutions for the new year are to go to bed before 4am on weeknights and also to learn to code, which I think directly conflict with one another but January 1 is all about unrealistic goals & expectations so it’s fine!”
– Vanessa, Contributing Editor

“This year I’m looking for motivation, for reasons instead of prohibitions. Because, seriously–how much could I do if I just let myself?”
– Kenzie, Intern

“My resolution for 2013 is to put greater effort into socialising and making new friends.”
– Crystal, Music Editor

“My resolution for 2013 (and 2012 and 2011) is to finally organize all of the files on my computer rather than continuing to leave everything in my 728GB ‘Downloads’ folder, sorted into subfolders with names that no longer have any meaning to me (e.g. ‘that-onetime4’, ‘NEVERAGAIN’, ‘ghostmouse’).”
– Geneva, Intern

“My New Year’s resolution is to remember to breathe, and shake the dust.”
– Daniela, Intern

“My resolution is to be more consistent in my yoga practice. I’ve been doing yoga since I was 13 (I am now 21) and although I can do quite a few advanced positions, I still have problems with inversion (hand stands and shoulder stands). My goal this year is to be able to do a handstand.”
– Devin, Intern

“In 2013, I resolve to stop putting everyone else’s needs in front of mine and remember that I’m important too.”
– Chelsey, Intern

“Resolution: Go femme.
Okay, so I don’t actually believe that one can merely “go” butch or femme–you are what you are, and what I am is an androgynous weirdo. But I realized earlier this year that my androgyny really isn’t 100% organic, not-from-concentrate androgyny unless I’m willing to embrace a traditionally feminine aesthetic with the effortlessness that I embrace the masculine and gender-neutral ones. I never really learned how to apply eye shadow or French braid my hair as an adolescent. Turns out, this is a great thing! In 2013, I’m finally going to explore what it means to be femme on my own queer terms of service instead of those laid out by Seventeen Magazine and my peers.”
– Fonseca, Contributing Editor

“I’m gonna stop letting people who posture on social media get to me.”
– Brandy Howard, Julie & Brandy In Your Box Office

“I vow to schedule Skype sessions, dinner dates and letter writing evenings to stay in touch with friends. I will resist the urge to cocoon and cut myself off from the world whenever it gets cold. (And maybe re-learn how to ride a bike. Shhhhhh).”
– Kristen, Contributing Editor

“My resolution is to eat more protein and stop being such a silly ball of anxiety all the time.”
– Kate, Contributing Editor

“In 2013 I’m going to try to let go of my fears of putting myself Out There and will try to take more risks that have unknown outcomes.”
– Gabrielle, Contributing Editor

“My number one goal for 2013 is to leave the house — both my physical apartment and the metaphorical familiar — more. 2012 was a year of staying at home in yoga pants. 2013 will be the year of going places (mostly) fully dressed.”
– Carolyn, Contributing Editor

“My resolution is to read more books that I actually hold in my hands.”
– Brittani, Contributing Editor

“I resolve to be a better girlfriend. And also to quit smoking, but first I’ll start smoking.”
– Bren, Editorial Assistant

“For most of 2012, I lamented on those who did me dirty. I waxed melodramatic on family members that betrayed my trust and dropped me for something better, cooler and easier to understand. I mourned the loss of a friend that lived on this earth the way constellations live in the galaxy: shining, connected and in symbiotic relationship to the past and the present. I watched as my connections to people and love itself imploded. Regurgitating what had happened, with who and how sad I was about it became my fucking way of life. Boohoo, bitches. I’m so very done with all of that. My New Year’s resolution is to fully embrace those around me who are honest and walk with love. I want to praise and support those who show me love & affirm all the good shit about living in this world. In that vein, I will end my mourning and switch it out for some good old fashioned remembrance and look to my friend for guidance. Basically, I want to give a continued shout out to the good shit, not just as a resolution but as a new way of life.”
– Gabby, Writer

“I don’t usually do New Years resolutions, but I’ve been realizing how little I read now and it’s making me want to cry. My Netflix consumption, however, is as horrifyingly excessive as ever. SO. In 2013, I’m hoping that at LEAST half the times I’m tempted to watch some old Gossip Girl or Futurama, I will instead start one of the five thousand books I’ve been meaning to read for ages. Wish me luck!”
– Rebecca, Intern

“Until 2012, I remained convinced that I had my life figured out. I was wrong. I hated 2012. I felt stuck the entire time, and after a year of seeking out “honesty” in my own relationships (last year’s crappy resolution) I realized if we were gonna be honest I had to give up on something, and so I did: I gave up on expecting shit, and I gave up on planning the unplannable. All I really want is to be free. To stop micro-managing. To stop drowning in it all, to take pauses, to escape, to chase every shred of joy until I’ve stashed enough for a lifetime.

In 2013 I will not pretend to have a plan. And I’m really excited to see how far it gets me.”
– Carmen, Contributing Editor

“On January 1, 2013, I’m going to make a movie out of one-second clips that I will record once every day. I’m making this my project because I supported a Kickstarter for an app that will make it possible to do this. It’s called the “1 Second Everyday App,” created by Cesar Kuriyama who, when he turned 30, started recording one second every day and made this video from those clips which I think is so neat.”

“I resolve to take a carpentry class in the new year (this is part of a multi-year goal to be more like Marni!).”
– Carrie, Editorial Assistant

“My new year’s resolution is to make more noise. Or rather, to MAKE MORE NOISE.”
– Cara, Contributing Editor

“One thing I want to leave behind forever is being embarrassed about having feelings/being a human instead of a robot. This year I found myself saying to someone “I’m not any less rational or with it when I’m upset or crying. Please don’t make me feel guilty for having strong feelings about something,” and it felt really good? I think I want to start saying that more often, to myself and to other people.”
– Rachel, Senior Editor

“Work outside of my house at least 2 days a week.”
– Laura, Associate Editor

Ok your turn! Tell us all your feelings about 2012, all of your hopes for 2013, and all about your New Year’s Eve celebrations.