As the leaves change, and the wind picks up, and our thoughts turn to pumpkins, I’m reminded of one thing – this election season is long. We’ve survived two conventions, endless gaffes, and Dem Invisibility. We’ve celebrated, we’ve laughed, we’ve cried, we’ve danced.  We’ve planned (and failed to need) Dinner with Barack outfits for three separate seasons, and gotten carpal tunnel from deleting coquettish, excessively bolded emails from liberal celebrities. But as I start to burn out, the most dedicated among us just burn hotter. Take Mitt Gets Worse, for example – for months, they’ve made it their mission to chronicle Romney’s backwards LGBT agenda, and they’ve only started bringing in the big dogs this week.

Since we last checked in with Mitt Gets Worse, they’ve drafted a letter to the Log Cabin Republicans urging them not to chuck their wood behind the Romney/Ryan ticket, and drummed up tens of thousands of signatures for it (the LCR has not endorsed Romney/Ryan so far, although probably not because of the petition, which LCR executive director R. Clarke Cooper implied went “right into [their] spam filter”). They’ve put together a thought-provoking video compendium about the resignation of Richard Grennell, the former Romney staffer who quit after his sexual orientation caused a right-wing fringe group firestorm that the campaign failed to put out. And they’ve added several videos to their oral history project – one from actor Anthony Rapp, who reminds us of Romney’s tendency to drag kids along as he moves backwards:

“As an actor, over the years I’ve had the privilege of meeting many young people who have shared with me their stories of struggle and triumph as they’ve fought to be recognized for who they are, to live openly and freely as LGBT Americans. Massachusetts had been a state that had been on the forefront of empowering LGBT youth, providing programs and services to them. Mitt, through executive order, abolished the LGBT youth commission.” 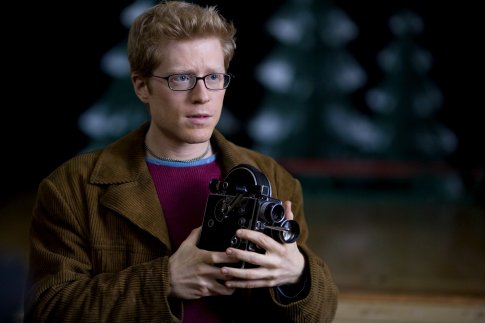 And one from Danny O’Donnell, the first openly gay man to be elected to the New York State Assembly and the person responsible for the state’s Marriage Equality Act. O’Donnell recalls looking to Massachusetts for inspiration while writing his landmark anti-bullying bill, and wishing he hadn’t:

“I was very distressed to learn that Governor Romney refused to send out a booklet to schools because it included protections for transgender children . . . if we elect Mitt Romney, my life will get much worse.”

On Thursday morning, the group unveiled its most high-profile oral historian yet: Massachusetts Representative Barney Frank.

Frank is one of the most prominent gay politicians in America, with political and personal experiences that make him uniquely qualified to judge Romney’s record on LGBT rights. Frank founded the National Stonewall Democrats, a grassroots network that connects Democratic LGBT activist groups across the country, way back in 1999 (before it was cool!). He regularly sponsors civil rights-related bills, and consistently earns downright nerdy voting record scores from the ACLU, the NAACP, and the HRC.  Now he’s enjoying the fruits of some of his labors – he was the first openly gay congressperson, and he recently became the first openly gay-married congressperson as well, when he tied the knot with longtime partner Jim Ready earlier this year. Frank’s three decades of involvement in Massachusetts politics have brought him into contact with Mittsy several times – in the video, he remembers watching Romney claim, during the 1994 senatorial election, that he would be “better on LGBT rights than Ted Kennedy.” Ten years later, after the same-sex marriage bill passed in Massachusetts, Frank saw Romney do this instead:

“[Romney] put all of his political energy . . . into trying to defeat state legislators who were not opposing same-sex marriage. He singled out particularly some women, and frankly particularly some Roman Catholic women, and tried to defeat them on the grounds that they were not opposing same-sex marriage. And it was a very vigorous campaign; of all the time he was in Massachusetts I saw more energy out of him then until the health care bill, which he of course now repudiates.” 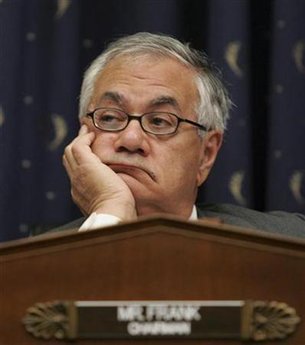 BARNEY FRANK IS TIRED OF ALL THIS NONSENSE

Romney also ignored Frank’s attempts to reach him when Frank was sponsoring the Employment Non-Discrimination Act in 2007 (although Romney supported ENDA during his 1994 “better-than-Ted” days, he’s since decided to let the states figure out whether or not you can get fired for, you know, quietly being yourself).

Most of the Mitt Gets Worse videos focus on things that Romney has already done – coldly tell Julie Goodridge that he “didn’t care” what she told her daughter about why her parents couldn’t get married, for example, or flip positions like a gasping fish. As November 6th draws near, though, the project has started to focus on what Mitt might do if elected. The data indicates a clear downward trajectory, from bad to worse to what Frank deems “worser,” but where exactly does it lead, and what does it hit on the way down? Frank predicts three specific actions Romney could take that would push us backwards on LGBT rights. Although Frank is experienced and knowledgeable, he’s also notoriously blustery and his verbal high-kicks sometimes leave him with a foot in his mouth, so it’s worth it to go through his predictions and see how likely they are. 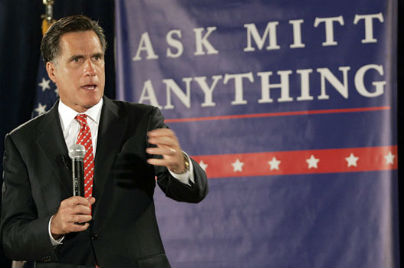 First off, Frank says Romney “might very well reinstitute Don’t Ask Don’t Tell.” The Boston Globe points out that although Romney didn’t agree with DADT’s rescission, he has said that he wouldn’t reinstitute it – “I’m not planning on reversing it at this stage,” he told The Des Moines Register last December. Ryan recently said something similar, telling a Florida TV station that “the issue is past us . . . and we need to move on.” But it’s worth pointing out that other top Republicans, like Ohio representative and Republican Study Committee chair Jim Jordan, support reinstating it, and – as the Grennell incident makes clear – Romney has not always been able to stand up to his own party.

Next, Frank predicts that Romney “would certainly appoint Justices of a Scalia sort . . . and much of our progress comes through the courts. Mitt Romney being elected means that the Supreme Court would be, for the immediate future, shut to us.” If given the chance, Romney would definitely elect a conservative Justice – he even signed a NOM-authored pledge about it – but whether he’ll actually get that chance is uncertain, and will remain that way unless someone figures out how to read Ruth Bader Ginsburg’s mind. 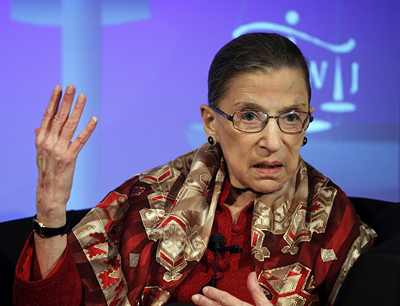 Finally, Frank points out that Romney “is in favor of a constitutional amendment that would not only prevent future marriages… it would invalidate the current ones.” Romney indeed opposes same-sex marriage, and supports a constitutional ban – it’s on his website, it’s in the Republican Party platform, and it’s something he has consistently told pretty much anyone who asks.  Ryan’s with him on this one, too, and as recently as four days ago told a Cincinnati audience that traditional marriage is “an American value, a universal human value,” just like “family and entrepreneurship,” and, presumably, lying about absolutely everything.

So that all looks like fun.  But to me, Frank’s specific predictions are less interesting than his general insights into Romney’s motivations. Frank points out that “it’s kind of hard to accuse Mitt Romney of misrepresenting his positions, because he clearly doesn’t have any . . . there is not an issue of public policy (except that rich people shouldn’t pay much in taxes) on which he’s shown any consistency.” Frank’s not saying anything new here – there are memes, items of clothing, and even Fox News articles about Romney’s little switcheroo problem.  His own staffers and confidants are finally owning up to it, too, and they seem to think it might be what scuttles him:

“[Romney’s] past willingness to change or shade his views for apparent political advantage resulted, over time, in one of his biggest political vulnerabilities. One close confidant said Romney sees the process like buying a company from a reluctant seller: Just do and say what you need to do to get the deal done, and then when it’s done, do what you know actually needs to be done to make the company a success… this do-and-say-what-it-takes tendency is reflected in his constantly changing message… Romney is cautious by nature, which paid off in business. But in politics, rather than chart a bold course and stick with it, he winds up trimming and dodging in ways that, cumulatively, sink in with voters.” 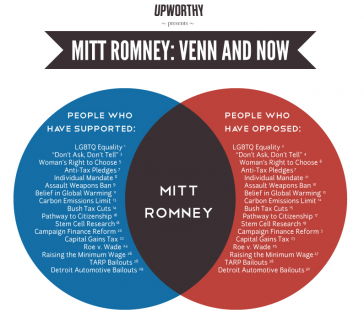 In his own mind, and to his most fervent supporters, maybe Romney is like Mulan, or something – lie as much as you need to in order to get in the door, and then let that down that gorgeous hair and save the world. The ends justify the means, and all that (it is a pretty strong indictment of the American political system that I’m finding myself able to consider this an argument that is worth typing up, but that’s life). A few people I know (and a misguided group or two) have used this logic to justify supporting him – “oh, he won’t really take away anyone’s rights,” they say, “and he doesn’t really hate gay people!  He’s just saying that stuff to get votes.  All he’ll really do is fix the economy.” Then they pat me on the head and go get married in all fifty states. But they are missing the point, which Frank makes, eloquently, via a comparison to George Wallace, the famously pro-segregation 1960s Alabama governor:

“I’m not sure that George Wallace hated black people and I don’t know that Mitt Romney really dislikes lesbian and gay people.  They were both consumed by ambition and willing to trash minority groups and appeal to prejudice against them for political advancement… [Romney] is a man who has no principles, obviously, on this subject… it is clear that he attaches no independent value to our rights and our issues.  He will trade them off.  And while I hope that the Republican Party will emerge from this right-wing death grip that it now suffers, I don’t see that happening right away, so the prognosis is that he will get worse.” 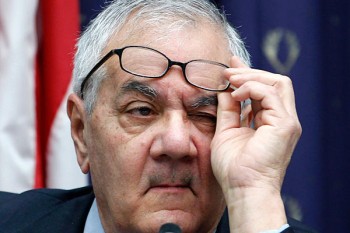 Maybe Romney won’t reverse or block groundbreaking pro-LGBT legislation.  Maybe he won’t get the chance to elect a new Supreme Court justice, and perhaps he’ll be too busy installing power windows in Air Force One to remember to invalidate about 600,000 legal unions, and prevent new ones.  And yeah, he probably doesn’t hate us (unless we’re part of the 47%, or have “wrong”-looking hair).  Hate is too strong a feeling; it takes too much energy.  He just doesn’t care!  He’s already trading us off.  And if it gets worse than that, I don’t really want to see it.