If you’ve so much as glanced at the news in the past 24 hours, you’ve probably heard that Paul Ryan is basically the most exciting thing to happen to the Republican party since Ronald Reagan. After a summer of what the National Review called “an audacious experiment to see if it’s possible to run a presidential campaign devoid of real interest”on the campaign trail, the announcement of Romney’s running mate has finally put some wind in the GOP’s sails.

Paul Ryan is currently the representative for Wisconsin’s first congressional district, and is serving his seventh term in the House of Representatives. He’s best known for introducing a radical budget plan in 2008, 2011 and then a similar one in 2012 which he called “The Path to Prosperity” and which many refer to as “the Ryan budget.” It proposed privatizing Social Security, ending Medicare, and restructuring the income tax. Ryan also describes himself as being deeply inspired by the writings of Ayn Rand and Objectivism; Ryan’s interns and staff are all required to read Rand (although Ryan denies being an Objectivist himself, claiming that as a Catholic he rejects it because of its atheism).

Paul Ryan is the kind of leader many Republicans had hoped to see emerge a year ago when the first candidacy announcements starting coming in. Instead, they chose Romney — a presidential hopeful who, up until now, has been viewed as little more than a lesser-of-two-evils option for the economically conservative voter — out of a field of lackluster candidates. Romney, when introducing Ryan on Saturday, mistakenly referred to him as “the next president of the United States.” Though he quickly returned to the stage to fix his blunder (“Every now and then I’m known to make a mistake. I did not make a mistake with this guy. But I can tell you this. He’s going to be the next vice president of the United States.”), Romney gave a glimmer of hope to a Republican base who’d all but lost faith in his cautious campaign. 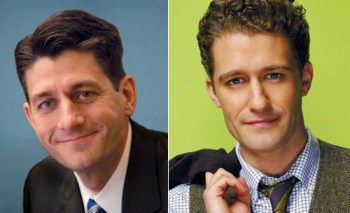 It’s Ryan’s particular brand of cheerful but unyielding politics that’s re-awakened enthusiasm among Republicans. Some attribute his energy and charisma to the generation gap separating the 42-year-old Wisconsin representative from his senior running mate, while others attribute it to Ryan’s hard-working attitude and self-made success. He’s been called an “intellectual leader” of the party by Romney and a “thrilling” addition to the race by both camps — Republicans because they now have an economic superstar who’ll put stats and budgets to the vague promises Romney’s made and Democrats because they now have someone making concrete claims that they can challenge.

It’s not just Ryan’s knack for laying the GOP’s plans out on the table that has Democrats excited. Some liberals can’t help but see Romney’s choice of such a solidly right-wing running mate as a desperate move by a campaign that’s rapidly losing ground. To them, only a candidate who’s resigned himself to a loss would do something as crazy as chose an ideologue as a vice president. But Salon‘s Andrew Leonard isn’t ready to break out the victory whiskey just yet. He’s more concerned about what the reality of a Romney/Ryan-led country might look like and what it means that their partnership has drawn so much support.

Because really, all this talk about Paul Ryan being a revolutionary is maddening. A revolution requires change; it creates progress. What Ryan wants is a giant time machine that’ll take us back to 1932. Ryan’s budget would end Medicare in favor of a voucher system that would remove “lowering healthcare costs” from the national to-do list and place that responsibility on citizens. It would eliminate over 1 million Pell Grants, the largest source of federal financial aid for college students, over the next 10 years. On top of cutting aid to low-income people and families, his plan would restructure tax brackets so that those same people would be hit the hardest. Ryan’s budget plan was even attacked by the United States Conference of Catholic Bishops, the faith to which Ryan himself belongs, because of its zeal for leaving the poorest and most vulnerable out in the cold.

At a time when charities are strained to the breaking point and local governments have a hard time paying for essential services, the federal government must not walk away from the most vulnerable. While you often appeal to Catholic teaching on “subsidiarity” as a rationale for gutting government programs, you are profoundly misreading Church teaching. Subsidiarity is not a free pass to dismantle government programs and abandon the poor to their own devices. 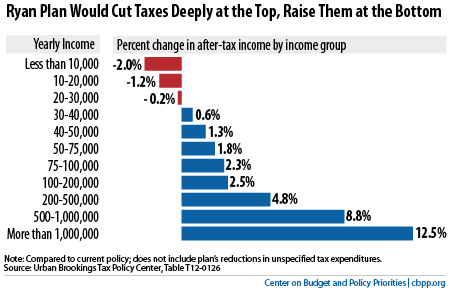 via: off the charts

Lest you’re tempted to buy into the hype about Ryan being a “true conservative,” let’s just make it clear that his beliefs about a small federal government only stretch so far. He’s voted in favor of most anti-choice legislation, the Protect America Act and a Constitutional amendment that would criminalize flag burning. Though he’s received support from the GOProuders, he’s done little more than vote “yea” on an early version of ENDA to deserve it. Twice, in 2004 and 2006, he voted in favor of a federal amendment banning same-sex marriage. He voted in favor of a bill that would prohibit federal funds from being used to fight DOMA (while allowing that same money to go towards upholding it), against the repeal of Don’t Ask Don’t Tell and against the Matthew Shepard and James Byrd Jr. Hate Crimes Protection Act. 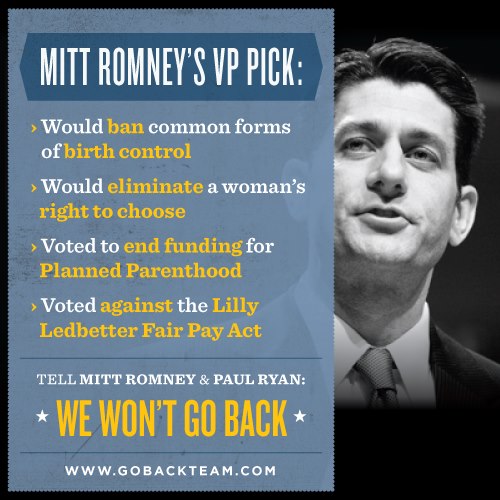 Ryan’s policies alone are disconcerting, but the branding of the Romney/Ryan partnership as “America’s Comeback Team” reveals a troubling lack of understanding about where the real power in America lies. Which is, of course, with money, with privilege, and with normativity. No matter how many articles you read about how bold or radical Paul Ryan is or how daring Romney is to choose a firebrand politician, he’s still a pretty safe bet. He’ll get votes. Some people will vote for Ryan simply for his economics, writing off his voting record on civil liberties because they’re “not single issue voters.” They’ll fail to consider that the luxury of treating social issues as secondary means that they’ve got it pretty good. Ryan’s not interesting or dynamic or new; he’s a powerful man who knows how to wield his influence. Let’s hope (and vote!) that we end up with more than that for the next four years.