I’m always interested to hear from queer Republicans. Trying to understand how someone can reconcile two identities that seem so contradictory to me tends to be a worthwhile mental and empathetic exercise. So when I saw that a bunch of queer attendees of the Republican National Convention had decided to talk to some cameras, I had to press play, and then I had to ask myself why I pressed play, and then I had to get a glass of water to calm my nerves, and then I had to figure out what the heck these people are doing and let you guys know about it. Autostraddlers, meet GOProud’s newest attempt to rationalize voting their own rights away.

Buzzfeed filmed this video outside a GOProud-sponsored RNC dance party called “Homocon” (thus the neon, which was notably absent from the rest of the convention).  GOProud was founded in 2009 by Christopher Barron and Jimmy LaSalvia, both of whom are in the video — Barron’s the one who is “married to a man in Washington D.C.” and LaSalvia is the one who “happens to be a pro-life social conservative” (if that’s true, he’s the only person with genetically determined political beliefs). The group bills itself as “a national organization of gay and straight Americans who seek to promote freedom by supporting free markets, limited government and a respect for individual rights.” 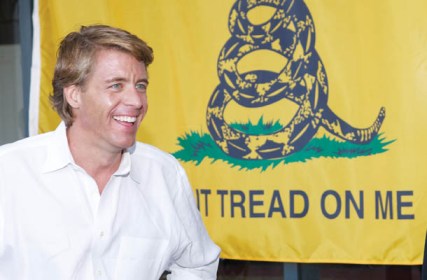 JIMMY LASALVIA INVITES REPUBLICAN PARTY TO TREAD ON HIM

This is pretty standard so far, but GOProud takes it farther. As of right now, it’s also the only national gay group to have endorsed Mitt Romney. The Log Cabin Republicans, despite participating in the party’s platform drafting process, were unhappy with the end result, especially “the obsessive exclusion of gay couples . . . from the rights and responsibilities of marriage,” and have so far declined to endorse any candidate. The newly launched Young Conservatives for the Freedom to Marry, who attempted to sway the platform committee in early August with a letter emphasizing how marriage equality aligns with Republican ideals (including “more individual freedom, personal responsibility, and the importance of family”), and citing the public’s increased support for the idea, were also disappointed and have withheld official endorsement.

So what makes the GOProuders different?  Why is each one able to look into the camera, show his shiny teeth, and in one breath espouse his support for gay marriage AND his intention to vote for a candidate who signed a NOM pledge? I watched the video over and over again, did some supplementary research, and tried to figure it out. My first theory was that they, like Zen masters or preteens, have a unique ability to hold two contradictory ideas in their heads at the same time – any pro-lifer who also “wants government out of peoples’ lives” must be great at this. Indeed, many of their statements sound like unparsable koans (“I’m a conservative and I share my conservative values and principles with others in the conservative movement”; “I think the government should stay in the government”; “what is the sound of one Mitt clapping?” (fine I made that last one up)), or topic sentences from that middle school paper you wrote on the bus (“being conservative means a lot of things, you know”).

Then I thought maybe they believed that Romney, who has continuously yo-yoed on social issues during his political career, will swing forward on this one again – LaSalvia has called the Republican platform “a meaningless document,” and board member Lisa De Pasquale said there were more people at the Homocon party “than will ever read [it].”  The idea that anyone gung-ho enough about a political party to attend a convention would be willfully unaware of that party’s plans is scary enough. The idea of gay people dancing happily from Homocon to the voting booth without reading what they’re signing feels like Soylent Green-level treachery. 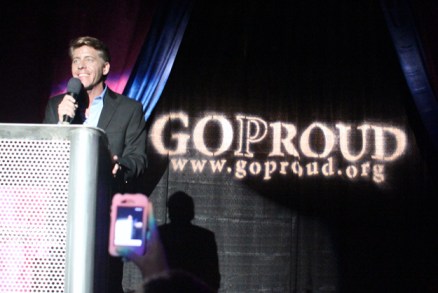 LASILVIA IGNORES SHADOW OF A DOUBT

In the end, though, it seems that the people of GOProud, like many other gay conservatives, consider their partial blindness a matter of priorities – a kind of martyrdom of civil rights for the sake of economic well-being. “For far too long,” said LaSalvia in his Romney endorsement statement, “the gay left in this country has been allowed to dictate what they believe qualify as “gay issues.”  We think jobs, the economy, healthcare, retirement security, and taxes are all “gay issues.”” According to the “Beliefs and Tenets” on their website, reducing the size of government will “improve the daily lives of all Americans, but especially gay and lesbian Americans” – privatizing Social Security will “give gay and lesbian couples the same opportunity to leave their accounts to their spouses as their straight counterparts.” Leaving the gay marriage question to the states will ensure that the federal government can’t outlaw it (although this isn’t actually Romney’s position, and Senator Orrin Hatch recently got in some trouble for disagreeing with him on it). “Protecting the rights of parents to homeschool their children” will do more to stop bullying than any sort of federal initiative. These arguments overreach themselves (to leave your money to your spouse, you need to be legally allowed to have one), deny vital historical precedents (see Loving vs. Virginia), or just make any sane person’s heart hurt (“They’re making fun of little Jimmy?  Well, better keep him in the basement.”). And the core belief that drives them, that minorities can possibly benefit from a government that ignores them, is wishful thinking at best and unforgivably backwards at worst. It’s really only ever espoused by people who have been lucky enough to be born into a societal position where they will be ok if they’re left alone. I’m not saying I want the government in my bedroom, but I do want them acknowledging that I exist.  If the people of GOProud were truly proud, they’d want the same thing.