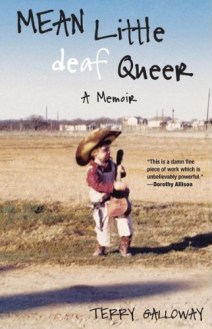 Jay-Z once said “When they got you in the mag/ for like half a billy/ and your ass ain’t lily/ white that mean that shit you write/ must be illy.” What I’m trying to say is that I first heard about how good this book is from a source that’s not even queer, so it must be fantastic if even straight people are paying attention. Also, Dorothy Allison (Bastard Out of Carolina) called it “a damn fine piece of work” and I’m in love with her, so. Experimental antibiotics given to Galloway’s mother during her pregnancy caused Galloway to be born deaf, and good fortune caused her to be born queer. I don’t know why she’s such a good writer, or hilarious, but I’m not going to complain about it. Galloway’s dark (but funny!) memoir chronicles her life with disability and a lesbian identity, and explores her connection to theater, drama and art. I have the feeling she is going to turn out to be the next Augusten Burroughs, I dunno. I’m definitely going to read her book though!
+

The Creamsickle, by Rhiannon Argo

(Spinsters Ink)
You guys! Rhiannon Argo read a portion of this to me out loud, in real life. There were a lot of other people there too because it was part of a Sister Spit tour, but it was still really great. Anyways I am 110% positive that this is the best way you could possibly spend $11.21 on Amazon because it’s going to be amazing: it’s San Francisco and skater bois and genderqueer and Chicana dykes and Rhiannan Argo is essentially a perfect human being. Having met the incredible women of Sister Spit, I know that they are all broke. Consider picking up a book so they can afford fancy booze for the road!
+

This One’s Going to Last Forever, by Nairne Holtz

(Insomniac Press)
My first thought was that the cover of this looks exactly like something I would have wanted to read when I was fifteen. I still read the same kind of books I did when I was fifteen, and one of the reviews describes this as being like that Blur song “Girls and Boys,” and I was basically sold instantly. I like to imagine that this short story collection is like a beautifully written literary version of Skins – sexy people making bad decisions that you can completely relate to.
+

(HarperCollins)
Naca’s debut volume of poetry has so much to say it can’t even pick one language; she writes in a mixture of English, Spanish, and Tagalog, often about what Publishers Weekly hilariously calls “sexual joy between women.” Her book was chosen for the National Poetry Series by Pulitzer winner Yusef Komunyakaa and she’s been compared to Neruda, which is a pretty big deal. Her poems are described as “self-consciously youthful” and are about stuff like getting high in Mexico City, which sounds a lot like us! I will predict I will love this, and you probably will too.
+

I Am Your Sister: Collected and Unpublished Writings of Audre Lorde (Transgressing Boundaries: Studies in Black Politics and Black Communities)

Hey remember in the 1960s, when all the ladies of the feminist movement were like, “i feel so empty inside as a housewife so i take tranquilizers and buy expensive kitchen appliances but all i really want is a career” and poet/activist/author Audre Lorde was like, “hey listen up, I’m a black lesbian, don’t ignore us, and btw i think the master’s tools will never dismantle the master’s house!” and then went on to pretty much change the world?

For the first time in print, I Am Your Sister offers a collection of speeches & essays by one of the most important radical black feminists ever; works grappling with sexuality, race, gender, class, arts, disease, parenting and resistance. C’mon this shit is blurbed by Ms., Adrienne Rich and Angela Davis. Here’s what Angela thinks: ‘”Audre Lorde’s unpublished writings, combined with her now classic essays, reveal her to be as relevant today as during the latter twentieth century when she first spoke to us. This new collection should be read by all who understand justice to be indivisible, embracing race, gender, sexuality, class, and beyond, and who recognize, as she so succinctly put it, that ‘there is no separate survival.” The book is part of the “Transgressing Boundaries: Studies in Black politics and Black Communities” series.
+ 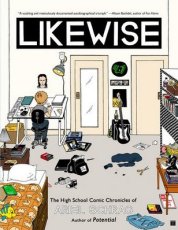 If you’re one of the many talented, awkward, emo adolescent queers who just doesn’t fit in, then you should read some fucking Schrag and feel better fast. The last installment in Ariel Schrag’s High School Comic Chronicles follows Schrag’s senior year; her first ex-girlfriend is away at college, Schrag has to figure out her own future, and she’s decided to read James Joyce’s Ulysses in her spare time. Between the masturbation and the fighting with the parents, Schrag’s obsessive documentation of her own life really pays off in this volume as she gives visual resonance to diary entries, tape recordings, comic sketches and word-docs she had going at the time. (schrag fans check out our interview with Sister Spit.

So if you wanna win big in the Lammy Awards office pool, you better go read all these books, and the rest of the nominees, right fucking now.