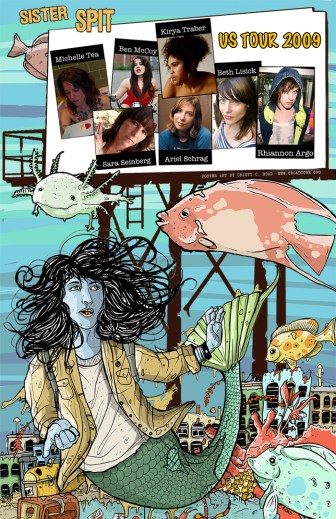 It all began on Saturday when I was reading The Phoenix New Times and saw that Sister Spit was performing at The Trunk Space on Monday. I knew I had two options: don’t go, or go alone. Why? Because I have two kids and although most parents have actual babysitters who watch children in exchange for money and food, I’m not one of those parents. I’m usually unable to attend events that happen in places other than my own backyard.

Make sense? I want to be the kind of person who could/would show up to a Sister Spit show, totally alone, and interview the performers. And I feel like I’m at a point now where I need to force myself to be who I want to be. So, after spazzing out on Twitter about my skirt, that’s exactly what I did.

The Trunk Space is a triangular-shaped room with a small stage and what we’ll call a beverage nook… There’s some social/experimental art hanging from the walls and a bunch of records that I didn’t look through, but appreciated. The Sister Spit Van had driven all day from Las Vegas, so everyone was eating their dinner behind the merch table before the show, which I found really endearing and inexplicably dangerous. I asked Sara Seinberg if it was weird to eat while people waited for her to perform and she said no. I don’t know what I expected her to say. 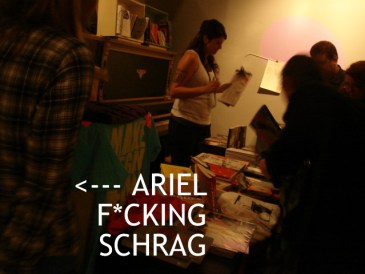 I’d read Ariel Schrag’s Awkward and Definition while sitting at the Thomas the Tank Engine table at Barnes & Noble a couple of years ago, so I was familiar with her work, but really nothing could’ve prepared me for actually buying a book from her. (It was a choose-your-own-adventure book about a horny young woman titled Sinful Cynthia. Highly recommended.) I don’t like to think of myself as a starfucker, yet there’s really no other way to describe the stupidity that washed over me the instant I made eye contact with Ariel Fucking Schrag. I won’t bore you with excruciating details. Just know that later that night, I dreamed I was back at that merch table, with Ariel Fucking Schrag, buying every book she had for sale. Dream Ariel took my money and advised, “You know, you can’t buy friendship“, which instantly jolted me awake.

Similarly, I had an idea about Michelle Tea — she has written things and I have read them, simple. No big deal. Did you know that Michelle Tea sometimes stands like a cape-less superhero? It’s true. She’s this burst of excitement and honesty, and you get the sense that she gives really great advice. I just wanted to be her best friend, you know? And I wasn’t going to try and buy her friendship, in case you were worried about that. I don’t even have any money.

The evening started with a slideshow of Sara Seinberg‘s tour photos, which was accompanied by “Larger Than Life”, by The Backstreet Boys. I think they do this to let you know, right from the beginning, that they’re having way more fun than you and that they want to inspire you to become more awesome.

Beth Lisick read a hilarious excerpt from her book, Helping Me Help Myself.

Ariel Schrag narrated the comic, Plan on the Number 7 Bus from Stuck in the Middle. Ariel also does a genius ‘homeless man on a bench’ voice.

Kirya Traber read from her chapbook, Black Chick, and I wrote one word on my notepad: MESMERIZING.

Sara Seinberg read from her upcoming book, The Madness of a Simple Red Stone, which is a modern re-telling of the Pandora myth set in modern-day New York.

Tania Katan, a Phoenix local, read a piece about her wife, which began like this: “Instead of driving by the Mormon Temple and giving them the finger, I married a Mormon woman.”

Michelle Tea read an excerpt about a queer author trying to write a crossover novel and Rhiannon Argo read from her new book, The Creamsickle, which you should totally order right this very minute.

I had an opportunity to talk to a few of the ladies after the show. This basically means that I fell all over myself trying to talk to Ariel Schrag, barely kept quiet long enough to let Kirya Traber and Rhiannon Argo answer my questions, and sat entranced as Michelle Tea spoke directly to me. Wanna read it? Sure you do!

— Next Page —
Sister Spit: The Interviews
“I think what’s important for a young person to know
is that there are modern, young people who write.”