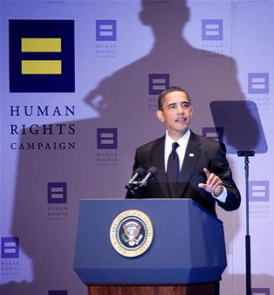 Let me confess; I’m a believer. I’m a dreamer. I imagine all the people living life in peace, and for about five minutes following Obama’s speech to the HRC last week, I believed that we would. But in the days following, compelling arguments have been made on both sides. But that’s just it — people are taking sides now. Are you an Obama believer or a critic? Do you think he’s pandering to the fancy HRC so he can take our money and run, or do you think it’s meaningful that he even offered WORDS, considering the political climate of the health care debate?

Personally, I’m somewhere in the middle. I’m critical for the same reasons the critics are: inaction on DADT, too many empty promises. We can’t say “Wait” and “now is not the time” forever, we have to fight. We need radical voices to enable moderate voices.

But on the other hand, observing straight America’s reaction to last weekend’s events has hammered home an inconvenient truth: for as long as gay rights have no direct impact on the lives of heterosexuals, we must pay attention to how often The Majority hears our demands as impatient whining. To many who don’t feel personally affected by the content of Obama’s speech, the speech sounded good enough. He did, after all, acknowledge that things are not moving as quickly as we’d like. We do know this, though: we need straight votes to win our rights and I believe we can best impact change at the ground level with other voters.

“Even for the most empathetic, liberal, passionate activists I know, our marriage rights do not, in any way, directly affect their lives. But they’re as involved as they can be, because they know us and they know what’s right. Unfortunately this is the exception, not the rule.”

Last week I attended my best friend’s wedding and my girlfriend & I were delighted to hear “I vow to keep fighting for equality so that all our friends can get married,” in the marriage vows of both bride and groom, and we felt similarly warmed by cards on every dinner table reading; “We’ve given a gift on behalf of the guests of this wedding to the Marriage Equality Campaign in Maine. We got married today, but many of our friends and loved ones are still not able to do the same. That has to change.”

In a few weeks, my other best friend’s fiancee will be moving here from overseas. When he arrives, he’ll be able to obtain citizenship via their relationship. Were they a same-sex couple, this wouldn’t be possible and they’d probably just have to break up.

Both of these friends identify as “label-free” and are the most bleeding heart liberals I know; Natalie works for a Women’s Rights NGO and writes for Autostraddle, Krista’s husband runs Moveon.org and Krista herself is literally the most politically passionate person I know; even when underemployed she donated regularly to Planned Parenthood, the HRC, and about 100 other orgs that flooded our shared mailbox with free address labels.

But they’re able to take advantage of their rights anyhow — as they should. Our biggest supporters are getting married, and we can’t. The wedding itself was a reminder that their activism is a choice, and ours is not. Even for the most empathetic, liberal, passionate activists I know, our marriage rights do not, in any way, directly affect their lives. But they’re as involved as they can be, because they know us and they know what’s right. Unfortunately this is the exception, not the rule.

Straight support of our causes is key to our success, but for a movement that continually stresses our non-impact on our fellow citizens — as Keith Olberman so powerfully asked those who voted Yes on 8, Why does this matter to you, what is it to you? — it’s not surprising that much of mainstream America hears our demands as irrelevant whining.

Because it is nothing to them. The other side has strategically unfurled a Pandora’s Box of potential viruses same-sex marriage will unleash upon schools & churches — in fact, their public campaigns rarely address their true motivations (money, fear, religious bureaucracy)  — but we haven’t done much on our side to display a treasure chest of potential charms same-sex marriage will offer our schools, churches, economy, national spirit and society. We need to make gay marriage, DADT, hate crimes laws and employee discrimination matter to straight people.

So where do we stand? Do we think Obama is full of shit? Maybe. We’re still split and I think we’ll be better able to judge in a few weeks. He hasn’t had a chance to follow through on the promises he made Friday night — the first he’s made while in office, which is different than campaign promises – ’cause he just made them! [It’s like when your Mom wants you to mow the lawn by the end of the weekend and on Saturday starts nagging you about it, and you’re like, hello, I’m doing it Sunday!]

But we lean towards the “grassroots is where it’s at” side.  We think it’s more effective for us to convince our fellow citizens that change must come so they’ll all donate to Prop 1 when they get married, too, and march with us. Obama doesn’t read our blogs, but our parents and our classmates and co-workers CAN.

So, in lieu of the typical round-up of gay media reactions to news stories, I’m gonna tell you what the mainstream media thought of last weekend so you can prepare to change people personally.

The Detroit Free Press: “With two wars, health care and the economy crowding his plate, you’d think President Barack Obama would have no room for another entrée-sized issue. In his Saturday speech to the Human Rights Campaign, the president added gay rights initiatives to his near-term agenda.”

Huffington Post’s Adele Stan: “After Obama spoke, activists focused on what they did not hear. The rest of it sounded old to them. To me, it sounded remarkably new.”

Former (Gay) US Ambassador Jim Hormel: I am as eager as anyone else to have action on the various pieces of legislation — some of which are a generation old — like ENDA (Employment Non-Discrimination Act). ENDA has been in the Senate for a literal generation. So when I exercise any restraint whatsoever — it’s out of knowledge and awareness of the atmosphere under which the president is operating.”

John Harwood: “Barack Obama is doing well with 90 precent or more of Democrats so the White House views this opposition as really part of the Internet left fringe.”

National Review Online: [it’s by Maggie Gallagher, so click at your own risk] “Pity President Obama. He’s done more, more quickly, for gay people than any president in history but it’s clearly not enough.”

New York Times: “President Obama Saturday renewed his vow to allow gay men and lesbians to serve openly in the military, but failed to offer a timetable for doing so — an omission likely to inflame critics who say he is not fighting aggressively enough for gay rights.

SOLMONESE: Joe Solmonese just keeps saying things. Like this, which is his response to a question about why diversity in the HRC: But I think that… perhaps the crowd at the dinner last night was a little bit more politically aware and had a better sense of maybe, you know, what’s at stake and what needs to be done. Way to sidestep a really important issue while simultaneously slighting everyone who couldn’t afford to be at Saturday night’s dinner. (@huffpo)

LIEBERMAN: Obama is actually talking to people on the Hill about repealing DADT. The Advocate is reporting that the administration is in direct talks with Joe Lieberman and is working to “introduce Senate legislation with bipartisan support.” (@advocate)