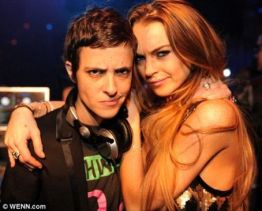 LINDSAY LOHAN: Lindsay Lohan has feelings again and once again, 140 characters just ain’t enough, she needs 280. If you’re wondering, as we always are, why Lindsay always @-replies Samantha Ronson, and Sam never @-replies Lindsay (I’m imagining my Mom reading this very serious analysis of twitter/celebrity love affairs and wondering why I spent all that money on college tuition, although really, is this so different from The Canterbury Tales, I think not), well, Lindsay says that Samro’s family is standing between them. It’s like Romeo and Juliet! Anyhow, clearly we once wrote this twitter-oversharing off as an emotional breakup, but the worse it gets, the more we can blame something a little less complicated: Many Overshare Cocktails. What is an Overshare Cocktail, you ask?  Alcohol + Uppers (amphetamines, cocaine).

Personally I hate Samantha’s brilliance too, because that seems a likely reason why she refuses to engage in public emotional fights, which would be much more interesting for us to witness. Also, Samantha Ronson can’t even spell words, so let’s not get ahead of ourselves here, re: brilliance.

HEROES:  Claire’s Lesbian Kiss on Heroes is delightful!: “But let’s get down to brass tacks, shall we?. This episode is the beginning of lesbianism on Heroes – not just one kiss, but an entire LESBIAN ARC, okay? Last night was only the beginning.” (@i09)

SISTER SPIT: Sister Spit’s Next Generation goes on the road – Laneia caught them in Phoenix, so stay on the edge of your seat ‘because we’ll be publishing her review and interviews with the whole group within the next 24 hours! (@afterellen)

BARBIE: Bet you didn’t know that flickr was a hotbed of lesbian sexual scenarios. These barbies are doing things very similar to what my barbies did. Just saying. Alternative & Lesbian Barbie Art and more lesbian barbies here. (@cityrag)

PROP 8: Jordan Catalano can read now. He read Prop 8 and he didn’t like it either: Jared Leto Gets Fired Up Over Gay Rights. (@ew)

TATU: t.a.t.u makes the list of the most sexually explicit music videos ever. (@nme)

LETTERMAN: Was David Letterman Really a Predator?: “Birkitt, while lovely, wasn’t even your typical office femme fatale. Letterman saw something in her—whether a similar comic sensibility, or just a good-natured foil—which means she’d likely have landed on the air in any event.” (@nymag)