When I came into work Tuesday and saw headline after headline exploring the leaked track “Burqa/Aura” by Lady Gaga, only one thought crossed my mind: thank god I gave up on this shit two years ago.

“Burqa/Aura” is a shot out of left field by an already washed-up pop star looking for attention. In the track, rumored to be from her next album ArtPop, Gaga plays the character of a Muslim woman wearing a burqa, and describes the experience as sexual and mysterious. While describing the burqa as an “aura,” she propositions men to look “behind the curtain.” In other words, this shit is fucked up.

The burqa is worn typically out of religious motivation and in an effort to uphold the ideal of “modesty” in the Muslim tradition, although some also wear it as a point of resistance to dominant hegemony. It’s been debated, and debated, and debated, but the final points remain the same: some women are not free to choose whether they wish to wear their burqa, but some do, and will, when they are, and for a variety of reasons. Choosing to publicly express your faith is not unknown to a lot of us; as a lapsed Catholic I know better than to judge Muslim families for putting their daughters in burqas. After all, mine gave me a cross necklace and a youth bible when I was barely 14. Religion is religion. Garb is garb. It’s not always a choice, but it’s also not always our business.

Ostensibly, Gaga’s track is an extension of her past burqa-themed exploits, including the random video of herself wearing one a fan posted to YouTube months ago and her claims to “Burqa Swag.” Both of which are out of line. Lady Gaga has no claim to wear the burqa as a fashion statement, or to make it a symbol of her own sexual identity.

I call them exploits because they pass as, for many, harmless attempts to “empower” a certain group of women – but Gaga’s empowerment is actually (surprise!) her own (readily available for purchase) validation. Instead of exploring the stories of Muslim women or women who wear burqas because they are, as she calls herself in the track, “women of choice,” she instead chooses to celebrate (read: appropriate) the burqa by completely missing the actual point in exchange for making the religious garb sexy, edgy, acceptable to a broad audience of racist Islamophobic people who loved Sex & The City 2 and didn’t cry, not even a little, at the karaoke club scene. Instead of giving insight into a heritage that already exists, she superimposes her own desires – to be seen as sexual in a specific way – onto women who never asked for it. She reduces a religious and cultural tradition to a sexual ploy; the burqa becomes a way for Gaga to seem coy and mysterious. To Lady Gaga, the burqa is a sexual accessory, instead of a garment with layers of significance that she doesn’t have the experience to understand or the right to play with. 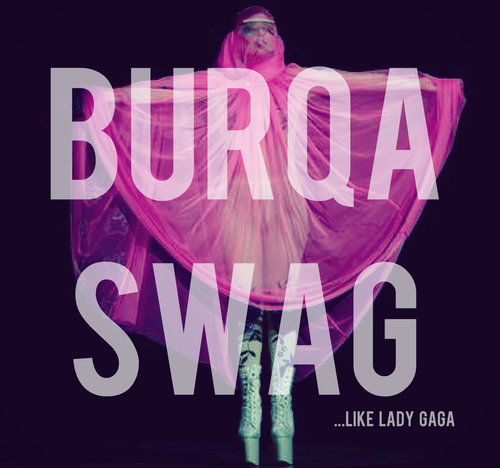 this is just wrong.

I once paid $35 to see Lady Gaga live, although she eventually went on to cancel that show and rebook for a larger venue. And I’m not saying that to be a pretentious piece of shit who knew about Gaga and was over her before you even knew the name of one of her hit singles (although I am) – it’s just to say that when I talk about her, I’m speaking as someone who followed her career relentlessly during her golden days. The Fame was all of my theme songs in a row. I was eighteen and Katrina and I wanted to remake the video for “Beautiful, Dirty, Rich” using receipts from our meal plan as dollar bills. The Fame Monster was a little bit weirder, but I was still on Gaga’s planet – she was becoming more outspoken and avant-garde, and I wasn’t even lucid enough to be freaked out that time she pretended to kill herself on stage. (The meat dress worried me, but only because I’m a vegetarian.)

It was Born This Way which ultimately forced me to step away from Gaga as an artist and an entity. I’d come out on the cusp of that album, and a part of me felt this pressure to adopt it as my “coming out album,” although I scrapped that thought entirely and listened to Pink Friday on repeat once the day actually dawned. The first time I heard the title track I waited for it to end and then asked a room probably filled with four to eight of my best friends and a cloud of smoke: “Are we serious? Gaga ‘gives the gays an album’ and it’s nothing but her shitting on a Madonna record and putting it back in the box?'” I felt duped. I was duped.

The truth about Born This Way is that nothing about it was worth celebrating, mainly because none of it was genuine and most of it was offensive in the way it capitalized on queer narratives. The album, promoted overall as some sort of ongoing LGBT song marathon in which rainbows emerged in the sky every time it was played the whole way through, was nothing more than a marketing ploy that undermined some of the most serious ideological battles LGBT folks were facing. As we challenged churches and demanded acceptance from the state, Gaga hailed us as “freaks” and positioned our deviant sexualities as diametrically opposed to religiosity and faithfulness. There’s certainly a place for espousing radical politics and rejecting assimilation, but that place isn’t in an arena with a $50 ticket price. As we cultivated a community-wide sense of pride, Gaga droned on begging us, “don’t be a drag / just be a queen.” While Gaga adhered fake bones to her face – in declaration of solidarity with us genetically modified freak shows – she was also closing up shop on a campaign to enlist us in her army during wartime. And after launching said shit-covered Madonna album, she took it upon herself to save all little queers in the land ever – so long as they were willing to worship her, join her fan club, and be her “little monsters.” Ticket sales, people! How else did you expect to find love in this fucking place? Gaga capitalized on our oppression, monetized our need for liberation, and never actually accomplished anything or helped us do so either.

On top of the failures of her half-cooked, half-baked, half-hearted effort to “save” us “weirdo queers” from the terrors of the world and middle school, Gaga put a cherry on top and also incorporated offensive, racially charged language into her LGBT anthem, sustaining the worst part of our struggle: the challenge to eliminate racism from the movement for gender equity, sexual parity, and queer liberation.

When Born This Way came out, Gaga had gone, in my book, from hero to zero: what had once seemed sweet and natural (a drive to speak on behalf of LGBT struggles) now seemed nothing but orchestrated, purposeful, and corporatized. When she was called out for speaking “for us,” the LGBT community, incorrectly, she maintained that she was bisexual and therefore had the right to capitalize on our stories. Lady Gaga’s identity is valid, and having an out bisexual woman visible in the public eye is important, but that doesn’t let her off the hook in terms of being accountable to the community she claims to represent. Her inability to grasp what kind of visibility would have been helpful in our search for a more equitable world was ultimately too much for me to even cope with. Like, seriously? Gaga was using us as pathetic main characters in a tragedy without ever addressing the real ills that made us so upset. I didn’t want to be in the army. I didn’t want to fly my freak flag. I didn’t want to make everyone else on Earth weird. I just wanted to talk to my mom about my girlfriend.

Lady Gaga failed to tell my story with Born This Way and also failed to listen, and nothing about “Burqa/Aura” proves that she plans to change her artistic process to be more inclusive, sensitive, or downright accurate in her work. For an artist supposedly interested in feminism and social justice, Gaga’s proved herself nothing more than a hostile force in race relations by refusing to respect the perspectives and lived experiences of communities of color. When Gaga claimed she could “recaim chola for us” something was wrong, as is any attempt from a non-muslim white woman to try and make “burqa swag” happen. To use her often blinding starpower as an excuse for appropriation and stereotyping is altogether more destructive than it is helpful, and any conversations that come out of this new burqa era in Gaga’s life will likely be as productive as those that came out of an oversimplified gay anthem from the same mouth – stunted from the start and without any real gain. To create real dialogue around Muslim women, or Islam, or even just the burqa itself (although that is also tired), Gaga needed to go straight to the source; instead, she went straight to a trope.

The queer community is not without its hardships when looking for solid role models. Most queer content – Gaga included – targets affluent, gay white men, and sometimes a girl gets hungry for feeling like she exists. But in 2011, I took the Lady Gaga poster off of the living room wall (and only 50 percent because it was ripped) and went looking for another hero.

I never looked back.